"The End of the Affair" 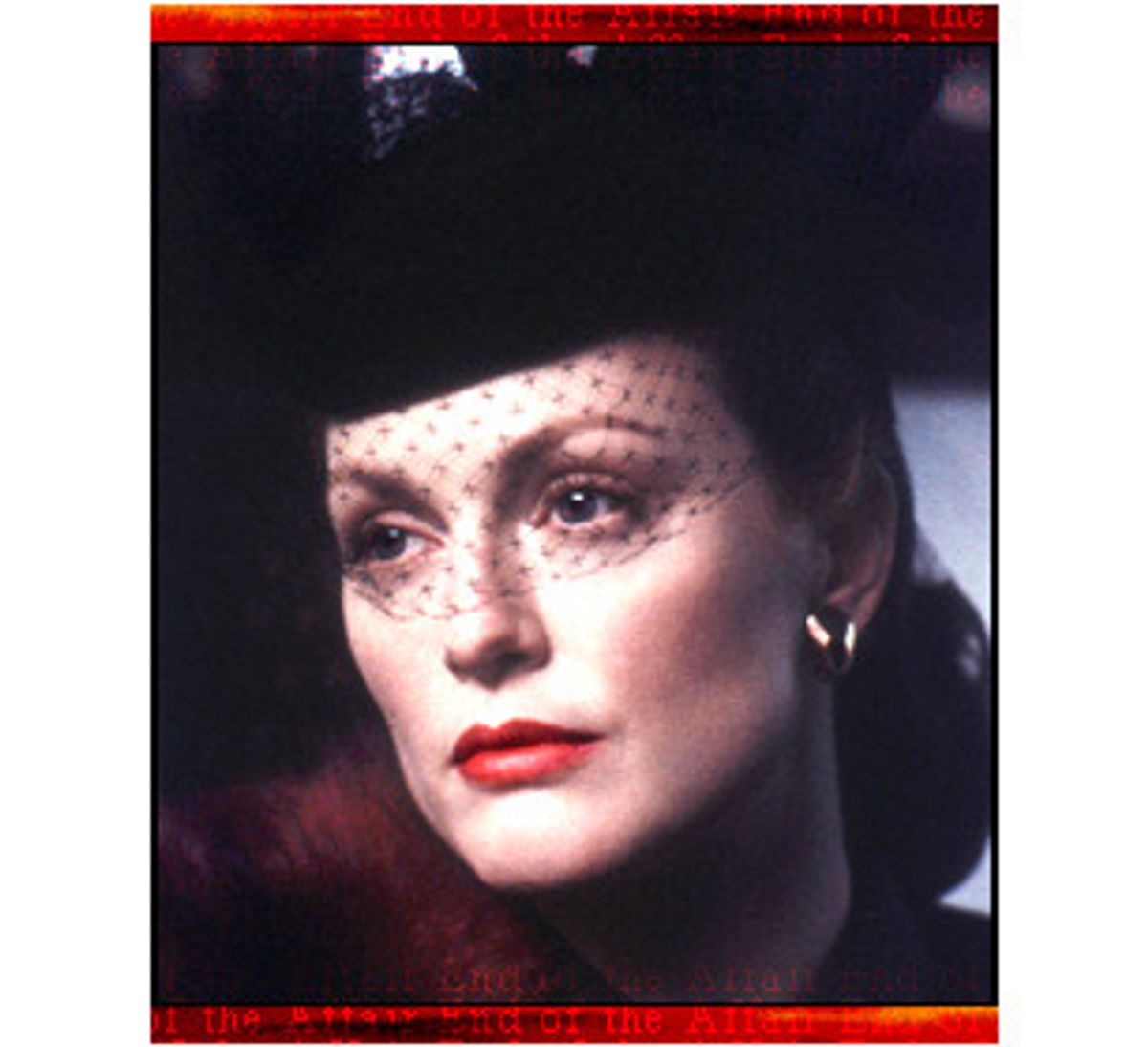 Andre Gregory, who directed Julianne Moore onstage in "Uncle Vanya," once told me that she evoked the sensuality and urgency of "a young Joan Crawford, but with more depth, more contradictions." Louis Malle, who directed her in the 1994 movie version, "Vanya on 42nd Street," said that she made him think of the greatest of all ravaged beauties, "Jeanne Moreau -- and that for me is the highest compliment."

In writer-director Neil Jordan's "The End of the Affair," a turbulent and imaginative reworking of Graham Greene's strange, classic novel about a devastating romance, Julianne Moore has a unique mixture of fire and contemplation, discipline and sublimity. She's like Aphrodite and Athena fused into one.

Moore plays Sarah Miles, a married Englishwoman who falls for saturnine novelist Maurice Bendrix (Ralph Fiennes) in wartime London, liberating herself sexually and emotionally while bombs fall and buildings crumble in the Blitz. Moore succeeds in creating a figure who changes form and color like a printed 3D image that alters when you shift it from side to side.

If she didn't, the film would fail, because Greene and Jordan have told this story as a tale of two lovers who see life in opposite ways, right down to the fervor they once shared. Bendrix narrates from the perspective of a jilted man: The movie begins two years after Sarah abruptly ended their affair. Bendrix runs into her boring but goodhearted husband, a high-level bureaucrat named Henry (Stephen Rea, of "The Crying Game"), who suspects her of seeing someone else. Henry doesn't think that Bendrix is cuckolding him -- and, of course, the novelist no longer is.

But Bendrix, who gauges depth of love by the degree of jealousy it inspires, seizes the chance to turn the screw on his own obsession. He hires a private investigator to track Sarah's wanderings -- and tells the unconvinced agency director that he's doing it on the husband's behalf. The movie has elements of a mock-detective story, but midway through, when Bendrix finds what he's after -- the explanation for his and Sarah's breakup -- it evolves into a stirring fable of death and transfiguration. Director Jordan replays scenes that were filtered through Bendrix's longing and vengefulness -- this time with a spiritual dimension that is as unexpected and disorienting for the characters as it is for the audience.

Jordan is a wildly talented, daring and intelligent filmmaker with an intriguingly diverse list of credits. (They include "Mona Lisa," "Interview with the Vampire," "Michael Collins" and "The Butcher Boy.") He's a master at setting moods too vibrant and immediate to be called wistful or nostalgic, yet too odd to be grasped instantly. He's the rare director equally taken with the seductiveness of beautiful images and the power of language to find, express or transform the truth.

Generally, I think Jordan's best stuff derives from his own original scripts -- as the legion of fans of "The Crying Game," as well as the small group of us who prefer "The Miracle," would probably agree. But for two-thirds of "The End of the Affair" he does an astonishing job of fusing his pop-magical temperament with Greene's astringency and wit. And when the movie veers from arid Greene-land into verdant Jordan territory with a carnival getaway to Brighton, all one's objections dissolve under the spell of Moore's performance. (As a director of actresses, Jordan has few peers.) I'd put "The End of the Affair" just beneath the top rung of Jordan movies or Greene-based films (it's no "The Fallen Idol" or "The Third Man"), with Moore the critical element that makes it necessary viewing.

Jordan generates risky, rancorous comedy from the gulf between Bendrix's heightened erotic recollections and his lowdown pursuit of payback. Bendrix's unlikely lieutenants are a clumsy, empathic gumshoe and his apprentice son, a solemn, alert young boy with a birthmark that covers a whole side of his face. Jordan glides with remarkable assurance between past and present and among multiple points of view. Giving a charge to the film's broodingly intellectual brand of farce is the psychic rift common to betrayed lovers everywhere. On the one hand, Bendrix wants to pigeonhole Sarah as a banal straying lovebird. On the other, he would die to retain her as an amorous ideal.

This soft-boiled dick Parkis (Ian Hart) and his son Lance (Samuel Bould) conduct an investigation that parodies a just-the-facts approach to human relationships. It tells its own cautionary tale about the perils of circumstantial evidence, and becomes both touching and delicious, as Parkis and Lance begin to appreciate Sarah's worth beyond her seemingly sordid appointments and confessions. The way Jordan has tweaked the story, everything about these two comic, feeling creatures -- including Lance's birthmark -- mocks or shames Bendrix's cynicism.

Fiennes is remarkable at capturing the sensibility of a creepily smart novelist who luxuriates in anguish and is intent on worrying out feelings and incidents that defy rationalization. But Fiennes operates at a disadvantage, since his character comes through largely in narration. (Greene nicknamed the first-person novel his "I" book.) No matter how admirably Jordan distills Bendrix's and Greene's thoughts about, say, London on the eve of war, the director doesn't replicate the vortex of observations that suck the novel's readers into Bendrix's tortured consciousness.

But Jordan keeps even the thinner sections of the film compelling. He makes it clear that Bendrix is a prisoner of a worldly worldview -- and that he wants to jail Sarah, too, within his perceptions of her. And in casting Moore, Jordan has found an actress who can wriggle free of Bendrix's perceptions and our preconceptions without breaking character. She's a strong woman, yet unprepared for a journey that leads her from arousal to renunciation -- and then to an acceptance of God and her own holiness.

In Moore's hands, Sarah is both a coherent and an almost contradictory figure, balancing qualities of containment and spontaneity. During their initial flirtation and first date, something in the way she moves attracts Bendrix like no other lover, though to the casual onlooker she could seem simply gracious and organized. When she achieves orgasm, it isn't with a playful "When-Harry-Met-Sally" moan but with a piercing cry; and when her husband picks that moment to come home, she has the wit to reassure Bendrix that Henry wouldn't recognize the sound. Even during her and Bendrix's awful fights about the nature of love and her marriage to Henry, Moore conveys something hard and crucial -- an ecstatic peace. Then, in one terrifying moment, Sarah's peace is shattered, and Moore comes to embody bereavement and sacrifice. In spite of herself, she is transformed into a tragic heroine.

To detail what happens would rob the film of a critical turnaround. Sarah prays for a miracle, and gets more than she feared or hoped for. In reshaping the final section of the book, Jordan downplays explicit theological arguments and allows Bendrix and Sarah to share fleeting moments of doomed joy and emotional reconciliation. He conflates a couple of characters and shuffles around a marvel and an epiphany. But the film holds true to the war Bendrix wages in the book against Sarah's acceptance of a Catholic view of the universe, and his weary recognition of a God he hates is as hard-fought as Greene dramatized.

Jordan embodies the religious dialectic more firmly in the central characters: Bendrix becomes, in the film, the story's sole voice of disbelief. As a result, audiences of all kinds may find it easier to recognize in this tale not just the force of belief and the wonder of transcendence, but also the humbling difficulty of absorbing it. In general, Jordan's casting and directing choices open up the story in the best way -- to expanded human possibilities. Henry pitilessly owns up to his own shortcomings and doesn't limit his wife or Bendrix to an aggrieved husband's view of them -- and Rea, in a quietly magnificent performance, fills up this hollow man with a pure and pliant spirit. Hart and Bould pull off the equivalent feat of keeping Parkis and Lance from becoming mere lovable clowns. They have their own magnanimity and dignity -- even a skewed heroism -- that makes them more deeply funny.

After the bracing pure cinema of his horror film "In Dreams" (which was unfairly dumped, and dumped-on, earlier this year), Jordan works to serve the material. He comes up with glancing master-strokes, like the fairy-tale first sight we get of the Blitz, with a bomb puffing a domed building in the distance, or the simple, intuitive shifts in camera angles that express the chasm between Bendrix's and Sarah's points of view.

Most important, Jordan provides Julianne Moore with a superb showcase. Some "serious" movie critics are too often prone to overvaluing directors and writers and undervaluing performers. In a major role like this one, an actor as great as Moore can be an auteur, too. In many ways Sarah couldn't be more different from Yelena in "Uncle Vanya." Yet Moore's protean creativity, and her uncanny fix on what is ambiguous and paradoxical, link and elevate the two characters. What Andre Gregory told me about her stage performance in "Vanya" fits several of her crisis points in "The End of the Affair": "What she's showing is a person who doesn't believe she has the capacity to feel, so when she laughs or cries there's a choking hysteria about it." Moore's Sarah, like her Yelena, "seems like a candle that's desperately trying to stay lit -- or the gold on the last leaves of autumn when winter is coming."