"How Good Is David Mamet, Anyway?" by John Heilpern

A passionate critic tosses a few firebombs at the New York theater. 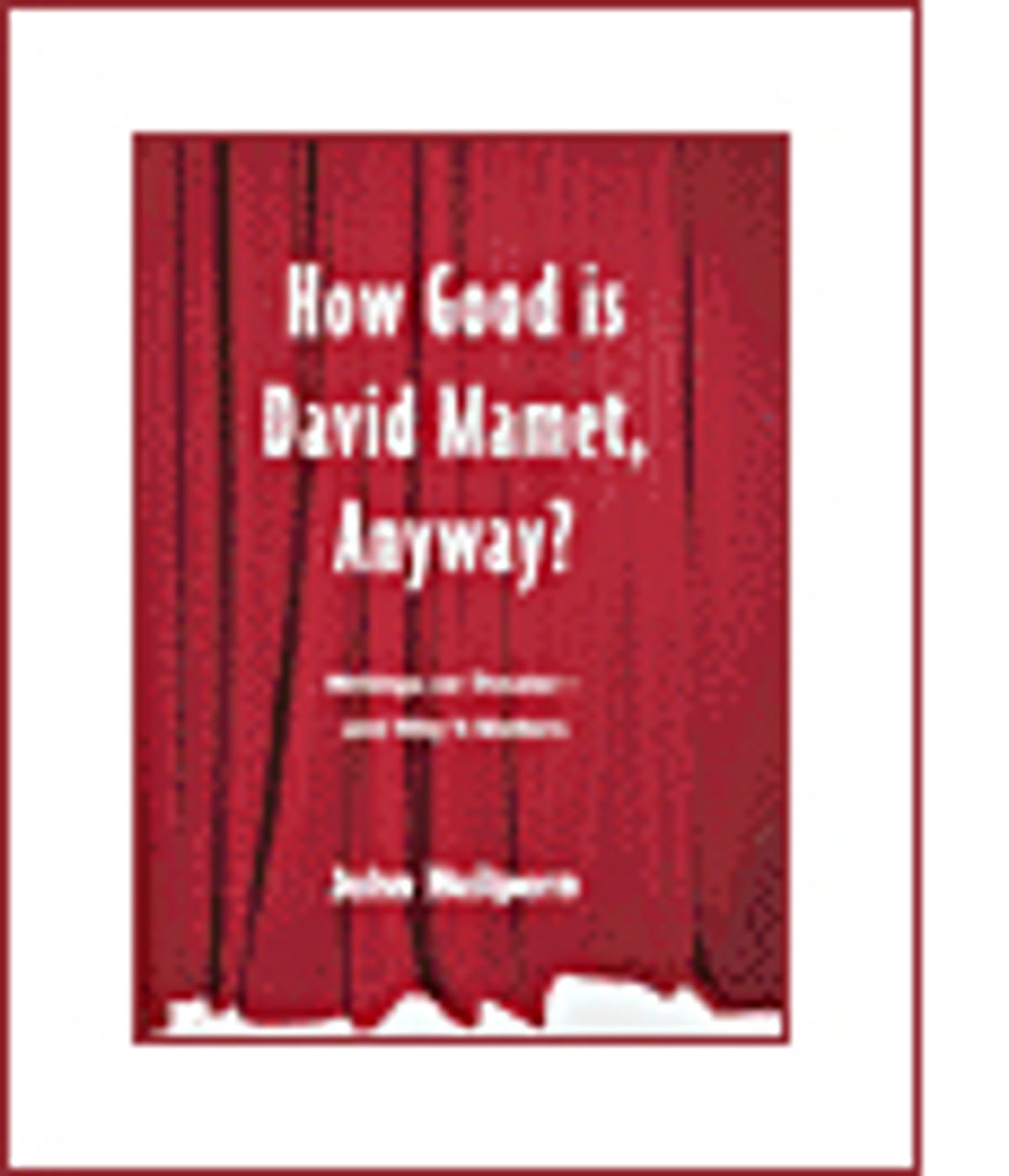 I'm not sure John Heilpern can convince the world that theater matters; that task may be beyond even his abilities. But "How Good Is David Mamet, Anyway?" -- a new collection of reviews and essays drawn from Heilpern's estimable career as a theater critic on both sides of the Atlantic -- will certainly convince you that theater matters to him.

Heilpern is as erudite and sophisticated as you'd expect an Oxford man who worked under Peter Hall at the Royal National Theatre to be, but his greatest merit as a critic may be his refusal to let intelligence get in the way of enthusiasm. When he loves a show, he simply loves it, losing all fear of being thought unsubtle or indiscriminating. "And what a treat it was!" he exclaims in his eulogy for the Lincoln Center production of "Carousel." Of Yasmina Reza's Broadway hit "Art," he writes, "We can't be friends anymore if you don't enjoy 'Art.'"

A handful of the pieces in "How Good Is David Mamet, Anyway?" -- including a hilarious transcript of a lunch date with John Gielgud and Ralph Richardson -- go back to the 1970s, when Heilpern was a feature writer for the Observer in London. Most, however, come from his current gig as drama critic for the New York Observer, where he has worked since 1992. Virtually every major New York play of the '90s is covered herein, from "Angels in America," "Ragtime," "Arcadia" and "The Lion King" right up to this year's revivals of "Death of a Salesman" and "The Iceman Cometh." Even when I find myself disagreeing with Heilpern's judgment (on Mamet's "The Cryptogram," for instance, or on Janet McTeer's Nora in "A Doll's House," both of which he dislikes), his clear thinking, deceptively breezy prose and infectious, generous wit are consistently delightful.

Moreover, Heilpern has his priorities straight whether you agree with his verdicts or not. He wants pleasure, yes; he makes it clear that he sees theater as a symbolic arena, not a force for ending war or poverty. But he values bravery, ambition and seriousness of purpose over spectacle and attitude. It's easy enough to opine that Tony Kushner's "Angels in America" and Tom Stoppard's "Arcadia" were this decade's greatest plays, but Heilpern is not afraid of chancier choices. I'm not sure he's right that Suzan-Lori Parks' "The America Play" is great theater, but I've had to reconsider my reaction in the light of the extraordinary prose poem the play calls forth from him: "Search for the true. Dig, weep, dig, weep, fake, dig. Spade, paw, pah, haw! haw! haw! Look on the bright side! Shoot, black hole, hole in the head. So much to live for! In this sweet land of liberty."

As in that example, Heilpern's best writing offers many of the strange, almost religious delights of an evening at the theater. He is not mean very often, and when he is he can be self-mocking -- "What else can I complain about?" he asks when he has finished savaging the Diana Rigg "Medea." Mamet's most ardent defenders will find Heilpern's parody both telling and irresistible: "Well, hell, look at it: um um, Mametspeak, I mean, it's, it's ... there to, to -- what's the word? To reveal ... conceal the ... um ... What? ... meaning." I found his bemused tolerance of Karen Finley's "The American Chestnut" even funnier. Finley, he reports, "has also been known to shove yams up her ass. I don't know how I feel about that." Later in the same review, annoyed by Finley's lack of anything approaching theatrical professionalism, he suggests that "it's understandable to think: 'Speak up, dear! Project!' In such irritating ways, Ms. Finley can turn a libertarian into a disapproving, half-deaf old fusspot."

Finally, American playwrights and audiences owe Heilpern a great debt, whether they know it or not, for being the only New York critic of stature to resist the recent tide of unthinking Anglophilia. It helps, of course, that Heilpern is an Englishman who passionately loves the great tradition of British theater -- which means he can tell when the Brits are trying to dump a load of rubbish on the stupid colonials. His attacks on the Rigg "Medea" and Ian McKellen's bewildering "Richard III" are bracing examples of his skepticism. But as Heilpern says in an angry essay near the end of the book, the real problem is not British theater, much of which remains terrific, but that the British conquest of the Manhattan stage could not have happened without a "shocking display of Anglophilia" from the New York Times and Broadway's leading producers, who "buy anything stamped with the English Good Housekeeping Seal of Approval."

I shouldn't spoil the pleasures of reading "How Good Is David Mamet, Anyway?" any further. It's more than a collection of witty essays or a defense of a seemingly archaic art form. It's a testament that, as Heilpern writes of a performance by Judi Dench, "speaks to us of such a profound belief in theater that it amounts to a religion, a mysterious renewal, a way of life."