Kate Winslet smolders, but the rest of the cast evaporates in Jane Campion's tale of sex and spirituality. 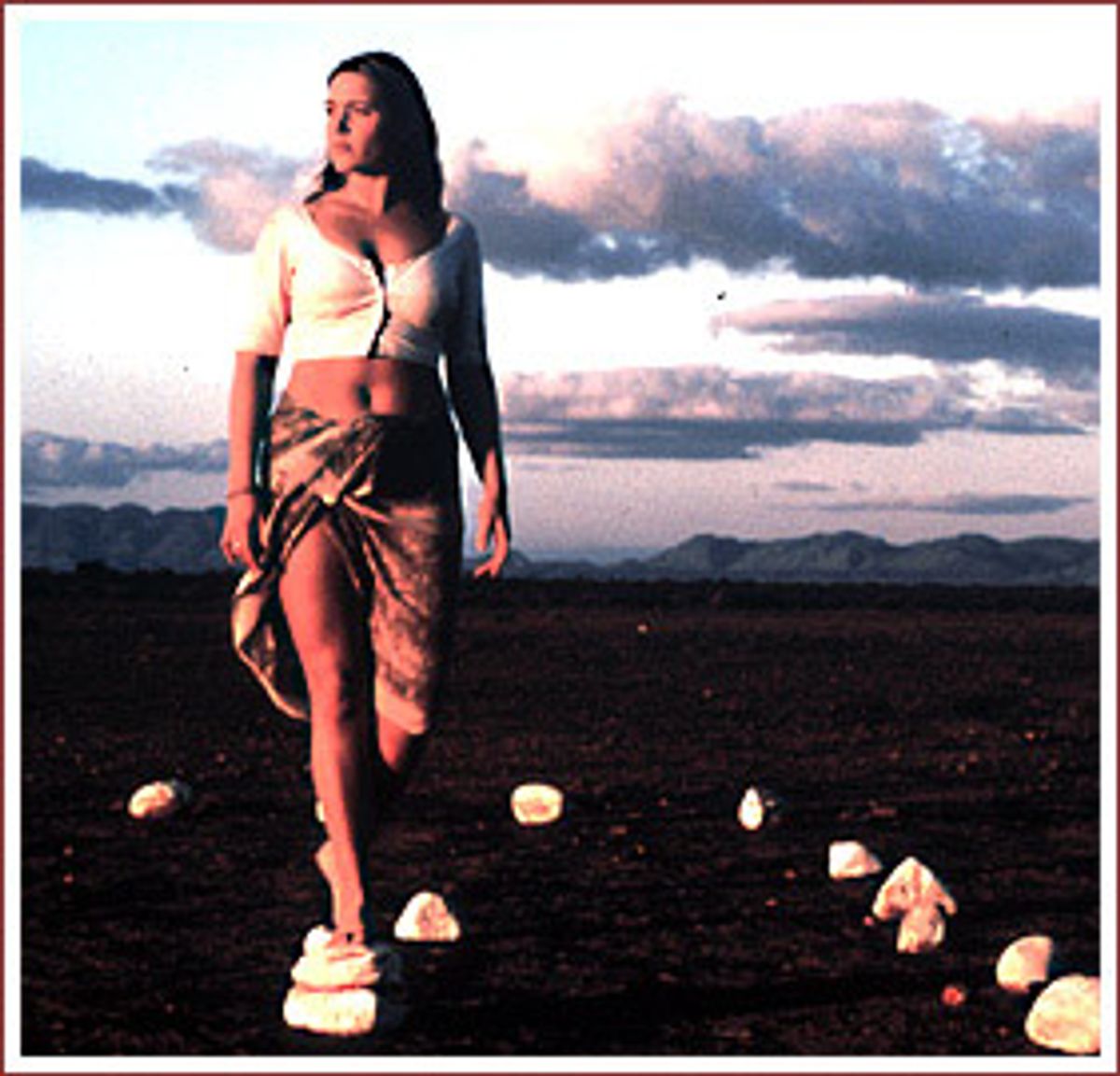 No one could ever accuse Jane Campion, the director of "Sweetie," "Portrait of a Lady" and "The Piano," of not knowing her way around offbeat heroines. At the center of her films are the kind of strong, sexually charged females who always prove to be too much for their stuffy communities, and God knows the cinema could use more of them. But will Campion ever deliver a male character who's a match for one of her women?

"Holy Smoke" is being touted as a sardonic twist on the old battle of the
sexes, but it's neither as original nor witty as it thinks it is. Contests
aren't very compelling when it's clear from Round 1 who has the upper
hand, and from the moment Kate Winslet (most lately of "Hideous
Kinky") struts on-screen, cutting a wide swath through crowded Indian streets as Neil Diamond's "Holy Holy" swells on the soundtrack, there isn't a doubt in the viewer's mind who will win the final showdown.

Winslet plays Ruth Barron, a lively Australian lass who, for reasons never
fully explained, takes a jaunt to India and winds up undergoing an
unexpected spiritual transformation. Ruth returns home thinking she's found the one true path; her friends and family think she's the victim of "some sort of freaky hypnotism." The truth lies somewhere in between,
and it's a credit to the film that it leaves the mysteries of Ruth's
newfound piety ambiguous. Because we don't see Ruth or her world before her life-changing journey, we're left to make our own decisions about what's really going on behind those steely blue eyes. One thing's for certain -- she's not the girl she used to be, and the folks at home are not happy.

Enter Harvey Keitel as P.J. Waters, the best deprogrammer in the religious-fanatic business. How Ruth's decidedly down-market, dog-grooming clan
scrapes up an astronomical sum to bring the American to their remote
little outback compound is never explained. Even more puzzling is P.J. himself. With his slick, overdyed locks, cowboy boots and porn star mustache, he hardly looks the part of a brilliant breaker of wills and restorer of souls. He looks instead like a sleazy, aging lech -- which is exactly what he turns out to be. That Ruth sees through him right away and promptly turns the tables isn't surprising. That nobody else has any doubts about the oily interventionist in their midst is a little more difficult to grasp.

Part of the problem may be that director Campion, who co-wrote the script
with her sister Anna, appears to have spent so much time and energy creating Ruth that she didn't have anything left over for rest of the
characters. Ruth's mum (the admirably subtle Julie Hamilton) has a few
moments of conflicted panic mulling over whether the tough-love strategy is helping or harming her daughter, but the rest of the family is nothing more than a goofy collection of waterbed-sloshing, beer-drinking vulgarians with deep tans and bad hair. And P.J., who never met a blow job he could turn down, fits right in. Only Ruth, dancing cheerfully to Alanis Morrisette in her billowing, pristine sari, seems out of step. Can you blame her for not
wanting to be restored to the bosom of such a motley group? The
joke is that the Barron family is as blindly intoxicated with P.J. as Ruth is with her guru. It's the sort of thing that passes for comic relief in "Holy Smoke," but it comes across instead as simplistic and mean-spirited.

Initially shocked that her family would call in an expert to fix her when
she's never felt less broken, Ruth quickly shifts gears and decides to have a
little fun with the whole cruel-to-be-kind thing. She and P.J. head out to a remote cabin for what's intended to be three days of intensive psyche-shifting, but rapidly devolves into an out-of-control lost weekend of lust, tears, surprising bursts of violence and, eventually, Harvey Keitel
wandering the barren plains in a red dress and lipstick.

The latter is a memorable image, but what does it mean? Campion wants us to believe that P.J. shakes Ruth's foundations as much as she does his, but Keitel is never sharp or smart enough here to make it seem possible. He's just a sad little man manipulated by a sexy, pretty young woman. Breaking P.J.'s will turns out to be about as difficult as gluing on a new bindi, and if it's just slightly more dangerous, Ruth never looks like she can't handle it. The complicated, contemplative Ruth seems more capable of deprogramming herself than her expensive expert is. What drags her into the agony of doubt isn't P.J.'s wisdom or even his vulnerability, but the forced acknowledgement of her own pettiness.

At the onset of their ordeal, Ruth tells P.J. he'll never break her. But
she doesn't count on the possibility of breaking herself. It's a compelling
idea, and Winslet (who keeps getting better and better with every film)
looks like she's having a grand time running with it. She brings a cool
serenity to Ruth's early scenes of religious ecstasy, a convincing glimpse
of what looks like true bliss. And her devastation when the luster on her
ecstasy starts to fade is heartbreaking enough to make one wonder what's
so great about the real world anyway.

But aside from tacky furniture and overprocessed hairdos, what is Ruth really at odds with here? We never get inside her mind enough to know how formidable her personal demons are, and all we see of the exterior ones is a shabby, easily mowed down posse led by a middle-aged Yank in mirrored sunglasses. (Even in pro wrestling, you're supposed
to make it look like a fair fight.) Kate Winslet is a mesmerizing force in her own right, but too much of "Holy Smoke" turns out to be hot air. There's got to be more to a holy war of the sexes than this.