For a longtime resident, Seattle's last few tumultuous days seem to have come straight from the Book of Revelation. 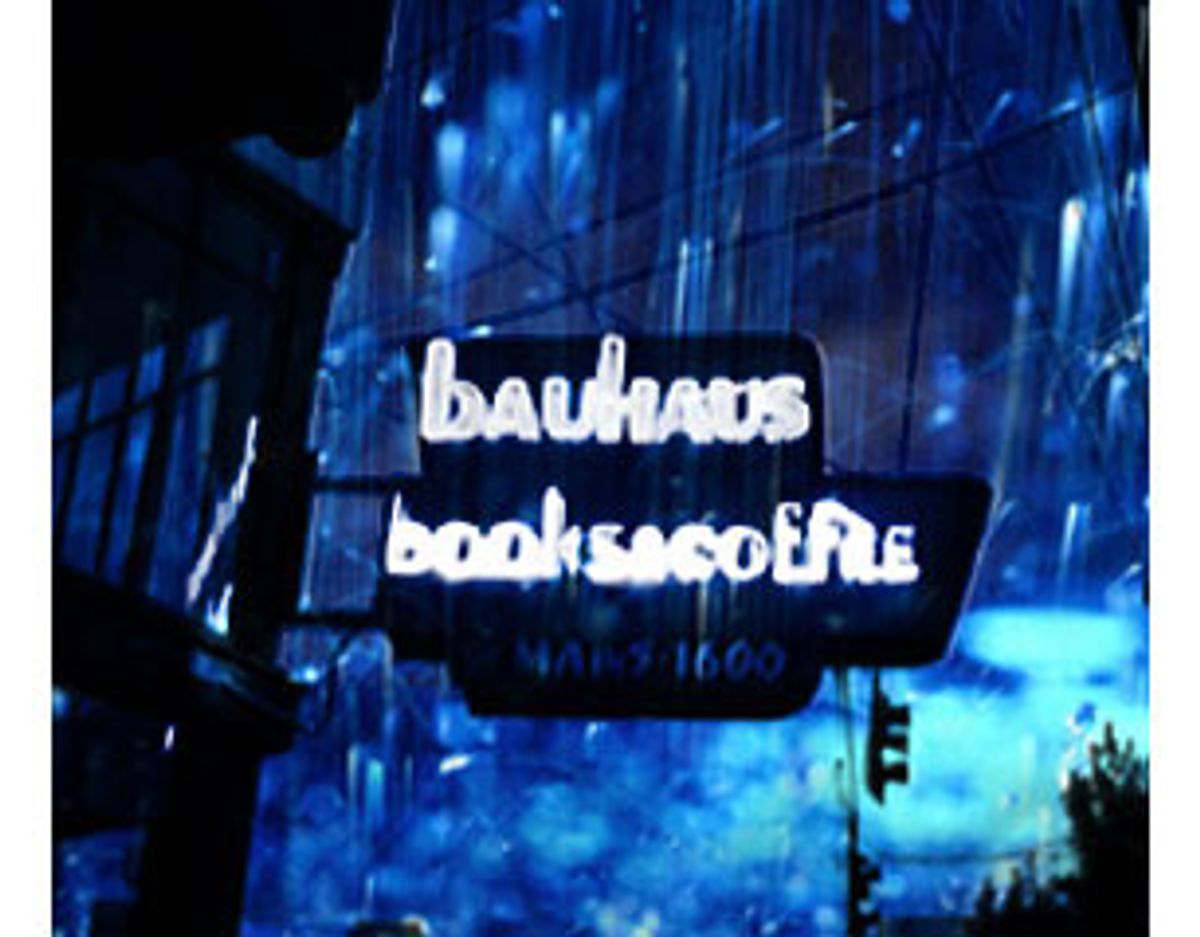 Maybe it's not the apocalypse we had anticipated, but here, among Seattle's seven hills, as the hours slog toward the new millennium in fits of chill rain, as a cathedral light filters through late-fall clouds onto a cityscape of fire, gas plumes and impassioned, chanting routs, a lot of us are feeling bound in our own Book of Revelation.

A spirit that had been dozing complacently here for most of the past 80 years or so -- resting beneath the rhododendrons, mellowing among the blackberry brambles, lolling in latte foam with all the polite civility and self-satisfaction that Seattle has come to represent lately -- has reawakened for the moment. The sword it brandishes may not be a fiery one, exactly, but it's showing a distinct glow this week.

Behind veils of secrecy and protocol and prerogative, more than 5,000 delegates from the 135 member and 38 observer states of the World Trade Organization are meeting at the downtown convention center. They've come to celebrate the righteousness of capitalism and the riches of commerce, to debate rules for the barter and chop that they trust will bring the new order closer to its hour of fulfillment. The WTO -- successor of the International Trade Organization of the late 1940s, the git of GATT -- has come to this emerald Babylon to set a mark on the world's forests and seas, factories and farms and bazaars. As it says in the Book of Revelation: "And no one, great and small, rich and poor, slave and free, will be allowed to buy or sell unless he bears this mark, either name or number."

At least that's how it looks to the scores of thousands who have gathered in the streets for the Battle of Seattle, to stand against the WTO dragon, to drum and dance and shout (with the sound of seven thunders) about the cost of the "global economy" to the environment, workers' rights and social and cultural equity. To many, what began as an earnest expression of protest and a dramatic plea for dialogue has, in the face of police action, become something more basic and sadly desperate. A good vs. evil thing. A fight for survival between the fittest and the fattest.

Myriads upon myriads there are, thousands upon thousands, and they cried aloud:

"No, no, WTO! Justice for farmers! Justice for workers! Mobilization not globalization! The streets are ours!" Nearly 500 have been arrested since Tuesday. Thousands of other protesters and bystanders have been gassed by police, stunned by flash-bang grenades, doused with pepper spray, thudded and bruised by rubber bullets both inside and outside the 15-block security/curfew zone around the convention center.

For many of us who live here and who have been in the fray even for a little while, as participants or observers, the new snow in the mountains, the first big storm of the season, will have less than its usual purifying effect. The white peaks of the Cascades to the east and the Olympics to the west, the ice coating the firs and ferns, tend to bring a calm to the city, a slow and sleepy forgetfulness that will cradle us through to a new year and a fresh start. But for many of us this year, the cloud cover will instead remind us of tear gas.

Burning before the throne were several flaming torches, and in front of it stretched what seemed a sea of glass, like a sheet of ice.

The first day, with only a few exceptions, an almost polite equilibrium, a laissez-faire face-off of sorts, was maintained between the protesters and the police. This is Seattle, after all. Tear gas did sweep the street at Sixth and Union to provide convention center access for delegates; that was to be expected, part of the dance. But at intersections only a block or two away, police stood placidly, their face-shields raised and their nightsticks holstered in goodwill, as protesters clogged and drummed and chanted slogans for turtles and trees.

The big AFL-CIO march, with 30,000 or so participants, snaked through town without incident, and with precious little press coverage. Seattle has always been a union town. There's a kind of racial memory here, running under both blue collars and white ones, among folks who have made more than a short-term career move to the city. In the early part of the century, this was Wobblies territory, where loggers and lumber companies fought pitched battles over union rights and wages. The famous Everett Massacre of 1916 took place 30 miles north, when International Workers of the World organizers and their supporters from Seattle were shot by sheriff's deputies and company goons. Three years later, a general strike -- the nation's first -- by more than 60,000 workers paralyzed Seattle, then
faded placidly into iconic memory. The city's waterfront has remained a bastion of union sentiment even through the past two decades when a new order -- the service economy, the corporate revolution, technocracy and globalization -- began to poise itself for the third millennium.

In bars around town, where interest in the live coverage of the WTO protests has preempted even reruns of dirt-bike races, the locals seemed to have little sympathy for the protesters. Tuesday morning at the Coins, a few blocks north of downtown, a tableful of guys were chuckling as the first canisters of tear gas arced into the crowd outside the convention center. "Look at those suckers run. Can't take it, can ya? Little bit of street cleaning goin' on, is there?" Maybe it was the lattes or the wild mushroom omelets talking, but an hour later, the catcalls had softened a bit. "Yeah, but the sincere ones, they're OK, y'know. They got a right, y'know."

And there, as I looked, was a black horse, and its rider held in his hand a pair of scales. And I heard what sounded like a voice from the midst of the living creatures, which said, "A whole day's wage for a quart of flour, a whole day's wage for three quarts of barley-meal! But spare the olive and the vine ... "

This is Seattle. The mayor and the police chief spoke about protecting the rights of everyone in town for WTO, pooh-bahs and proletariat alike -- until late Tuesday afternoon and early evening, when a relative handful of outlaws, "anarchists in black clothes and black masks" in the words of authorities and breathless television anchors, stormed through downtown blocks and broke windows at the Gap, McDonald's, Nike, Starbucks. The vandalism caught police, admittedly, flatfooted.

Christmas lights twinkled like stars on storefronts. The mayor declared an emergency and set a curfew ("Hear, you who have ears to hear"), and city and county riot squads, bent on saving some face and scoring a few pounds of flesh, advanced with gas, truncheons and pepper spray on peaceful gatherings blocking intersections in a perimeter around the city center, rousting even those who were trying to douse impromptu bonfires with squeeze bottles of Evian water.

Neighborhood residents, too, brought bottles of water to those suffering from the tear gas. When they were done, some of the protesters flung the bottles at police or through nearby store windows. "That's not what we meant!" the Samaritans wailed.

A few folks at the fringes, coughing and trying to rinse the burn from their eyes, felt old fires smolder in their bellies, remembering the same kind of painful assault on their sensibilities during marches in the late '60s and early '70s. Seattle and the Pacific Northwest had been a way station for some of the disenchanted and the draft-dodging idealists trickling toward Canada during the Vietnam War. Some were in this crowd, and some of their children were.

Rumors began circulating almost immediately that federal authorities had put a little pressure on the locals to put things in better order. ("A voice, speaking like a trumpet, said, 'Come up here and I will show you what must happen hereafter.'")

By Wednesday, the mayor had expanded his directive, declaring downtown a "protest-free zone," suspending what even the most earnestly nonviolent of the protesters insisted upon as their right to free expression. Wednesday night, police and national guard troops, clearing downtown, pushed the protesters east, up to Capitol Hill, a mile outside the zone. But there, on cosmopolitan, politically active Broadway, a gathering unrelated to WTO was getting under way, an anti-death penalty march focusing on the case of Mumia Abu-Jamal in Pennsylvania. This was Seattle, after all.

A couple hundred people were in the crowd when police -- without any warning that marchers or bystanders could report -- started lobbing tear gas, punching nightsticks into bellies, shoving and pursuing individuals down side streets. The reports from the scene were consistent. A man using a walker, a neighborhood resident, was shoved aside. A couple of young women, just coming out onto the street from their house, were doused with pepper spray at close range. A county councilman, placing himself between police and the crowd, attempted to calm the situation; he backed off, shaking his head, when he was hit with the tear gas.

The same night, a Seattle city councilman on his way to a WTO reception was stopped downtown and pulled from his car by police, restrained and nearly cuffed. The councilman, Richard McIver, is African-American. "I don't want to aid the hooligans who are raising hell and I don't want to take on specific officers," he commented to a reporter the next morning. "But there are huge flaws with the officers when it comes to people of color. I'm 58 years old. I had on a $400 suit, but last night, I was just another nigger."

But this is Seattle, polite and civil, cool and, in the end, determinedly satisfied with its righteousness. The mayor has offered his apologies for any unwarranted injuries and stress visited on the innocent. A peaceful vigil by 500 protesters outside County Jail didn't lead to release of those arrested, but calm, courteous negotiations did result in permission for lawyers to visit the detainees, and the crowd dispersed quietly. Seattle's civility can be contagious. Late Thursday and on Friday, police and demonstrators were nodding politely to one another again. Among marchers' anti-WTO signs, a few now say, nicely, "Keep smiling."

The City Council is forming an oversight committee to review not so much the actions of police, according to one statement by a council member, but the policies that led to the Capitol Hill incident and other "possible" overenthusiastic responses to the people on the streets. We will fret. Fretting is central to our politeness and our politics.

But for many, when the hand-wringing is done, some bitterness will remain, the taste of tears and pepper. For some, perhaps these aren't the end times, but just the beginning.

These are the words of the Amen ... I know all your ways; you are neither hot nor cold. How I wish you were either hot or cold! But because you are lukewarm, neither hot nor cold, I will spit you out of my mouth. You say, "How rich I am! And how well I have done! I have everything I want." In fact, though you do not know it, you are the most pitiful wretch, poor, blind and naked ... All whom I love I reprove and discipline. Be on your mettle therefore.

Jim Molnar is a writer and editor who has lived in Seattle for 20 years.