The game show for everyone, where no contestant is ever wrong! 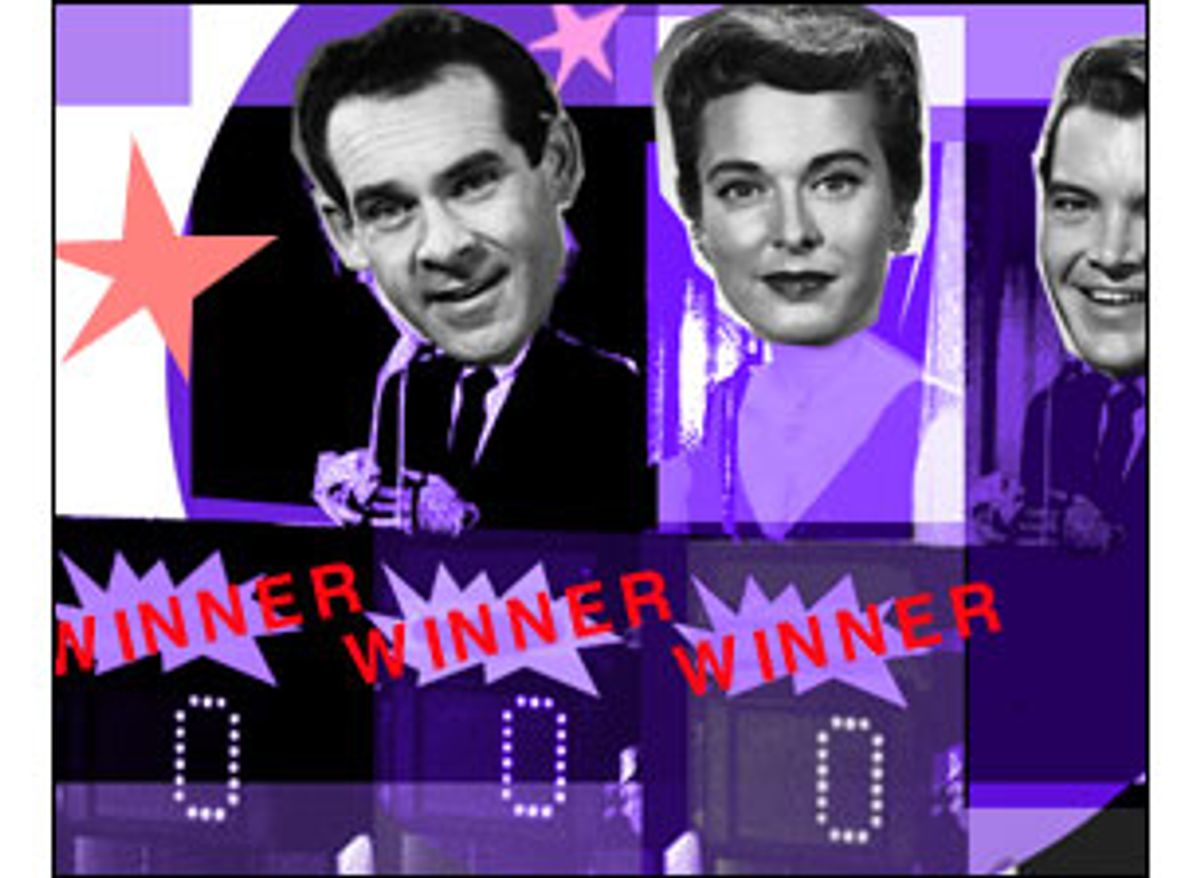 Do you know the meaning of polytheist? That question was worth $400 on "Jeopardy!" and $500,000 on "Who Wants to Be a Millionaire." Guess which show is more popular?

Goaded by the success of "Millionaire," all of the networks are concocting quiz shows with big prizes and "accessible" questions. "Accessible" is the studio euphemism for stupid.

For example, in the '50s, HUAC's Hollywood quiz grilled John Garfield on whether he preferred Franco or Trotsky. Now HUAC would ask Keanu Reeves if he knew the location of the Spanish Civil War. Of course, Keanu still might get it wrong, and that would just make the whole thing seem cruel.

Let's have a game show that is truly accessible and completely compassionate. I happen to have invented one: "It's All Right!" is the game with only right answers. No contestant would ever be truly wrong: just "factually diverse." Objective answers will receive fabulous prizes; subjective answers will receive fabulous prizes and counseling. The perfect host for this caring format would be Oprah Winfrey, although she would have to let the contestants get a word in edgewise.

Ready to test your knowledge and psyche? Now that you know the rules ...

2. Which of these colleges is the northernmost?


3. In the musical "Oklahoma," what is the peddler?


4. Which one of these items would you most likely find on Edith Wharton's chair?


5. Which one of these television shows is based on a Dostoevski novel?

a. "The Mary Tyler Moore Show"

6. In which field is Boyle's Law applicable?


7. Which city was a capital for the longest continuous period of time?


8. In the film "Casablanca," what Aryan ditty did Nazi Maj. Strasser sing in Rick's American Cafi?

1. Georgia was named for George II (answer b). Of course, George II was named for his father, George I (a); without George I, the state might have been named Stuart. However, naming the state for Gershwin (c) would have been a fitting thanks for the composer of "Swanee" as well as a necessary apology for the Leo Frank case. Nonetheless, Washington (d) is the only George who counts in American history, and the dollar bill proves it.

2. McGill (answer b), in Quebec, is the northernmost. Being Ivy League, Dartmouth (a) wouldn't acknowledge the other schools as
colleges. Northwestern (c) has the most Northern name. The University of Minnesota (d) has the most Nordic students.

3. The peddler is Persian (answer b). Of course, the peddler is really Jewish (a); he just claims to be Persian. (In the original Broadway production, the self-proclaimed Persian had a Yiddish accent.) However, an Armenian (c) is a good compromise between a Persian and a Jew. Nonetheless, real Americans would prefer Amway (d).

4. An antimacassar (answer b) is the Episcopalian term for a furniture cover. Of course, Mrs. Wharton would need one because of her Pekinese (a). However, the modern museum curator would use Scotchgard (c) to protect the furniture from slovenly Ph.D. candidates (d).

5. "Bonanza" (answer b) is really "The Brothers Karamazov"; you noticed the correlation between Dmitri and Little Joe, Ivan and Adam, Alexei and Hoss, and Smerdyakov and Hop Sing. "The Mary Tyler Moore Show "(a) is "The Idiot"; surrounded by fools and bullies, our messianic title character redeems us through grace and suffering. In "The Possessed" a group of self-absorbing babbling brats are nihilists; in "Friends" (c), they are hipsters. "Saturday Night Live" (d) is certainly "Crime and Punishment." The show attempts to commit the perfect satire but only manages to bludgeon the audience.

6. Boyle thought that it was chemistry (answer b). Of course, a formula calculating heat, pressure and expansion could apply to both economics (a) and dermatology (c). Furthermore, it also applies to demographics (d) given the population growth in warmer climates.

7. For nearly 16 centuries, Constantinople (answer b) was the capital of something: first, the infamous Byzantine Empire and then the infamous Ottoman Empire. For 11 centuries, however, Kyoto (a), was the capital of a continuous culture. London (c) has been a capital for nine centuries, and it still is one; so it might last longer than the others. Between the Caesars and the popes, Rome (d) has been the center of an empire for 2,500 years; if you don't think the church is an empire, you don't know the Jesuits.

8. Major Strasser was bellowing his hatred of France in "Die Wacht am Rhein" (answer d). Of course, "Gvtterddmmerung" (a) would have triumphed over the singing of "La Marseillaise" because nothing is louder than Wagner. Since "Deutschland Uber Alles" (b) -- also known as "Das Lied der Deutschen" or "Einheit und Rechtheit und Freiheit" -- was and is the German national anthem, etiquette would require it to be sung against the French anthem. "Lili Marlene" (c) is the best song for 1940s karaoke; if you were a homesick Nazi, wouldn't you want to sing about a German prostitute?

But remember, everyone, no matter how you answered, you will receive the glamour of being a winner. After all, on "It's All Right!" you are always right!