The writer-and-artist team's new bout of cultural nausea is like a tabloid that might be sold at the Whitney Museum. 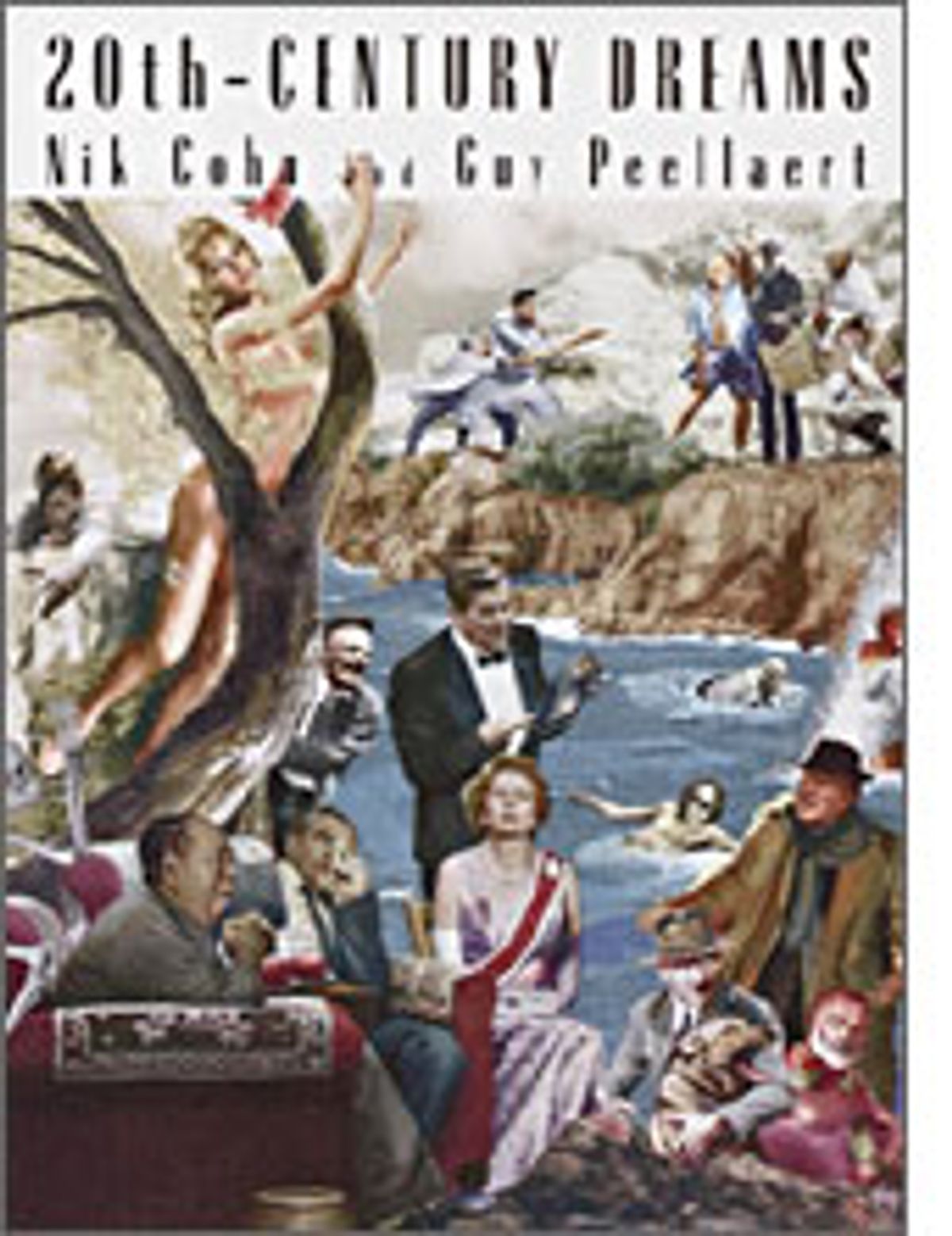 "Rock Dreams" was already a walk on the arousing/morbid side. Peellaert's paintings tapped right into our subconscious fantasies of rock stars' secret (and thus true) selves. Some of the paintings were so shocking they immediately felt right, like the one of the Rolling Stones dressed as Gestapo officers and attended by naked prepubescent girls; or so natural that the shock caught you on the rebound, like the one of Ray Charles with his arm around a woman as he cruises in a convertible.

Visually, "20th-Century Dreams" pushes the technique of "Rock Dreams" -- in which photos of the famous are merged into (what seems to be) an amalgam of collage and painting -- further. It's not just that the frames are even more crowded with incident and information (and, it must be said, very badly served by the crease down the middle of each double-page spread, in which sometimes whole figures are lost), but that Peellaert has made the waxy voluptuousness of his images even more extreme. The famous and infamous here seem to have emerged from some kind of smutty Madame Tussaud's. Their flesh has a death-in-life look -- prurient, slightly sickening, like the come-ons of photos calling to us from magazines moldering in the back of a junk shop.

The book poses as the illustrated memoirs of one Max Vail, born in St. Petersburg with the new century and dead in Manhattan just before the century's demise. Cohn has composed fragments of Vail's memoirs to accompany Peellaert's images; as the writer explains in his introduction, Vail is a conceit who represents the century's extremes (and conjunction) of tragedy and triviality. Befriended at 14 by Rasputin, then escaping Russia during the revolution, Vail journeys to the Zurich of the Dadaists, the Paris of Proust, the Venice of Diaghilev and the New York of John Barrymore and, later, of Warhol, Lennon and Madonna.

Alternately (and sometimes simultaneously) scurrilous and inspired, the pictures spring from a combination of fantasy, anecdote and vicious gossip. Some rehash old tidbits (the Duke and Duchess of Windsor picnicking with Hitler and Eva Braun). Some bring the divisions of the culture into the open (John Wayne and Marlon Brando squaring off for a fistfight). Poetic accuracy (Jean-Luc Godard and Frangois Truffaut, two solitary figures in a movie-theater balcony, watching Jean-Paul Belmondo make out with a young lovely) vies for space with poetic justice (a gowned Margaret Thatcher posing for Francis Bacon as he captures her twisted soul on canvas). Moments of malicious wit (Mao and Nixon weeping over a Lassie movie) alternate with moments of malicious weirdness (a haggard Howard Hughes preparing to do God knows what with the immaculately embalmed corpse of Eva Persn).

The decades collapse together as figures meet their funhouse doppelgdngers (a bloated Elvis Presley in sheriff's uniform busting through the dormitory door of a pot-smoking Bill Clinton). The book encompasses both strange alliances that existed (the unlikely mutual admiration society of Groucho Marx and T.S. Eliot) and ones too good to be true (a champagne-bearing Prince entering a seedy passion-pit room where a naked Princess Diana awaits him; a worn-out Jean Seberg making up beauty-contest winner Sharon Stone).

As the image of Albert Schweitzer on a Hollywood sound stage suggests, no one in "20th-Century Dreams" exists on a higher plane than anyone else does, and no one is immune from show-business fantasy. Lee Harvey Oswald and James Earl Ray plot to switch murders ` la Robert Walker and Farley Granger in "Strangers on a Train"; Salman Rushdie, caught in a storm, takes refuge in the old dark house of the Ayatollah Khomeini. You could see this movie mania as a conscious comment on the voraciously reductive nature of celebrity, the pervasiveness of Hollywood in this century, and you wouldn't be wrong -- but that explanation doesn't account for the images' kick, the deliberate provocation at their root. Someone once said that the best rock criticism was designed to pick a fight, and that's true of "20th-Century Dreams." The book has been put together with the conviction that essences can be reached via scandalous fantasy.

At times that impulse is too easy, as in the panels, derived from the necrophiliac delusions of Albert Goldman, of Vernon and Gladys Presley as hick bootleggers and of a supine John Lennon as a wasted pill-head Christ. But most of the time the provocations are genuine -- squirrelly and satisfying. "20th-Century Dreams" is the ultimate gossip rag, the roman ` clef that Jacqueline Susann and Truman Capote could only dream of. It's a disreputable version of the moment of twilight that follows dreams, when you have yet to realize that what you've just seen isn't real. In "20th-Century Dreams" those visions are more real than history. The book is a sordid thing sprung from our collective unconscious, a secret history in which corpses give off the heat of gossip.