In praise of the football movie masterpiece "North Dallas Forty" (so honest it's almost French!), and looking at Liverpool's shiny animals in the days before they were demigods. 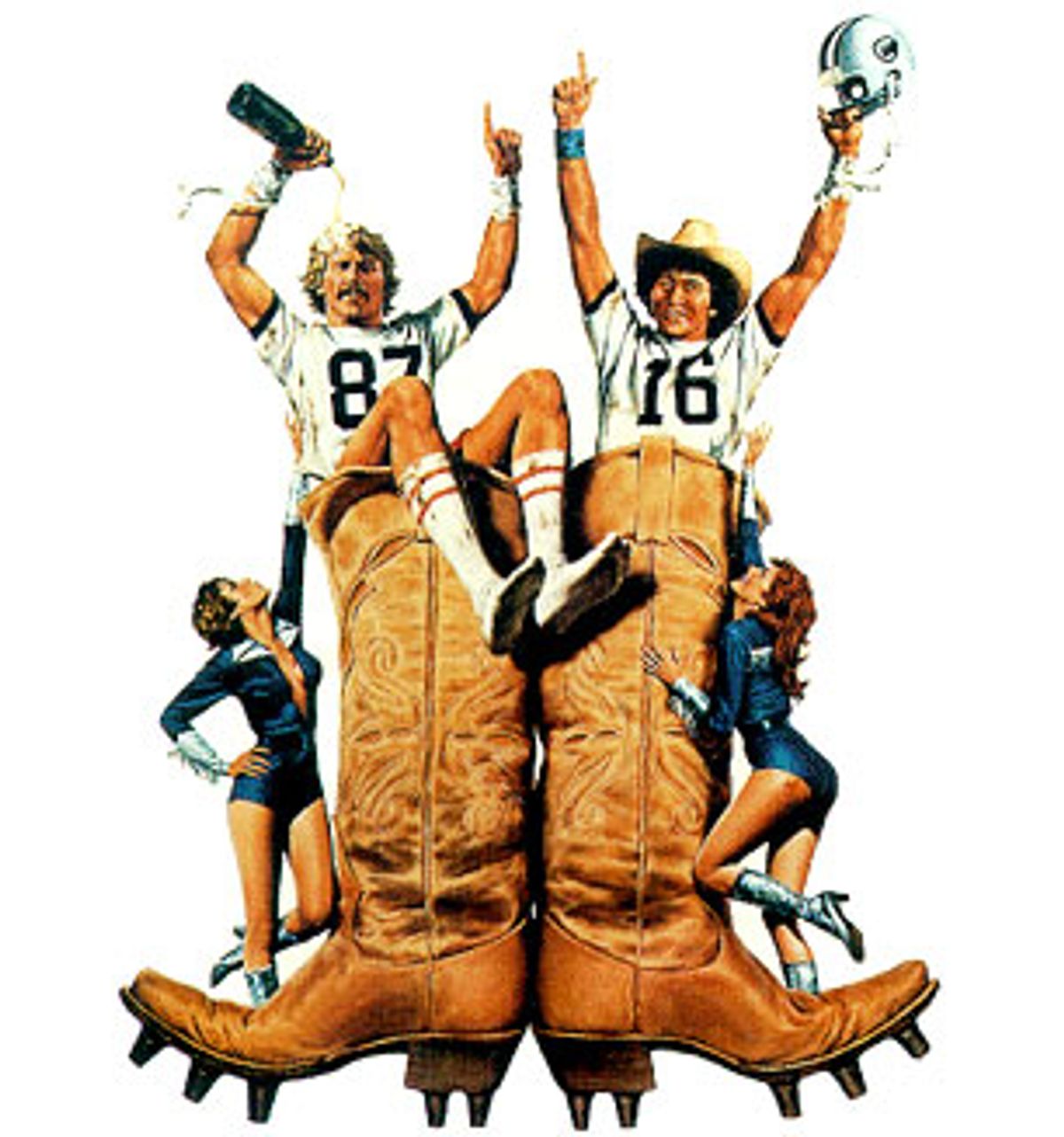 I have been asked in an elliptical kind of Hollywood fantasy-world way to think about writing a sports film. At the meeting, the film that blurted out of my mouth as a pitch template (you know the routine: It's "Caligula" meets "Little Mermaid") was "North Dallas Forty," never having seen it. So, I figured if I was bandying it around like my personal idea handbag I probably ought to rent it.

"North Dallas Forty" is a fucking great movie, electrifying in a way that makes you sick and happy and sick and happy all over again. Apart from the usual required, idiotic romance subplot with thoroughly unbeguiling, scrawny, cowl-necked and whining '70s proto-bint, this movie is so gritty and scathingly honest and real about the world it portrays it is practically French. It is perhaps Nick Nolte's finest hour. I can't think of a film in which that granite-and-whiskey-faced bastard was put to finer use.

As aging, tackle-weary wide receiver Phil Eliot in "North Dallas Forty," Nick Nolte is salt-of-the-earthy, a veteran of the NFL, and is continually required to buckle down and kiss ass and bite his tongue and kowtow to corrupt corporate authorities (the team owner, manager, etc.) in a way antithetical to his nature and heartbreaking -- he's the dancing bear with a ring in its nose, pirouetting miserably under the whip and stun gun. Nolte does a wonderfully scruffy job of showing us the demoralizing personal sellout that is required of players at all top levels of fame -- athletics, film stardom, what have you -- and the resulting cynicism that makes people turn bitter and morally ambivalent and wade without self-preservation into the Valley of the Dolls and other lows of human and career lifestyle destruction.

Mac Davis, sausage-pants'd and sport-perm'd ersatz Tom Jones for '70s TV, also turns in a very respectable performance as a macho, self-effacing pussy hound that would make any '90s feminist college girl tear fistfuls of hair out of her legs in exasperation.

The film, ostensibly a roman ` clef about the Dallas Cowboys, apparently had to leap through many flaming hoops when it came out in order to avoid libel; nowadays, you'd never, ever, ever be able to be that honest about the NFL: The drugs, the lies, the abuse, the insulting corporate mayhem -- the sky would fall, you'd be assassinated by the dark powers of Bud Light, you'd be chased screaming, naked, bald and on fire down Rodeo Drive by trained baboons and black Mercedes station wagons, subdued with blowguns and buried alive out at Twentynine Palms. Film really was enjoying a terrific creative cinima viriti heyday in the 1970s, and movies like "North Dallas Forty" prove that, creatively, most films today have done nothing so much as roll back to the '50s in terms of sheer dumbness and zombie-eyed, psycho-sexual-socio-economic human propaganda.

Speaking of dumbness and zombie-eyed, psycho-sexual-socio-economic human propaganda, I went back to Maggots & Fine Art the other night (and discovered, much to my embarrassment and dismay, that that isn't even the gallery's name. I had merely misheard the name of the gallery owner -- Magidson) and saw the show "Hamburg Days," an exhibition of photographs by Astrid Kirchherr, lithographs by Klaus Voorman and original drawings by Stuart Sutcliffe. Oh, those young Beatles were cute. They really were the original pattern of natural impulse from whence all future manifestations of the Jungian Archetypal Boy Band sprang (sprung? Whatever).

Greasy little greaser boys they were, fresh and thin-faced and leather-jacketed and full of naked teen hunger and saucy ambition. Oh so darlingly fuckable, so yummy. Lennon, particularly, in these shots, is using come-hither camera eye contact and self-conscious prettiness to get over commercially in a way we never really see him do again. It's a moving bunch of girly centerfolds; a slightly more arty version of a Teen Beat layout, but there is something truly wrenching about seeing these fellas -- who later became such an immutable element of the world's musical consciousness -- before they were card-carrying demigods, when they just craved a big future but had no idea how big it was going to be.

You realize what is missing from all the better-known photos of the Fab Four -- after they'd slain America, they looked like they had nothing to prove anymore. In the Kirchherr shots they have yet to arrive; they look half-starved, carnally feverish and innocently frenzied; shiny animals hurtling toward an outlandish, unseen destiny. You want to yell at them and break the news, "Oh yes, pouty little Paul, you are going to get everything on your little wish list and so much more. Stop looking so worried."

Sutcliffe, the boyfriend of Astrid, was perhaps the most dangerously cute Beatle of all, the one with the most restless, radioactive look in his eye, the one who really would have become the poster Face. He chucked it all for love of the young photographer and then died of a brain hemorrhage. His death came mere months after leaving the band and he left nothing behind him but a devastated Astrid (who, according to some guy with John Davidson hair at the party, abandoned photography for a life of wound-licking) and a few very silly doodles on paper, which Maggots is now selling for upward of 4 grand.

It prompts the question: Why are some people Sir Paul-never-an-unglamorous-day-McCartney and some people unlucky, unknown dead boys like Sutcliffe? It brings up that unsettling unfairness in the human psyche, wherein we all really wish all men were created equal and with equal privilege and luck for all, and God says no every time.

I don't know what to tell you about the shameless Voormans. Some people, I suppose, never get over the fact that they were in some kind of proximity to something so much more brilliant and fabulous than themselves, and it disables them from ever having any kind of organic, personal artistic direction of their own. OK, Klaus Voorman did the "Revolver" cover and played in the Plastic Ono Band, which was nice at the time, but this new stuff is weak, weak, runny and flavorless sauce; inspiration dog-eared, wallet-worn and Xeroxed over so many times you can't even tell what the shape of the original was anymore.

Maybe "Hamburg Days" is just a cash cow for old Klaus, but it is sad to see somebody doing sketches of people and places that happened so long ago, from the archives of a rotting old memory. Some people love Voorman, but it seems to me that it would be very inorganic to anyone with an actual artistic agenda of their own to dredge up sketches from stuff that happened almost 40 years ago, just because of the fame (read: $$$) content. Maybe he's broke.

Maybe Klaus Voorman is living in some terrible yert in a remote wooded area and using wet leaves as toilet paper -- maybe that would justify these drawings. Maybe one of the Beatlemaniac women who showed up at the gallery with ice-green eyeshadow and hairstyles that petrified in 1965 could weepily pray to one of the sketches like some Shriveled Finger of St. Stuart. Maybe they're better off stuffed into a Spam can, providing a tiny fire for the homeless guy down the street. Maybe someone could use them in lieu of the wet leaves -- I'd just rather forget them altogether.

Every man has got to make a buck, I realize. But I don't think they have to make Uncle Toms out of their souls to do it; that's just fearful laziness of the lowest water. There are ways -- there have to be ways -- to have your proper glory and preserve your person too.

Welding. They all should take up welding.