New kids in the balcony

A veteran and a novice are the new movie critics at the New York Times. 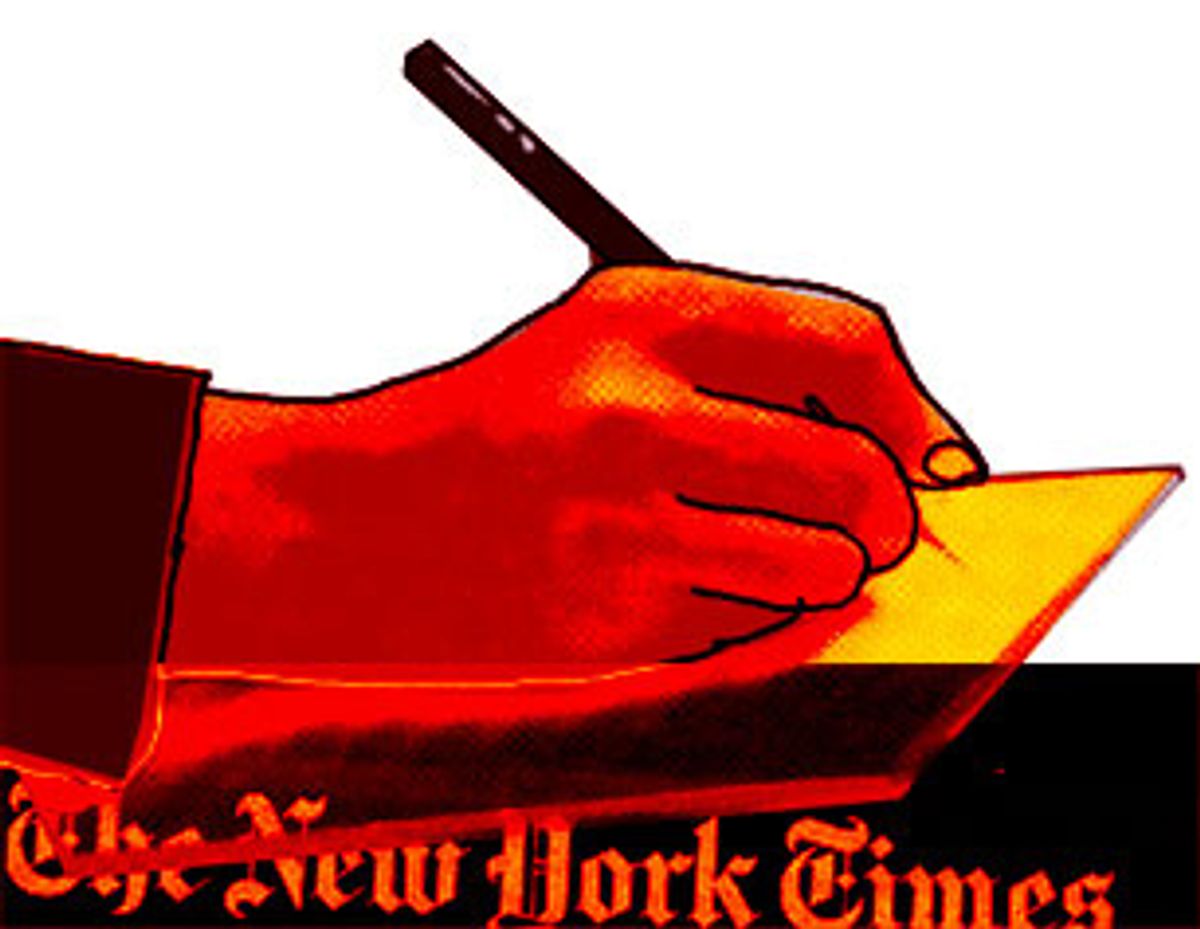 Apparently, Janet Maslin, the departing New York Times film critic, was doing the job of two people -- because the paper announced Wednesday that it had hired both Elvis Mitchell and Newsday book critic A.O. Scott and that they would be sharing primary reviewing responsibilities with longtime second stringer Stephen Holden. While Mitchell had been on the short list since Maslin announced her intention to leave in September, the mystery guest was Scott, one of the most respected book critics in the business. The general feeling was that it was a sad day for book criticism.

"I have to say that I deplore the fact that he's leaving books for movies," said New York magazine television critic John Leonard. "I'm just sorry to see someone that talented waste his time as I do." Leonard, who gave Scott his start writing book reviews for the Nation, is being facetious (I hope). A leading literary critic himself (and former editor of the New York Times Book Review), Leonard understands the joys -- and pitfalls -- of covering different media and has tried in his own criticism to make the culture clash cohere.

But Scott, whose savvy criticism for Newsday and such publications as the New York Review of Books bristles with references from all kinds of culture, doesn't see a discrepancy. "I never had much interest in the hierarchy of high and low culture," said the Brooklyn resident. "There's just good stuff and bad stuff." And though a piece he did on Martin Scorsese for Slate influenced Times cultural editor John Darnton to call him, it's his book reviews that he is known for.

"The minute he told me it was, 'Of course! How obvious! What a smart idea!'" said Laurie Muchnick, Scott's editor at Newsday. Though she sounded grief-stricken by her loss, she was one of several people I spoke to who said the appointment would be a gain for moviegoers (despite that little matter of him never having reviewed a movie before).

Darnton asked Scott to audition by reviewing a few films for him, and Scott chose "Flawless" and "The Limey" -- "more or less movies I hadn't read much about but seemed different enough that I could show some range," he said. ("I think I said it would have been better if Robert De Niro had been wearing the dress," he recalled of "Flawless." "That was the one to get a lot of mean lines in.") Whatever he said must have struck a chord, since national name-brand critics as diverse as Joe Morgenstern and David Denby had been short-listed for the job.

Not everyone agrees that the book critic was an obvious hire. "Scott doesn't at this point have the qualifications of a Dave Kehr [the former film reviewer of the New York Daily News, considered by many to be a likely pick for the job], but the Times editors apparently didn't want someone like that," Roger Ebert said. "Has he seen six films by Bresson? Ozu? That's not the sort of question they would think to ask. Would they hire a book critic to be their music critic? Architecture critic? No, but that goes without saying. They probably believe, like many other editors, that anyone can be the film critic. It is the only job on the newspaper that everyone, including the editors, believe they can do better than the person on the beat."

My own speculation (that the Times would hire internally, shifting a cultural critic from another beat) was way off the mark -- though executive editor Joseph Lelyveld, who reportedly took a keen interest in this hire, had entertained my theories with a straight face. "They put up a pretty good smoke screen," says Scott. "I didn't see my name mentioned anywhere." And the Times' propensity to shift writers to different beats was certainly one of the job's attractions. "I think it will take a while to get my bearings as a movie reviewer, but I do look forward to writing other things for them," Scott adds. That should make John Leonard happy, too.

Elvis Mitchell, on the other hand, is much more of a known quantity for followers of film criticism. Since 1997 he has reviewed films for the Fort Worth Star-Telegram, as well as National Public Radio and CNN. (Mitchell will continue to do some reviewing for NPR but must lose his other commitments as a Times employee.)

Eric Celeste, features editor at the Star-Telegraph, thinks Mitchell gets a bad rap. "Being from Dallas, I subscribe to the Jimmy Johnson theory," he said, invoking the former Cowboys coach. "You treat your superstars different than you do everybody else. And Elvis is a superstar." It's not a question of ego, Celeste is quick to add: He thinks that in doing at least three jobs at once, Mitchell was spread thin. He also makes a point of saying that the writer always paid his own way when he came to Texas from Los Angeles. And the quality of Mitchell's reviews -- trenchant and up-to-the-moment -- were worth the wait.

"His raw copy is like getting a meal that's too much to eat at one sitting," said Celeste. "He does know an incredible amount about movies. He's a person who has so many good insightful reactions to a movie that, unfortunately, in a tight news hole sometimes you go, 'We've got to lose some of this good stuff.'"

The Times may be disinclined to lose some of that good stuff -- which is why, Mitchell says, he wanted the job. "I think the biggest influence on movies this year may be Jean-Luc Godard, whose influence you can see on 'Three Kings' and 'Run Lola Run' and 'Being John Malkovich,'" he said, calling from L.A. "To play with a traditional narrative structure and fracture and splinter it -- that's a piece I would love to try to write at some point."

Not exactly stars and thumbs. What is consistent in the Times' hiring of Mitchell and Scott is the level of intelligence both bring to their criticism. For himself, Mitchell savors the idea of playing sensei to Scott's novice. (Mitchell just turned 41, Scott is 33.) "I think the idea of enlightened amateur and talent is a wonderful thing," he says. "We'll be like the Bill Cosby and Robert Culp of film criticism."

But on "I Spy," the white guy was the old hand. Mitchell scoffs at the suggestion that being black was a factor in the Times hire ("as if they had some quota to fill") and cringes at the mention of the more-Mumia-than-thou dreadlocked photo of him on the Star-Telegram's site. "That's one part of my life that will happily be over," he said. "That's coming down."

Mitchell feels that he and Scott share an irrepressibility and ambition that mark a departure for the Times' film criticism. "It makes sense if you're going to replace Maslin you replace her with people who think differently and view movies differently," he says, while offering no criticism of the paper's 22-year veteran. Mitchell has been branded a "Paulette" (a disciple of Pauline Kael's), and indeed defends the great New Yorker critic's legacy. "One of the things people seem to miss is that when she was writing she was really in touch with popular culture," he said. He pointed to his own review of "Three Kings" as benefiting from that kind of awareness: "It was pretty fun to mention that both Ice Cube and Marky Mark were huge popular stars in 1990, when the movie was set," he said. "That's all stuff to be noted and I think a lot of critics are out of touch with that."

How the labor will be divided between the three is still to be determined, and Ebert is one of several people I spoke to who was skeptical about
the arrangement. "I want to be the fly on the wall when they decide who gets to review the next Tarantino film," he said. "I may be wrong, but I think you have to have a principal critic and assistants. The troika sounds about as workable as the Chicago Cubs' experiment with a college of coaches."

For now, Mitchell's most pressing concern is finding a place to live in New York City. But as a writer who can spit out barbs like his description of "American Beauty" -- "That was like a Todd Solondz movie starring Jack Lemmon" -- he stands to lively up the place, dreadlocks or no.