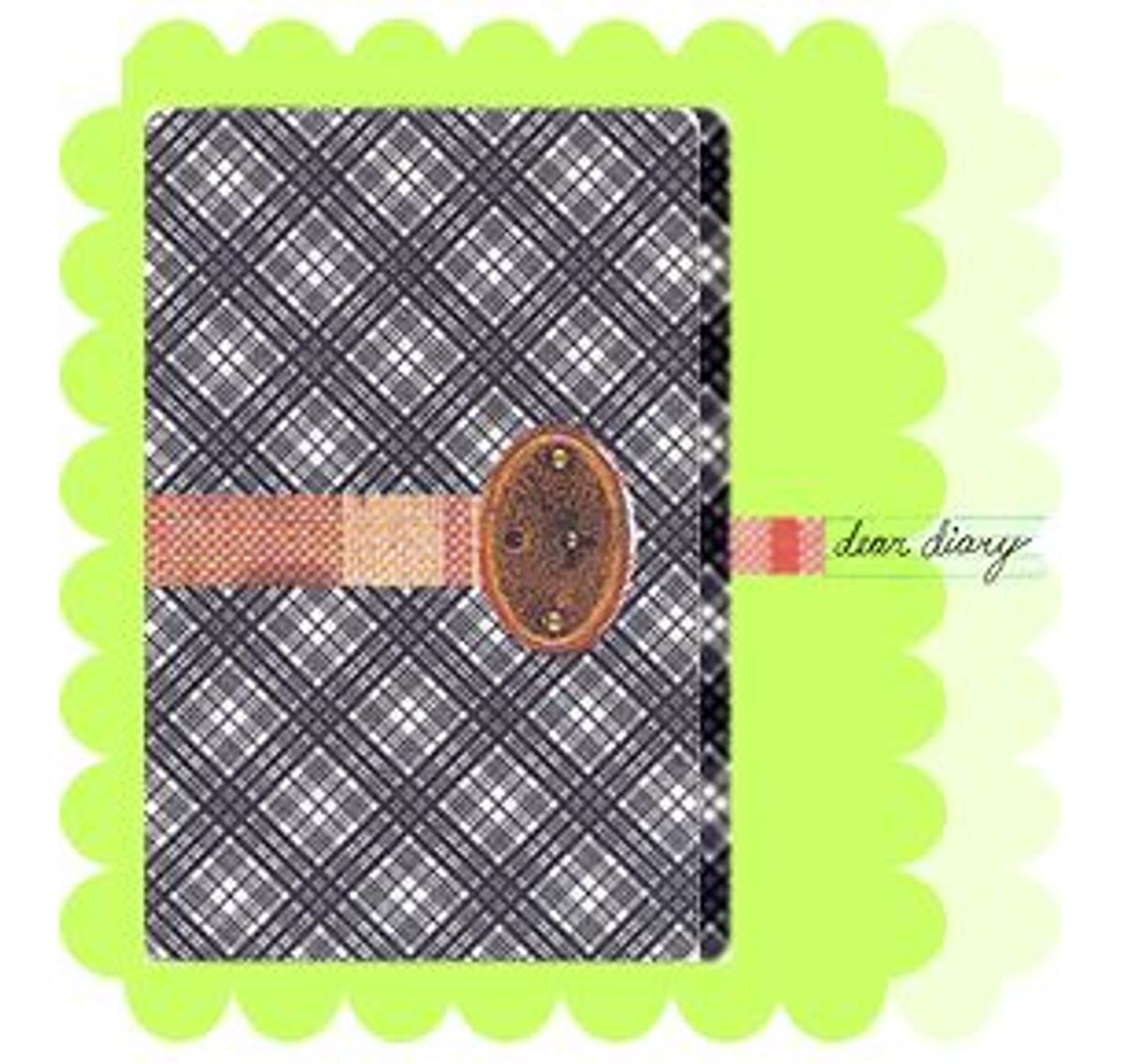 While the Web seems to be slowly collapsing into a small, well-publicized group of uniform, corporate-sponsored networks (Snap, Go Networks, Lycos), online diaries have survived on the outside, occupying that Internet space where a level ground for publishing still exists. Minimal design skills are required; all you need is a healthy obsession and a modest amount of disk space on someone's Internet server. Online diaries are of course inconsistent in their quality, but they're also unrelenting in their honesty. If the bigger sites are starting to resemble major television networks, complete with the accompanying "same crap, different channel" feeling, online diaries are holding their position as the public-access programming of the Web.

When human nature meets easy entry, confessionalism results. Services like Geocities and Xoom, which offer free Web sites to anyone (no matter how great their personal problems), have been responsible for thousands of individuals creating and maintaining diaries for everyone (or no one) to view. The subjects range from the outrageous to the everyday, but the structure is fairly consistent: today's date and entry, links to previous dates and entries, a guestbook, an e-mail link. But even with free server space and online connectivity at work and school, it has been the responsibility of the individual to plan the structure and design the diary.

But Andrew Smales and an ingenious site called Diaryland might change all of that. Smales is a longtime Web diarist and Internet absurdist. His personal domain, Be Nice to Bears, boasts the slogan, "No Content Ever. It's a Promise." (In fact, it has a personal diary, some links and a selection of animal pictures against weird backgrounds.) He launched Diaryland in September, marrying his experience as an online diarist with his programming skills.

Diaryland is an online community-cum-free Web service for other diarists. Users sign up, receive a Diaryland subdomain with unlimited e-mail aliases, and gain access to a variety of diary templates.

Yes, templates. What distinguishes Diaryland from most other free home-page services is the way it is custom-built for handling journal entries. The templates are many and dizzyingly varied -- a riot of colors and formats and background designs. Each template offers the same navigation: "latest entry," "older entries," "contact me" (with the e-mail link of your choice) and a link back to the Diaryland home page. No HTML required, and the site automatically archives your older entries for you. Diary-in-a-box.

"A conversation in my religion class reminded me of how i used to try and send chad a thought. I'd trace the thought's path from me in my bed, down the street, through my neighborhood, across the highway, through chad's neighborhood, through the door, past the kitchen and the living room, into his bedroom and into his sleeping brain. Once the thought was there, i would concentrate on deeply nesting it there ... rooting it. I just wanted him to keep me in his thoughts. I wanted him to call me the next day."

On any given day, one can browse the members directory and read entries that range from the exhaustingly banal ("A new mall just opened up a couple of miles from my apartment, and a new Wal-Mart supercenter and Sam's Club just opened up here, too" -- Steeve) to the revelatory (from Serenity: "I mean I can actually look in the mirror and NOW finally say 'Alyssa Blythe Megan, you are beautiful' ... and actually be able to believe it") to the unabashedly ugly ("I was just summoned into the other room so that my father and his shithead girlfriend could make fun of me. I hope she dies slowly"). Cliques have even formed, producing the occasional meta-narrative in which diarists reference other diarists (sometimes describing the same event in two different voices).

The collective Diaryland population certainly boasts some variety in personal experience and eloquence -- after all, the diarists' ages range from 10 years old to a few members of the punchcard-computer generation -- but most of the entries share a common fabric from which most expositional writing is woven. Angst, ennui, self-doubt and the pendulums of interpersonal relationships largely characterize the postings, even if the target of these emotions changes radically. (Insert boyfriend/girlfriend/stepmother/sociology professor/best friend/other Diaryland member here.) Different people, familiar feelings, communal templates. Plunging into Diaryland can be a lot like reaching into your closet in the dark: You might not get exactly what you want, but it's probably close enough.

The ironies of Diaryland are many. It's the most personal of writing in the most public of mediums, and its substantial aggregate of voices makes this particular irony even more patent. It seems weird to be creating a deceivingly diverse array of templates for the most individualistic of expression. And in the end, aren't people just assembling themselves together into just another mass-market auction house or search engine, saying, "Find me! Find me!"?

Smales apparently has chosen to let these overtones this escape him: "I just like making things, little self-contained projects."

For all the seeming naiveti of Diaryland, it's a bit difficult to believe that it was built on such a simple premise, without any ironic intentions at all. Especially considering some of Smales' previous pet projects. After all, he was responsible for a rather notorious Web page entitled, "People I Would or Wouldn't Fuck on the Internet." The page, created by the fictional "Matty Lewis" and complete with highly calculated misspellings and malapropisms, took pokes at several prominent online diarists and caused a bit of speculation about the true identity of its author. While some tried to track down the real Matty Lewis, Smales actually received several solicitations from diarists campaigning to be added to the list or (more often, and more ludicrously) moved from the sexually stigmatizing column B to column A.

But bring his previous offenses into question, and Smales actually seems a bit surprised: "A few people think I made Diaryland as a bit of a joke, but I swear I'm too lazy to build all of this as a joke. I basically wanted to make a system that was easy to use for people who didn't know anything about HTML and this seemed like the best way to do it." Indeed, his decision to create Diaryland was a product of his online interaction with smart people who didn't have the time or energy to create their own home page. Smales wanted to read their words online, so he built them a tool.

Smales claims no less than 4,600 active Diaryland members, garnered almost completely through word of mouth. (He estimates approximately 100 new members are signing up each day.) Diaryland does offer some attractive templates, after all. It also gives HTML-savvy members the ability to alter their templates.

Finally, unlike the crop of free home-page tools from sites like Tripod and Open Diary (another diary community with slightly more ascetic template designs and tools), Diaryland does not display ads on members' pages. (The site does, however, collect demographic information from users during registration; Smales has entertained the idea of hosting banners but, he insists, ads will never appear on users' individual diary pages.) Combine these features with the appealing handmade quality of the site -- browse Diaryland and you readily see that it was the endeavor of a single online enthusiast -- and it's no wonder Smales is playing landlord to a swelling legion of Web Confessors.

"Do not bring a boyfriend [to college] -- it is like bringing sand to the beach."

The natural honesty running through Diaryland serves as the best indication that the site has comfortably transcended any initial dubious regard or ironic undercurrents. But what is the secret of its success? Is it an allegiance to the Cult of Andrew? (The only publicity Smales provided for this project was an announcement on Eggpost, his personal e-mail newsletter.) Is it the site's alarmingly cute template designs?

Smales has other ideas about the site's appeal: "I'm biased because I would rather people use Diaryland because it's fun -- but I think people use it because it's easy and because it's free." So, perhaps Diaryland's tools for community necessarily compromise the individuality of the personal narrative, but the importance of its existence to its members seems to supersede its ironic overtones. It remains an accessible conduit for personal expression, a concept that tends to make any self-conscious trappings melt away.

And if Diaryland's free service and ease of use really catch on and it matures into the "most ridiculously over-featured Web service" Smales originally intended, Diaryland will hopefully avoid becoming another bland network of cookie-cutter content, like Yahoo and its brethren. In a perfect world, its constituency of heart-on-their-sleeves members will continue to thrive off their thoughtfully designed diary templates, and the individual will persist in the text, even if he gets a little lost on the surface.

Todd Levin is yet another freelance writer living in Brooklyn, and now an online diarist.