The spirit and the flesh 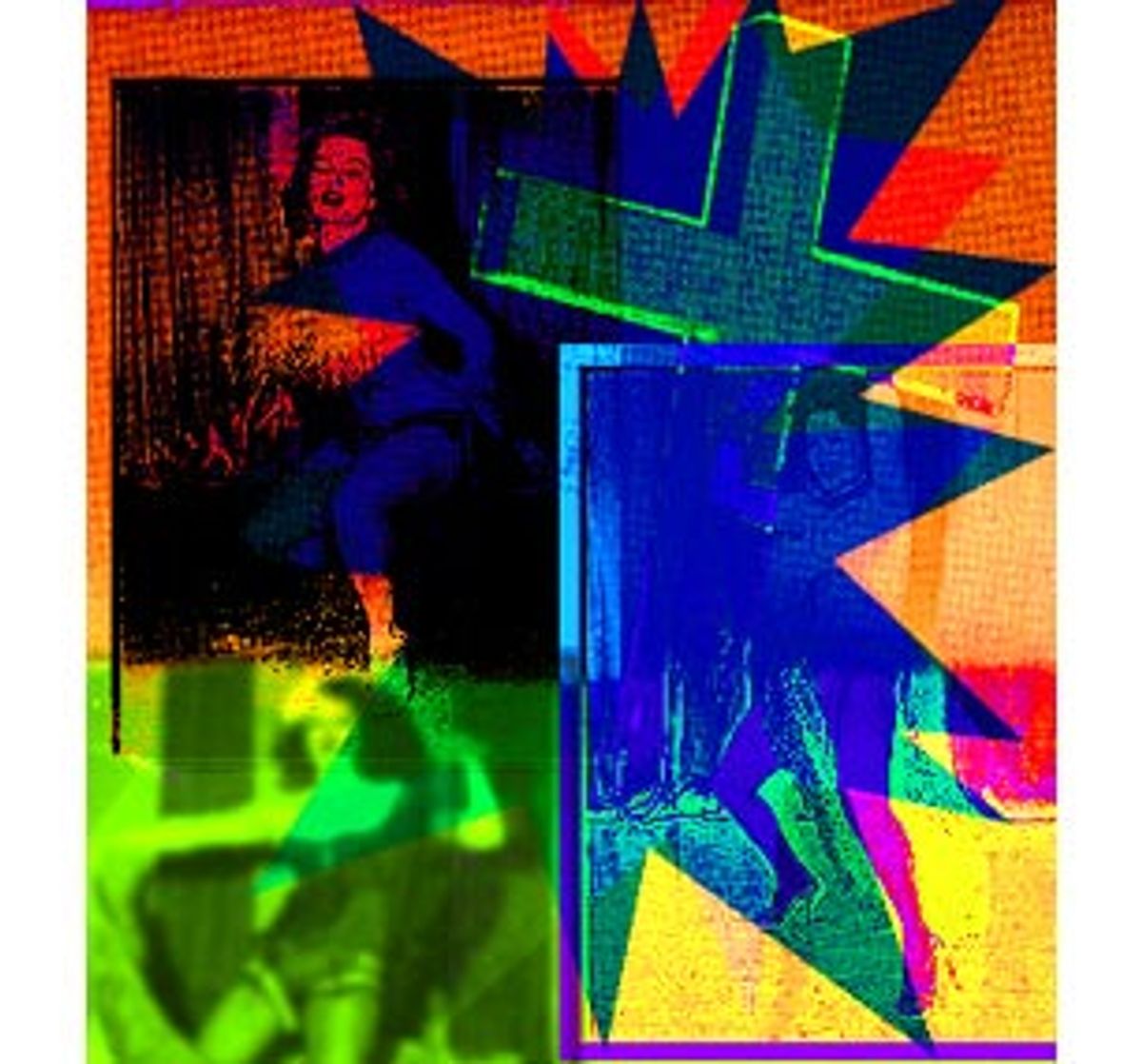 Kellie Everts' obsession with sex was coming between her and God. Raised a strict Catholic, she considered herself a spiritual person. She'd tried celibacy several times, but her libido was too strong and she'd broken down, usually at midnight on New Year's Eve, when she'd have a man waiting in bed. By her own account, she'd slept with more than 1,000 guys by 1978. A stripper and exhibitionist, she'd never had a problem finding partners.

In May of that year, she had a vision in her Brooklyn apartment. Kneeling at her altar to the Virgin Mary, the 33-year-old prayed for guidance in her dealings with men. Everts asked the Virgin to be mother not only of her soul, but of her body.

The room, as Everts tells it, filled with a bright, white light and the Virgin appeared. "I want you to stop having sex with men," she commanded. Then she vanished. It was the epiphany Everts had prayed for. For five days she thought about the Virgin's words. "I saw good-looking men everywhere," she says. "But I thought, if I don't do this I'll be a coward." So Everts pledged herself to Mary, promising never to have sexual intercourse again.

More than two decades later, Everts has kept her vow. And though she didn't exactly get herself to a nunnery, she leads a cloistered life. Everts lives alone in her 19th century house on the outskirts of the Catskills in upstate New York. Animals form her only company: Ducks, dogs, cats, possums, chickens and roosters roam her 50-acre spread. Stained-glass windows and paintings of cherubs adorn her home; she keeps a statue of the Virgin in her second-floor window, which she lights up at night for passers-by. According to Everts' business card, which features a cross superimposed over a flower, she is a faith healer, reverend and hypnotherapist. "Your healing is waiting for you," the card says.

The Gospel according to Everts, however, would make most preachers blush -- if not want to banish her straight to hell. Spiritual to the core, she also happens to be a stripper, a Goddess-worshiping feminist, a preacher of sexual liberation and a star and producer of fetish and domination videos.

When Everts isn't preaching her New Age philosophy -- she rails against male-dominated religion, asks men to cast away their guilt over sex and to get closer to God through respectful treatment of women and animals -- she makes some of the nastiest, most bizarre videos in America. Everts will pee for the camera to a soundtrack of classical music; she will squat down in a field, as if defecating, then show a guy licking what looks like chocolate pudding from her ass. She and her girls -- mainly amateurs whom she recruits locally or hires from New York City -- sit on guys' faces; she frolics in pond mud, squats for an extreme close-up, sticks things in various orifices. "We Cover a Multitude of Sins," the tag on her video line says. Hustler magazine recently published an Everts video review headlined "Her Shit Don't Stink."

Not long ago, I visited Everts at her home. We spent an afternoon chatting about God, sex and sin. She'd prepared a stack of clips: spreads in men's magazines, newspaper articles and reviews of her shows. At 54, she didn't look much like the fantasy doll she once was. She was pale and covered in makeup. Her hair was cropped short and bleached platinum blond. Dressed in a conservative, black pleated blouse, she looked more like a prim suburbanite than a sexual deviant.

But she still has her fans: men who appreciate her deep, forceful voice, her 44-inch chest, her ability to humiliate convincingly. Men will drive hours and spend $1,500 for a session of her charms.

She wasn't always so hardcore. "I realized I was an exhibitionist," Everts tells me, "when I started posing topless at age 15." A year later, she ran away from her home in New York and landed in Hollywood with vague dreams of modeling or acting. Neither career panned out, though, and by her early 20s, she was a single mom stripping to make a living.

Back then, she was a free-love activist: A picture at a rally shows her carrying a placard that reads, "Nudity is God's Creation." Crowned Miss Nude Universe in 1967, she spent the next two decades touring honky-tonks in the United States and Canada, taking time off to study yoga and faith healing. Between 1968 and 1979, she appeared in Playboy nine times, and would pose for about 30 other men's magazines. In between, she explored other interests: bodybuilding, writing pro-sex articles and co-authoring a book about women's physical fitness.

Everts' idea to blend stripping and preaching came in 1973. A California faith healer named Verna Talbot told her she had a revelation that Everts should use her body to raise money for Talbot's sect, the Church of the World Light. Everts was, as she put it, "under Verna's spell." Dancing one night at a place called the Follies Theater she decided to give a little sermon before her next number. She told the men that God loved them, that she would pray for their souls and that she felt compassion for their lustful thoughts. The men were stunned but they listened because they wanted to see more of her booty.

Everts proved as comfortable preaching the catechism as shaking her breasts. It was a paradox the press adored, and she played it up, giving interviews wherever she went. "God wants me to use my body to make money for his church," she told a Montreal newspaper in 1977. "I have felt his presence."

She became known as the "stripper for God." It was a bit of a misnomer: Everts wasn't really stripping for God; she was doing it to make a living. But as long as she captivated men's eyes, she thought, why not try to save their souls. One night, before a show at the Playboy Club in Chicago, Everts was in her hotel room when she says she saw Jesus. He gave her three rings, signifying her betrothal to him, and he told her she was on the right path.

Her career peaked in 1987, the year she was offered $5,000 a week to dance at the Millionaire's Club in Canada. But she was burning out. "I told my agent I was through," she says. At 42, she felt she was getting too old for the road. The job seemed taxing and the fame was more work than it was worth. She'd also stopped preaching as part of her act. "I got tired of being attacked and getting death threats," she says. Figuring she'd earn enough making videos, Everts retired from the stage, bought a house upstate and holed up as a living-room pornographer.

At first, she balked at her clients' demands -- especially the scatological stuff -- but she quickly discovered that raunch sells. Her videos got more explicit; it'd be better to feed their fantasies, she thought, than have them sublimate their sexuality. Twelve years later, Everts is an underground success, marketing about 450 tapes through her catalog and Web site and selling about 100 each month.

A refining of her religious philosophy has come over time. She's canned the parts of Christianity she finds offensive and replaced them with elements of Hinduism, Buddhism and her own ideas of feminine worship. Her commercial Web site links to her Church of the God Within, where, with drawings of a topless Goddess and a woman in thigh-high boots and bathing suit, she explains her ideas.

"All creation," Everts says, "comes from one source: God the Mother; all life is spiritual and animals can ascend into heaven."

"The Christian religion has some excellent doctrines," says Everts, "but also contains the poisons of male domination -- most notably the denigration, enslavement and exploitation of women. Women are punished for charging money for sex -- because in doing so, they claim their own bodies as a resource to exploit for their own benefit. If fornication and adultery are sins, then punishment should be applied to both sexes."

Such concepts haven't made Everts popular in her community.

For now, Everts is trying to find followers for the storefront church she opened in Binghamton, N.Y. Living in such an isolated place makes her lonely, she admits, and she'd like to meet some spiritually minded companions. But it's hard to find disciples.

Indeed, this has always been Everts' curse: Her body and striptease act got people to notice, but then they wouldn't take her seriously. Yet she perseveres because she feels she's been chosen -- and she doesn't know what else to do. She likes her land and she loves her animals. It's a little patch of her own, a place to continue her crusade: preaching redemption through sexual openness, hoping for a society that condemns neither the sinner nor the sin, working, as she puts it, for "global salvation."

Whatever the case, I admire her strength of character. It occurs to me that there's something sad about her isolation; that she seems hungry for love -- if not physical then spiritual. At home, I watch one of her videos and see her pee in a cup for the camera. I hope the Virgin's touch is enough to sustain her.