Ten titles that kept us up all night in 1999 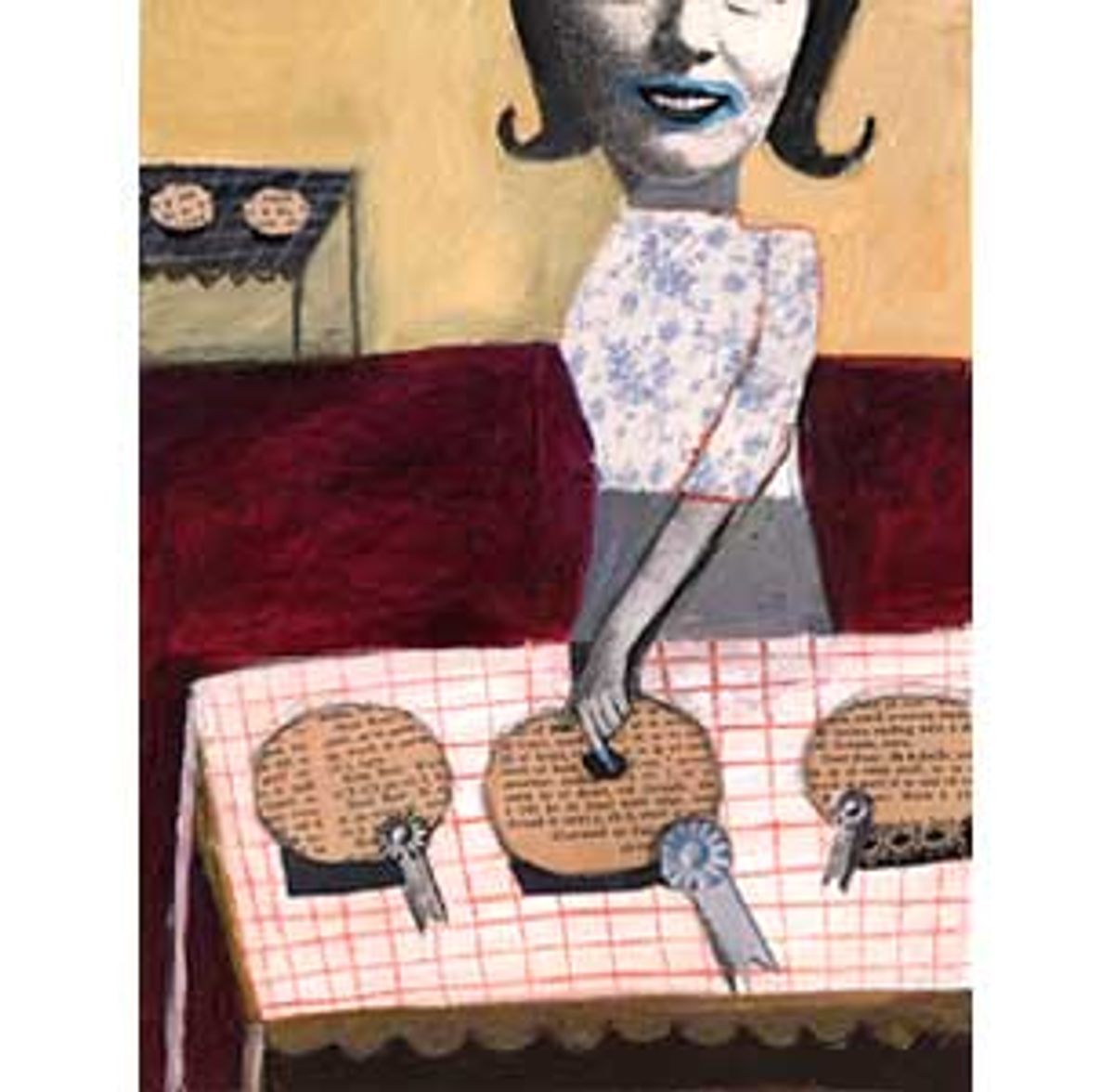 "A Prayer for the Dying" by Stewart O'Nan

"Black Hawk Down: A Story of Modern War" by Mark Bowden

"Careless Love: The Unmaking of Elvis Presley" by Peter Guralnick

"Lost on Earth: Nomads of the New World" by Mark Fritz

"Secrets of the Flesh: A Life of Colette" by Judith Thurman

"Show Me a Hero: A Tale of Murder, Suicide, Race and Redemption" by Lisa Belkin

We confess we didn't begin the process of choosing our 10 favorite books of 1999 with quite the enthusiasm we felt in the past three years of the Salon Book Awards. Is it millennial malaise, we wondered, that caused most of the readers we asked for suggestions to murmur listlessly, "I didn't really read anything that blew me away this year"?

Of course, everyone had at least one exception to that ennui, and many of the books on our final list were the sole bright spot in some readers' otherwise lackluster ventures between the covers. Others we like to consider our own "discoveries," books we picked up with a sense of duty and put down with a sigh of profound satisfaction. Some of them, like Lisa Belkin's "Show Me a Hero" and Mark Fritz's "Lost on Earth," went bafflingly unrecognized (in Belkin's case, even by Salon) when first published. Others, like Stewart O'Nan's "A Prayer for the Dying," weren't greeted with the kind of fanfare we passionately feel they deserve.

This, of course, was the year that J.K. Rowling's "Harry Potter" books took over the bestseller lists with greater tenacity than any student radical occupying a dean's office ever showed. We loved the "Harry Potter" books, too, and heartily recommend them to adults and children alike -- but you didn't really need us to tell you that, did you?

Each title on our 1999 list is one we wouldn't hesitate to press into the hands of skeptical friends and relatives with the fevered recommendation of bibliophiles everywhere: "You've got to read this." Some are chilling, some hilarious, others moving, but all of them had us spellbound, reluctantly looking up from their pages after hours of reading with the conviction that books like these are the reason we got into this daft line of work in the first place.

You don't have to follow every kink in the Byzantine plot of Stephenson's tour de force novel (thank God) to enjoy it thoroughly. "Cryptonomicon" juxtaposes a handful of eccentric mathematical geniuses enlisted as cryptographers in World War II with a band of contemporary high-tech entrepreneurs trying to set up a "data haven" in a remote jungle island near the Philippines. And while the book's primary concern (beyond the allure of secrecy) seems to be the elaborately artful rituals of deceit that both war and business necessitate, Stephenson's novel is also both a the-way-we-live-now portrait of the new information economy and a ripping World War II adventure that includes a grueling trek through the jungle and a riveting expedition to salvage a sinking submarine. It's a hell of a ride that throws in, among other delights, theories of cryptography, mathematical charts of the sexual appetite and various famous figures from the birth of computing for good measure.

It's a mystery with a solution that won't surprise anybody, but months after you've read it what you remember is not the outcome but the endearing central character, Lionel "Freakshow" Essrog, a would-be private eye with Tourette's syndrome. Lionel's feverish brain sends the standard obscenities spewing out of his helpless mouth, but what fascinates Lethem about Tourette's is its obsessive-compulsive mauling and molding of language; he turns pathology into poetry and gives his jittery, galumphing narrator a poet's sensitivity. The story of this lost soul and his hunt for the killer of the penny-ante thug who rescued him from a Brooklyn orphanage is too sad and strange to sit comfortably in the contours of a genre novel, but the originality of Lethem's hero and the sputtering joy of his tic-pocked language take the book to a level that not many novels, genre or otherwise, can match.

An abused wife who's lost her faith; a brilliant self-help guru addicted to violent porn: Although "Original Bliss" is, deep down, a conventional love story, you never get the feeling that you've been there before. In this funny, brutal and wonderfully touching book, Glaswegian novelist A.L. Kennedy doesn't shy away from the big questions, but under her hard intelligence beats a heart of cotton candy. The book is a page-turner that teases you until the very end with the question: Can these two people, so wildly unlike and so clearly made for each other, escape their demons, spiritual and sexual, in each other's damaged arms?

A schoolteacher's wife leaves him, and their sons (9 and 10) have to learn how to get along with her gone. A pregnant teenager, thrown out of her house, takes refuge with two ornery old bachelor ranchers, whose initial distress gives way in time to helpless, comical love. If Kent Haruf's profoundly simple and sentimental novel about a few decent people in an unremarkable High Plains town had hit a single false note, the whole delicate structure would have crumbled. But not the least of the book's miracles is the matter-of-fact lightness with which it sustains its melancholy sweetness; the greatest may be the ease (or seeming ease) with which it reconciles the all but irreconcilable legacies of Ernest Hemingway and William Faulkner.

A Prayer for the Dying

Stewart O'Nan's short novel takes place some years after the Civil War, in the bucolic town of Friendship, Wis., which with little warning finds itself quarantined during a catastrophic diphtheria epidemic and simultaneously threatened by an advancing fire. The narrator and Job-like hero -- Friendship's sheriff, preacher and undertaker all in one -- has to make bitter choices, sealing off the town (and, thus, escape) as he watches his friends and loved ones die. And then he is left to learn that even the hardest choices can still be the wrong ones. The beauty and the horror are inextricably, almost obscenely joined; few novelists have gazed as unblinkingly on that union as O'Nan does in this great and shattering book.

A real nail-biter, Mark Bowden's account of the 1993 raid on Mogadishu that resulted in the deaths of 18 American servicemen and more than 500 Somalis has been called one of the most accurate accounts of combat ever. With no experience in battle and little more with battle scenes, we can only testify that it's a dazzlingly lucid, hair-raising depiction of total chaos. Bowden presents the conflict from dozens of points of view, including those of Somali civilians and of the United States' elite Delta Force operators. If the ice-and-death adventure of Jon Krakauer's "Into Thin Air" struck you as a bit slow, Bowden's equally tragic blood-and-dust reporting masterwork will provide an even more potent shot of adrenaline.

The second and final volume of Guralnick's massive Elvis project doesn't hunt for meanings and it doesn't judge -- or at least, it tries not to. The singer's life from October 1958, when he arrived in Germany to complete his tour of duty with the army, to his ugly and undignified death in the summer of 1977 wasn't all downhill, and his triumphs -- notably his 1968 television special and his first Las Vegas performances the following year -- take his biographer just as high as they took his audiences. But for most of this meticulous chronicle of second-rate movies, second-rate recordings and increasingly erratic (to put it euphemistically) concert performances, Guralnick can barely conceal his exasperation and his sadness. Yet he never loses sight of his subject's talent and generosity, and he answers it with a talent and generosity of his own. Out of his narrowly focused month-by-month record of Elvis Presley's fall arises a terrible and, in its way, magnificent fable of American excess, arrogance, weakness and waste.

Reporter Mark Fritz lays out his tales of refugees and refugee workers with a short-story master's feel for character and plot. He has a real talent for affability: Almost without exception he likes the people whose stories he tells, and while their hardships obviously matter to him, what captures his imagination and his skill is their personalities. His portraits of the uprooted encompass natives of lands as diverse as Germany and Iraq and Togo and Bosnia, but no one he writes about seems foreign; he puts us in his subjects' shoes by showing us how very much like us they are. (And he drives home the point that there is no longer anything anomalous about their experience, reporting that in the mid-1990s, roughly one out of every 100 people on the planet was forcibly uprooted from home.) He also has a gift for making tangled clashes (the Liberian civil war, for instance) easy to follow without talking down in the process. Although Fritz's subject matter is cruel, his book is strangely delightful -- on one level an outcry against acts of inhumanity, but on another a celebration of our common humanity.

Massive, research-packed biographies are often honored more for their comprehensiveness than for their readability; Thurman's life of the sensual French writer is a glorious exception. Lushly textured and psychologically shrewd, it deftly digests the existing record and incorporates new material to provide an engrossing account of a fascinating and maddening woman. It helps that Colette's life teemed with passion, scandal, intrigue (admittedly, some of it rather petty), perversity and celebrities, literary and otherwise. Thurman herself seems alternately dismayed, admiring and philosophical about her subject ("There was not an idea that could carry Colette away, or a sensation that couldn't"), but her complex response only deepens this exemplary attempt to do justice to the mysteries of a woman's life.

Show Me a Hero: A Tale of Murder, Suicide, Race and Redemption

Belkin's generous, intuitive story of the forced integration of Yonkers, N.Y., in the late 1980s and early '90s is the kind of nonfiction book that writers attempting bold social novels (paging Tom Wolfe) might take as a challenge. It's packed with compelling characters: the stern, idealistic judge who orders the city to build public housing in middle-class white neighborhoods (and nearly bankrupts the municipal government with fines when it defies him); the visionary but cold-blooded planner who believes that townhouses rather than high-rises will solve the chronic ills plaguing such developments; the little old lady in tennis shoes who starts out agitating against the housing and winds up advocating for its residents; the poor, struggling mothers for whom it is their last best hope; and the 29-year-old mayor who stands up to the local demagogues (their followers throw Pampers at him) and pays a terrible price.