"My husband was standing there holding a riding crop. 'When did we get a horse?' he asked." 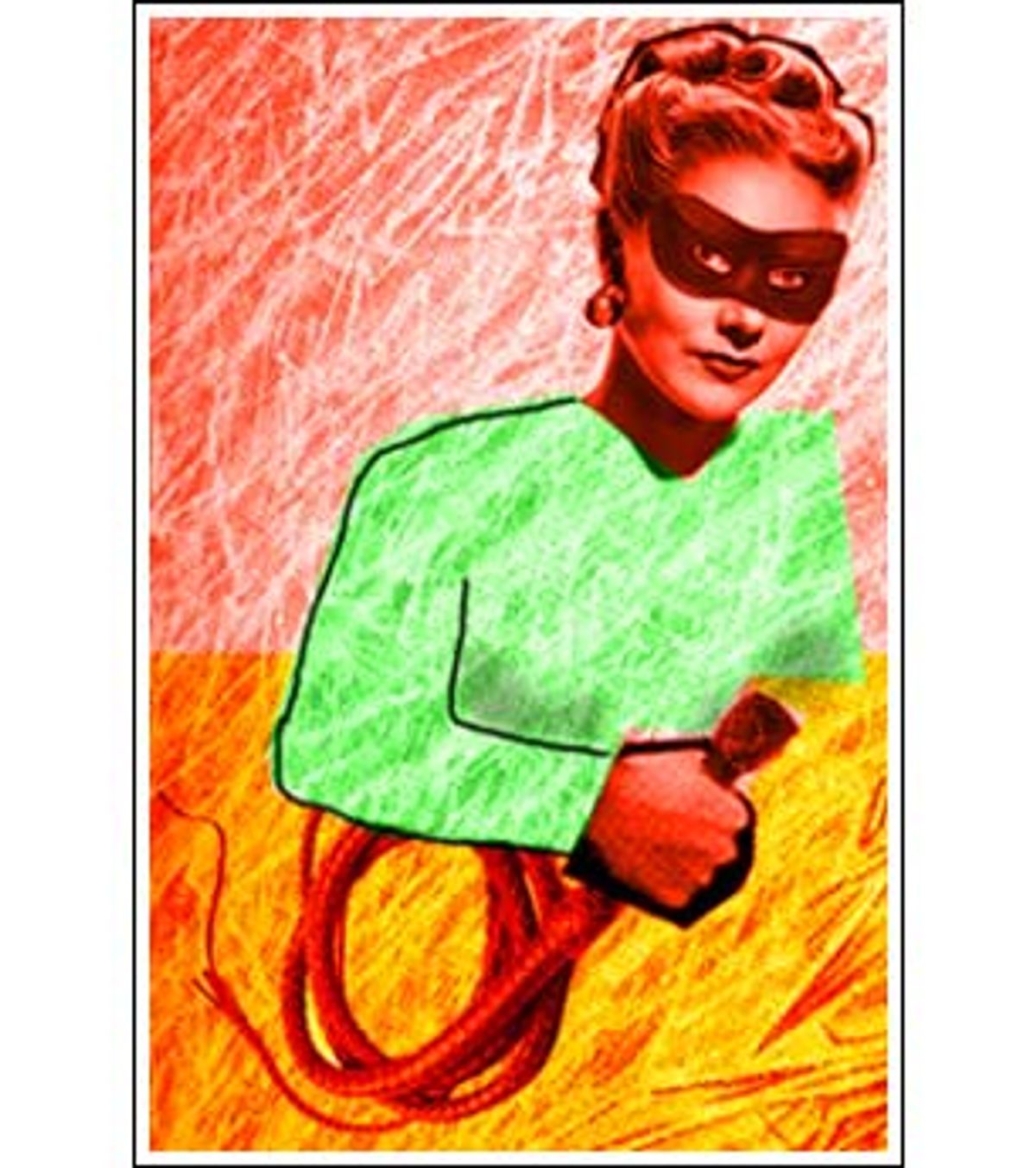 She kept me waiting, which I thought was a little sadistic. When she finally showed, Mistress Payne wasn't what I expected. She was pretty enough, but no knockout. She had reddish hair -- probably colored with henna -- and wore an angular black dress. After we were seated at a window booth, she confessed, "The last time I was at a HoJo, I was a kid -- on Sunday, after church for ice cream."

"I am not a professional," she answered firmly. "That's been really difficult to get across. I am an avid hobbyist."

And what a book it is! It has more instructions on how to tie knots than a Cub Scout Manual. There's an entire illustrated section on how to bind a penis -- a pear used in place of the manly organ.

"So you're a hobbyist?" I asked. She nodded, yes. "You do it for free?" She nodded again. "Is there a network of fellow S&M freaks?"

She laughed. "There are all kind of clubs and organization and parties. Last night I was at an S&M convention in Washington, D.C. They might have 15,000 people attend such events. Things like that go on all the time. There is no shortage of people to play with."

"I'm guessing that men who want to be tied up and beaten are not milquetoast types," I said. "They're in fact bosses."

"It's true for most of the guys," Mistress Payne agreed. "The people I engage with tend to be type-A personalities. It's taking a break for them -- letting someone else be in charge for a couple hours."

"Have you ever encountered a man who wanted to be ordered to take a letter or file things?" I asked.

Mistress Payne smiled. "I haven't encountered anyone who gets off on doing secretarial work. However, I could have a guy in high heels and a maid suit cleaning my house every day of the week."

"And these are bank presidents?"

She didn't answer because the Jamaican waitress arrived with our drinks.

"Here's a fantasy," I said, sipping HoJo joe. "Somewhere there is a restaurant where guys wear female Howard Johnson uniforms and take orders."

The mistress laughed. "'Beat me! Make me wear polyester!'"

We talk about S&M restaurants. "If you'd given me the choice of where to have lunch," she confessed, "I would have suggested Lucky Cheng's."

"Isn't that the joint where Asian men dress like women?"

"Yes. All the waitresses are transvestites."

"But this place is hip enough," I said. The mistress and I were surrounded by chattering tourists.

"This is cool," she agreed. "I would not ordinarily drive to New York to have lunch at a Howard Johnson. I appreciate the sense of humor that goes along with that."

I wanted to know what happened at S&M restaurants. She told me that the staff was dressed in "fetish clothing." Besides a little floor show about spanking, a diner could pay 20 bucks and eat out of a dog bowl or have his or her feet worshipped.

"So do you have a secret identity?" I asked. "Are you Bill Clinton's secretary?"

"No," she answered patiently. "I'm a technical writer for a Fortune 500 company. Can we leave it at that?"

"Did you have an all-American upbringing?" I asked her.

"Yes. I grew up in the Berkshires."

"Yes. Herman Melville country," she agreed, then joked, "My book is sort of like 'Moby-Dick.'"

"How did you slip over to the dark side?" I asked.

"My husband was traveling," she explained. "I'd just gotten a new computer. I was home alone. It came with AOL installed. I logged on for the hell of it. I came to this chat room called 'Le Chateau.' I thought it was people practicing French, but it turned out it was an S&M room."

"How did you introduce this aspect of your personality into your marriage?"

"My husband knew that I had slowly been getting into it," she answered. "I got a pair of handcuffs." She paused. "It was funny -- one day we had been doing spring cleaning and I was taking a shower. When I came out of the shower, he'd found all my illicit materials. And he was standing there holding a riding crop saying, 'When did we get a horse?'"

"Were you waiting for the right moment to introduce it?" I ask.

I laughed. We then discussed global S&M. Most S&M accoutrements are French, but Asians are into bondage big-time -- especially Japanese symmetrical rope bondage, where each knot corresponds to acupressure points. The best handcuffs are British, Mistress Payne informed me.

"You've been talking about dominating men," I said, chomping my burger. "Do you know any women who are submissive?"

"Can I have their phone numbers?"

"Are you friends with anyone who wants to be tied up, spanked, forced to clean the house?" I asked.

"I've never met any woman who wants to be forced to clean the house!" She paused, then told an amazing anecdote that held me spellbound. "I know a woman who is submissive," Mistress Payne said, "but falls into that type-A male personality that we were talking about earlier. She's very successful. She has a fantastic career. Her big thing for a while was really severe pain play. Being flogged. She told me that she'd never been broken. She's always lasted longer than any of the people who had 'topped' her."

"Yes. Basically. Topping is hard work. I told her I would be the one to break her," Mistress Payne recalled. "And I was, but it took a long time -- about an hour and half. It really was a test of wills between the two of us."

(At that moment, the background Muzak, which I hadn't been conscious of until then, suddenly became louder and a British woman's voice belted out, "Ah, wouldn't it be lov-er-lee?" from "My Fair Lady.")

"I'd probably been working on her for about an hour," Mistress Payne continued. "I had done some pretty painful things at that point. I have a flogger that's 32 inches long. Very, very hard thin leather. It hurts like a son of a bitch. No other way to describe it. You can't hit somebody softly with it. It hurts a lot. I put a riding crop in her mouth. And I said, 'I want you to listen to me. I am going to flog you now until you drop this crop. When the crop falls out of your mouth we are done.'

"I knew that she hated being gagged so she wasn't going to last too long. I continued. When she finally dropped it, it was funny. I had her hands tied over her head. She wanted to keep going and of course she couldn't because she couldn't bend over to pick it up. So she was sort of doing this karate kick. I said, 'No. That's enough. I told you that was going to be the end of it.' When you put somebody through something like that, they're getting a huge, huge release of endorphins -- it's like a runner's high. It's exactly the same kind of thing. The body is going through a lot at that point. I undid her arms and for the first couple of minutes they wouldn't come down. And she started to cry. And she cried and she cried and she cried, but it wasn't like a 'Oh, my god this hurts so bad.' It was like, 'I just won the Miss America Pageant' kind of crying."

"I can tell you two things about that," Mistress Payne shot back. "My friend had about two or three orgasms." The mistress paused. "In all honesty, it's a weird mixture of sexuality and I don't know what else to call it. The phrase I was thinking about was [that I'm acting as a ] 'backyard shrink,' but that's not totally accurate. It's knowing what buttons to push with somebody. I can't imagine running into somebody who I would do that kind of scene with again. I don't want to give you the impression that that's my usual modus operandi -- it isn't."

Whew. It was quite a lunch. I paid our bill and tried to make eye contact with our waitress. She looked away. Oh well -- I left a good tip.