As I see it, lying about Santa is like covering for a friend who's having an affair with a jerk. 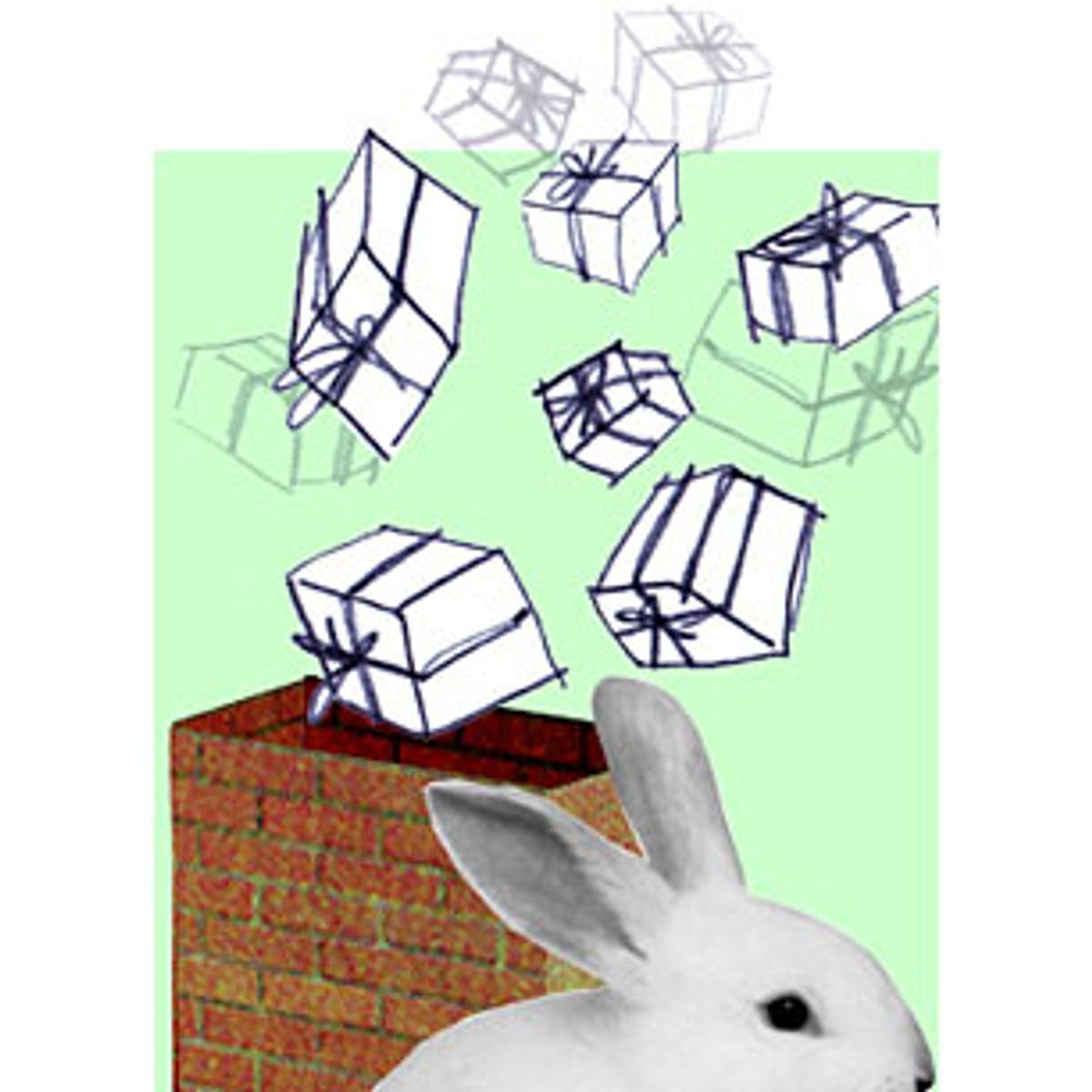 I am not one of those just-the-facts moms who refuses to indulge in culturally sanctioned childhood fantasies. The Easter bunny and I are in an advanced stage of co-dependency. At the drop of a baby tooth, a fairy whizzes into our house under cover of darkness, chunks of change in her tiny invisible pockets.

But I hate being a good citizen of fantasy land when it comes to Santa. As I see it, lying about Santa is like covering for a friend who's having an affair with a jerk. I'll take the shine off the truth now and then for a good cause, but for this guy?

The once innocent saint who put candy in children's shoes on Dec. 6th and encouraged secret acts of kindness has long since become the incarnate spirit of getting. He is a debased pusher for that peculiarly American idea that you get more things, more toys, more clothes, more candy, because you are "good," not because it just turned out that way due to matters of chance, such as what kind of job, or values, your parents have.

Case in point. Last year, we were visiting friends a few days after Christmas. "Look what Santa brought me!" cried the sole child occupant of the household, gesturing toward her playroom, an Ali Baba cave of new toys. Our eldest daughter, then 7, mentally compared her own ample but relatively modest stack, and sighed, almost to herself, "I guess I wasn't that good this year."

You could have knocked me over. "You're not that good any year! " I wanted to shout. "Neither is Lily! No kid is!"

Where had our daughter gotten the idea that if she'd been better behaved, she'd get more presents? Not from my husband or me. We'd never waged an active anti-Santa campaign, but neither had we ever told her that being "good" made you Santa's special friend. We left her on her own to figure out what she'd like to believe about Santa. Big mistake.

Now Mr. Ho Ho Ho had made my daughter feel bad. This brought on the mother bear response, one which I could growl only internally: "Die, Santa. Die."

But what could I tell her? The truth? "Lily has more presents than you do because her daddy walked out on her mommy and feels guilty; her mommy is trying to show her that life without daddy will be just as nice; and her mommy's mommy and her daddy's mommy are trying to show who's the best grandma." Or should I just let it go with a Mae West-ian "Goodness had nothing to do with it."

Obviously, I couldn't say any of those things, or even milder, child-appropriate version thereof. If I did, I would be the evil mother who ruins the magic of Christmas for my daughter. So I've been told. I'm a prisoner of Santa culture, too.

I should have been on the lookout for Santa. I had no reason to be surprised that he had made his way into our daughter's imagination. When I taught classical mythology to hordes of students at Enormous State University, Santa was my gimmick. Through him, I could help the students understand that myth was not some weird feature of the ancient world but a force still at work in our own lives.

On the second day of class, I would pick up my microphone and announce that I was going to sing. As soon as they recognized the song, I said, they should join in. (A singing professor is not easily ignored.)

After we'd given ourselves a big round of applause, I'd analyze the myth of Santa as presented in "Santa Claus is Coming to Town," taking the slightly parodic pose of a visiting anthropologist analyzing a tribal rite. I'd explain that the Santa Claus story functions the way Greek myth did in the ancient world: It enforces cultural values and it offers a kind of parallel-universe explanation of how things work.

An all-seeing god-like figure, an elderly but robust white male, controls the dispersal of goodies. Once a year he comes to your town, and the announcement of his arrival is made in slightly threatening tones: You better watch out. He comes as judge. He decides what's good and what's bad about your behavior according to standards that he and the cohort of ruling elders (parents and teachers) enforce.

The reward for approved behavior is an increase in material goods. The punishment for "bad" behavior, or even protests against the system -- crying or pouting, for example -- will result in deprivation of the same.

They'd laugh, but they'd get it. I'd conclude by saying that the most important point was that they knew the myth without knowing they knew it. They had absorbed its lessons without being aware that there was even a lesson there. Myth works that way.

Well, that was just dandy when I was a single, smart-ass college professor who had not yet swum in the raging sea of reality that is parenthood. Myth does work that way, yes indeed, but now that it's in my house, I'm ready to show it the door. I don't like any of those lessons. I don't want to reinforce the notion that children have to please a remote male authority in order to get what they've been told they want.

In fairness, Santa has been given too heavy a burden. He was never meant to become assimilated to God or even replace him as the bearded heavenly dispenser of blessings, handing out, not grace and salvation, but Pokemon and Gymnast Barbie. Can virtue's true reward really be found in 25 fluorescent-lit aisles of Toys R Us?

But what an all-around player, that Santa. He is now touted as an approved God-substitute for those on strict atheist diets. Book after soppy Christmas book in Barnes and Noble at this time of year fails to mention Christ but claims that Santa is a symbol of the true meaning of Christmas. "Santa," they insist, "is all about love and caring!"

But the Santa we have been presented with these many years, a semi-divine figure who passes judgment and measures his affection in presents, cannot be all about love and caring. He does the opposite of what we try to do as parents. We try to love our children unconditionally. We try to let them know that they are more than their possessions, that there is more to life than acquiring possessions. It's hard enough to do this without such a powerful challenger to our authority.

If I were Latino, or from some other culture that postpones gift-giving until Jan. 6th, the day when tradition has it that the three kings visited Jesus, we'd be better off. But I can't see persuading the kids that it will be fun to be the only ones in the neighborhood not to have opened presents by Dec. 25.

What we finally decided to do was give Santa some competition. Thanks to the inspiration of a friend who is a youth minister, we celebrated St. Nicholas Day on Dec. 6, as my husband did in his European childhood home.

We made St. Nick seem much more fun than the other Santa. The girls (now 8 and 5) made St. Nicholas cookies. They put their shoes in front of their bedroom door on the night of the 5th so that St. Nicholas could fill them with candy and gum. We drew each other's names out of a bowl and for a week did secret good deeds for each other.

I thought that the candy in the shoes would be the hit of the festivities, but the secret good deeds were far and away the favorite. Andrea raced to make Katie's bed in the morning while Katie brushed her hair; Katie left a skull ring Andrea had been coveting on her pillow.

My husband and I got into it just as much as the kids. He pretended not to hear me dragging the garbage cans to the curb at 11 p.m., and I feigned sleep while he did the laundry at 6 a.m.

We're continuing to observe our usual rituals of tree-buying and decorating, putting those fake candles in the windows and a real wreath on the front door, making mounds of technicolor, sprinkle-encrusted cookies that the kids want preserved untouched (no problem).

But as casually as possible, we've been talking with the girls about Santa. We've used the opportunity to do some gentle re-education, emphasizing that no one out there is watching them and keeping a list of the good, the bad and the snuggly.

If we can continue to nudge Santa out of the limelight, Christ's birthday will, I hope, be more like Easter, his second birth, where everyone starts with a clean slate, and the goodies are handed out regardless of one's track record -- by a magical rabbit, of course.

Elizabeth Bobrick teaches classics part time at Wesleyan University and works as a freelance writer. Her nonfiction, fiction and scholarly writing has appeared in national magazines and journals.