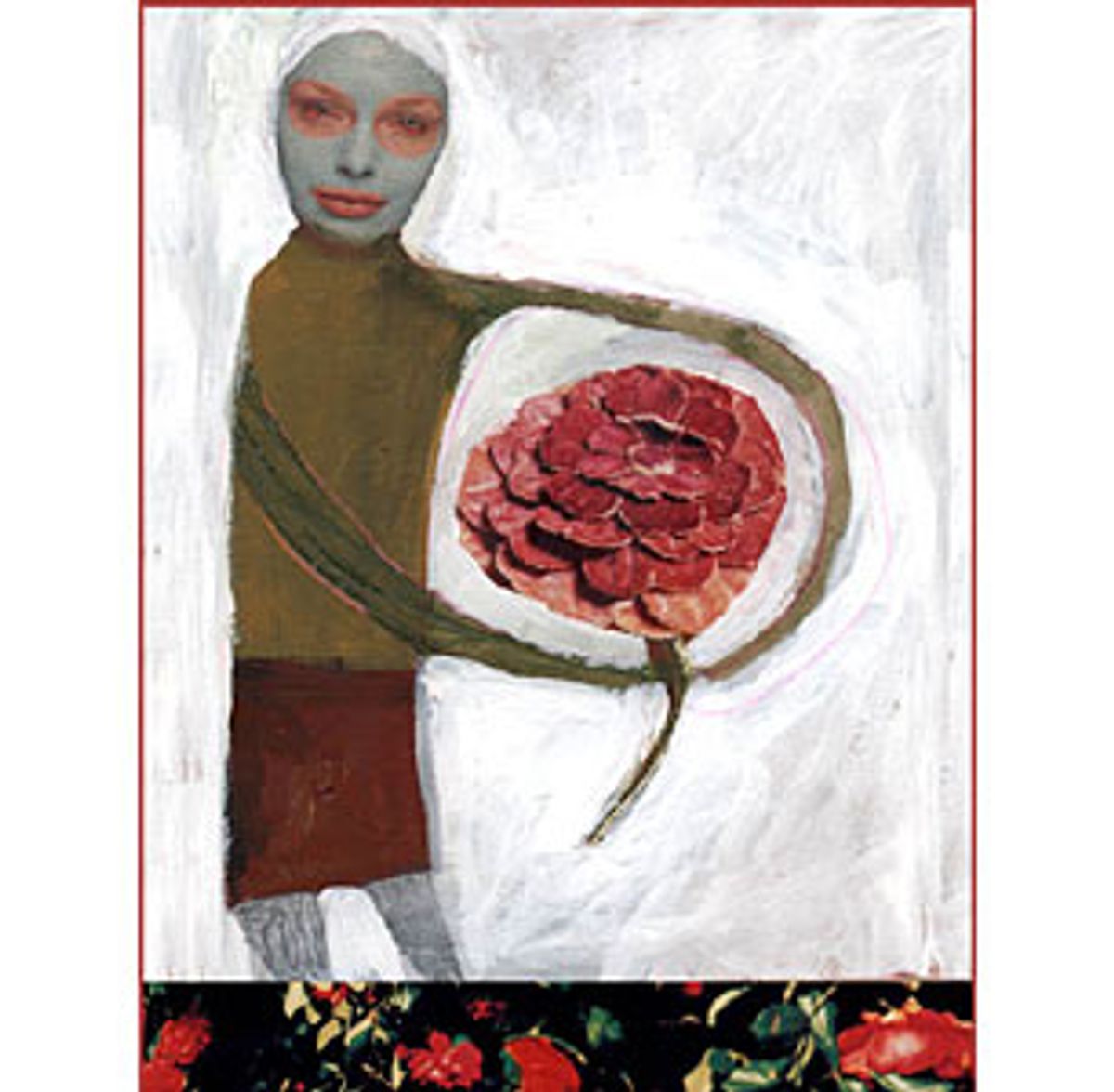 Artists and philosophers (and the rest of us, on occasion) have long tried to make sense of the relationship between life and art. Does art imitate the everyday world, or transform it? And if great art does have the power to enlighten, how can we understand the less-than-enlightened personal lives of many great artists? In 1889, Oscar Wilde wrote: "Art takes life as part of her rough material, recreates it ... keeps between herself and reality the impenetrable barrier of beautiful style." Eventually, Wilde felt, "Life gets the upper hand, and drives Art out into the wilderness." Then the cycle continues. In his new collection, "Trappings," Richard Howard steps into that cycle and examines the curious, symbiotic relationship within it from a dazzling variety of perspectives.

Howard is probably as well known for his translations from the French as for his poetry, and a mesmerizing poem called "The Job Interview" details a meeting in 1957 (when he was 28) with the esteemed Surrealist Andri Breton to discuss a translation of Breton's novel, "Nadja":

I knew the danger:

Ever since Jacques Vachi had overdosed

on opium in a Nantes hotel, naked

I left the Master of the Same New Things

with every warrant of his trust in me

-- but represses his urge to identify his sexual preferences:

of course I knew in my heart that the one

-- O coward heart! would be to challenge this

champion of liberation, this foe of all

society's constraints, but I could do

nothing of the kind,

The poem is a meditation on the way the world struggles to catch up with its own radical instincts, as well as on the way that process is embodied in the conflict between art and life. The homophobic Breton wasn't as open-minded as the artistic movement he led. But as Howard points out, it's possible to circumvent such prejudice for the greater good. He finishes off the poem with a beautiful flourish:

is still in print, and people still hate queers.

I allay that heart of mine with the words

Breton wrote to Simone, first of his wives

criticism will be love, or will not be.

And we're off. This deceptively narrative poem about a meeting is one of many in "Trappings" in which Howard blurs the line between art and life. It's a graceful, insistent argument for the idea that not only is there no way to determine whether art imitates life or vice versa, there is no need to do so.

There are poems that directly address works of art, such as "Dorothea Tanning's 'Cousins.'" On the surface, it's a description of a sculpture, but Howard writes about Tanning's work as though it were a pair of people in the throes of a familiarly complicated relationship:

She came to him in dreams, as he to her

in waking. And that was how they would meet,

ever wrong from the start, however right

for the act, melting

together yet somehow sadly apart,

Other poems address the makers of art themselves. Considering Antonio Canaletto, the 17th- and 18th-century Italian who painted perfect cityscapes, Howard notes that the Venice of his paintings, though it originally came from real life, was ultimately the Venice not of stone and canals but of memory:

but master-drawings in the studio

years on end, a topographical hoax.

The artifice was so powerful that at last "Venice had become/'avec ses palais,/ses gondoles, la ville de Canaletto!'" Life is subverted so completely that on his final drawing, the artist writes the words "Done/without spectacles./A. Canaletto." Reality has been replaced with a vision of what it once was.

The centerpiece of "Trappings" is "Family Values," a series of five poems, each one based on a different artist's painting of the blind Milton dictating "Paradise Lost" to his daughters. Here, with one poet writing poems about paintings that depict another poet in his everyday world, the confusion of life and art is at its most bountiful, and the results are captivating. In "Family Values III," Milton's daughter, Mary -- who is not seen in the 18th-century canvas Howard is writing about -- delivers a monologue that encapsulates the power of vision. Howard imagines her discovering her father and sisters:

I come upon them in the partial dark

(I mean, the shadows

serve what is happening, partial that way)

and make my outsider's discovery:

this moment has no message, no intent

till I descry it!

There has to be a witness to the scene.

Does life truly exist before art discovers it? For Howard, apparently not -- not any more than art can be created without some worldly inspiration.The series ends with a wonderful sendup about Magritte's painting "Family Values," from which the poem series borrows its title. Magritte's interpretation of Milton and his offspring is itself an homage to one of the other Milton paintings Howard discusses in the "Family Values" series. The poem sets up a 1947 correspondence between a flummoxed gallery owner and a Miltonist from Columbia University who has been called upon to help allay charges of obscenity stemming from a planned Magritte exhibit. But Professor Nicolson, too, hits the stumbling block at the intersection of life and art. In the painting, Milton is depicted hovering just above his daughters, each of whom is naked and has a fish head instead of a human head. Nicolson believes that "Magritte is punning/ on "milt" -- fish sperm, you know -- milt on:/ an incestuous poetry." But trying to analyze the painting in intellectual terms, she realizes that what is an established mode of artistic expression can easily be conceived of as perverse.

... Oh dear, I suppose that does sound

rather obscene, though it's a classical

The longer I look, the less I know what

The poem's finale takes the form of the gallery's ad for the Magritte show, which bears this simple, albeit truthful, quotation: "'No modern canvas has/given me more pleasure.'/-- Professor Marjorie Nicolson."

Pleasure, as Howard shows us elsewhere, can be an elusive quantity. A more subtle incarnation of the idea that enjoyment shouldn't be overanalyzed appears in "My Last Hustler," in which the stanzas (bound by strict metrics and a rhyme scheme, which Howard pulls off seamlessly) play out like a set piece, a tableau vivant of sorts. First, the poet lays out the scene:

... "Brad" is lying naked, or rather naked is lying

in wait for whatever those he refers to as clients require

by way of what they refer to as satisfaction ...

On a bed above suspicion, creases in obviously fresh

linen still mapping a surface only a little creamier than

the creaseless hills and hollows of his compliant flesh.

And then the acts (in both theatrical and sexual senses) unfold:

Routines on some arduous rigging, however, can restore

him to himself in mirrors, every which way surrounded

by no more than what he seems and mercifully by no more ...

Fond though your touch may be and truly feeling your tact,

of Every Future Caress, so very like your own!

However entranced the scene you make (the two of you act

as one to all appearance, but one is always alone).

What is artifice if not this peculiarly human role-playing in the name of ardor? In any life, moments arise in which we suddenly seem to be play-acting, based on some idea of what we believe we should be doing, and Howard isnt afraid to confront that tendency.

Neither, however, is he afraid to draw the line between artifice and self-deception. In one of the most candid and moving poems in the book, "For Mona Van Duyn, Going On," he lays bare the continuous struggle to ward off a prefabricated experience of humanity:

Most of us, Mona,

spoil our poems (our lives) because we have

ideas -- not ideas but approved topics

that can be carried around intact.

Poems and lives equally, Howard seems to say, must be constantly re-examined for signs of complacency and tired repetition. To live, and to write, means never to rest easily on a familiar idea of what is correct or beautiful.

"Trappings" ends on a similar note in praise of evolution, in the final lines of "At 65":

will be petrified -- astonished -- to learn

and you -- you are immortal after all.

That Richard Howard's life and work are continuously in progress seems to leave him as awestruck as this wise book leaves its readers. He moves ahead with marvelous aplomb -- he recently turned 70 -- and every few years he lets us in to see the humble, triumphant improvements.