I now know what it feels like to be hated by every guy in a bar because the four hottest girls there are dancing intently around you. And yet, I am not all that distracted. 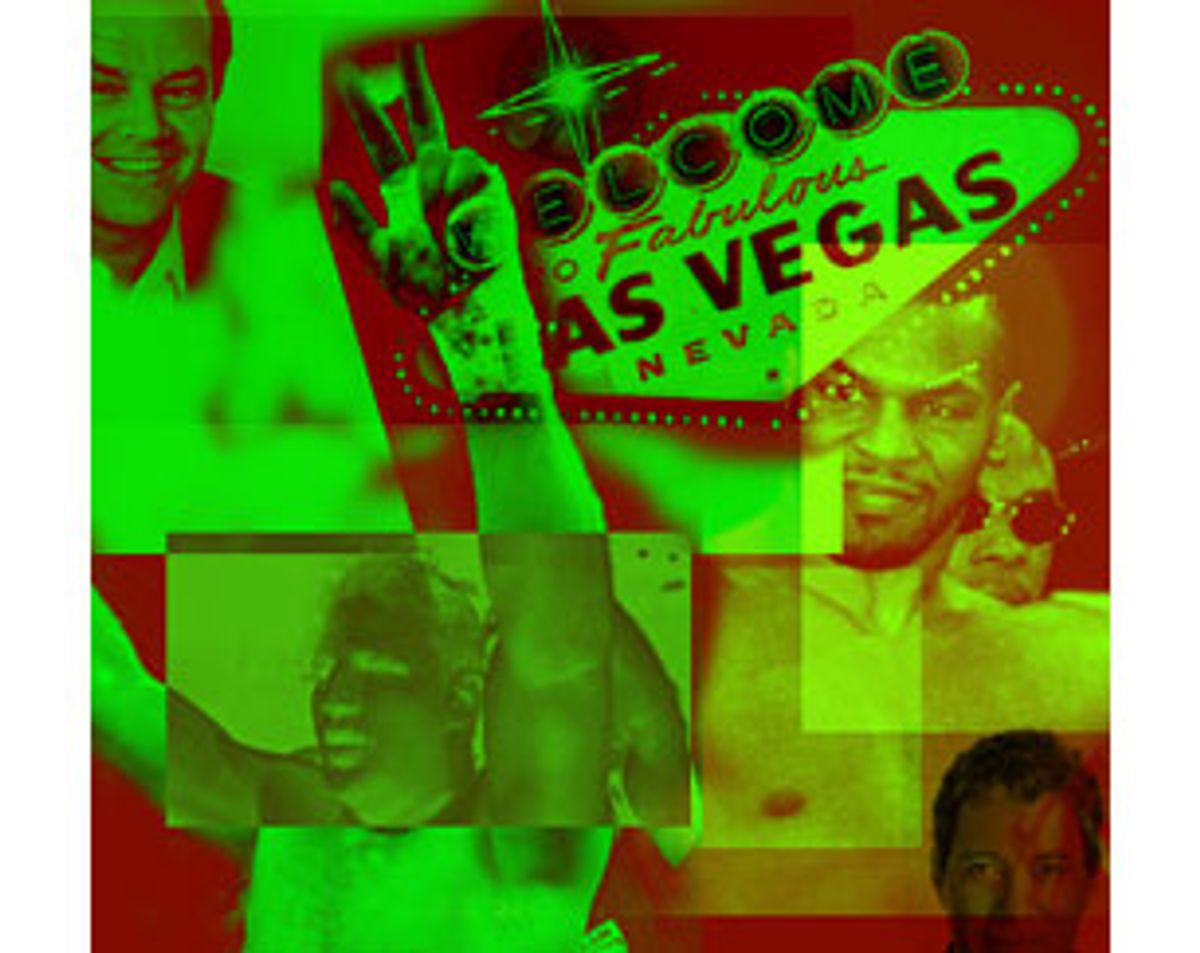 "A man who takes nothing but his wallet to Las Vegas is no one to be trifled with."

There comes a time after you have lived in a new place long enough that you finally feel at home. Mine began in January of this year when I boarded a plane bound for Las Vegas to see the Mike Tyson/Frangois Botha fight:

Scampering down the jetway, I'm carrying nothing but my wallet and a particular type of excitement, a confident bubbliness over things coming. I am not giddy because of the possibilities of what might happen, I am giddy because I know exactly how the trip will go. That confidence, I know now, is what marked the switch.

Squeezing through first class, I glance around a few arms and shoulders and a beautiful blond woman catches my eye. She has an empty window seat next to her.

About halfway through the flight, this woman and the man sitting next to her (recently married, I assume, because of how vigorously they hold hands) decide to look at a photo album. I'm thinking wedding pictures. But of course they're not wedding pictures, they're pictures from the nude photo shoot on the beach the blond woman had done recently. And, surprise, she's not shy about opening the book wide enough so that it gently bumps my thigh. She wants me to look.

The taxi line at McCarran is very long. I stand in it for a few minutes. No one moves. There is a white limo parked across the street. The driver leans nonchalantly against it. He doesn't want to stir up business. He only wants to carry people who come to him. I raise my finger at him from across the street. He nods and chucks his toothpick to the asphalt.

"You going to the Grand?" a guy behind me says. He's with three other dudes. "Throw your stuff in the trunk," I say, and we're off.

Introductions all around. They're from New York. They want to know which strip club is the best. I give them a rundown. They seem pleased with the information. When we get out, I pay the driver.

When the New York boys try to give me money, I shake it off and tell them to buy me a drink at the strip club later. We all know we'll never see each other again. Handshakes, and I disappear into the roiling crowd.

Matt greets me in the lobby of the MGM Grand with a VIP pass and a smile. The place is utter chaos. Pushing through the crowd, we swap airplane stories. He sat with Montel Williams on one of Paramount's private jets. Montel (whom I met later at ringside) is a hell of a nice guy. After relating my story to Matt, it dawns on me how things are different. The old me would have run off the plane and called friends to tell them I sat next to a beautiful woman and saw pictures of her naked. I would have yammered to the limo driver and those guys from New York the entire ride. But I didn't. I didn't tell anybody but Matt, 'cause he already went through the change.

The first person I run into in the VIP area is Jack Nicholson. I mean I literally run into him. Or just about. He hangs up a pay phone and spins around, nearly clipping Matt and me. Jack's in black, including beret, with gigantic sunglasses. His lips are working on the business end of a cigar reminiscent of a horse's penis.

At ringside, Trey and Matt are on either side of me. Montel is to Matt's left, the Wayans brothers to Trey's right. Muhammad Ali is escorted to a seat three rows ahead. Jack is right behind him. Stephen Baldwin is in front of us, screaming his lungs out for Tyson, calling him Mike like they're good friends. Maybe they are, but it's pissing Matt off. So every time Stephen shouts for Tyson, Matt screams "You suck, Mike!" Stephen's pissed. The three of us are pulling for Botha, for no other reason than everyone else is for Tyson. It's not a boxing match, it's a celebrity roast. The stars aren't there for pugilism, they're there to be seen. It's ridiculous.

At least we get to sit directly behind William Shatner.

After the show, we head to the Hard Rock Hotel to meet up with Rick Rubin, head of American Records. He produced the "Chef Aid" album a few months before and everyone became friends. We sit down for a little chow, and I talk boxing with Peter Berg and Anthony Kiedis. They are both very polite. I assure them I am no aficionado, only that I have read the recently published Ali biography, "King of the World." I tell them it is an excellent book. Anthony drinks tea and nods.

Later, I run into Peter at Club Paradise. Trey and I are being escorted into the VIP room when a hand reaches out and grabs my arm. "David!" he shouts. I am pleased he remembers me. He offers me a drink, but I decline. He is too far ahead for me to catch up.

The story ends with me and Trey and two dancers at the Luxor.

So there you are, fragments of the metamorphosis. Which gets me back to the whole reason I wanted to write: Swedish strippers.

You never tell guys there are strippers at a party because then they think they'll be getting lucky later, and they act like even bigger assholes than usual. But let me let you in on a little secret: of the 25 or so dancers I know as friends outside of work, none of them has gone home with a guy from the club. Mostly, it just won't happen. And why? Because when they're at work, you are a big dollar sign. They say and do what it takes to push your buttons and get your twenties. Then, after 4 o'clock rolls around, they're normal girls.

Which doesn't mean strippers are not fun to hang out with outside of work. On the contrary.

Trey put the girls up at the Miramar Sheraton while we had Thanksgiving. The next day we had a writers' meeting, then rendezvoused with our guests about 8. We closed down this new little place, Dado, at about 11:30 and headed home. Trey had to get back to a script. The girls, however, were just getting warmed up. That left me to chaperone.

I now know what it feels like to be hated by every guy in a bar because the four hottest girls there are dancing intently around you, like the devoted around an idol. Walking down Melrose the next evening, it was the same vibe. The stares from these guys said it all. None of them was pleased to see me playing consultant as the girls tried on outfits consisting of little more than a strap and a swatch of cloth no bigger than a half unfolded wet-nap.

What gets me about the whole show is the sheer volume of sexuality nuzzling its way through the nooks and crannies of the house. Beautiful, ripe young bodies scamper about in the very tightest of clothes, pants that begin at the crack of the ass and slither downward in a tight rush. Midriffs reveal ringed navels and hang a delicious breast length away from warm skin. And yet (I know you won't believe this) I am not all that distracted. Yes, a little. But I don't feel excited. My own routines concern me more. Like on the plane going to Vegas, I am confident about the outcome of their visit. It goes exactly as I imagine.

Still, after they've gone, back to Sweden, London, back to those other worlds, I feel a little sad in the empty house. In a few days I will be glad there is no bustle. But not just now.

In the hot tub I marvel at the clear night as the lights from Century City shine crisply up the valley at me. I turn the jets off and sit in a still quiet as the full moon hangs cool as an Altoid above a distant Hollywood.