Foreskin and several years from now

My husband has dedicated himself to the proposition that he can form a more perfect penis. 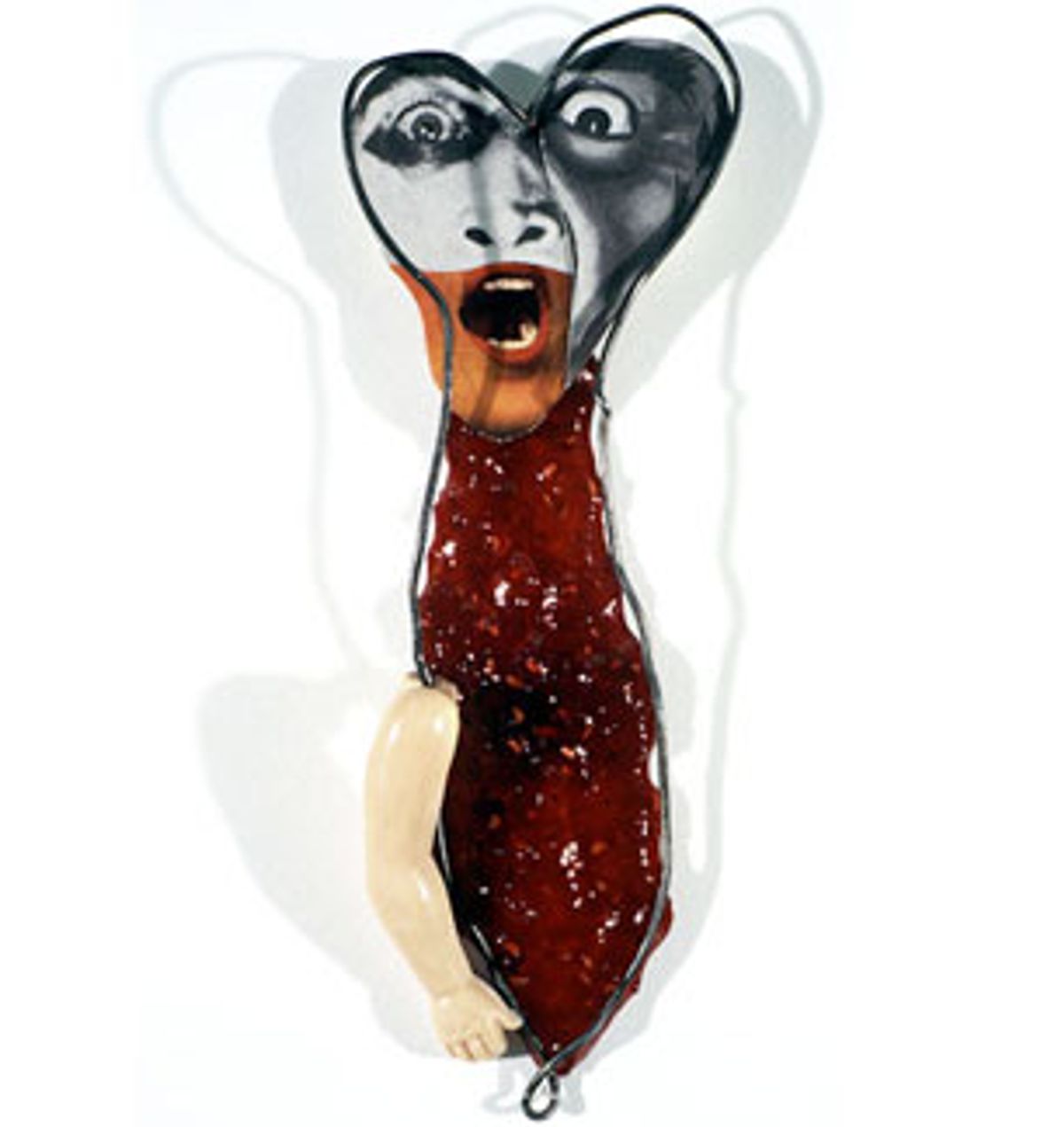 My husband had just announced his newest do-it-yourself project.

"I'm going to re-grow my foreskin. Here's a book about it."

As the book slid across the table, my mind swirled with "Young Frankenstein"-type images of Gene Wilder holding a home skin-grafting kit and Marty Feldman standing near a refrigerator full of gelatinous brown blobs growing in petri dishes.

"It'll take awhile; it's a very gradual process," he said.

"See," his hands began an illustrated dance in the air, "you pull the skin from the shaft up over the top of the penis, tape it, then apply constant tension, causing it to stretch and grow. It's called 'tugging.' Eventually, after a few years, the extra skin is long enough to cover the glans and act as a makeshift foreskin.

"I'm going back to do some research on the Internet," he said, and casually tra-la-la-d past my petrified cadaver of a body, practically skipping on his way to the room he uses as a home office.

What just happened here? I thought. Did I hear the word, "years"? I followed in hot pursuit.

"Where did you hear about this?" I questioned.

"In men's group," he mumbled, barely looking up from the computer. "They say once you're restored, you can have up to a 30-percent increase in sensation. Plus, I really want to look like our sons."

I knew it! That damned men's group, the one I frequently credit with saving my husband's life and our marriage, as well as making him emotionally whole again, is also the one that has introduced him to the sometimes radical ideas of the new Men's Movement: that smaller, fewer-axes-to-grind, reverse-gendered twin of the '60s feminist confab.

Invariably, the morning after group night there is a large leaflet strategically positioned on the suspiciously bare kitchen table. Curious, I wander over with my cup of coffee, sit down and begin reading about the unbelievable orgasmic nirvana I could provide my male sex partner if only I'd strap on an elbow-length latex glove slathered with about a jar of lubrication, enter what's usually an exit, then fish around for the male G-spot located just an inch or so below said partner's Adam's apple. If I'm lucky, there'll be a grotesquely detailed accompanying diagram with You Are Here marked on the anus.

My husband's group must reserve the last five minutes of each session for wife-shocking leaflet distribution. "Sorry, Tom, we'd really like to hear more about your feelings of unimportance, but it's LEAFLET TIME!" High-fives and whoops abound.

What baffles me is how I'd missed the foreskin restoration leaflet.

Worry rapidly filled my thoughts. Had anyone done this successfully before? Surely there is a risk of permanent disfigurement when you decide to grow new pieces of your body. Did my husband draw the shortest straw at men's group?

I was a bundle of festering questions, but I decided it was best not to grill my husband just yet. I was afraid that if I made too strong a case against this process, or especially if I questioned its validity too quickly or vehemently, I might stoke his desire to proceed. Maybe he's just exploiting the shock value of it all, I lied to myself. Maybe it's a Drama King thing and in a short while he'll lose interest.

It was a day or two later that they started appearing all over the house: miniature treasures left behind by the absent-minded Foreskin Fairy. Coin-shaped pieces of tape, some featuring crudely hacked holes in the center and others festooned with clumps of gnarled pubic hair, would stick to the bottoms of my feet. A thin white strip of elastic, formed into a loop and then sewn together with erratic, black, big-as-a-staple stitches, like some "Flintstones" hair holder, showed up. And then there was my favorite: a warped little disk of forged and hardened clay possessing what appeared to be a teeny-tiny handle right in the center. It was like the Lilliputian Refuse Service had accidentally left behind a trashcan lid.

"Honey, have you seen Greyson's blue suspenders?" I called from my son's closet, where I'd been on the floor rifling ineffectively through train tracks, stray Legos and other fragments of boyhood in search of my elasticized quarry.

"I'll be out in a minute," my husband trilled from behind the bathroom door.

An hour later I heard him emerge and scuttle back to his office, closing the door behind him. I thought nothing of it until I noticed the frayed chunks of leftover suspenders scattered in the bathroom trash.

"Did you cut up these suspenders?" I asked hesitantly.

"Yeah, I needed them. I'll get Greyson some more."

I could just barely see a section of suspender peeking out of his T-shirt.

So began my introduction to the first in my foreskin farmer's series of cobbled-together suspender-remnant contraptions known as: the Devices.

Crude, yes, but fascinating in an "Inspector Gadget" sort of way. The first one featured a large loop to slide the left arm through, leaving the remainder of the suspender strap to trail down the left side of the body. A clip at the end of the strap attached to tape stuck around the penis. At first glance, the whole ensemble sort of resembled a stopgap holster and quickly earned the name, the OK Corral-er.

His poor penis looked miserable, strained and reddened, like it was struggling in some Torquemada-inspired mechanism from the Oscar Mayer Inquisition.

A few weeks later came the Formal -- so named because at a distance it appeared as though my husband was wearing a long, black necktie. One rather tight elastic loop fitted around his neck, with the remainder of the strap trailing down his chest and belly to the taped penis. I have a fondness for this model because it's the only one I laughed at out loud -- to his face, anyway. It just looked so damned dangerous. What if the loop suddenly cut off his air somehow, like when he was driving?

"If you have an accident with that thing on," I remarked, "don't expect me to come claim your body."

After the first full day of wearing the Formal, my husband seemed to be hobbling around more than usual. He said his penis was once again sore from the constant "attention." Seconds later, our 4-year-old bounded into the room, jumped on my husband's lap, yanked the elastic strap and said, "Hey! What's THIS?" I'd never seen a person completely fold in half so quickly.

Finally, after a brief trial-and-rejection period of the Fred Mertz -- consisting of a strap leading from the clip on the penis down the right leg to a tight loop just below the right knee, resembling an upside-down sock garter popular with some older men -- the Hipster made its debut as the most discreetly designed and most popular model. It featured a strap made into a hip belt with a perpendicular segment in front that clipped to the taped penis. At least this device is hidden completely from John and Jane Q. Public. But then again, John Q. himself might be a tugger.

While waiting for my husband to grow disenchanted with his project, I did a little independent tugger research of my own. According to statistics provided by NORM (the National Organization of Restoring Men), there are approximately 18,000 known tuggers, as well as countless more unreported members (ahem), mostly in the United States.

Printed along with the statistics were stories promising the heightened glans sensation to which my husband had referred, as well as details regarding a much-desired effect known as the "gliding sensation," a perk that occurs during sex. Apparently, once the restored penis is inserted, the extra skin on its shaft causes the exterior to remain relatively static while the interior of the shaft does its business. This gliding effect, done with little or no friction, is purportedly much more pleasurable for both sex partners. Could be interesting, I thought.

Like my husband, some tuggers are using the elastic strap method to stretch the skin around their penises, while others are reportedly donning outrageous Monty Python-like contraptions -- from old fishing weights that accidentally fall down and out of a pant leg during board meetings, to detached mouthpieces lifted from old trumpets, trombones and tubas. (Blow jobs will just never be the same.)

One discovery that has definitely managed to quiet the sarcastic witch living inside of me is the impressive electronic support system available to tuggers. Dwelling happily on the Internet is a well-established cyber community where learned members share advice, helpful hints and even personal photos of the restorative process. Savvy members are known to pepper their posts with the trademark signoff, "K.O.T." (Keep On Tuggin') or with special Tugger emoticons concocted and recognized by the group:

It's been almost a year since my husband began his quest for a foreskin. Aside from the occasional, "Not tonight, honey, I've got a dick ache," our sex life remains as healthy, active and normal as ever. There is the occasional dash from sight to disassemble the foreskin machine, but I've grown accustomed to it.

I've also grown accustomed to him going through more medical tape than an ER and spending as much time in the bathroom as a pre-pubescent schoolgirl. I imagine that he, in turn, has grown accustomed to my occasional comments, like, "How's the slingshot this morning?" and "Could you unhinge your iron maiden so we can have sex?"

The only thing I'm not sure has grown, however, is his foreskin.

Although from my vantage point his penis appears exactly as it did when he started the project (he swears there's been marked progress), I do wonder what it will look like when the process is complete. Will I find its floppy little turtleneck of skin enticing? Will my husband have the wherewithal and dedication to see this day-in-day-out project through to completion -- especially if he should have to begin working in an office away from home? What will happen if he decides to stop tugging mid-turtleneck?

Also, since circumcision continues to be a routine procedure, I can't help but wonder if tugging might eventually become a mainstream interest. Can we expect a full array of Tugger-related products? Tugger Brand Tape? Wear Your Device To Work Day? "Tugging for Dummies"?

Whatever happens, I'm confident that I'll be kept in the know through the regular consumption of men's group leaflets.

Kim Lane is a freelance writer whose work has appeared in magazines such as Mothering and Profit, as well as online at Moms Online and Myria magazine.