The empire winds down

China's assumption of control over Macau on Sunday writes the final verse in the epic of European colonization in Asia. 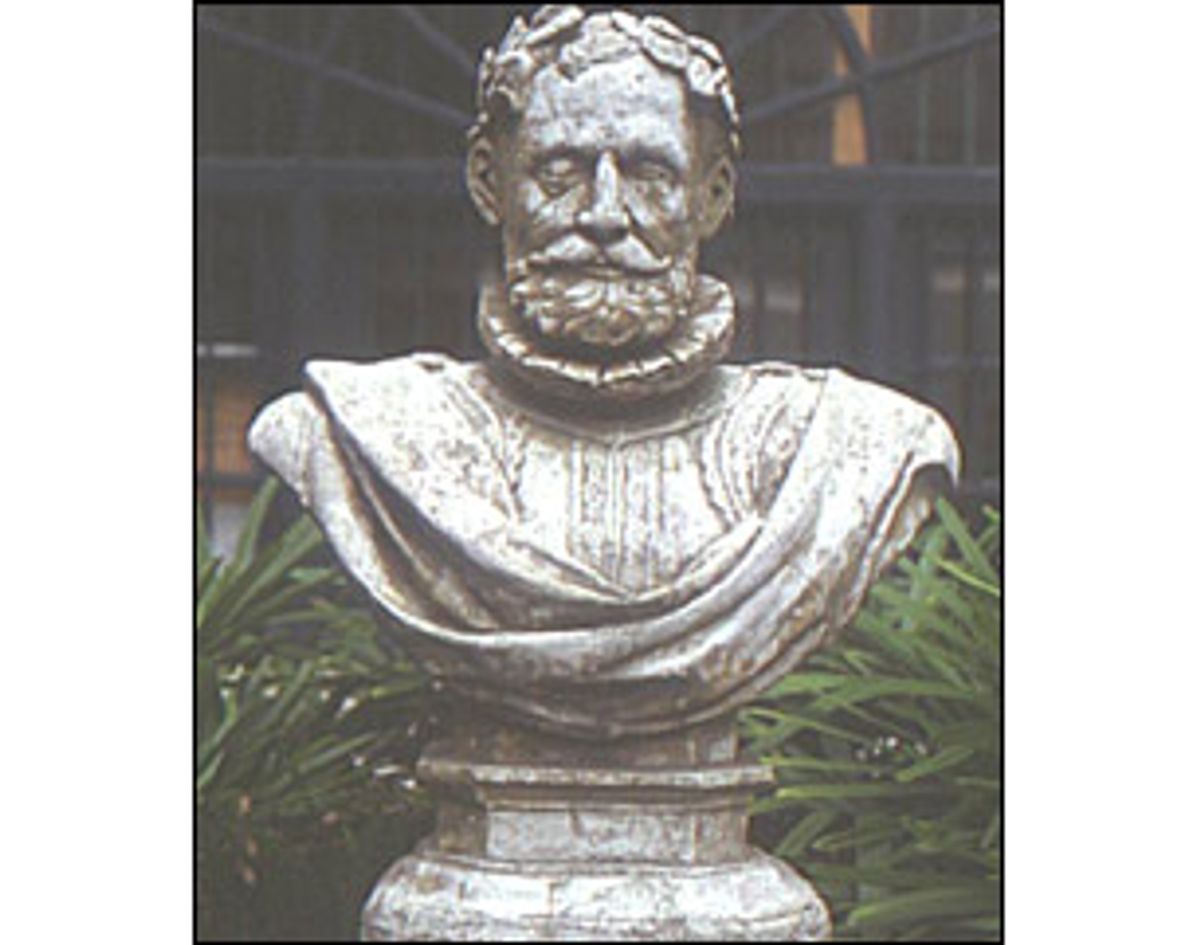 "For all your arrows tipped with poison,

The curved daggers you bear as arms,

All will be subject to the Portuguese."


Compared with the high-profile Hong Kong handover back in 1997, the formal
withdrawal of Portuguese officials from Macau late Sunday night is shaping
up to be a relatively minor event in the Millennium-fogged eyes of the
international news media. With big business and civil liberties hanging so
publicly in the balance, foreign correspondents simply couldn't resist the
allure of Britain's controversial exit from Asia, and they dutifully endured
torrential rains, oppressive summer heat and extravagant late-night handover
parties to bring the story to the world. But across the Pearl River Estuary
in Macau, the resumption of Chinese rule has long seemed like a fait
accompli, yielding meager fodder for sexy headlines beyond the occasional
eruption of gang violence in the waning months of Portuguese administration.

In a broader historical sense, the impending change of government in Macau
has far greater symbolic importance than the territory's size or current
economic status would suggest. When the big countdown clock in Tiananmen
Square strikes zero and the Chinese flag is raised over this diminutive
slice of coastal real estate on the South China Sea, nearly 500 years of
colonial occupation will come to an end as Portugal, the first Western
European nation to expand into Asia, becomes the last to leave. And at that
very moment, the final dissolution of Lisbon's erstwhile Asian empire will
deliver a conclusive coup de grbce to the supremacist fantasies of a
swashbuckling 16th-century poet whose magnum opus, "The Lusmads," is
considered the crowning work of Portuguese Renaissance literature.

I first encountered this extraordinary figure on a bright summer morning in
the inner courtyard of the Leal Senado, just off Macau's exquisitely
preserved central plaza. In an intimate formal garden below the dear old
municipal library, I happened upon the stone bust of a bearded man with
European features and an unruly crop of windblown hair, one eye curiously
closed in an eternal, joyless wink. An inscription in both Western and
Chinese characters identified the statue as:

At the Macau Museum later that day, I learned that Camues settled briefly in
Macau in the mid-1500s, and that parts of his most famous work are thought
to have been composed here in a public garden that now bears the poet's
name. Later still, after tracking down an English translation of "The
Lusmads," I began to grasp the full irony of Camues' official canonization on
the soon-to-be-Chinese soil of Macau.

The son of a sea captain, born in Lisbon and educated at the University of
Coimbra, Camues began his career as a tutor in the court of King Joco III,
only to be banished in 1546 for pursuing a forbidden love affair with one of
the queen's ladies-in-waiting. Still in his early 20s, he joined a
Portuguese military garrison in Morocco, where he lost an eye battling the
Moors, and a few years later he was jailed back in Lisbon for injuring
another man in a street brawl. He subsequently traveled by sea to the
Portuguese settlement at Goa on the west coast of India, then continued east
to the Spice Islands and southern China, where he spent two years as a
functionary in the recently established colony of Macau. Recalled to Goa in
1558 on charges of extortion, he survived a shipwreck at the mouth of the
Mekong River, abandoning most of his possessions to the waves but clutching his
precious unpublished manuscripts as he swam to shore.

Over the next 10 years, Camues grappled with criminal charges and financial
woes in Goa and Mozambique before finally borrowing enough money to return
to Lisbon in 1570. "The Lusmads" was published two years later, giving Camues
the distinction of being the first notable European literary figure to pen
eyewitness accounts of life in Asia, and posthumously earning the poet a
prominent place in Portugal's national pantheon.

A sprawling, spirited epic deliberately cast in the mold of "The Aeneid" and
"The Odyssey" -- complete with pagan gods and goddesses watching over a
distinctly Christian protagonist -- "The Lusmads" concerns Vasco da Gama's
historic voyage around the southern tip of Africa to India at the end of the
15th century. A few years after Christopher Columbus sailed the ocean blue
and claimed the West Indies for Spain, da Gama set out in the opposite
direction to chart a viable maritime trade route between Europe and the
lucrative spice markets of the Far East. His journey paved the way for
Portugal to become a dominant world power in the early years of European
empire-building, making him a true hero in the eyes of Camues, whose
occasional run-ins with Portuguese law seem not to have soured his deeply
held sense of national pride.

Upon da Gama's triumphant return to Lisbon in 1499, the Portuguese wasted no
time in leveraging their superior seafaring skills to forge a network of
colonial outposts along the east coast of Africa and across the Arabian sea
at Goa. With a firm base on the subcontinent, the Portuguese continued their
conquest of Asia by capturing the thriving mainland port of Malacca and
founding colonies in the Malay archipelago at Timor Island and the Moluccas.
By 1520, Lisbon's reach extended as far as the southern China with several
outposts near the mouth of the Pearl River, later
consolidated at Macau.

"The Lusmads" paints a heroic portrait of these early colonial conquests, and
in a fanciful discourse on European history, the poet traces Portugal's
manifest destiny back to the ancient Roman province of Lusitania, and casts
his own people as the divinely sanctioned rulers of the Eastern lands they
conquer. In Camues' telling, the gods are so pleased with da Gama's
exploits that they arrange for his men to make landfall in the course of their
return journey at an enchanted isle stocked with a bevy of amorous nymphs.
This sets the stage for a hilarious account of crusty, unwashed sailors
pursuing nubile seductresses through a verdant tropical paradise as carnal
compensation for a job well done ("Some pretending to be troubled less/By
shame than by action, scampered/Naked into the bush, letting them see/Just
where their itching hands would like to be").

The epic ends on a more somber note, however, for by the time Camues arrived
in Asia half a century later, Portugal's fortunes had already begun to fade.
With other European nations muscling in on the spice trade and Lisbon's
limited resources thinly divided among far-flung campaigns in Africa, Asia
and South America, Portugal's initial success as a colonial superpower was
showing serious signs of decay. In the final stanzas of "The Lusmads," Camues
bemoans a nation "given over/To avarice and philistinism,/Heartlessness and
degrading pessimism," and he calls for a return to the courageous spirit of
da Gama's generation, "that no wondering/German, French, Italian, or
Englishman/Can boast Portugal is more commanded/Than given to exercise
command." In 1580, the year of Camues' death, Phillip II of Spain annexed
Portugal, and by the time Lisbon regained independence in 1640, the old
Portuguese empire was in shambles, with Britain and the Netherlands
controlling most of the Far Eastern trade routes first pioneered by
Portuguese explorers.

Prized in Portugal both for his considerable literary artistry and his
lyrical veneration of Portuguese identity, the outlaw poet once exiled from
Lisbon has since become a national hero. The anniversary of his death, June
10, now marks Portugal's National Day, and Macau's territorial government
has annually honored Camues on that date with formal ceremonies in the
Camues Garden, a hillside park where the poet is said to have sought his
muse during his brief sojourn in the territory.

Strolling through the garden on a hot July afternoon, I found Camues'
legendary haunt peopled by elderly Chinese men in sleeveless white
T-shirts and dark trousers rolled up past their knees, some gently
exercising, others splayed on benches listening to crackly portable radios.
At the commemorative bust fixed in its shady stone grotto, I paused to
reflect on Camues' elusive dream of Portuguese crusaders "Venturing as far
as remote China/And the most distant isles of the Orient,/Until every
sea-way is subservient," and I wondered if the citizens of the Macau Special
Administrative Region of the People's Republic of China will continue to lay
flowers here on the anniversary of his death. Then, gazing out over a jumbled
gray cityscape toward the Chinese border, I imagined the poet's poor
disillusioned ghost regarding the handover through his one good eye,
lamenting the last dying ember of the Oriental empire he once championed so
passionately in verse.

Morris Dye is a writer and editor who lives in Bangkok.