Mumia Abu-Jamal may be a symbol of racism to the celebrity set, but to most black people, he's just a scary character who probably got what he deserved. 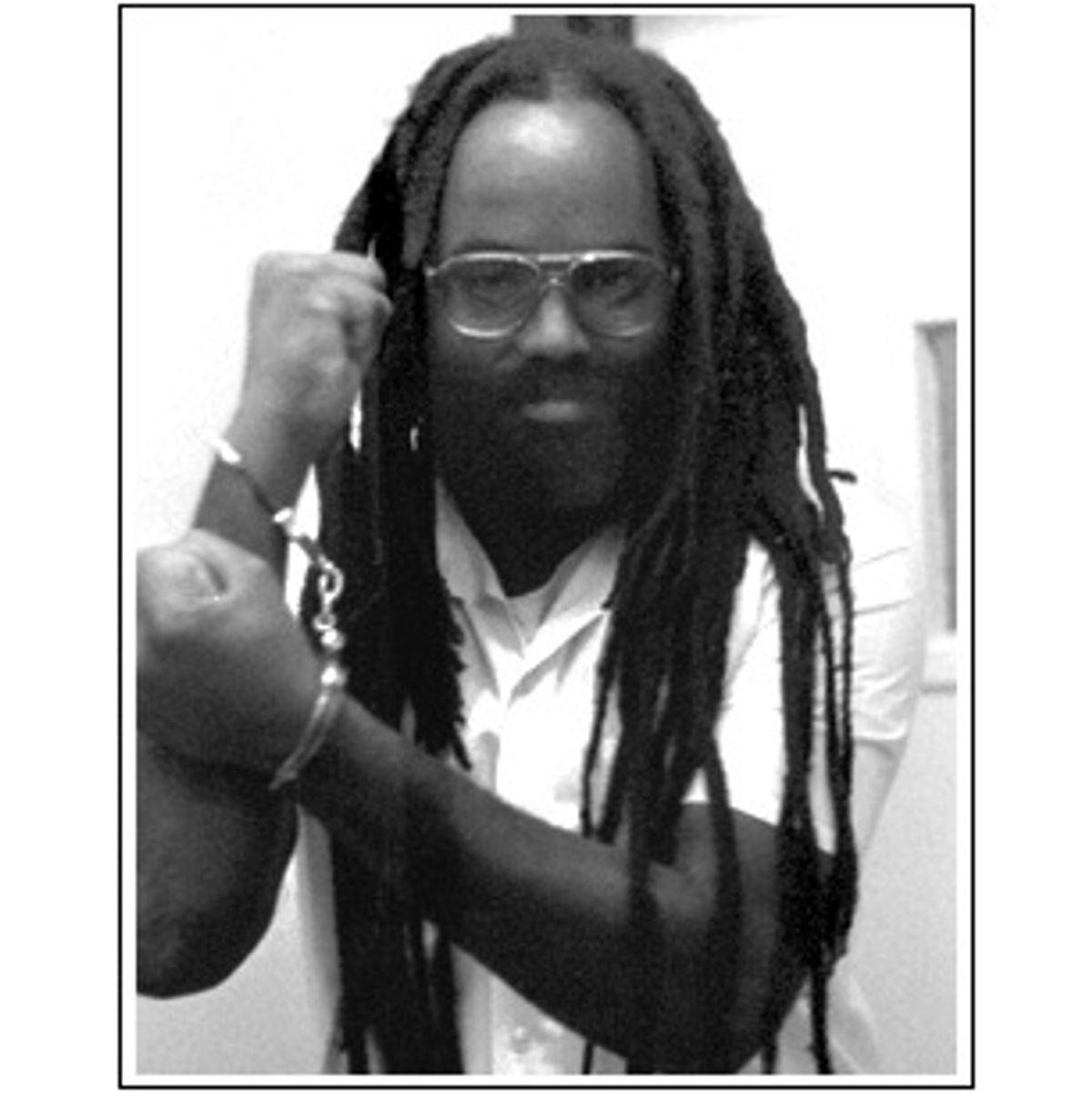 Depending on who's doing the talking, convicted cop-killer Mumia Abu-Jamal is
either a race-maddened psychopath cynically manipulating the gullible into
helping him get away with murder, or an innocent artist and revolutionary
railroaded onto death row by the racist forces of oppression.

Whatever the truth of the matter, the dreadlocked Mumia (so famous that
he's now down to just one name) is a potent reminder that we're far from
through with the past when it comes to racial politics in America.

Centuries of racism, and the corrupt government structures that
enforced it, are still a radioactive part of our living memory and will remain so for at least another generation. That means there will almost
certainly be more of these racial cause cilhbres in our future. After all, we've only had one generation since the triumphs of the civil rights movement to unlearn 350 years of hate and mutual suspicion.

Maybe it's because we're still wearing our egalitarian training wheels that
the overarching issue of the role that race plays in the Mumia case has
eclipsed other critical questions that bear analysis in their own right.

One of those is Mumia's fitness to be held up as a racial hero and martyr
in the first place. Who gets to decide that question?

The basic facts of the criminal case against Mumia are simple. Around 4 a.m. one December night in 1981 in a seedy area in Philadelphia, a 26-year-old
police officer named Daniel Faulkner stopped a car going the wrong way down
a one-way street. A 27-year-old cabdriver (and radical journalist) named
Mumia Abu-Jamal (ni Wesley Cook) was parked nearby and
saw the officer bludgeoning a man who had gotten out of the stopped car --
a man who just happened to be Mumia's brother, 25-year-old William Cook.

What happened next is in dispute. But soon after, Faulkner lay dead on the
street, having taken one bullet in the back and one
between the eyes. Mumia slumped nearby, shot in the chest. Responding
police found Faulkner with most of his head blown away and Mumia fallen to
the curb with both his holster and his gun empty.

Seventeen years, two appeals and two execution warrants ago, a jury
found Mumia -- who has never told his side of the story -- guilty of first-degree murder. His most recent date for execution -- Dec. 2 -- was
stayed pending further legal appeals of his conviction.

Mumia's supporters claim that the police rushed to judgment in their haste
to nail someone for Faulkner's death and didn't pursue exculpatory
leads. (Some witnesses claimed they saw a third man flee, for example, and
Mumia's empty gun might have been a different caliber than at least one of the bullets
found in Faulkner's body.) But Mumia hardly cut a sympathetic figure; his radical politics (he'd founded the Philadelphia chapter of the Black Panthers at age 15) did not endear him to the police or prosecutors. His supporters believe that his trial was essentially a sham.

Over the years, as news of Mumia's fate has spread, demonstrations have been
held on his behalf all over the world. Celebrity backers have championed his
cause, documentaries have been made about him and Mumia himself has
reactivated his moribund journalism career from death row.

Police organizations have been equally energized by his
case -- from the opposite perspective. On a number of occasions, they've had to be coerced into providing security for Mumia benefit concerts and for his celebrity supporters; meanwhile, they've funded appearances by Faulkner's widow to counter what they see as the glorification of a cop-killer.

Right-wing commentators and conservative groups have joined the fray, so much so that smearing Mumia and his supporters has become a staple of the shock-show set.

So much for the left and the right. But what about African-Americans?

Contrary to stereotype, blacks as a group tend to be social conservatives,
very tough on crime and not at all sympathetic to radical chic trends. Furthermore, they
are unlikely to know, or care, about characters like Mumia.

David Bositis, a senior political analyst at the Joint Center for Political
and Economic Studies who has analyzed political trends in the black
community for years, says he wouldn't squander a survey question on Mumia.

"I suspect that, on a national survey, probably 10 percent or fewer would
be aware of him," Bositis says. "I tend to doubt that there'd be a
groundswell of support for him. Why him? There are many better examples --
[Abner] Louima, [Amadou] Diallo, Rodney King even."

Those blacks who are aware of Mumia have long exhibited ambivalence
toward his cause. Mumia is a working (if unconventional) journalist and
a past president of the National Association of Black Journalists
(NABJ) chapter in Philadelphia, yet the NABJ "takes no position" on his
case. (Individual black publications have published Mumia's work, however,
and some have called for his release or retrial.)

Those black leftists and nationalists who support Mumia know that they need
to win the hearts and minds of average black people over to his cause.
Angela Davis, for example, bemoans the lack of involvement of black
ministers in the battle. "I am going to challenge the clergy in
Philadelphia to join the push to stop the execution of Mumia," Davis told
the Village Voice recently.

The Rev. Al Sharpton, interviewed in the same article, agreed, "These ministers have
the political clout to let [Pennsylvania] governor Ridge and others know that
they would not allow them to do this. This cannot be seen just as 'a
left-wing movement' -- there must be across-the-board resistance. I am
going to tell them that if they do not stand with me to stop the execution,
the blood of Mumia Abu-Jamal will be on their hands."

Most black folk might just disagree with that conclusion. Instead,
they may believe Mumia has only himself to blame for his predicament and
that the campaign to save him really is just a left-wing movement of the
type they long ago rejected.

Besides his involvement with the Panthers, Mumia was such an ardent
supporter of MOVE -- the radical black nationalist movement that was
eventually firebombed by the city -- that it cost
him his perch in journalism and sent him instead into the driver's seat
of a cab to support his three children.

In truth, Mumia is the kind of angry black man that many blacks
instinctively reject. He scares most black people, just as he scares most
whites.

This makes sense: Blacks have for so long been on the receiving end of
black violence and crime that they are sick of it, and are deeply skeptical
of any calls for racial solidarity on behalf of convicted murderers like
Mumia. According to Bositis, when black respondents are asked about
drug penalties, they overwhelmingly favor harsh penalties.
Furthermore, a huge majority -- 75 percent -- support mandatory
"three strikes" laws that put repeat offenders in prison for life.

But blacks' reality is a complicated one, because they live in a world
bounded by residual racism on the one hand and black-on-black crime on the
other.

Sixty-nine percent believe that racial profiling "usually" happens, for
example, and 44 percent say they have been stopped "for no
apparent reason" while driving. (Many refer to it as a case of "DWB" -- driving while black.) Fifty-six percent say police brutality and harassment are still serious problems where they live.

Yet New York City blacks widely supported a white man, Bernard Goetz, when
he shot fleeing black thugs in the back. In the crack- and gun-ridden
1980s, no one suffered more than black people; one result of this is that they have no trouble sending violent blacks to their just rewards.

In the Mumia case, his supporters understand that black community
involvement is the missing link in their argument that he was targeted
because of his race and his politics; they are working strenuously to
galvanize blacks in the battle to save Mumia's life. His lawyers speak at
black churches; Rev. Sharpton harangues his fellow ministers; grass-roots
activists try to activate the grass roots.

But if Mumia himself really wants to gain the sympathy and support of
regular blacks, he might want to cut his hair, change his name back to
Wesley and join the prison gospel choir. Blacks know racism, and
they know it's become ever more subtle, and therefore ever more difficult to prove. But they also know they can't let racism drive them around the bend and deprive them of their ability to think clearly. They are instinctively suspicious of a man who's found wounded and woozy with an empty gun and the body of another human being nearby in a seedy part of town at 4 a.m. Especially when that man is a "wild-eyed radical" with whom they have nothing, except race, in common.

That's why, even though the usual suspects are making the usual claims on
behalf of "black Americans" in the Mumia case, actual black Americans are
by and large sitting this one out.