The federal sex case against Patrick Naughton falls apart as jury and old friends see something other than a monster. 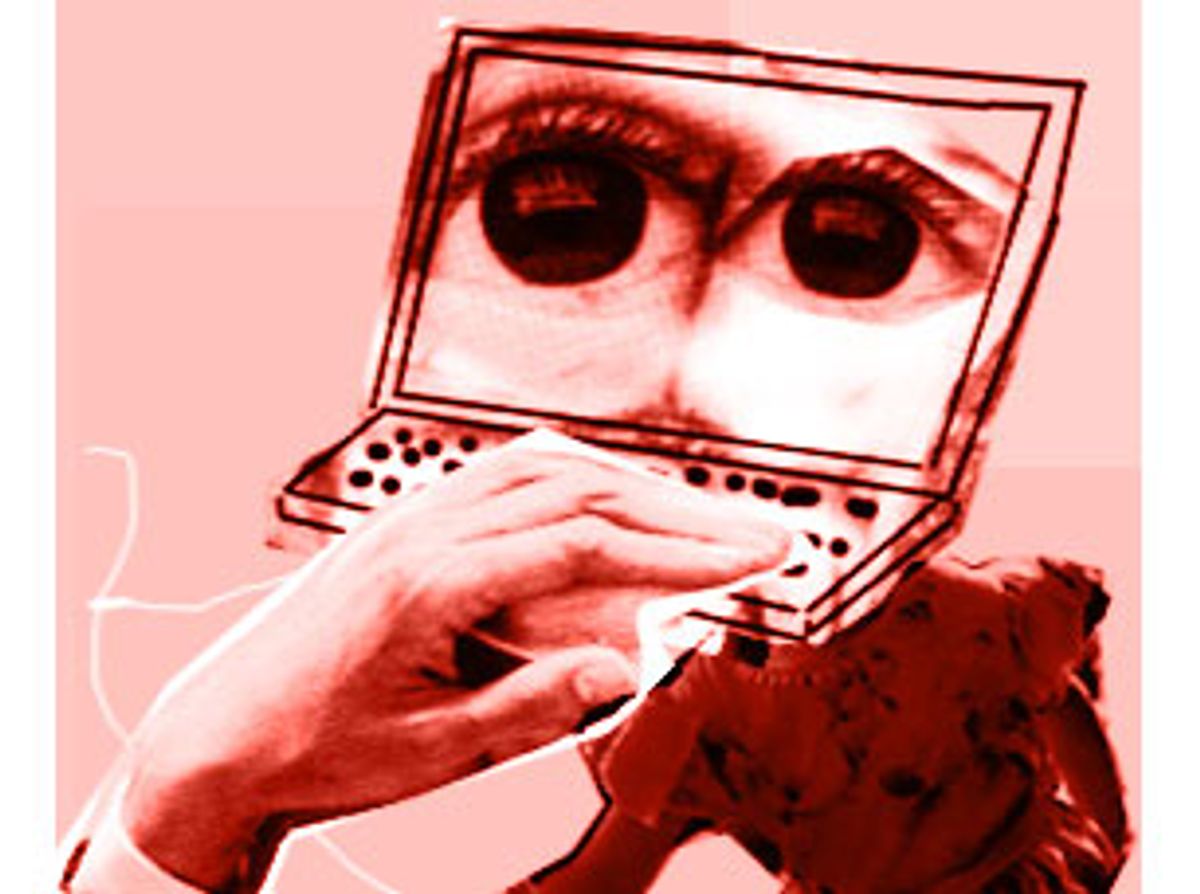 Things began going Naughton's way last Thursday when the jury split largely along gender lines on the charges that the former executive vice president of Disney's Go Network had crossed state lines (from Washington to California) and had used the Internet in an attempt to have sex with a 13-year-old girl. The kicker, of course, was that the "girl" Naughton met in a chat room called "dads&daughterssex" was an FBI agent trawling for pedophiles, and even the decoy he met on the Santa Monica pier Sept. 16 was a sheriff's deputy in pigtails.

Though an alternate juror I spoke with was convinced that Naughton, 34, went to the pier that night with every intention of having sex with a minor, most of the men on the jury were not so sure. Naughton had maintained that such chat rooms (where he spent a lot of his time online) were a source of fantasy for him, and he assumed that "krisLA," the FBI's fictional teenager, was a woman of legal age herself.

"For me, it seemed like a fantasy," 39-year-old Jorge Hernandez told the Los Angeles Times. "He didn't touch her." Indeed, the majority of the men who voted for acquittal (the six-man/six-woman panel reportedly split evenly on the state lines charge, with one man crossing over for conviction on the Internet charge) thought the feds had acted too soon, arresting Naughton before he had laid a hand on the decoy.

And then, in a ruling the next day, a federal appeals court ruled that the Federal Child Pornography Prevention Act is unconstitutional in that it outlaws images protected by the First Amendment. Specifically, the court was defending the right of individuals to possess images that appear to be child pornography -- when in fact they were digitally manipulated. ("No child was harmed in the making of this pornography!")

The rub in Naughton's case was that two of the pictures he had on his laptop were identified by a British law enforcement agent as being photos of actual children engaged in real sex. Naughton has denied knowledge of the pictures -- though Judge Edward Rafeedie's decision whether or not to release him on bail will probably rely more on his interpretation of the federal court's ruling. (Also at issue in light of the new ruling are the instructions Rafeedie gave to the jury.)

What seemed odd about Naughton's fantasy defense was the fact that he was not playing a role in the chat rooms ("dads&daughterssex" was one of several he frequented, including "girls&oldermen" and "girls&olderguys") -- at least not in the conventional sense. He sent "krisLA" links to stories about Patrick Naughton as well as photos of himself (including one of what he said was his erect penis) and bragged about his accomplishments and status in the Internet world. (Before working at Infoseek, which Disney bought and merged into the Go Network, Naughton had been an executive at Paul Allen's Starwave, and at Sun Microsystems he had been among the engineers who wrote the code for Java.) But that was part of the fantasy, it seems. "The role I was playing was a character of me," he told the jury. "If you ask my psychiatrist, I have a lot of self-image and ego problems. I was looking for approval."

As bizarre as this may seem on the surface, Naughton's logic makes perfect sense to one young woman who had an online relationship with him in the early '90s. (The woman, who contacted me after reading my last column on this case, wishes to remain anonymous though she established the veracity of her claims with me -- and was even interviewed by a private detective working for Naughton's defense team.) "That was why he played himself on the Net," she said of her encounters with him, "for approval. He never lied about who he was."

Though the U.S. Attorneys (who have until Jan. 5 to decide if they are going to retry Naughton on the first two charges) insist he was seeking something other than approval in Santa Monica that night, it is clear from the jury's reaction and the memories of this other online correspondent that his story can be seen in more than one light. Was Patrick Naughton a closet pedophile or an over-stressed executive engaging in some harmless sexual role-playing? And were the actions that led to his arrest those of a man about to put his fantasies into violent play or (in that shopworn liberal phrase) a desperate cry for help? The answers may lie where his story began: on the Internet.

A search on Yahoo for Patrick J. Naughton yields thousands of results. From the little Java applets he created while at Sun (moving fish in an aquarium was a popular one) to the Forbes ASAP profile he sent "krisLA" to Starwave press releases in which he was quoted after the ESPN SportsZone firewall was breached, his fingerprints are everywhere. You can see pictures of Naughton riding in a taxi in Aspen in 1998, talking on his cell phone, or read about the key role he played in the development of Java.

"I'm glad I'm at the top of the food chain," he said in a Forbes article ("Mr. Famous Comes Home") in 1998. "I came from a poor immigrant family. My father came from Ireland, and he basically reproduced Ireland in Rochester. We had ten acres of land with cows and ducks and pigs."

A large family and its peculiar pressures was something that Naughton and the online correspondent I spoke with had in common. "He comes from a large family (he's the youngest) of highly successful professionals," she wrote me in an e-mail. "I, too, come from a large family of successful people. The kind of attention we received at home as kids was like ... 'tell me what you accomplished' kind of thing. Approval is very important to people like us. It's NOT unusual that we seek approval in other ways."

Indeed, Naughton described his father to Forbes in fairly unforgiving terms. "My father has never been one to compliment anyone to their face," he said. "It reminds me of the time he signed my fourth-grade report card. I got straight A's entirely through Catholic school. Once, I got this report card and it had all these A's, but it had an A minus in religion or handwriting or something minor. My mother always signed the report card like a rubber stamp. When my father signed it, he made a few comments to the teacher. He said, 'I think Patrick can do better' -- which is just a classic line from dear old dad."

Naughton met the woman I spoke with through a BBS in the early '90s. Though separated geographically, they shared some passions in cyberspace. "Back then he wasn't as famous or as wealthy," she recalled, "but he was the most amazing person I had ever met on the Net. When most guys were asking about sex, Patrick just wanted to talk about family, ambitions, and love of Irish music and culture. I was significantly younger than he, so I was bedazzled by his fast-paced life."

They did chat about sexual fantasies, albeit somewhat cautiously. She was wary of commencing a non-cyber relationship, having been raped by someone else she met online, so she proceeded tentatively. (Naughton had his own reservations it seems, asking to speak to her on the phone on one occasion to make sure she was a woman.) She admired his success from a distance ("He was very proud online; he told me his salary was doubling every year") but any hopes either may have harbored for anything more came to an end when she sent him a photograph of herself. "He said I was too young for him," she recalls (something Naughton's attorneys must have been heartened to hear).

She didn't hear anything from him for two years until she learned of his arrest. After posting messages to and about him on another bulletin board, defending his reputation in the wake of the charges and his dismissal from Disney, she received an e-mail from him during the trial. In his message he thanked her for her support and offered a rather unusual prediction. "i think i have a lot of good to do with my time Left in this earth," Naughton wrote. "in fact, i have a lot of good ideas which would protect both the children we are here to care for, as well as protecting the first amendment rights of the adults who deserve them. if i am acquitted, i think i will dedicate a big block of time to solving these problems."

Such a line might seem self-serving, the sort of prayer one offers when the shit is about to hit the fan. And the temptation to make a pop-psych pastiche out of Patrick Naughton's character is almost irresistible: The remote and distant father; the up-from-nowhere success story with its timeless, Icarus-like denouement; the arrogance of a man who helped define the Internet and the lure of fantasy to someone stressed out and isolated in spite of all the "chatting." The feds could just as easily make a case for a predator-waiting-to-happen, a guy looking for younger women online who maybe just didn't like the looks of this one.

It is doubtful that the mystery of Patrick Naughton will be settled by what happens in court. The reaction of Disney (which canned him within hours of his arrest) is indicative of how the topic of "inappropriate" sexual behavior is dealt with: Next question, please. And while an older brother, James, was by his side throughout the trial, Patrick's wife was conspicuously absent.

There may finally be no right answer. Among the links that bear his name you will find "Patrick Naughton's Magnetic Poetry Applet," a Java version of the refrigerator-magnet poetry game. You can move the collected words yourself or click on "scramble" to produce something like

"I the fluffy puppy
you the friend
we love beautiful poetry
go on."

But scramble the words another time and you might get a message such as this:

"the friend and I go out
but not beautiful poetry
a puppy milk
enormous meat."

Like Naughton himself, the applet offers no answers, just more possible word combinations, each one decidedly open to interpretation.