'Tis the season to be pissed off

Too many bags and too few bins make frequent flyers cry foul. 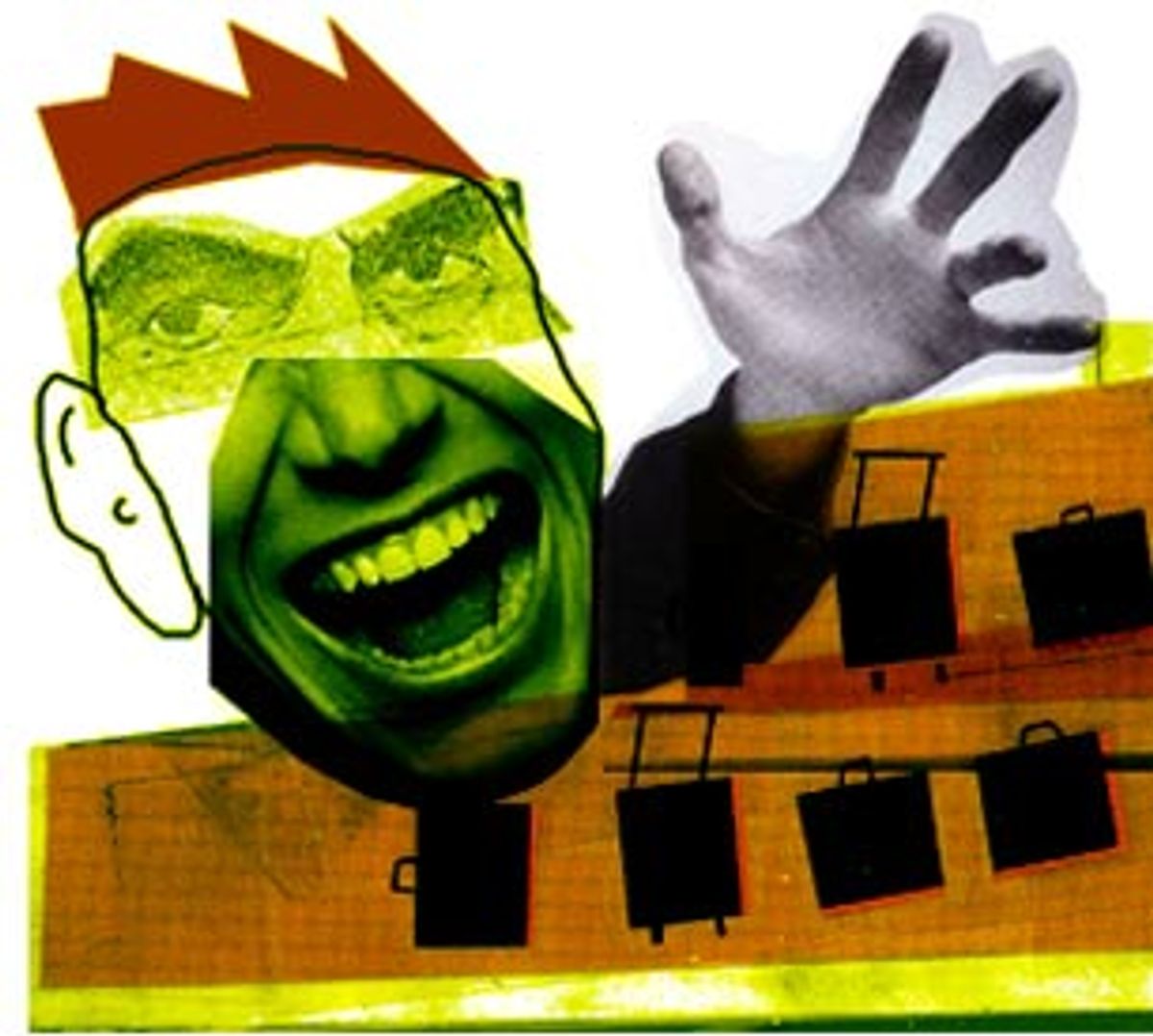 Just last week, on a flight from New York to Caracas, a disgruntled flyer threatened to file a lawsuit against me, my airline and a flight attendant colleague. The reason for his threat? Because the closets and overhead bins were crammed with enough coats, suitcases and Christmas packages to sink a new and improved Titanic, we were unable to accommodate his bulging carry-on bag.

According to the litigious passenger, his roll-aboard bag was filled with 12 bottles of expensive wine, which he had successfully carried aboard a twin-aisle 767 from Paris to New York. The 767s have endless space for carry-on bags. In addition to overhead bins that run along each side of the airplane cabin, a procession of larger, deeper bins swing down from both sides of the center ceiling section.

But the connecting flight from New York to Caracas was aboard a single-aisle 757, a nightmare for carry-on bag stowage. This long, narrow tube is configured with 166 coach seats -- three more than a 767, yet with almost half the cabin stowage space. The overhead bins are smaller. There are no bins that swing down from the center ceiling section. There is no overhead space for the six passengers sitting in the last row of coach (these bins are loaded with emergency equipment and a video player). And above the four people sitting in the first row of coach, in bulkhead seats 9A, B, D and E, there is no overhead bin at all. If bins had been installed here, they would block the emergency exit door.

As a result, the front-row coach passengers, like their binless comrades in the last row, are forced to stow their bags elsewhere.

Peeved at this lack of overhead bin space, the passenger in 9A plopped down in his seat after throwing his briefcase and carry-on bag to the floor. "You put me in a lousy seat," he screamed. "This is ridiculous! Why do I have to sit in such a shitty seat!"

Although the plane was completely full, I found space for his luggage. "This is ridiculous!" he repeated, as I prepared to walk up to the front and help the purser deal with our wine-toting passenger. "Why do I have to sit in a shitty seat!"

I looked down at the fuming passenger in 9A. I looked back at 166 faces crammed together like rows of matches ready to ignite. I looked back at the guy in 9A. "This is not ridiculous," I said. "Look around you, sir. There are 166 seats and 166 passengers. Somebody has to sit here. Is there any particular reason why it shouldn't be you? Besides, you've got more leg room than anybody else on this aircraft."

Before I could make it to the front, a first-class passenger asked for assistance. Apparently, someone had jammed a roll-aboard bag atop a layer of bags in the coat closet. In the process, the inconsiderate passenger had wedged the bag against a row of hanging suit jackets. The jackets were now wadded up against the wall, wrinkling like forgotten laundry.

I grabbed the bag, straightened out the row of jackets and rolled the bag to the front of the airplane. But before I could state the problem, a passenger who was in the process of arguing with the purser, turned and began shouting at me. "That's my bag! What are you doing with my bag?"

That's when the purser stepped in. "Sir," she said, "I told you there was no room on the aircraft for your bag. I'm sorry. We're going to have to check it."

"But I'm a well-traveled member of your frequent flyer program. Don't I get some consideration?"

"Yes, sir. You do," said the purser. "We made an announcement inviting high-ranking members of our frequent flyer program to board early. Why didn't you take advantage of our offer?"

"Let me check the overhead bins one last time," I said. The gate agent, who had been standing impatiently at the door, looked at her watch and gave me a dirty look. Still, I personally double-checked every last overhead bin. I asked several passengers for permission to move their bag from one bin to another in a futile attempt to make space for the bulging bag of wine.

Following FAA guidelines, we had lined the closet floors with as many bags as could be accommodated. No room there. We made repeated announcements, asking passengers to stow smaller items under the seat in front of them. Though many complied, there still was not enough space in the overhead bins.

Because departure time had come and gone during our attempt to accommodate the bag, the gate agent began to fidget and sweat. She bore the determined grimace of a woman making her last push during childbirth. "It's time to go," she said, tapping on her watch incessantly.

Gate agents are neurotic about on-time departures, and rightfully so. When a plane departs late, the agent is brought before a group of supervisors and forced to make a detailed explanation. Too many "preventable" late departures and they're road kill on the airline industry highway.

"Sir, this plane has to leave right now," the agent said sternly. "We're going to have to check your bag. I'm sorry. Your only alternative is the next flight. We can guarantee you a seat, and make sure you're one of the first on board."

"I wanna get on this flight!" the passenger demanded.

"That's fine," said the agent. "But we're going to have to check your bag." This is when we were all threatened with a lawsuit.

The passenger acquiesced, the bag was checked and along with nearly 200 miserable passengers and crew, the hopeful wine lover flew with us to Caracas. After the passengers deplaned four hours later, the crew piled into the crew van that would take us to our layover hotel. But the purser was not yet with us. We waited in front of the airport terminal while she made a company-mandated call to New York.

When she finally boarded the crew van, she apologized for making us wait. There was a reason for her extended delay, we soon found out. When she walked through the customs area, the wine-toting passenger had just claimed his bag. When he opened it, nearly every bottle of wine was broken. His clothes had turned pink, soaked through and through with expensive merlot.

Angry beyond comprehension, the man began flinging shards of glass to the floor, oblivious to the hordes of people milling around him. Suddenly, he spotted the purser. According to her, the man rushed up to her, screaming about a lawsuit and demanding her name for the third time that day.

Flight attendants hate these carry-on-bag holiday confrontations as much as passengers. Unfortunately, many problems can't be avoided. My advice is to show up for your flight early, get on the airplane as soon as possible and never carry a bag packed with 12 clinking bottles of expensive red wine. Chances are they're going to break, even if your patience doesn't.