"I May Not Get There With You: The True Martin Luther King, Jr." by Michael Eric Dyson

What would the civil rights leader think if he were alive today? 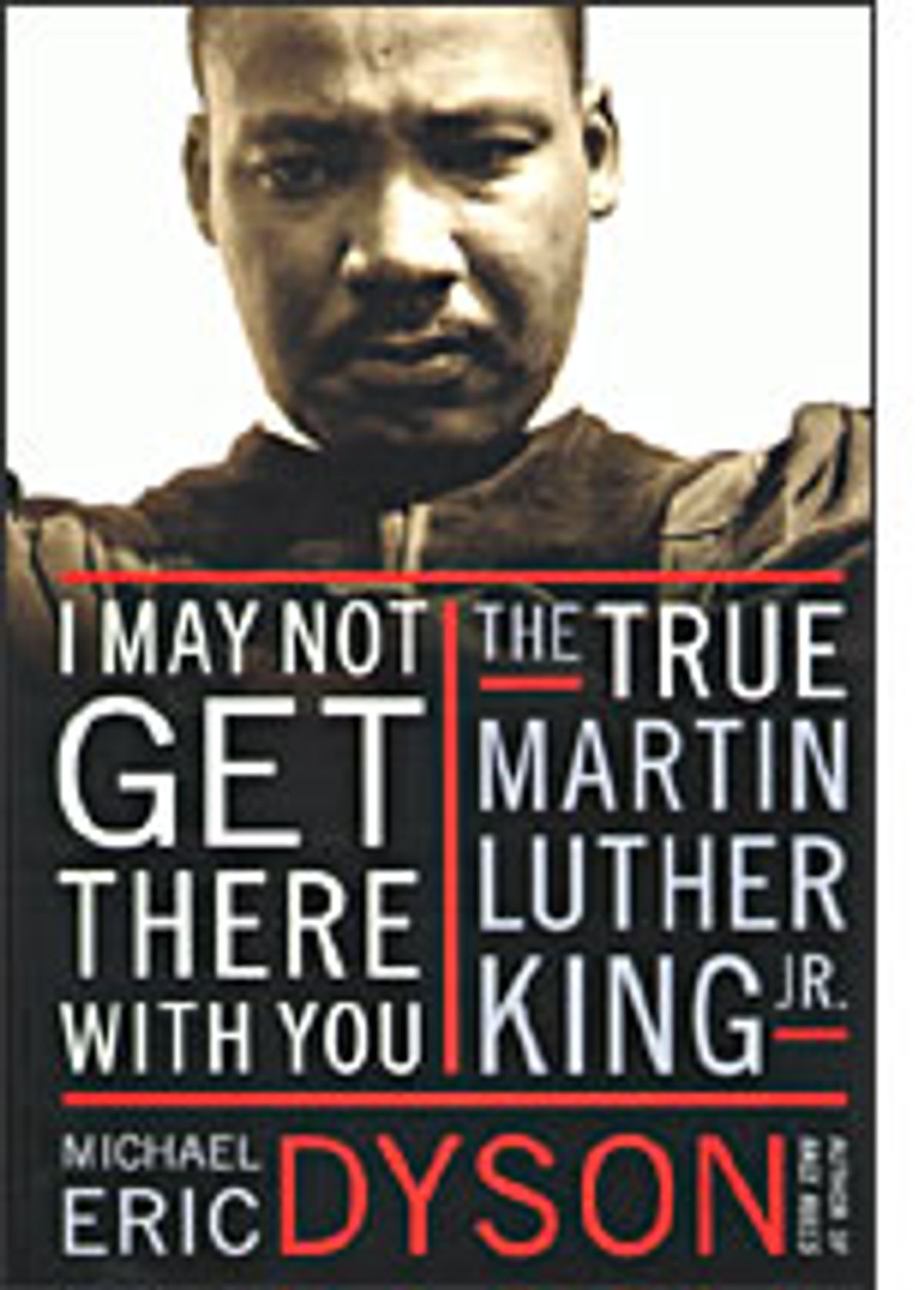 If Michael Eric Dyson had his way, Americans would put away the most famous speech Martin Luther King Jr. ever delivered and leave it there for 10 years. "I have a dream," King proclaimed in 1963, "my four little children will one day live in a nation where they will not be judged by the color of their skin but by the content of their character." Those words, interpreted then as a call to end discrimination against black Americans, have been more prominent lately in the campaign against affirmative action. And so the moratorium idea is convenient for Dyson's own political purposes. The Columbia professor and Baptist preacher supports race-conscious remedies to the hardships black people face, and in laying aside "I Have a Dream" he would deprive his foes of the best sound bite they've got.

Dyson is right about one thing: Few Americans these days know much more about King's thinking than what they remember of that speech. In Dyson's view, King has been transformed into a "safe Negro," a romantic dreamer who doesn't make white people uncomfortable. So in "I May Not Get There With You," he sets out to describe a King far more radical than the one trotted out for mainstream consumption on the third Monday of every January. "We must rebel," he writes, "against the varieties of amnesia that compete to reduce King to an icon for the status quo or a puppet of civil and social order ... King as he truly was is enough for us now, perhaps even too much -- a fact that drives us to sanitize his image with soapy tales of how he wanted us to like each other very much."

For most of his adult life, King did try to appeal to white people's consciences and to basic American ideals. That strategy worked brilliantly when he and his followers braved attack dogs, fire hoses and Southern sheriffs who were benighted to the point of caricature. But King's views changed in the mid-1960s, when he took his crusade against racism to Chicago. To hear Dyson tell it, the civil rights leader was bewildered by what he found: intense hostility among whites, demoralization among blacks and indifference all around to the "huge morality plays" like the ones he staged in the South.

Afterward, King showed much more reluctance to stake black people's future on white goodwill. Rather than demanding reforms in existing institutions, he talked about "restructuring the whole of society." By 1968, he was questioning whether black Americans could rightly celebrate the Bicentennial. He talked, at least privately, about the need for a democratic form of socialism. While his whole career reflected a desire for what Dyson calls "substantive, not just procedural, justice," that theme became more pronounced in the last three years of his life.

Painting a truer picture of that life takes more than just rereading the speeches, though, and Dyson feels obligated to address King's less honorable behavior. Critics have accused King of plagiarizing much of his academic writing, cheating on his wife and succumbing to sexism. Dyson concludes that King is guilty as charged; he thinks, though, that the man's achievements outweigh his sins.

That's a perfectly sensible judgment, but Dyson can't leave well enough alone. He tries to place King's plagiarism within a supposed black tradition of borrowing and expanding upon other people's ideas -- the same tradition, he suggests, that led to sampling on hip-hop records. He also hypothesizes that "King's plagiarism at school is perhaps a sad symptom of his response to the racial times in which he matured." Dyson tries to make a larger point out of King's infidelity as well, declaring that his "relationship with Coretta symbolizes the difficulty faced by black leaders who attempted to forge a healthy life with their loved ones while the government aimed its huge resources at destroying their families, a sure metaphor for how the state has often abandoned or abused the black family with cruel social policies." It's awfully presumptuous to speculate on what lay inside a long-dead person's heart. And it's intellectually sloppy to extrapolate a whole critique of society from it.

Unlike critics who bemoan the shift in King's tone from major key to minor, Dyson wants to revive and extend the work of the civil rights leader's later years. Yet he blurs the difference between his own views and what King might have thought if he were still alive now. When Dyson urges the black church to work for class solidarity, stronger labor unions and other goals familiar to readers of the Nation, he describes it all as what "King might say." When Dyson disagrees with King's opinions -- e.g., King "took too readily to the language of pathology to describe black ghetto families" -- he dismisses those opinions as "serious mistakes." That's too bad. Dyson's passion is evident, his writing is powerful and he's right to fret about people who use King to suit their own purposes. If only the writer could practice what he preaches.