We test three new digital video cameras in an homage to film noir. 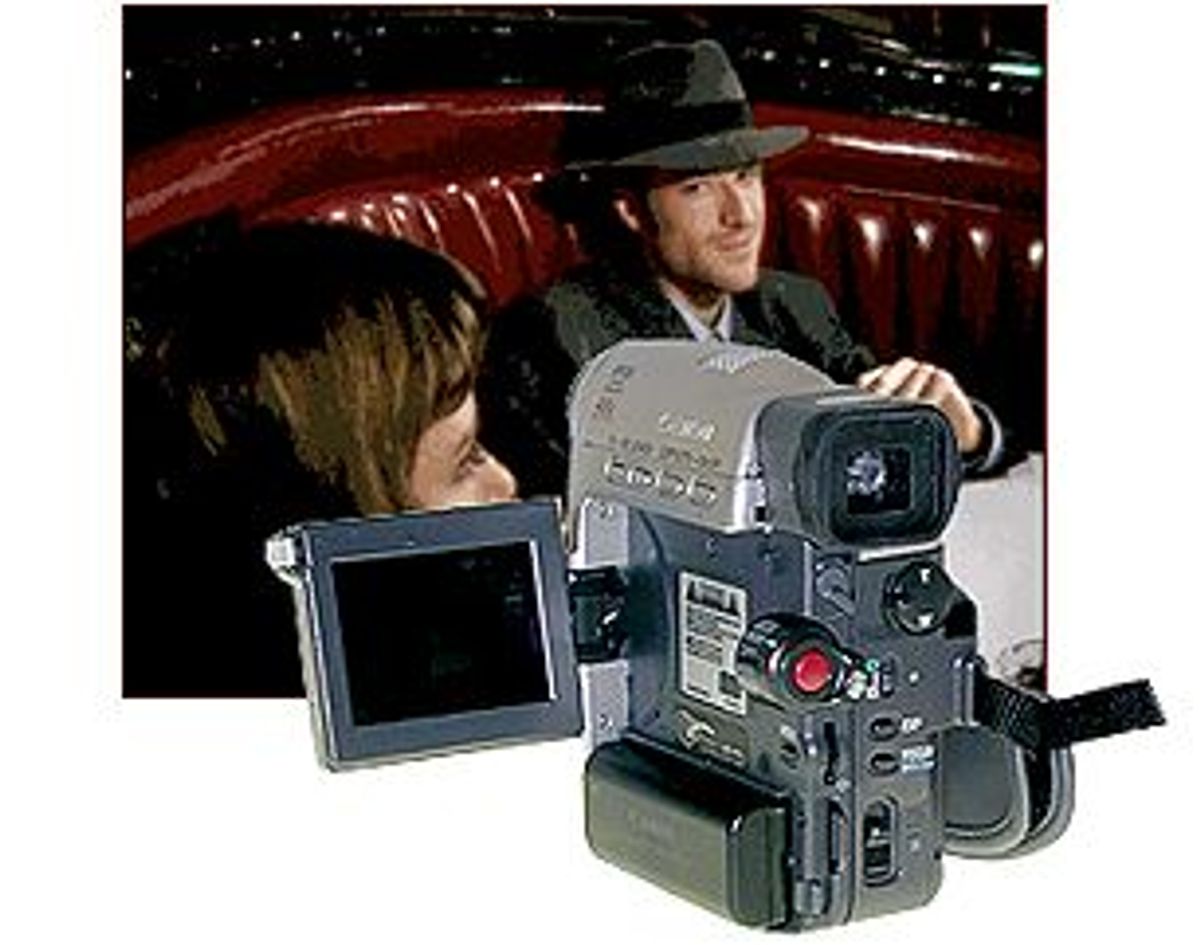 It's a great time to be a rookie filmmaker. In the 1950s and '60s, when 16 mm film stock was cheap, you could pick up a Bolex camera and shoot films purely for the love of the art. Nowadays, to shoot three minutes of 16 mm film, you would need about $1,000. Believe me, the artistic passion is subdued a bit when you have to choose between three minutes of film or a month's rent. But, thanks to digital video, amateurs and poor film students like me can entertain the idea of filmmaking -- and not break the bank.

Digital video looks as crisp as any TV show; it has twice the resolution of VHS or Hi-8 and it captures great color and detail, so your killer footage of the Grand Canyon is no longer reduced to the hue of warmed-over meatloaf. You pay for the quality -- camera prices haven't dropped much below $1,000 -- but the zillionth copy of your video looks just as good as the first and these cameras record CD-quality sound. Besides, you also can take digital photos, so you really are getting two cameras in one.

Great. Once you decide on digital video, how do you choose a camera? I decided to look at a handful: Sony's DCR-TRV900 has gotten a lot of consumer press and looked good, even though it is the priciest at $2,500. The Canon Elura is an easy traveling companion with a comfortable price of $1,100. And the Panasonic PV-DV910, with its sporty retro design, reminded me of my aunt's old Super 8, and sells for $1,000. All three have a FireWire port -- a really fast way of exchanging data between digital devices -- which I considered a requirement. After all, I was looking for a long-term investment, not a quickly outdated tech toy.

Film noir is perfect for testing cameras under dramatic lighting situations with lots of shadows. So I began my research at Bruno's, a slick San Francisco joint that can cajole even a gin-hater to order a martini. I met the crew early one Saturday morning. Our mission: Get three good takes, one with each camera, and wrap production by 4 p.m., before the real martinis started flowing.

I called the film noir-inspired project "Goose, Baby" and crammed as much character development and as many plot twists as I could into a minute. I also made sure to include lots of red and white: Red tends to bleed into other colors, while white tends to glare. But shooting film noir in the 1940s must have been easier because more people smoked then; my actors weren't used to it and hacked through a couple of takes. I even had to teach them how to light a cigarette.

The next day I started looking over what I had and picking out the best takes. I plugged the camera into my VCR and watched my film noir on TV. To move the clips onto my computer, I hooked the camera up via a cable. I've got a Windows NT system with 256 megabytes of RAM and a 9-gigabyte hard drive. To do this kind of work you need at least 128 megabytes of RAM or you are going to be very unhappy. I had to install a separate video capture card, which transfers the video from the camera to the computer. (You won't need one if you computer has a built-in FireWire port, like certain iMacs and the rare PC.)

Then it was time to start editing. This is the fun part, where you get to cut all the dull bits out and add cool special effects like a whirling newspaper that says "Gangster Murdered!" You can get a competent editing program, such as Ulead VideoStudio or MGI's VideoWave, for around $100. The software lets you pick out the footage you want to use, mix and match your clips and add special effects and titles for a smashing final product.

I was prepared to give my heart to the Sony. It was the only 3-CCD (Charged Coupled Device) camera I looked at. (CCDs account for the $1,000 gap between similar cameras. They are the digital eyeballs with light-sensitive pixels that capture the picture. Three-CCD cameras have one for each primary color: red, green, and blue. The single-chip cameras register all three colors on one chip. So you get more accurate colors with three CCDs.)

Of the three, the Sony is hands-down the easiest to pick up and just start shooting. The buttons are obvious and in convenient places and I made it nearly all the way through the testing without having to consult the manual. But on the set, I ran into an annoying and non-adjustable sleep feature: The camera goes to sleep without any warning and you have to turn it on again (and again and again). The Canon, on the other hand, gives you ample warning with a series of gentle beeps.

Overall, the Sony renders color better than the other cameras -- but not $1,500 better. Sony also has single-CCD cameras and a line of Digital 8 cameras, which are considerably cheaper but also have less sophisticated features than the TRV900.

The Panasonic's PV-DV910 caught my eye right away. With a detachable light on top, it reminded me of a submarine. It has lots of bells and whistles. However, some of these extras, like a 300x digital zoom, turned out to be more gimmicky than useful. If you try, for example, to zoom in on a distant building, you get a blown-up view of a few windows, say -- but not a magnification of the whole thing. The reds and greens had an unnatural glare in our test shoot. The camera also doesn't like shadows very much; my film was marred by light glaring off a leather booth -- something which didn't happen with the Canon and Sony.

My mild dislike of the Panasonic turned into outright disdain, though, when I found out that the timecode resets itself every time you turn the camera off and back on -- making it difficult to keep track of how much tape you have left.

Because of Sony's reputation, I had been biased in favor of the TRV900, but the Canon Elura was my surprise favorite. It's amazing that Canon managed to fit so many incredible features into such a tiny package. At five inches high and four inches wide, it slips into a purse or backpack easily and still matches the Sony feature for feature with optical zoom and optical image stabilization. It's small enough that I could hold it steady enough to shoot with one hand, and I have small hands. When I took the cameras out on the street, the Elura was completely unnoticed by passersby; and in heavy crowd situations I had absolute control over it.

Both the Canon and the Sony take still photos with progressive scan -- which means that the cameras read all the pixels of the image with a single pass, for cleaner edges and sharper photos. The Canon also did an excellent job with shadows, reproducing the way our set actually looked, including a dark backdrop. The Elura has a 12x optical zoom and a 48x digital zoom, and optical image stabilization for a steady shot. (When you hear optical, think optimal: an optical zoom magnifies the image, while a digital zoom simply blows it up for a jagged, pixelated image.)

For a single-CCD camera, the Canon Elura performs extraordinarily well. So well, in fact, that I wouldn't be able to justify spending an additional $1,000 for Sony's 3-CCD model. The Elura's colors are bright and the edges are sharp. The red on Harry's tie did bleed a little into the gray suit, but the same happened with the Sony and the Panasonic.

Before doing this review, I had my heart set on buying the Sony TRV900. Now I'm definitely going for the more-bang-for-your-buck Canon Elura. By the end of the shoot, the Elura was starting to feel like an extension of my hand. Spend some time finding the camera that fits you like a glove, and start shooting -- and editing. It's a lot of fun.

Heather Mund is finishing up her film degree at San Francisco State University and is an associate producer of multimedia at Salon.