From "Smells Like Teen Spirit" to "Rebel Girl," 10 songs that changed my decade. 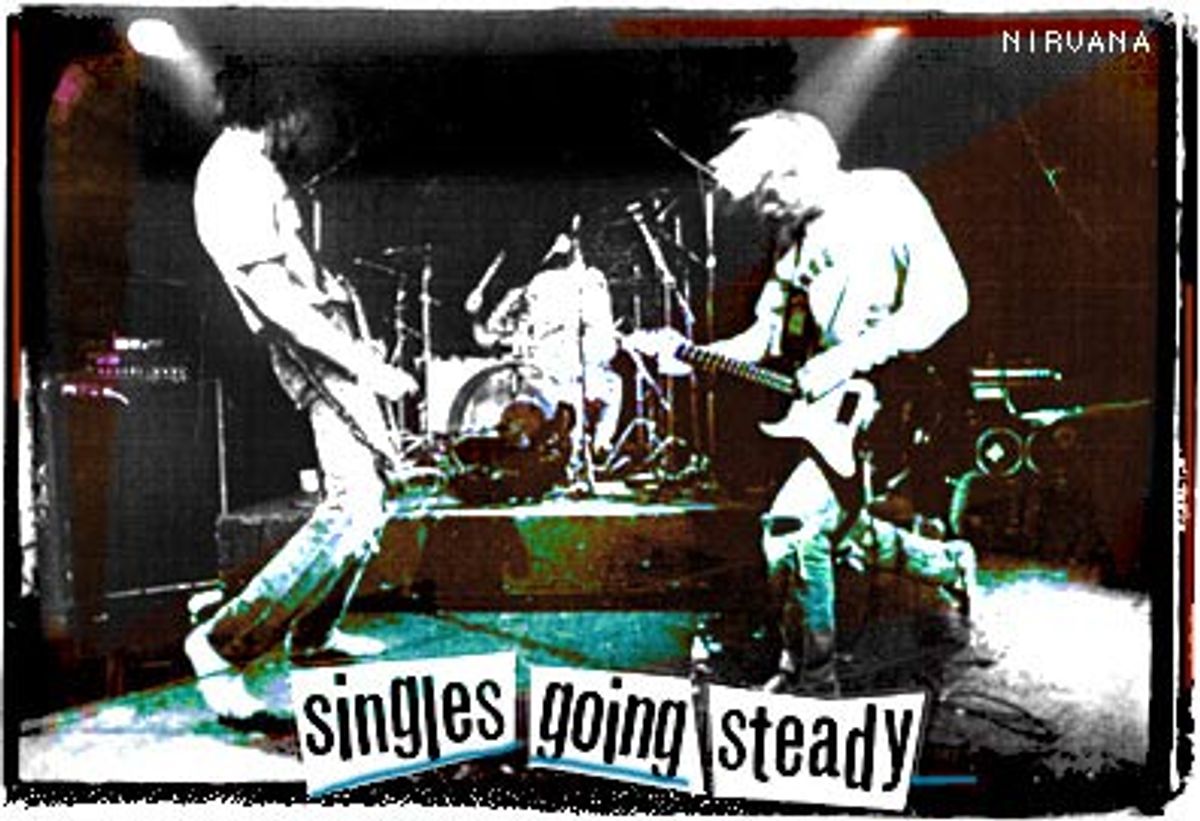 The heyday of Top 40 radio could be as frustrating as it was
exhilarating, requiring you to listen through songs you hated to hear
ones you loved. Today, pop radio is so rigorously formatted to carefully
selected audiences that you can listen for hours and never hear any
music outside of your demographic. And when you can throw on a new CD or
download music, the possibility of exposure to something new dwindles
even more. MTV has never been a haven for new music trying to find an
audience, but watching the station, you probably have a better chance of
encountering a mix of styles and songs than you would on any radio
station. A hip-hop video will follow a metal video will follow a Latin
pop video will follow a pop video. Granted, they could all be junk, but
at least it's a mix.

1. "Smells Like Teen Spirit," Nirvana
Every seminal moment in
rock 'n' roll contains the possibility of its opposite. The enormous
affirmations of Elvis and the Beatles contained implicit refusals of
deadening routine, and the resounding negations of the punks allowed for
the possibility of something beyond boredom. Like punk, Nirvana was a no
that implied a yes, even if that no, in the form of Kurt Cobain's
voice-shredding mantra "a denial," sounded as if it would brook no
argument. I first came across it in a hotel room in Syracuse on an
all-request video station, and could scarcely believe what I was seeing
-- a pep rally in hell that turns into an anarchist's ball. But you need
never have seen that great video to hear a sound growing out of the
rubbery, underwater guitar chords that open the song that could reduce
buildings, and everything that surrounded it on the charts, to rubble.

2. "Independence Day," Martina McBride
"Smells Like Teen
Spirit" is the song that defines the decade, but this mainstream country
hit is the most subversive of the decade's singles. Seven years later,
its contradictions are nowhere close to being resolved. And the way
Martina McBride, the finest mainstream country singer of the decade,
heads into those mysteries is still thrilling. Songwriter Gretchen
Peters based it on the 1983 film of the same name (written by
novelist Alice Hoffman), and the material could have been a classic
country weeper. It's sung by a woman remembering the Fourth of July when
she was eight. While she's at the town fair, her mother sets fire to the
house, killing herself and her abusive drunk of a husband. The little
girl returns to find herself homeless and orphaned: "They just put out
the flames, and took down some names and sent me to the county home."

Nothing here is that tidy. Years later, time hasn't begun to heal any of
the wounds. Listen to McBride's voice and you hear bitterness -- at her
old man's brutality, at the death of her mother, at the wagging tongues
of her small town finding more shame in a woman who stays than the man
who beats her. But when McBride shifts into the chorus what you hear is
a kind of glory. "Let freedom ring," she begins, echoing Martin Luther
King's "I Have a Dream" speech, except this is no celebration of
nonviolence. In the next lines -- "roll the stone away/let the guilty
pay" -- she's confusing New Testament forgiveness with Old Testament
retribution. "I ain't saying it's right or it's wrong," McBride sings in
the song's windup and if that refusal to apologize or judge her mother
is by itself startling, it's no preparation for the shock that follows
with the sneer McBride puts into the lines "Talk about your
revolution/It's Independence Day."

In that moment McBride focuses the song's juxtaposition of independence
as national institution and banal abstraction with independence in
action. McBride may not be aware how far she went; surely the country
radio stations that made this a hit weren't. But as surely as the punks
did. "Independence Day" calls into question the nature of institutions
and Values taken for granted. If McBride has a spiritual ancestor in
this song, it's a figure from the civil rights movement, SNCC's Jim
Forman, who said, "If we can't sit at the table, let's kick the
motherfuckin' legs off!"

3. "Miss World," Hole
Maybe 15 years from now this will
sound like a great punk anthem with a great punk catch phrase: "I'll make
my bed/I'll lie in it/I'll make my bed/I'll die in it." To anyone who
lived through that awful
spring of 1994, they will always sound like the only words that
didn't seem to be spoken in a foreign language.

4. "Mind Playing Tricks on Me," The Geto Boys
Despite some
records that have thrilled me to the core, I've listened to hip-hop as
outsider more than adherent. Partly it's the lack of distance I hear in
the celebration of guns, money and hos, a hard materialism that's (to
me) depressing in a way that Chuck Berry's celebrations of drive-ins and
coffee-colored Cadillacs and Hooverators crammed with TV dinners and
ginger ale could never be. This horrifying song steps back from gangsta
fantasies and puts us -- inescapably -- into the skin of a man trying to
live the thug life. He's given up everything in pursuit of it -- his
woman, his son and now, it seems, his mind.

This character had an on-screen equivalent, Ice Cube in "Boyz N the
Hood," flattening all human feeling from his expressive face, steeling
himself to die, an old, tired man in his early 20s. The only comfort
the song offered was the scratchy sample from an old soul record, and
yet as a reminder of a vanished warmth it was no comfort at all. But
treating both singer and audience as subjects rather than objects, the
song approached the hard truths of great early '70s soul, the heyday of
Curtis Mayfield and the Chi-Lites, the O'Jays of "Back Stabbers" and the
Temptations of "Papa Was a Rolling Stone." No hip-hop record I've heard
has touched it.

5. "Common People," Pulp
The glorious return of class hatred.
In the song, at a British art school -- launching pads for countless
dandy-aesthete-socialists who, like Pulp frontman
Jarvis Cocker, have prowled through British rock -- a working-class
young man meets a rich foreign girl who wants to "be like common
people." What follows is funny, incisive, cruel and, finally, something
akin to the revenge taken by the sideshow freaks on the heartless blond
wife in Tod Browning's classic horror film "Freaks." Cocker sings as if
he has the power to make her wish come true and to make it her regret it
for the rest of her life.

6. "Tom Courtenay," Yo La Tengo
Appearing at about the same
time as the release of the Beatles' "Anthology" CDs and the massive
video retrospective, this song by Hoboken trio Yo La Tengo indirectly
addressed (as the brilliant and heartbreaking accompanying video did
directly) the way people turn to the past to recapture their lost youth.
With the first line invoking Julie
Christie, the song recalls the way some of us obsessed over
everything British because it all seemed the epitome of the cool lives
we wanted to lead. Ira Kaplan's dreamy, introverted voice caresses every
familiar name as if it were a talisman, a fetish object. A memory of
seeing "Help!" -- "I spent so much time dreamin' 'bout Eleanor Bron/In
my room with the curtains drawn/Seein' her in the arms of Paul/Sayin' 'I
can say no more'" -- couldn't be more poignant if he were singing about
people he actually knew.

But in a way he is. Taking for granted the way our idols become part of
our lives, the song collapses the distance between fantasy and reality,
between memory and the present only to have both fantasy and memory recede.
The song trails out on the increasingly hazy line "thinkin' 'bout the
Beatles" and a "ba-ba-ba" refrain repeated as if the perfect pop hook
had become both Fountain of Youth and the Grail.

7. "There She Goes," The La's
This song from a British group
that appeared out of nowhere and promptly returned there after one album
might be what Yo La Tengo is reaching for in "Tom Courtenay." Possibly
the most beatific pop song since "She Loves You" (though not in the same
league -- what is?) and surely the simplest. The chiming guitars and
ethereal harmonies that open are as much a signal from an earthly
paradise as is the image of the pealing church bells in "Bredon Hill"
by the British poet A.E. Housman. The protagonist of Housman's poem is
exiled from that paradise. Whoever heard "There She Goes" was luckier.
The perfect pop hook becomes both Fountain of Youth and the Grail.

8. "Are You That Somebody?," Aaliyah
I found no better proof
of the "don't know, don't care" divisions in the rock audience than the
night (while this song was ruling the radio and MTV) I went to see a
show by the Spinanes, who covered it without anyone in the white
indie-rock crowd showing any sign of recognition. With a stumbling,
stuttering beat and the strangest hook of the decade (a baby's sampled
gurgle), this Timbaland-produced number was a highlight in a decade of
strong R&B singles. Aaliyah's cool is the spiciest imaginable, like
Tabasco sauce fresh out of the fridge.

9. "Rebel Girl"/"New Radio," Bikini Kill
Riot Grrrl at its
fiercest and most joyous. In "New Radio" -- a lesbian rrrewrite of Eddie
Cochran's "C'mon Everybody"-- the party thrown while mom and dad are
away has just two attendees, and Cochran's great, carefree rejection of
consequences, "Who cares?" is replaced by the declaration, "Let's wipe
our cum on my parents' bed/Come on!" "Rebel Girl" is a lesbian rrrewrite
of "Leader of the Pack," only more egalitarian: "I think I wanna take
you home/I wanna try on yr clothes." The decade's best version of rock
'n' roll as huge, bracing, dumb, soul-stirring noise. When Kathleen
Hanna sings, "When she talks, I hear the revolution," she could have
been talking about this single.

10. "Some Jingle Jangle Morning (When I'm Straight)," Mary Lou
Lord
The first time I ever heard Mary Lou Lord playing in the
Boston subways she struck me as the perfect girl for those sensitive
guys still dreaming of finding a hippie-folkie chick of their own. Then
she sang an aching-voiced cover of Merle Haggard's "White Line Fever"
and I wiped the smirk off my face. On this song, rerecorded for her
major label debut with a guitar solo by Roger McGuinn but cited here in
the Kill Rock Stars vinyl 45 original, she refers to Nirvana's "About a
Girl," Dylan's "Mr. Tambourine Man" and Jackson Browne's "These Days,"
as well as to her own indiscreet liaison with Kurt Cobain. As usual, the
weariness in Lord's breathy scratch of a voice overcomes any potential
preciousness in the delivery. This is a road song sung by someone too
tired to move, and an elegy for a community that was dissolving before
anyone knew it, a ragged wreath commemorating the brief moment in this
fading decade when the alterna-indie scene ruled rock.