It took a group of real men to satisfy my craving for a home-cooked meal. 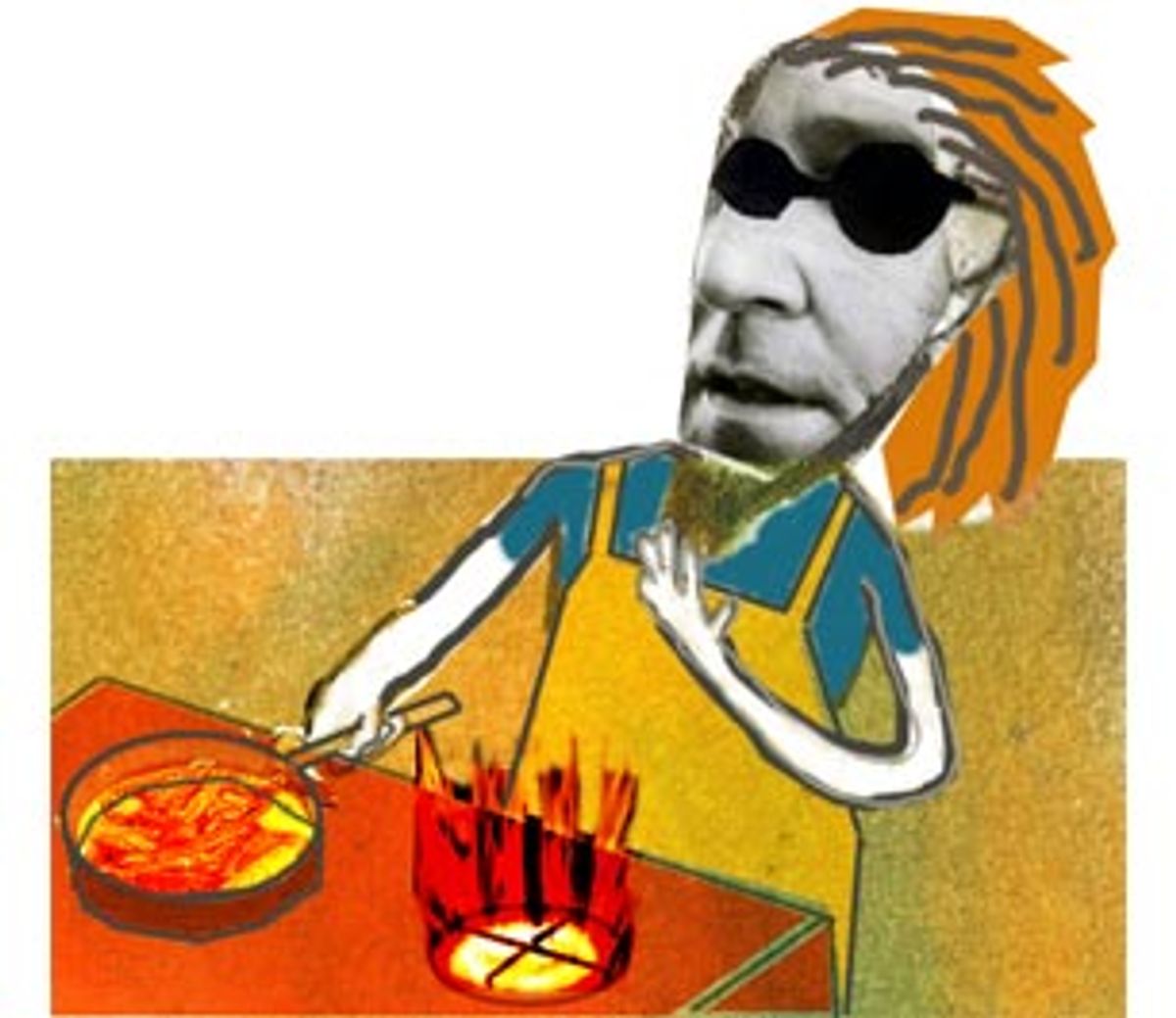 I dont want to offend my father, whose hefty plates of barbecued ribs fed
me on many a summer evening. But it was a long time before I understood that
men could cook.

Our mothers, after all, were the ones to whom my childhood friends and I looked for sustenance. In a divorced family, like mine, a mother was often the only parent available. But even in two-parent families, meals -- whether exotic or mundane -- were nearly always seen as a womans task.

After college, when my girlfriends and I were finally in charge of feeding ourselves, we were surprised to find that we were uninterested -- even inept -- in the kitchen. As modern, educated women setting up camp in cities far from home, we were too busy with our newfound freedoms and demands to find time to attend to domestic details.

In Washington, practical Julie lived on bagels and soda and stayed awake all night reading legal documents. In Dallas, stylish Nita forked up pasta salad between
grant-writing deadlines at the museum. And in San Francisco, I,

bred-in-the-bone bohemian, worked at the wine bar in an Italian trattoria
and wrote short stories without endings, dining, when my boss allowed it,
on bowls of pasta puttanesca.

Even my new roommate was not immune to this collective stovetop ineptitude.
A long-limbed fund-raiser for the arts, Carrie would use the superfueled
left flame on our ancient gas range to fire up a can of soup in less than a minute. When she got more inventive than that she was dangerous. She once left a skillet on high with a wooden spoon beside it while she dashed to the corner market for a missing ingredient, with predictably incendiary results.

I think we women had all assumed that we could slip easily into an apron whenever we felt like it, that good cooking would come to us naturally. Perhaps we thought those dinners our mothers had served had come to them naturally, too -- that they carried a gene for domestic talent that we had all, surely, inherited.

I cannot speak for my friends, but I loved food, and I missed it. I missed the
elegant dash of my graduate student mothers hurried dinners. I liked to
stand in the doorway of a bakery and inhale, to rub rosemary between my
fingers, or to sip from a tasting spoon. But I didnt know how to translate
my appreciation of food into a meal.

When I finally decided to make something, Id turn to a fancy, literary cookbook full of autobiographical meanderings and recipes for smoked lobster or cassoulet. After an afternoon spent preparing one of these impossible dishes, I would throw it away and go out for pizza. My food didnt ignite, but it didnt quite work, either.

After a couple of years some of us got restless again. Nita moved to New
York and, seduced by the gourmet takeout at that citys famous grocery,
named her new cats Dean and Deluca. Carrie found another job and was sent to
Paris. I moved back home -- to the cheaper, more comfortable city of Seattle. Julie, tired of working all night, was thinking about following me.

It was on a night in that old friend of a city, while I was fed up with my meager
cooking skills, that I learned how we modern girls might feed ourselves.

I had tried to make an elaborate squash soup that was -- even after an hour of
chopping and seasoning and pureeing -- about as appealing as Elmers glue. I stepped outside my door and admired the peaks of the Olympic Mountains, sharp and white as canines, holding their own against the spectacle of the sunset. Then I
walked to the local grocery, thinking of how much time Id spent on this
project, thinking I should give up, once and for all, on trying to make anything
in the kitchen. Thinking I was desperately hungry.

In the market parking lot, a guy I sort of knew waved me over. He carried a big bag of groceries and was with his two roommates. They were all in their mid-20s with shoulder-length hair. They said they were headed home to cook a big dinner.

"Hey," asked the acquaintance, "are you hungry?"

I went home to get my new roommate -- my old friend Julie. She had moved west to be outdoors and was living, I believe, on energy bars and fresh mountain
air. We walked the few blocks to the address the guys had given me. It was late summer and everyone was out on their porches, drinking in the last sips of light. We came upon a driveway littered with motorcycles and climbed the steps of a
white rental house. We stood on the sagging porch and wondered whether
pizza or burritos awaited us beyond the threshold.

The door opened to a man with a knife and the sweet scent of sautiing onions.

Our host took us directly to the kitchen and introduced us to his friends.
They turned out to be a group of cooks and waiters, plying their trade on their day off. We watched as they performed a sort of modern dance upon a stage set with vegetables and electric appliances. One man squinted at a recipe, then sprinkled a saucepan with an unmeasured squirt of olive oil, a palm full of flour, a flutter of pepper flakes. He poured milk from the carton, unmeasured. Another shook and scraped a skillet vigorously, tasted its contents with his finger, then stroked a hand
over his goatee.

They waved to us with spatulas and forks and flour-dusted hands, then sent us to the living room to relax with the pet boa, Zeppelin.

The dishes we ate that night -- most memorably an apple cider soup with
cheddar -- were astonishingly good. I wondered what, if anything, the fact
that these cooks were men had to do with their culinary success. Perhaps, I
think now, we daughters were too busy trying to show how far we could go. We would have thought that learning the rules of the kitchen meant giving in. These men, whose fathers probably hadnt known a saucepan from a sauce bernaise, could think of the kitchen not as a place to fulfill the expectations of their past, but as a
new frontier, a place to explore and to play.

Whatever the reasons for their success, Julie and I feasted on the late-summer offerings of these capable men -- the fresh bread and soup, the greens, the pie -- as if we had not eaten a real dinner for years.

And perhaps we hadn't.

Seattle essayist Maria Dolan wrote "Learning to Love the Abyss" for Salon Wanderlust in December 1997. She is at work on a book about urban nature.