What happens when a fleet of millionaires descends on the innocent shores of Antarctica to celebrate the millennium? 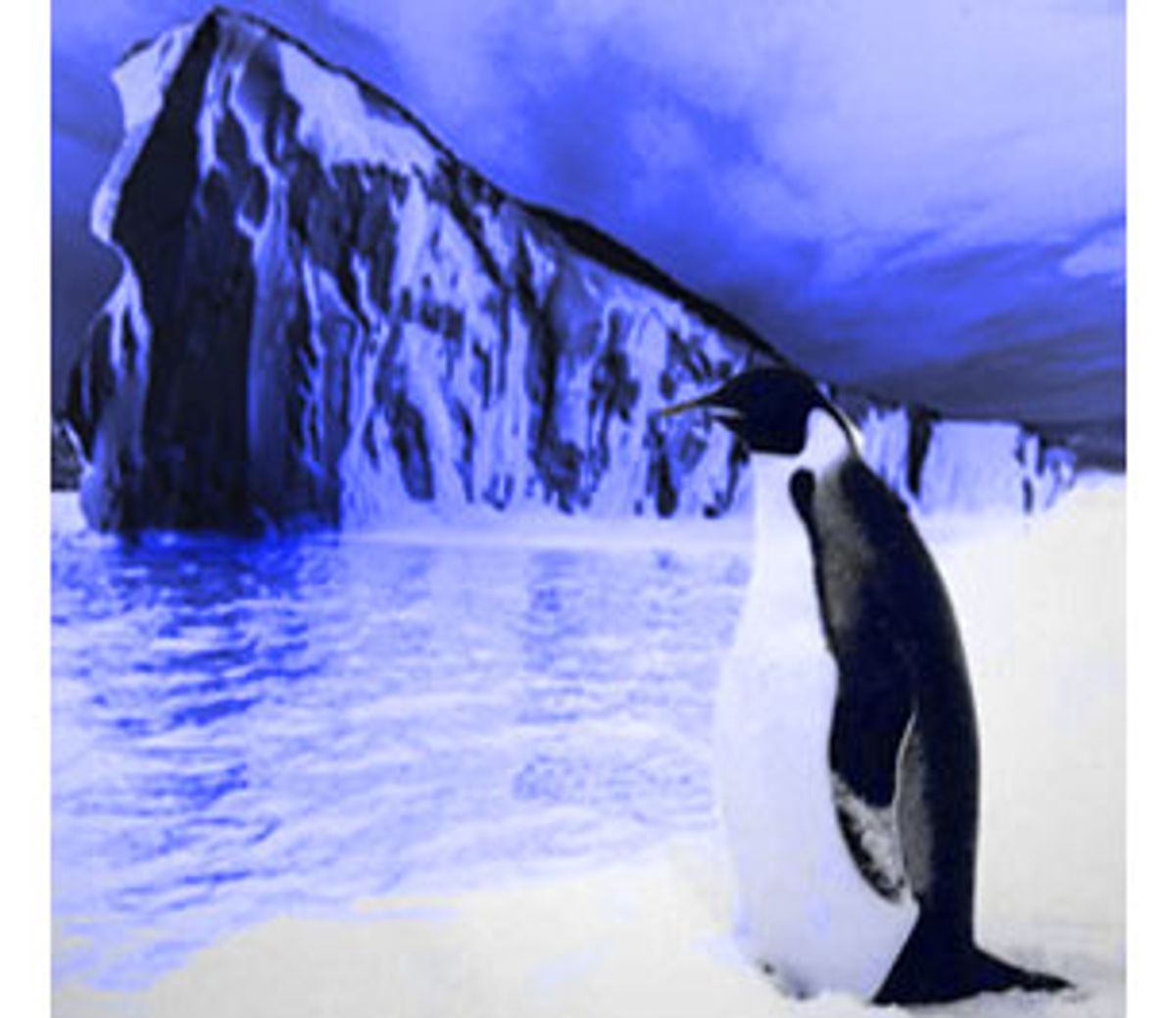 The cold Antarctic air was filled with albatrosses, terns and skuas; the
seas were alive with flotillas of penguins; in the distance, it was said, a
pod of humpback whales was cutting through the waves. But the small boy on
the boat deck, 8 years old, towheaded and dressed from head to foot in
brand new designer polar wear, had evidently on his mind more pressing
concerns than the wildlife of the Southern Ocean.

"Daddy," he inquired, blurting his question without warning into the stiff
breeze, "just what do the initials YPF stand for?"

His father, who was dressed in a similarly impeccable cocktail of primary
colored fleeces and ballistic nylon, looked down with an expression of
benign condescension.

"Surely not YPF, young man," he replied. "You must be thinking of YPO -- the
Young Presidents Organization."

The child responded swiftly, in an exasperated tone. "I know the difference
very well," he hissed. "The YPO is the reason that we're here. But YPF, YPF,
they're the letters I kept seeing in Argentina all the time -- they are
written all over the place. Surely you remember?"

A light of paternal recollection suddenly snapped on. "Of course, of
course," said the father, chastened. "YPF, I remember now. It is an Argentine
oil company. Very successful. Very big. Everywhere in the south."

The child, clearly much relieved, nodded sagely -- careless still of the
birds wheeling above his head. "That's what I thought. So tell me, Daddy --
do I have any YPF in my portfolio?"

A number of people who up to this point had been watching one particular
albatross wheeling magnificently in the wind suddenly felt, as they said
later, compelled to listen.

"No, young man. You must remember that when we chose your portfolio last
year, we looked at YPF and decided against it. So no, you don't have any."

The boy's sister, who was perhaps 9 years old and of impossible beauty
and perfect teeth, then piped up. "Well, if YPF are successful, why don't
we reconsider? Let's look at their numbers when we get home. It might be a
nice souvenir."

This particular Young President -- who had
paid without wincing $40,000 to be here, and who had been
invited to pay and come because he, like all YPO members, had by the time he
had turned 40 run a company that had at least $7 million dollars in annual
revenues -- would have a formal conference with his children upon their
return to Park Avenue, or Coral Gables, or Newport Beach. At the meeting, with the broker conferenced in, no doubt, the
trio would discuss whether or not to include some thousands of shares in an
obscure but up-and-coming Patagonian fuel company in the list of holdings
that would ensure the future security of this 8-year-old's spending
money.

Once this plan had been decided, the three trooped happily
downstairs. "The shop ought be to be open soon," the young girl declared.
"There might be something to buy."

It is said by the Canadian entrepreneurs who have organized this venture
that never in history have more human beings been brought to Antarctica at
any one time: Fully one thousand members, spouses and offspring are
here for the YPO's Millennium Celebration. Were this exercise simply a
matter of number alone, it would rank among the more impressively bizarre
and daunting sights ever witnessed on this huge and lonely continent. The
scenes of hundreds upon hundreds of people walking on the beaches of Half
Moon Bay, or on the volcanic shores of Deception Island, are quite without
precedent. Yesterday, places heretofore known only to Shackelton, Scott and a cluster
of scientific researchers, places that are harsh and isolated in the best of
times, were suddenly looking as crowded as Fire Island on Labor Day
weekend. The chinstrap penguin rookeries, which usually present to the rare
visitor a scene of astonishing avian overcrowding, looked today to have
amply found their match -- as numerous as the little birds were, their legions
of visitors belonged to an army of equal size and strength.

But then again, Deception Island this midsummer's evening is perhaps not
best compared to Fire Island -- it is in tone more like one of the swankier
beaches of East Hampton or Nantucket. For this YPO expedition is not just
an exercise in numbers, prodigious though they may be. It is also a venture
that involves a staggering agglomeration of great wealth and power, and the
hundreds of men and women who were picking their way today through the
mounds of penguin guano, or being dive-bombed by frantically
nest-protective terns, were proudly carrying into the deep south YPO banners
proclaiming them to be vanguard of the corps d'elite of the modern
industrial world.

There were men splashing through the hot springs of Deception who could
without second thoughts buy the entire fleet of boats that brought them all
here (including the flagship, a former American troop ship, now owned by
Greeks, crewed by Goans, registered in Panama and chartered by Canadians).

Picking their way through the shattered remains of beached ice floes were
founders of Internet companies, retired 40-year-old venture
capitalists, Indonesian owners of Coca-Cola franchises, South African steel
magnates, Venezuelan stockbrokers, a Filipino who had brought 22 members of
his family and who communicated with them around the ship by walkie-talkie,
and more trophy wives than can be found in a West Los Angeles
country club.

The one such wife who managed to misplace one of her three suitcases
somewhere in the Argentine city of Ushuaia refused point-blank to emerge
from her cabin for the first three days of the voyage -- concerned
principally that her rival wives might see her lamentably low stocks of
Chanel frocks and Prada shoes. No amount of calling on the Iridium phone
could solve her problem: The lady had to resort to buying from the ship's
selection of cruise wear, weeping noisily at the thought of what a common and
unsophisticated drab she would appear at the ship's Grand Millennium Ball.

This dispatch has to be written a few hours before said Ball begins --
satellite communications down in these latitudes are notoriously unreliable
-- and so I cannot be certain how this saga's climactic moment will unfurl.
But I do know that at midnight, it will still be light enough to read a newspaper -- the sun sets on Deception Island, but
only briefly, and barely -- and there will be singing, dancing and celebrating to such
celebrities as the Chieftains, Dan Aykroyd and Art Garfunkel (who many
people here thought had died in a plane crash a couple of years
ago, prompting others less casual about the Zeitgeist to remind them gently
of the passing of John Denver).

Among those likely to be twirling on the
three dance floors is Robert F. Kennedy Jr., who is here with an enormous
retinue of family, and who has been speaking eloquently in the lecture
hall on how laws and lawyers (he being one) might help preserve our
environmental future; and somewhat more surprisingly, we will doubtless see
a spirited rumba or mamba by former South African president F. W. de Klerk, who has been
speaking also, apologizing publicly to the guests for the evils of his
country's past, and doing so, all agree, in true millennial spirit.

There will, however, be no fireworks at midnight; nor, since it is so cold,
will there be any cause for anyone to ever go out on deck. The bands will
play below, the Krug will flow and the Iridium phones closest to the
portholes will ring, with news and greetings and word of possible businesses
to acquire and portfolios to inflate. All told it will be a warm and happy
affair, well insulated from the chill of reality, as all such celebrations
should be.

A few score feet up above, away from all the din and happy exercise, the
ice-cold Antarctic winds will be soughing against the ship's rigging. The
albatrosses will wheel in the breezes; the terns will flutter peacefully
through the ratlines; and in the distance a flock of penguins will rise
from the water and perch themselves back up on the now quiet and empty land.

Across the other side of the lagoon a pod of whales will rise and fall
blackly in the water, unseen, untroubled.

And an iceberg will tumble mightily from the 100-yard-high footwall of a
glacier, setting in train a small tidal wave that, when it arrives, will
dash against and lift and rock the boat -- in a way that no one but the
officer on lonely watch up on the bridge will either feel, or notice, or
remember.