The softer side of Henry Rollins

Can it be? In his new one-man show, Black Flag's former lead singer seems to be wandering toward the land of warm 'n' fuzzy. 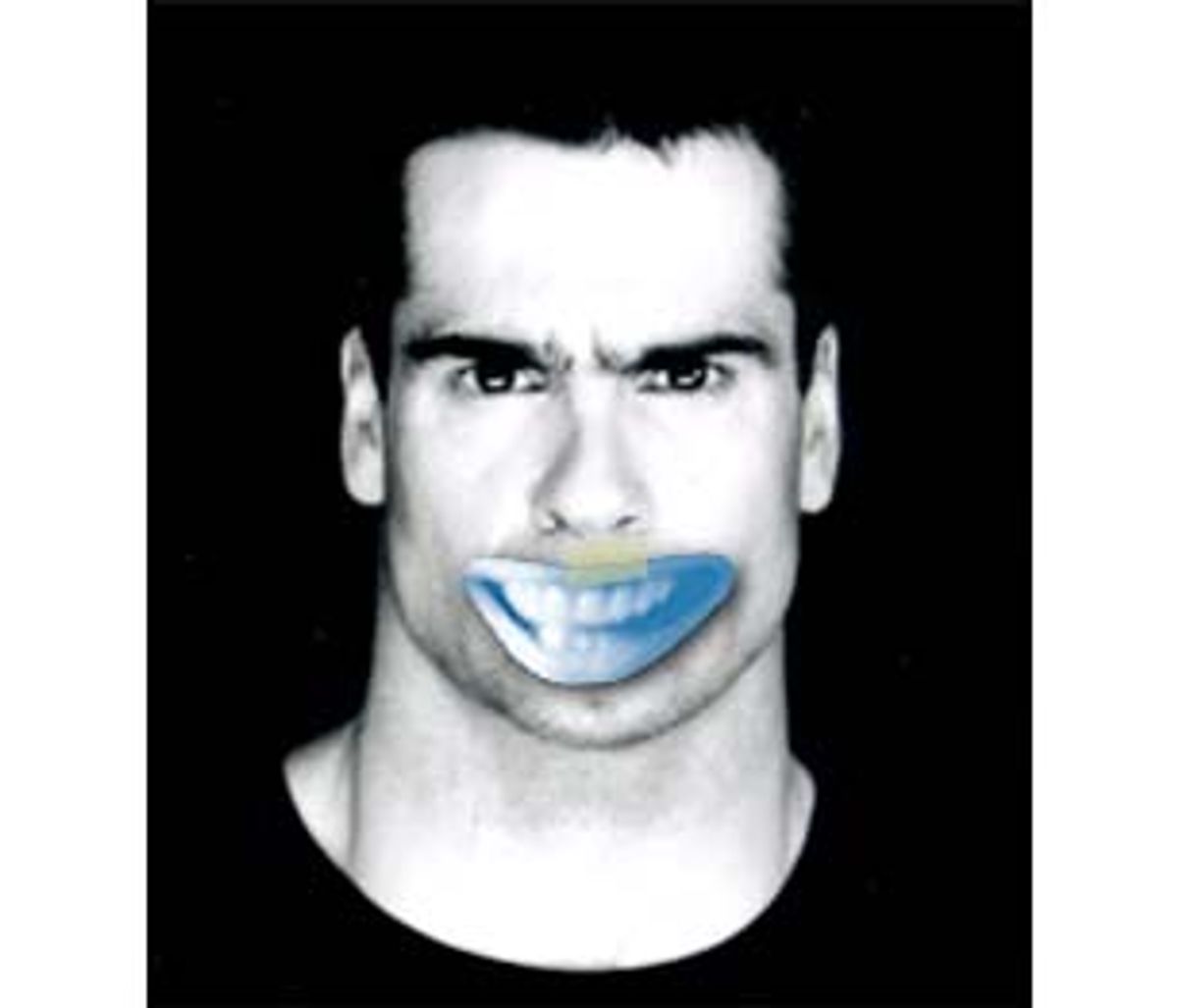 A great friend of mine, who happens to be a big bodybuilder and martial arts tough guy, used to hang out with Henry Rollins, and he maintained that there was an aspect of Rollins -- the fist-shakingly intense ex-Black Flag front man and barking social commentator -- that didn't quite gel.

My friend would ask, "Whatcha been doing, Henry?" and Rollins would respond by saying, humorlessly, "Fuckin' and killin', man. Fuckin' and killin'," which led my friend to question exactly how much of either one he had, in fact, been doing. The answer, if I am to go from Rollins' new spoken-word show, "Smile, You're Travelling," now at the Westbeth Theater in Manhattan, is: not much. But he's doing a lot of other stuff. He's going through important changes.

I've liked Rollins ever since I saw him perform "Liar" at the 1995 Grammy Awards. He was so evilly sardonic it made the whole glitzy event look self-conscious and idiotic, which I thought was wonderful. So, when I heard the Getz-Gilberto lounge music in the lobby of the Westbeth, I had it figured as the same type of carbolic, balls-to-the-wall Rollins sarcasm and irreverence, but apparently it was sincere.

Rollins, hard up against the specter of turning 40, has discovered a new strategy for his Rollinsness: goofy self-effacement and autobiographical navel-gazing. It would be disappointing if you had a big love investment in Henry the Darkly Intense Enigma of his earlier perpetrations, but if you had no stake in the |ber Rollins and were, like me, just curious to see where this perennially clever oddball was taking himself, it was good clean fun, rated PG. It was so edgeless, in fact, it could be considered round.

Ever the cultural chameleon, Rollins has apparently cast asunder his pylon-necked, tattooed, punk rock motherfucker persona of yore and waded hip-deep into strangely adept, B-rated, borscht-belt stand-up comedy of an earthy, used-car salesman variety. He could effortlessly slide into being one of the many faceless guest comics on Letterman. It was mind-boggling how mainstream his choice of heard-'em-a-million-times joke topics was: driving in L.A. vs. driving in New York, espresso culture jokes, models on cell phones jokes, the Starbucks/penis lawsuit.

In short, all the harmless, inoffensive prattle churned over and over endlessly by virtually every hack comic and obnoxious morning DJ in America. What is weirdly impressive is that he's got the relaxed, dumb and calculated audience manipulation, replete with political-speech "involve the audience" gesticulations, down to Shecky Green-type pro levels -- like he's been working schlock comedy clubs nightly for 15 years.

The best parts of the two-and-a-half-hour (!!) show were during the approximately one-fourth of the evening when he strayed from generic stand-up and told idiosyncratic tales that only Rollins, with his specialized niche of rock stardom and unique batch of hard-assed neuroses, could tell, in the way only Rollins could tell them. He spoke of his gleefully dark appreciation of Slayer albums: "I buy 'em just because they make 'em. If they're going to go through all that ... hell, I'll give 'em $15." He did a lengthy routine on being famed Spartan Henry Rollins and the humiliating pussyness of shopping for soap holders at Bed Bath & Beyond.

He's actually pretty good at transforming his beady little ferret eyes and pit-bull jaw for the sake of impersonations -- it's a face that is more malleable and expressive than its stoniness would imply. He does a very funny squeaking impression of the hapless kid from "The Sixth Sense" -- "I see dead people!" -- and does a fine retelling of his encounter with Motvrhead on a business-class flight ("I will not be inconvenienced by a mere airline," mimics Rollins as Lemmy with excellent Lemmy accent, while mime-pouring himself a 10 a.m. tumbler of sinister amber fluid).

Rollins seems to be tripping over his own machismo lately, so he does a lot to undermine it. He professes, in many different ways, that women are never interested in him, which comes off as some kind of artless jackhammering for compliments, like all of the ladies in the audience are supposed to shout out, "No Henry! It isn't true! I'd fuck you any day, lover!" He makes a lot of gay jokes ("Orrin Hatch really needs a finger up his butt," he crows, with knowingly raised eyebrows) of the suggesting-he-could-turn-gay variety, which comes off as more false-humility and super-masculine locker-room japeries.

He's like some huge, over-spermed NFL bruiser who flounces around and acts nellie and squeezes other men's butts to be cute. I guess it's his way of transcending being an insensitive, homophobic rock 'n' roll knucklehead, a status that he barely escapes by the skin of his dick, but he escapes it, nonetheless, and comes off most of the time as at least 45 percent sentient.

Maybe I'm being overly salty, because I can kind of dig where Rollins is coming from these days. He seems to want to be a solid member of the human race -- he's joining and accepting the world in the embarrassing, intimate way that new parents do, and he craves likability and acceptance in return.

I recently heard about a woman poet who had an abortion at the age of 41 and thought it was such a radical rejection of the feminine instinct that she's now devoted all of her energy to writing a big breakthrough book about not having a child, in a way that screams, "I'm turning all my maternal energy into this career and making the career the baby instead of having a baby," which I think is really the same as having a baby, just more fame-brainwashed.

Rollins, with this show, seems to be doing the same thing. For all his talk about being a rootless samurai and having no woman nor home life, and only being truly alive when he's on the road, it sounds like he's adolescently protesting too much -- under it all, he seems to crave nesting, and you can tell he secretly cherishes all the faggy aspects of personal home design. He likes Bed Bath & Beyond.

As little as he cares to admit it, I think he's dying to fall in love with the Right Person, some big hot smart girl who'll kick him in the ass. I bet he really wants kids, too. He's painfully ready for the whole gutless softening and big surrender to conventional life, but he's too Rollins to own up to it. If his wild-man ego were slightly less cumbersome, he'd be writing unabashed self-help books and playing Santa Claus for the local nursery school.

Toward the end of "Smile, You're Travelling," he starts lobbing out crusty old chestnuts of bumper-sticker wisdom -- "Live or Get Lived." "If You Wanna Know, You Gotta Go." "Knowledge Without Mileage Means Nothing." He stops just short of saying, "Be ... All That You Can Be."

"The world is your oyster," he said, irony-free, making even the slobbering, Rollins-enslaved, teenage fan boys groan with dismay. "The way I see it, you get about 65 good laps around the track, and after that, somebody has to help you shit."

Oh Christ, a lot of us thought simultaneously, he's gone Oprah. The audience was so well Oprah-trained that whenever he said something Human and Uplifting, some Oprah cue-monkey accustomed to the TV routine of clapping every time something dully inspirational is said would pock out a couple of claps and then realize where he was and get embarrassed and stop. The whole thing reminded me of a billboard in my neighborhood aimed at teen gangland drug addicts -- a bunch of tough, tattooed young dudes are sitting, talking in a small room around a foldout table. The caption reads: "Now He's High on Support."

According to the press material, "Smile, You're Travelling" is a strictly solo, all-Rollins venture -- he has no director, no editor. He needs both, a lot, but even at his most windy and self-indulgent, Rollins is a fuckload more fun than 96 percent of all other small-stage offerings.

The fact is, Rollins is smart, and he's funny, and he's quite likable and amusingly sexy in a sweaty dirty boy kind of way, and -- get this -- he's kind, so you can sit there through the incredibly long stretch of clichi-studded ranting and it's kind of like listening to some nicely beer-inspired Life of the Party Raconteur. He's flapping around pretty well under the attention spotlight and doing all the conversational work so you can just sit there and grin on the couch. All in all, it's a pretty pleasant ride.

Our Henry's calming down. He's realizing his own mortality and foibles, groping toward humility and trying to let us see him under the tattoos, just like he'd have to if he were a normal, non-Rollins human being. Weirdly enough, at this phase in his kicky life, we -- the audiences of the world -- are Henry's wife, we're his bitch, we're his home, where he generates his energy and gets his love and feedback and tolerant understanding. It's pathetic, in a way, but also very endearing. You end up feeling like his friend. He's a cute and lovable monster.