Do we really need to know how to make what Sting eats for lunch? 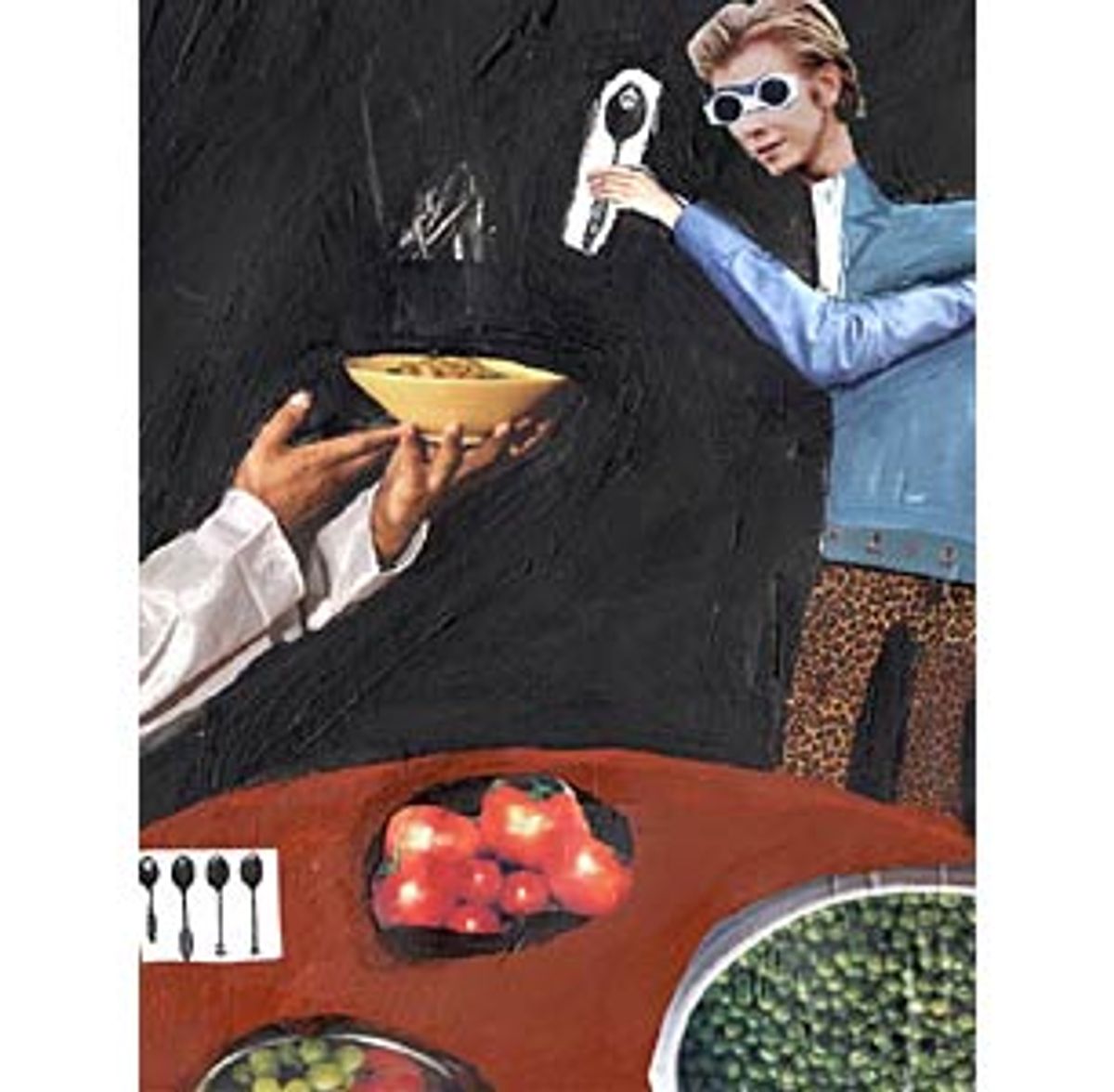 Now that we had all this land the most exciting prospect was growing our own food on a large scale and achieving some measure of self-sufficiency. Moving to Lake House brought back to me my childhood dream of living on a farm. Although Sting and I are both from urban working-class backgrounds, it is with some sense of going back to our roots that we have come to Lake and are trying to live off the land. My father and Sting's father were both keen vegetable-growers 

What's the dumbest thing about this passage?

A) Claiming that the biggest thrill of owning a 16th century English manor on 60 acres is that it permits one to grow one's own food.

B) The fact that Trudie Styler calls her husband Sting instead of Gordon.

C) The notion of a jillionaire rock star "living off the land."

D) This equation: "My father was a keen vegetable gardener" + "We bought a mansion" = "We are going back to our roots."

The answer, of course, is E). Starting any review with this hoary old multiple-choice formula. But what I'm tryyyyyyyying to get at is: Celebrities write some of the most worthless cookbooks ever to wind up on the secondhand book table at the church rummage sale. Trudie Styler's The Lake House Cookbook is only the tip of the, uh, dumpling.

Still, "The Lake House Cookbook" is a good place to start because it's pocked with so many of the scars that afflict this genre. Styler and her minions assume that because she's semi-famous, her life is automatically interesting. Of course rich people are always fun to spy on, even when they're behaving so much like Marie Antoinette gamboling around the Petit Trianon that they should wear neck protectors. But it doesn't follow that what they eat is worth learning how to cook, especially when -- as in Styler's case -- their meals are prepared by a professional chef.

"More exciting than a restaurant, more spontaneous than party catering, Lake House is a chef's playground," chef Joseph Sponzo writes. (He is the book's main author; Styler makes a few observations about organic farming and house renovation, then turns the text over to him.) "Working at Lake House is ideal for me because the majority of ingredients come straight from the farm and garden, all of them rich with flavor and nutrients." And what about us, Joe? How can we get into the playground? Well, we can't.

"Lake House ducks are incredible," Sponzo marvels in his roast duck recipe. "They have just the right amount of fat to meat and a real gaminess of flavor that is not overpowering." Where people who are not married to Sting might find good ducks is never mentioned, though Sponzo does tell us where we can pick lavender to garnish the potatoes we serve with our duck. "We have it growing in the front walk at Lake House." (Even Martha Stewart doesn't slam the door in her readers' faces this hard.) Moving on to chocolate soufflis with chocolate dog tuiles, Sponzo says, "The tuiles for this dessert were inspired by Finbar and Gideon, the two Irish wolfhounds at Lake House, but you could make the tuiles a different shape if you prefer." No! No! I want my cookies shaped like Sting's dogs!

The recipes in "The Lake House Cookbook" are mostly unachievable by the home cook, who is unlikely to feel like making spring vegetables with carrot ravioli, truffle vinaigrette and parmesan tuiles even if he or she has access to "10 pea shoots with flowers" and three kinds of asparagus (white, green and wild). The photography is exquisite, but what else would you expect? As far as I can see, this book's target audience consists of two people: Trudie Styler and Joe Sponzo. Maybe they thought it would come in handy for her on his days off.

Who's your favorite Chippendale? I think mine's the Asian guy juggling the tomatoes on page 42 of In the Kitchen With the Chippendales, another work whose intended audience is impossible to figure out. Why was this book published? Do people who go to Chippendales "concerts" know how to read? Do they care about rich, sensual prose like the note accompanying the recipe for Oysters Rock-Yer-Fella?

Your lover is a sexy pirate and you are his wench. You're in a very adventurous and playful mood. You can almost smell the salt air and feel the ocean breeze. You look every bit the wench wearing your sexy off-the-shoulder peasant dress complete with bosom-enhancing lace-up corset. It practically offers you up to him. Of course, he likes what he sees. It's time to serve your pirate his tasty oysters. You inform him that whoever discovers the "pearl" gets their sexual wish for the night. The rest of the night it's Oysters Rock-Yer-Fella while you shiver his timber.

Woo woo! It's tempting to quote the entire book, especially since no human being will ever buy a copy. Not even as a present: What kind of guy would give his girlfriend a Chippendales' cookbook? I'll confine myself to mentioning that there's a recipe for I'm Just Wild About Saffron Potatoes. Oh, and one for Strawberries Moan-an-off -- excuse me? -- and one for South of Her Border if You Think You Can Afford Her. And look! Even one for Woo Woo! Woo Woo is a drink in the "Lubrications" chapter, which also includes Creamy Wicked Willy and Fancy Licker-ish. All of these are illustrated with photos of male models in poses you can probably figure out for yourself.

 Oh, I forgot about bridal showers. I guess "In the Kitchen with the Chippendales" might make an OK shower present for the most horrible kind of bride-to-be. But as long as we're on the topic of heads that deserve to roll, I would happily guillotine everyone associated with this waste of paper.

Still, my New Year's resolution was always to be nice about everything, so let me balance my previous meanness by talking about two new cookbooks whose authors don't deserve the guillotine. One you have to buy right now is the adorable Cocktail Food by Mary Corpening Barber and Sara Corpening Whiteford. The Corpening twins run Thymes Two Catering in San Francisco, which is a good sign. Caterers know how to make maximum-impact food with minimum work. This approach is especially important for cocktail food, which is so finicky and labor-intensive that it's not worth making unless it's really, really good. (As Peg Bracken said in "The I Hate to Cook Book," "A dish of Macadamia nuts is usually emptied faster than the plateful of bread-rounds fancied up by loving hands at home.")

I made Open Sesame Shrimp -- shrimp coated in sesame seeds and served with a tahini-ginger dipping sauce -- at my last party, and people inhaled it. I expect them to do the same with bayou biscuits, which are sandwiched with andouille slices, and with peanut-curry chicken salad in wonton cups, and with Turk-n-Roll (OK, I admit the names in this book are a little dorky -- but not as bad as in the Chippendales book!), for which you roll tortillas around a smoked-turkey filling, bake them and serve them with a mole-sour cream dipping sauce. In fact, I plan to use this book for the rest of my life.

Another book that sent me running into the kitchen is the BowlFood Cookbook by Lynne Aronson and Elizabeth Simon. The premise here is that everything tastes better in a bowl. Which is obviously inaccurate: A steak, for instance, would taste a lot worse in a bowl. What the authors mean is that food that has to be served in a bowl is better than other food -- and from a comfort standpoint, they're right. "Food served in bowls is unintimidating and homey, inviting and ready to be consumed. Everything in the bowl is conveniently chopped, minced, or sliced into bite-size morsels, with the exception of noodles, and they're so much fun to eat, who cares if they need to be twirled and slurped?"

"BowlFood" starts out with 20 broth recipes -- some basic, some intriguingly novel -- and moves on to various subjects: soups; "Hearty Bowls" such as roasted pork loin with honey-hoisin marinade; noodle, pasta and rice bowls; salads; and my two favorite chapters, "Dumplings and Doodads" ("irresistible little snacks and go-withs") and "Great Little Bowls of Fire and Spice" ("Spicy combinations from a range of ethnic traditions to use as rubs, glazes, marinades, dips, and dollops"). There are a few bowl desserts as well -- bread puddings and ice creams and so on, though this chapter seems a little tacked on. The book's basic concept is strong enough without it.

"BowlFood" isn't as attractive as it could be -- its typeface is navy, and its only adornment is cartoony illustrations of different kinds of bowls -- and occasionally it, too, stumbles into the cute-name tar pit. Cool Hand Cuke Soup, True Grits with Grilled Marinated Squid, No Choke Artichoke Stew -- all of these do a disservice to their recipes. My New Year's resolutions for cookbook authors: No famous people showing off. No Chippendales books, ever. And leave out the funny names from now on. 'Kay?