Who loves you, Wicks?

I am the mother of a small dyke cop. At least she wears a bulletproof vest. 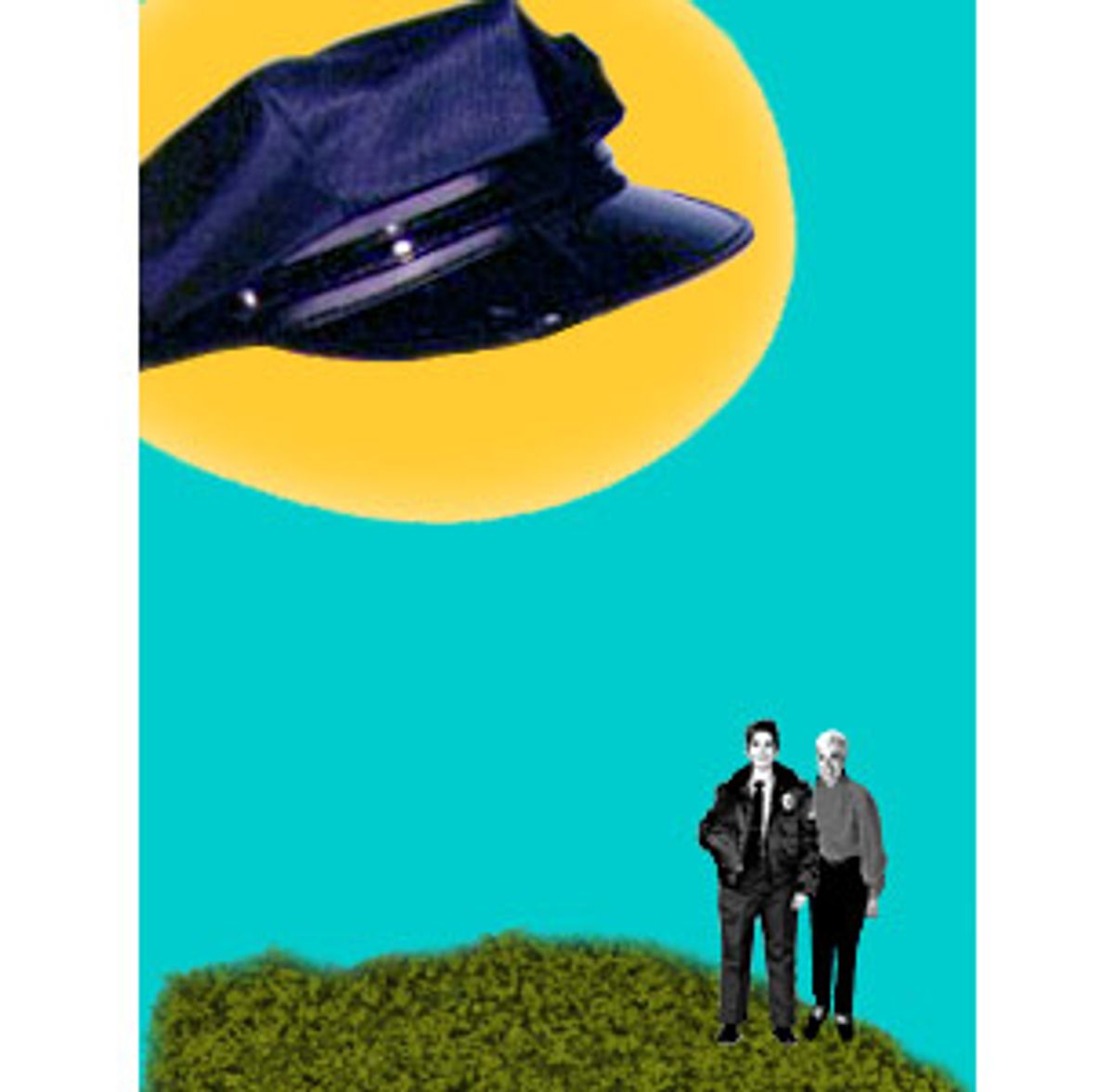 My husband Roy and I are having dinner with friends. We begin talking about our kids, who all are in their mid-20s. Eben, our best friend's son, lives in Brooklyn
and works nights at a wine bar in Tribeca so he can go on auditions during the
day. He's already been in a movie. Sarah, the daughter of other close
friends, works for an Internet design firm and lives in Soho. Her brother Adam
is doing well as a journalist. My daughter Ali, who sometimes refers to herself
as a "small dyke cop," has just received a check from her grandmother so she
can buy a bulletproof vest.

We all laugh. We don't know what else to do. None of us have great memories of
the police. When I was a kid, the cops in my Brooklyn neighborhood hung out in the candy store. They seemed more menacing than the neighborhood criminals, who were far too busy running numbers games to offer any threat to regular people.

Police were the brutes at the 1968 Democratic convention in Chicago. Everyone
at the table is old enough to remember that. Police stood at the edges of
demonstrations against the war in Vietnam, just waiting for someone to provoke
them. Most of my friends took part in those demonstrations. If I press for the
image of a noble officer, only Serpico comes to mind, and what mother wants to
think about her daughter being set up by fellow cops and getting shot in the face -- even if the experience did yield a book and a movie deal?

Learning that Ali was gay was nothing compared to hearing that she was
abandoning a liberal arts education to enroll in a criminal justice program
with the hope of eventually attending the police academy. People have died
at the police academy. Really. Just a few years ago a recruit died of kidney
failure because the drill instructor wouldn't let him drink enough water. Three
or four others ended up in the hospital.

Ali took yoga as a winter sport. She's always hated authority. ("Yes, but" is
her favorite answer in any argument.) Yet she went to the academy and
did better than simply surviving the physical and psychological challenges of her
training. She earned the award for academic achievement, made me cry at her
graduation and now she's a cop in a blue uniform and black boots. She wears a
gun on her hip and handcuffs hang from her belt -- along with a special-issue
flashlight, a huge key ring, a baton and other things I can't remember. The
belt is heavy enough to bruise her slim hips. The bulletproof vest is stiff
and hot, but because she made a promise to her grandmother, she wears it, even
in 90-degree heat.

At dinner I tell my friends about the women's self-defense course Ali teaches.
Roy talks about her community policing efforts. Our friends tell us that we are
wonderful parents. I accept the compliments. I don't tell them that I am jealous because their kids are safer than my kid and because their kids will probably earn more money over their lifetimes, enjoy more autonomy at work and never have to say, "Yes sir, no sir, whatever you say sir."

Jealousy such as this is an unattractive fact of motherhood. It's the way I
felt when Ali was 2 and wouldn't eat anything but raisins and Cheerios
while my best friend's daughter ate everything, even liver and fish. I could
practically see Amanda's little brain cells developing, and sometimes I thought
it wouldn't hurt her to miss a meal or two. Sometimes I wanted to grab the
spoon from her chubby little fist. But instead I smiled at my friend Lydia and
told her Amanda was certainly a great eater and, by the way, did she ever worry
about those permanent fat cells that develop early -- you know, the kind that live in your thighs forever?

Ali is doing better than many of her friends from college who are flipping
burgers while they pursue advanced degrees in fields where there are no jobs.
Ali has work that she loves, respect from her colleagues and tremendous
confidence. To her, conforming to a paramilitary organizational structure seems
like a small price to pay for the chance to make people safe. In fact, she
likes the discipline. To me it seems like awfully hard work.

She had the night shift for more than a year. Finally, she managed to get some days by juggling her schedule so that now she never has two days off in a row. She works on holidays. She goes to court on her days off. Because she's the only woman on her force and the sensitive crimes investigator, she gets called in the middle of the night to handle rape cases, even when she's not on duty. She routinely puts in 10 or more hours of overtime each week. She deals with many men who do not think that women belong on the force, let alone gay women. And she's not yet 25.

My friends and I move the conversation away from our kids. We talk
about vitamins and Andrew Weil; technology stocks, vacations and the cost of
furniture. We drink a lot of red wine and talk about our parents.
Our fathers went away in suits to work at jobs we knew nothing about. We all
lied to our mothers almost as soon as we learned to talk. Had to. Everything
fun was against the rules.

I don't think Ali lies to me about any of the important things. In fact,
sometimes she tells me too much. For instance, I didn't need to hear the story
about the man who tried to assault her at a highway rest stop. She went
straight for his crotch with the grab-twist-and-pull maneuver she had learned
in RAD (Rape Aggressive Defense) training and left the guy moaning on the ground. I tell my friends about that. Eyes go wide. Nobody laughs.

How did I raise a young woman with such courage? I am a wimp who hates to be
yelled at or hurt. If I stub my toe I start to cry. Ali routinely walks into
dark and lonely places where anything could happen. I am so glad she
has the vest. While my mother's gift helps keep her safe, I am quietly
calculating our home equity -- just in case she decides that she wants to
get the bad guys by going to law school.