A sweet-spirited and clever film for anyone who's ever been a sci-fi nerd -- or laughed at one. 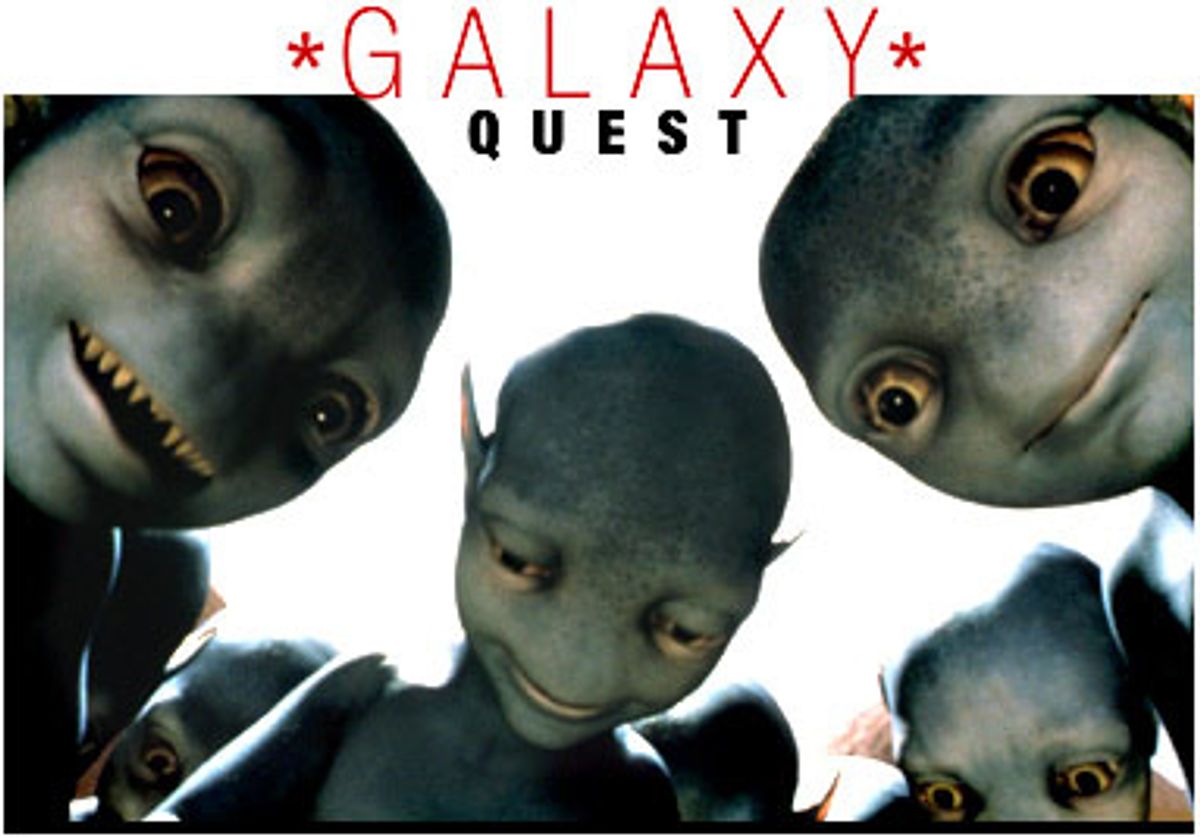 A few months back a friend and I happened upon a movie on TV that we knew we'd seen, and yet none of the details had any resonance. It was "The French Lieutenant's Woman," a big prestige picture of its day featuring big prestige stars Meryl Streep and Jeremy Irons. We could barely remember sitting through it the first time, and on this casual second viewing, it looked even more deadly and remote, numbingly dull and flat and vague. If the movie meant little to us upon its release, now it meant less than nothing.

Every holiday season there's a mad rush of prestige pictures along the lines of "The French Lieutenant's Woman," pictures like "Angela's Ashes" or "Man on the Moon" or "The Talented Mr. Ripley" that almost everyone is (understandably) curious about. And then there are pictures like "Galaxy Quest," the second-stringers that look dorky on the basis of their trailers, things that people figure they'll wait for on video, if they bother with them at all.

But why postpone pleasure? "Galaxy Quest," the picture most likely to have gotten lost among the big-gun holiday offerings (at least with critics), is a sweet-spirited, clever little comedy, and it's not just a diversion for science-fiction nerds.

In fact, it's both for science-fiction nerds and for anyone who's ever laughed at them -- and doesn't that cover just about everybody? Dean Parisot (who also directed the charming "Home Fries"), working from a script by David Howard and Robert Gordon, starts out by introducing us to the mostly cranky stars (Tim Allen, Sigourney Weaver, Alan Rickman and Tony Shalhoub) of "Galaxy Quest," a popular TV series that was canceled years ago but lives on in reruns and the pocket-protector-clad memories of its weirdo fans. Their professional lives are nothing but a string of conventions and electronics-store openings, dismal events where they sign autographs like automatons and field impossibly detailed technical questions about their "ship."

When he's off-duty, that ship's fearless Capt. Peter Quincy Taggart is just seedy-looking actor Jason Nesmith (Tim Allen), who's so desperately egotistical that he'll take any gig that comes his way. When a group of black-clad alien beings with shiny ebony bowl-cuts (they look like classier, friendlier versions of "Saturday Night Live's" Dieter) approach him at a convention, trying to nail him down for some forthcoming event, something tells you they're not just obsessed fans. For one thing, the quality of their "pleather" outfits is just too ... good.

And sure enough, it turns out that they're Thermians, beings from the far-off Klatu Nebula who've taken "Galaxy Quest" to heart even more resolutely than the show's human fans. In fact, they think it's real (they refer to the episodes as "historical documents"), and have reconstructed their whole culture using the show as a model. In their hour of need, they've come to ask Capt. Taggart for help. He recruits his grumbling crew -- they resent him heartily for his arrogance and rampant scene-stealing, but hey, it's work -- and the ridiculous adventures that used to be the stuff of their TV episodes, including reptilian monsters and powerful force fields, suddenly become real-life matters of life and death.

There's something teasingly funny about the idea of creating a universe in which the jobs of has-been actors really do matter in the grand scheme of things, and "Galaxy Quest" mines the theme intelligently without milking it. Its most obvious pleasures come from little riffs and gags that seem effortlessly tossed off: The crew is joined by Guy (Sam Rockwell, in a performance that seems annoying at first and mutates into something rather endearing), who's elbowed his way into their company on the basis of his guest appearance on a single "Galaxy Quest" episode in which he was quickly killed. When the crew faces some very real danger, his eyes get the widest because he's sure he'll be the first to go: "I don't even have a last name!"

"Galaxy Quest" features a number of special effects -- exploding spaceships and the like -- that are pulled off nicely, as well as all kinds of creatures and beasties (including a monster made of rocks that looks like a moving Henry Moore statue). And its storyline is worked out ingeniously, with almost every element falling into place by the end. What's more, every character is treated generously. Even the most annoying fans, the ones most likely to end up as the butt of cruel jokes, get their moment of glory.

And the performers know how to hold everything together, tossing off quips that keep us sustained even when the action drags a little. Allen, who has always struck me as little more than grating as an actor, puts his unlikability to work beautifully here: It gives him a kind of pulsating presence. You keep wishing he'd just go away -- but not really. Sigourney Weaver as Gwen DeMarco (her series character name is Tawny Madison, whose pneumatic properties are generally enhanced by her half-zipped space suit) funnels all kinds of slyness into her lines, without ever distancing herself from the performance. You never get the feeling she's an established actress slumming it in a little comedy.

Alan Rickman is wonderful as a Spock-like alien -- his cranium is encased in that almost archetypal alien high-forehead makeup -- who's cranky because he's done Shakespeare on stage and yet can't get beyond his TV series persona. And Tony Shalhoub, always a delight, makes a great deadpan tech guy. ("The ship is breaking apart. Just F.Y.I.")

Yet it was the Thermians who completely stole my heart. In space movies and television shows, there are so many instances where the alien characters seem to be nothing more than a careless afterthought or a cheesy way to add depth (Our planet is dying, we need your help, etc. and so forth). Parisot improvises on those conventions, but he also beckons us -- gently, before we even realize it's happening -- beyond them.

The Thermians are very carefully conceived so that we will laugh at them. How could we not, with their silly vocal tics, with those Tin Man smiles eternally plastered on their faces, with their characteristic walk that's more like an odd little trot?

But these aliens have such beautiful timing, and so much sheer presence, that I can't accurately compare them to any aliens I've seen on-screen before. Patrick Breen and Missi Pyle distinguish themselves far beyond their look-alike Thermian hairdos and mannerisms. Enrico Colantoni, as the Thermian leader Mathesar, is so awkwardly funny at first, so innocently sweet without being saccharine, that I wasn't quite prepared for what he does at the moment when his mettle is tested: His alien tics transform him into a creature that's heartbreakingly human. And I still can't get over a Thermian death scene that plays like a vignette from "Henry V." It involves only a minor character, but his face stuck in my mind for days.

That's not to say that "Galaxy Quest" is in any way high-minded. Its chief aim is to give us a good time; it's not trying to secure a highfalutin place for itself in the cosmos. But it's a good example of exactly of what you go to the movies for: enjoyment, obviously, but also to be surprised, to be moved by something that you just didn't see coming. Flipping through cable channels someday deep in the future, I'm bound to come across those Thermians, and I bet I'll remember exactly how they affected me. I'm sorry I can't say the same for Meryl Streep.