Like so many self-conscious directors, Julie Taymor wrecks Shakespeare's already disastrous play with her own horrific vision. 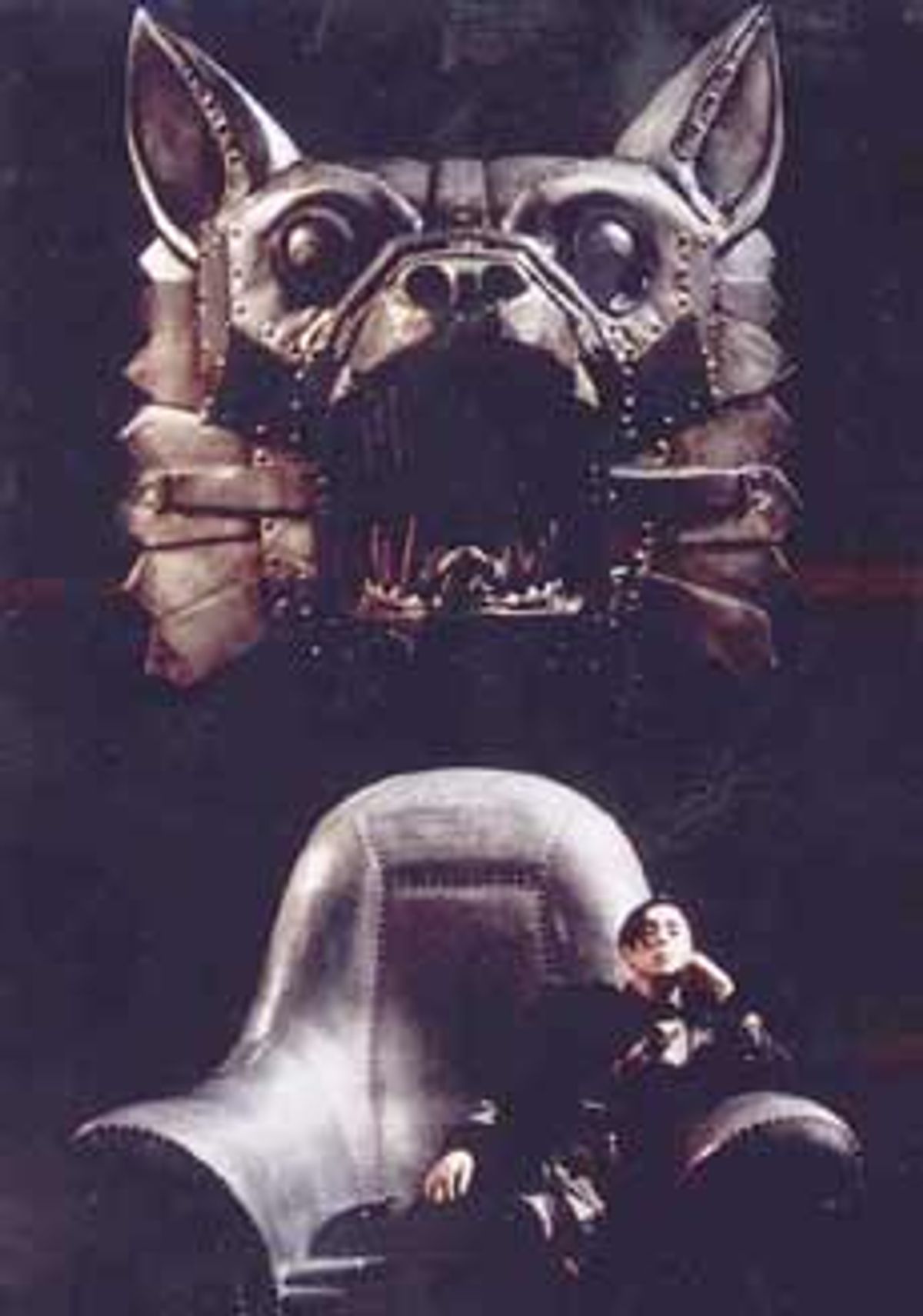 "Titus Andronicus," a horror show about the succession of power and the bloodlust for revenge in ancient Rome, is Shakespeare's most extreme play. At times, it's very near to Elizabethan pulp. You can tote up all the atrocities in his other plays -- like Gloucester's eyes being put out -- and still they don't come close to the grotesquerie here. Attackers rape a young woman, then cut out her tongue and chop off her hands so that she can not identify them. A mother is made to eat a pie filled with her own cooked sons. The carnage is at such a pitch that the other killings and dismemberments and tortures just feel as if they're marking time.

The play is filled with rage at the corruption of power and the inability to separate public duty from private obligation. But there isn't much poetry in it, and the memorable passages only point out how Shakespeare put his gift at the service of an obvious and brutally made point. And that's only heightened by the way some of the characters feel like first sketches for fully developed characters in later plays (Titus for Lear, Aaron the Moor for Iago).

No doubt one of the things Shakespeare meant to get at was the consuming, self-propagating nature of violence, but the characters behave barbarously and remain rather puny; they lack the dimensions that would give the play the sting of tragedy. At times, especially in the climax when the corpses start piling up like dominoes, "Titus Andronicus" seems much more like black comedy.

That may well have been the feel that stage director and first-time filmmaker Julie Taymor was going for. She opens the film in the present day with a boy playing war with toy soldiers. When his home is invaded by an ancient Roman soldier, he is spirited away to the Rome of "Titus," where he plays the role of Titus' grandson Lucius and remains a silent presence through much of the bloody action. It's an obvious point: The reality of violence far outstrips fantasies of violence. And the prologue alerts us that Taymor is not about to soft pedal the play's famous atrocities. (Though in fairness to her, she suggests most of the worst rather than showing them.)

But could her acclaimed stage productions have been as ludicrous as this? Maybe "Titus" would play as straightforward agitprop drama that took violence as its target. But Taymor's overblown technique turns the play into another sort of violent fantasy: campy art-house Grand Guignol.

When Titus (Anthony Hopkins) cuts off his hand to pay the ransom that will prevent his two sons from being killed by Emperor Saturninus (Alan Cumming), Taymor shows the severed hand being placed in a Ziploc bag. And when Titus' sacrifice turns out to be in vain and a messenger arrives bearing the heads of his sons, Taymor stages it like a drunken vaudeville number to work up the carefully staged display of the heads in the messenger's truck. In the climax, when Titus serves the captured Goth queen Tamora (Jessica Lange) the pie bearing her two sons, Shakespeare's stage direction indicates that Titus should be dressed like a cook. Taymor has Hopkins enter the scene in puffy white hat that makes him look as if he just stepped off a pizza box.

The director must have known, in both these instances, that she'd get a laugh. But the laughter distances you from any horror. And it makes no sense for Taymor to posit real violence against imaginary violence (such as the boy's playing with toy soldiers) when the violence is nothing more than a baroque version of what you might find in video games or dystopic fantasies like "The Matrix" (a much better movie).

This "Titus" looks like a jumble sale featuring the work of other directors and artists. Saturninus addresses the Roman people in a mock-Fascist setting that recalls the accounts of Orson Welles' 1930s stage production of "Julius Caesar" and the Ian McKellan film of "Richard III." Tamora's sons Chiron and Demetrius, who rape and mutilate Titus' daughter Lavinia before winding up as dinner, are kitted out in the tattoos and rock gear Baz Luhrmann used in his "Romeo & Juliet." Saturninus' orgies and the fat, leather-outfitted hookers who proposition Titus in the street have the worked-up "decadence" familiar from Fellini. And the "visions" that occasionally interrupt the film of golden-haired, trumpet-bearing angels, circus tigers and bursts of flame are like joyless forgeries of Joseph Cornell collages.

None of this is to imply that Taymor is better off left to her own devices. Like someone determined to be "cinematic" with no clear idea of what that means, Taymor zooms the camera to and fro, or falls back on strange angles. The filmmaking is so frenzied that when Titus murders one of his own sons, it barely registers. And things aren't much better when Taymor leaves the camera in one place. She destroys the moment where Titus first beholds the disfigured Lavinia by placing the four participants in the scene, each looking in opposite directions at a big, picturesque crossroads. The film takes place in so many locations chosen for their expressionist look that you can't imagine they are all in the same city.

Taymor has come up with one genuinely striking image. The mutilated Lavinia is found by her Uncle Marcus (Colm Feore) standing atop a tree trunk in a swampland of dead trees, with dead tree branches tied to her stumps in a mockery of hands and fingers. Playing, as it does, off Marcus' line "what stern ungentle hands/Hath lopped and hewed and made thy body bare/Of her two branches," the image works in tandem with the words and, for the one time in the film, makes the play's cruelty transcendent and horribly lyrical, instead of just garish.

Film versions of Shakespeare don't have to be merely straightforward renderings in order to work. Orson Welles' film of "Othello" does wonders with a greatly truncated text, and for all its excesses Baz Luhrmann's "Romeo & Juliet" does exactly what a production of that play should do: make you fall in love with the lovers and make you believe they love each other. But most of what Julie Taymor has done here is in the service of Julie Taymor. It's as if she deliberately chose "Titus" to show off what she can do with a bad play. (And also to make sure that there's nothing to upstage her.) She certainly doesn't serve either Shakespeare or her actors.

Hopkins' best moments are the quietest ones, as when Titus upbraids his grandson (his brother in the play) for killing a fly or, the most moving moment in the entire film -- perhaps because the simplicity of emotion stands out in the surrounding morass -- when he finds he can interpret the expressions of the now-mute Lavinia and realizes she is trying to tell him she "drinks no other drink but tears." As Tamora, Jessica Lange has a palpable hunger to play this avenging queen's deviousness, but Taymor hasn't probed the character to bring out the mother's love that sets her schemes in motion, so the role is rather cartooned (and Lange is treated cruelly by the camera).

A bad film of "Titus" is no great loss since so much of the play is so horribly over-scaled and callously cruel to begin with. But there's one thing about the anticipation Taymor's film has aroused that bugs me, and it has to do with the chatter that always seems to accompany an acclaimed stage director's venturing into the movies. The implication comes from an old, and never really discounted, prejudice that people in the theater know what they're doing in a way that can't be expected of movie people.

Of course, the best Shakespearean filmmakers, Welles and Kenneth Branagh, started in the theater. But they showed an instinct for moviemaking, an ability to bring the plays to life without falling back on clichid ideas of what was "cinematic." Taymor rushes from garish spectacle to static tableau, so intent on her vision of the play that she smothers nearly every moment of potential life in it. As "daring" and consciously avant-garde as it all is, her "Titus" brings back memories of the most miserable theatergoing experiences, the kind that have made generations of people hate Shakespeare, wedding the dry-as-dust approach to those horribly misjudged avant-garde productions determined to make old Shakespeare seem with-it. When a director's avant-garde notions consist of decades-old leftovers, the play isn't the thing that needs revamping.