Why I stopped being a vegetarian

It's anti-social, not necessarily healthful -- and besides, meat tastes good! 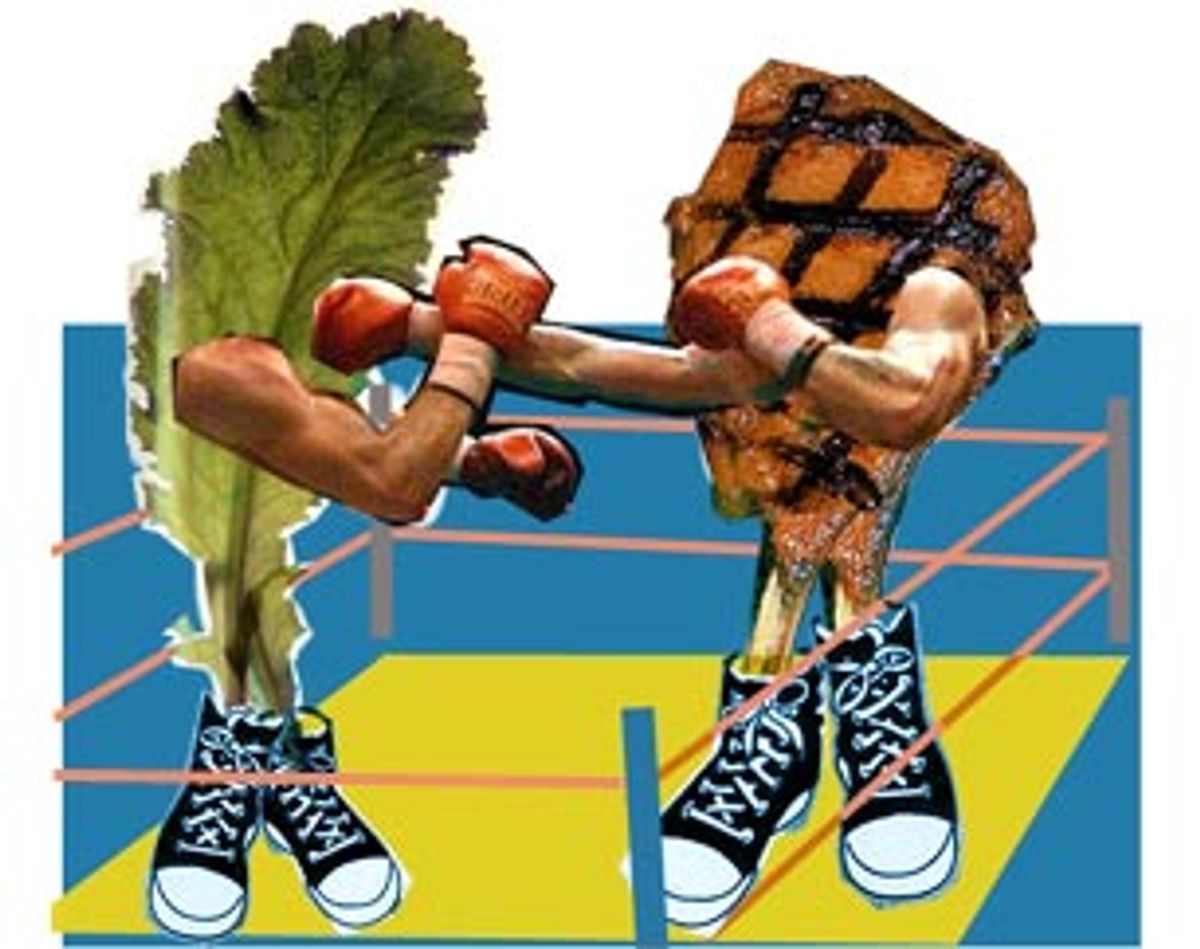 Until a few of months ago, I had been a vegetarian for 15 years. Like most people who call themselves vegetarians (somewhere between 4 and 10 percent of us, depending on the definition; only 1 percent of Americans are vegans, eating no animal products at all), I wasn't strict about it. I ate dairy products and eggs, as well as fish. That made me a pesco-ovo-lacto-vegetarian, which isn't a category you can choose for special meals on airlines.

About a year ago, in Italy, it dawned on me that a little pancetta was really good in pasta, too. After failing to convince myself that pancetta was a vegetable, I became a pesco-ovo-lacto- pancetta-vegetarian, with a "Don't Ask, Don't Tell" policy about chicken broth. It was a slippery slope from there.

Nevertheless, for most of those 15 years, hardly a piece of animal flesh crossed my lips. Over the course of that time, many people asked me why I became a vegetarian. I came up with vague answers: my health, the environment, the impracticality and heartlessness of killing animals for food when we can survive perfectly well on soy burgers. It was political, it was emotional and it made me special, not to mention slightly morally superior to all those bloodthirsty carnivores out there.

The truth is, I became a vegetarian in college for two reasons. One was that meat was more expensive than lentils, and I was broke, or broke enough to choose to spend my limited budget on other classes of ingestibles. The other was that I was not a lesbian.

This is not to say that all lesbians are carnivores; in fact, there's probably a higher percentage of vegetarians among lesbians than most other groups. But there was a fair amount of political pressure to be something in those days. Since, as a privileged white girl from suburban Denver, I couldn't really identify with any oppressed minority group, I was faced with becoming a lesbian in order to prove my political mettle. I had to decide between meat and men, and for better or worse, I became a vegetarian.

The identity stuck, even though the political imperative for my label faded. It wasn't an identity that ever really fit: My friends thought it odd that such an otherwise hedonistic woman should have that one ascetic streak. It was against my nature, they said. But by then, I'd started to believe the other arguments about vegetarianism.

First was health. There's a lot of evidence that vegetarians live longer, have lower cholesterol levels and are thinner than meat-eaters. This is somewhat hard to believe, since for the first few years of not eating meat, I was basically a cheesetarian. Try leafing through some of those vegetarian recipe books from the early '80s: You added three cups of grated cheddar to everything but the granola. Then vegetarianism went through that mathematical phase where you had to figure out which proteins you had to combine with which in order to get a complete protein. Since many nutritionists will tell you people don't need that much protein anyway, I gave up, going for days and days without so much as contemplating beans or tofu.

For whatever haphazard combination of proteins I ate, being a vegetarian did seem to have a stunning effect on my cholesterol level. This, of course, could be genetic. But when I had a very involved physical exam once at the Cooper Institute for Aerobic Fitness in Dallas, my total cholesterol level was a super-low 135, and my ratio of HDL (good) cholesterol to LDL (evil) was so impressive that the doctor drawled, "Even if you had heart disease, you would be reversing it." This good news, far from reassuring me that I could well afford a few barbecued ribs now and then, spurred me on in my vegetarianism, mainly because my cholesterol numbers effectively inoculated me against the doctor's advice that I also needed to lose 15 pounds.

"Why?" I asked. "Don't you lose weight to lower your cholesterol?"

He couldn't argue with that. Whether or not most vegetarians are leaner than carnivores, in my case I was happy to more than make up the calories with carbohydrates, which, perhaps not coincidentally, I always craved.

After the health rationale came the animal rights one. Like most vegetarians, I cracked Peter Singer's philosophical treatise on animal rights, and bought his utilitarian line that if you don't have to kill animals, and it potentially causes suffering, you shouldn't do it. (Singer, now at Princeton, has recently come under attack for saying that if a human being's incapacitated life causes more suffering than good, it is OK to kill him.)

It's hard to know where to stop with utilitarianism. Do I need a cashmere sweater more than those little shorn goats need to be warm themselves? Do animals really suffer if they have happy, frolicking lives before a quick and painless end? Won't free-range do?

My animal rights philosophy had a lot of holes from the start. First of all, I excluded fish from the animal kingdom -- not only because fish taste delicious grilled with a little butter and garlic, but also because they make it a lot easier to be a vegetarian when you go out to restaurants. Now that's utilitarian. Besides, as soon as you start spending your time fretting about the arguments that crowd the inner pens of animal rights philosophy -- do fish think? -- then you know you're experiencing a real protein deficiency.

I rationalized the fish thing by telling myself I would eat anything I would kill myself. I had been fly-fishing with my dad and figured a few seconds of flopping around was outweighed by the merits of trout almondine. (Notice that I, not the fish, was doing the figuring.) But who was I kidding? If I were hungry enough, I'd kill a cow in a heartbeat. I'd practically kill a cow just for a great pair of shoes.

Then there's the environmental rationale. There is no doubt, as Frances Moore Lappe first pointed out in her 1971 book "Food First," that there is a huge loss of protein resources going from grain to meat, and that some animals, especially cattle and Americans, use up piggish amounts of water, grain and crop land.

But the problem really isn't meat, but too much meat -- over-grazing, over-fishing and over-consumption. If Americans just ate less meat -- like driving cars less often -- the problem could be alleviated without giving up meat entirely. That approach has worked for centuries, and continues to work in Europe.

All my deep vegetarian questioning was silenced one day when a friend ordered roasted rosemary chicken for two. I thought I'd try "just a bite," and then I was ripping into it like a starving hyena. Roasted chicken, I realized, is wonderful. Meat is good.

From a culinary point of view, that's obvious. Consider that most vegetarians live in America and England, places tourists do not visit for the food. You don't find vegetarians in France, and rarely in Italy. Enough said.

As for health, if nutritionists are always telling you to "listen to your body," mine was definitely shouting for more meat. One roasted bird unleashed 15 years' worth of cravings. All of a sudden I felt like I had a bass note playing in my body to balance out all those soprano carbohydrates. Forget about winning the low-cholesterol Olympics. For the first time in a long time, I felt satisfied.

As a vegetarian, not only had I denied myself something I truly enjoyed, I had been anti-social. How many times had I made a hostess uncomfortable by refusing the main course at a dinner party, lamely saying I'd "eat around it"? How often did my vegetarianism cause other people to go to extra trouble to make something special for me to eat, and why did it never occur to me that that was selfish? How about the time, in a small town in Italy, when the chef had presented me with a plate of very special local sausage, since I was the American guest -- and I had refused it, to the mortification of my Italian friends? Or when a then-boyfriend, standing in the meat section of the grocery store, forlornly told a friend, "If only I had a girlfriend who ate meat"? If eating is a socially conscious act, you have to be conscious of the society of your fellow homo sapiens along with the animals. And we humans, as it happens, are omnivores.