Weaving kitsch, honesty and lather, sex in Japan is as complex as the country itself. 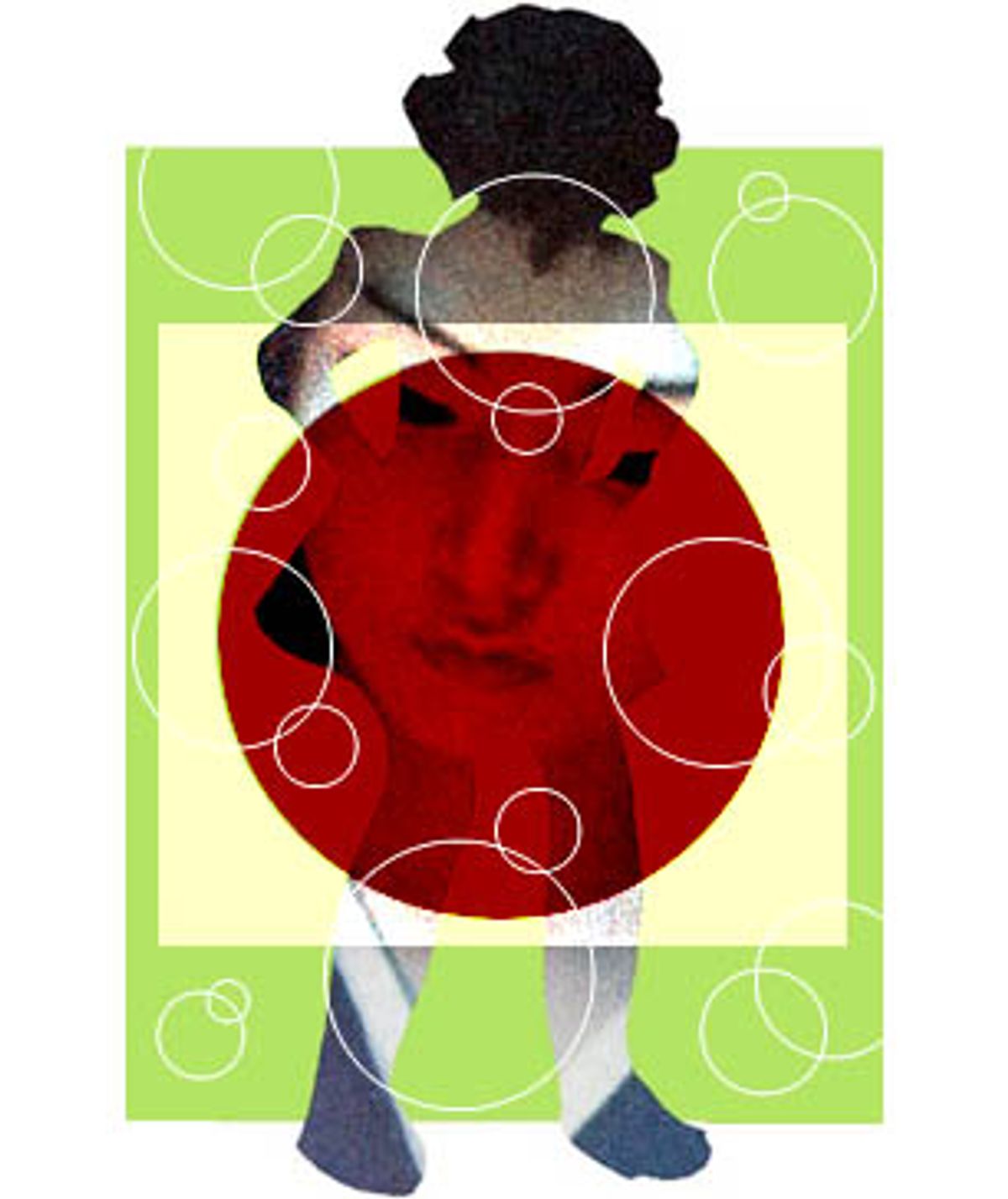 In land-deprived Japan, where physical space is always intimate, the ancient and the futuristic commingle in the streets: I pass geishas toting cell phones, kimono-clad ladies bowing to ATMs, temples with video-screen tour guides. Sex is an acknowledged urge in this land of convenience, serviced by an industry of myriad manifestations. It's primeval meets postmodern, with no room for the puritanical.

Just after dusk (and earlier on weekends), men in lean black suits and women in latex minis people the neon arteries near Japan's train stations. They aggressively solicit clients from packs of beery businessmen (whispering "sexy, sexy") and enlist young women for work by grabbing them hard round the shoulder, "inviting" them for a chat.

They hand out condom packets, half-price discount tickets for services topless or nude. They tote signs displaying cartoon drawings of nymphets with enormous breasts and wayward skirts, often clothed in schoolgirl attire, listing the ages of their staff. They tell the men about well-earned pleasures and the women about easy money, filling their heads with dancing visions of Prada bags and holidays overseas.

To understand anything in Japan, you must know about tatemae and honne. The former indicates the embarrassment-saving rituals of the public sphere -- the deferential bowing, the litany of apologies and the polite banter of mutually assured repression. The latter is loosely defined as your true feelings as an individual, mysterious sensations and impulses and desires that are reserved for private domains. In a land smaller and less habitable than California but with a population half that of the combined United States, the strict codification of public and private space is no minor concern.

Last year, for example, at the peak of the globally syndicated series about the president and his intern, I sat alongside a 50-ish Japanese linguistics professor at a sake bar in Osaka. We watched Bill Clinton's clown-nosed face on the screen and nodded at one another.

"Why does America embarrass itself?" the professor asked me.

"Sex," I replied. "America is confused about sex and love. We talk about it a lot."

He nodded: "In Japan, maybe he would be fired or he would resign, but the worst thing would be this news everywhere." He shook his head: "Here, no one would talk about it to the rest of the world."

Sex happens and is talked about almost exclusively in the sphere of honne. On the face of it, and certainly amid the then-depressing din of White House hysteria, this lends an admirable air of dignity to the daily dance between spirit and flesh. But finding where the lines are drawn can mystify a Westerner, to whom Japan might seem at once both a pleasure dome of guilt-free perversions and a hyper-prim, overpopulated dystopia of plastics and pollutants.

The uniformly blue-suited businessmen who frustrate foreign counterparts with elaborately formal agreements that amount to elaborately polite evasions (or outright lies) sit in overstuffed subways, riffling through newspapers featuring half-naked women and manga (comic books) displaying graphic sex and violence. They appear unconcerned with the eyes of fellow commuters pressing over their shoulders and elbows.

The office ladies, secretaries and elevator-operators greet their bosses and customers in pristine white gloves and high-collared suits, their hair tied back into tight ribbons. But later that night, they don neon micro-minis and breast-clinging halter tops as they gyrate in nightclubs or rendezvous in "love hotels." Context, in other words, is everything.

Even so, what's tolerated with little fuss or moral hand-wringing in Japan remains striking. Hiro Fujiwara, a man in his 30s who helped produce pornographic videos before manning his parents' noodle stand in an Osaka neighborhood, tells me that "pornography is sort of seen as a good outlet for men, a sign of a healthy man, like drinking a lot of alcohol." His friend, Kazuyo, a woman in her mid-20s, concurs, adding that "women don't mind so much because it means the man is normal. He watches when he is alone."

And this is how many Japanese men live. Habitually sent away from their families for years at a time by their company heads, Japanese men often have more intimate relations with their colleagues and the hostesses/mistresses who serve them than they do with their wives or children. Amid the boom of the nation's post-war economy, the corporation replaced the family.

"And even if they do go home," says Kazuyo, referring to legions of distant dads, "they don't really stay there. My father goes out after work and stays out, or he comes home late and goes to his room." (Married Japanese traditionally sleep in separate beds.) "He doesn't really know us. On weekends he plays golf."

That older men lust after younger women, and sometimes girls, is news to no one. But in Japan the fetish is so entrenched that there's a term for it: Enjo Kosai translates as "a supportive association or exchange" and means, according to 24-year-old Saeko: "He supports her lifestyle, she supports his ego."

A newspaper survey reports that 1 in 20 high school girls are involved in Enjo Kosai, and since poll respondents in Japan tend to reply with more discretion than those in America, it is generally assumed that the results err on the conservative side.

Some actual schoolgirls hitch up their skirts to further expose their thighs and more on stairwells and escalators. Men might approach them discreetly after school or through a third party who would set up the "exchange."

"The girls get money, sometimes gifts, you know, material stuff," says Saeko, who spent five years in Australia and is now applying to graduate schools in California. "They might have a high school boyfriend, but a lot of them aren't interested in high school boys. Japanese boys their age are too young or wimpy or just, like, nerds."

"The Japanese approach to sex is mechanical and morbid," says Sylvia, an Italian expat who has lived in Kyoto for three years. "Especially for the men, who have an inferiority complex. They can't handle real women so they act like perverts." She cites office harassment, the subway-groping epidemic that has only recently gained media attention and the proliferation of rape fantasies on video, television and in cartoons. "The women won't say anything because of shame. Then the men go down to Thailand and act like sex maniacs."

I mention the rumored development of touch-sensitive "sexbots" made from some kind of cyber-skin, molded to teenage proportions with implants of human hair. Said to moan on contact, they are engineered by the same Kyoto technicians who introduced the bestselling artificial pets that feed, expel waste and mimic certain human emotions in their computer-chip hearts.

Sylvia makes a vomit gesture. "Just like those love hotels -- can you believe it? You pay money for a few hours of just sex. It's so ... mechanical," she repeats.

Love hotels are Japan's fertility chambers -- gaudy temples to Eros in the post-war era of rampant overcrowding. Designed to make copulation private, discreet and desirable in a land where several generations once shared the same tiny space, love hotels have evolved into a multibillion-dollar industry that is part-kitsch, part-cool. Twenty to 50 bucks will buy a two-hour stay at "rest" rates; after 10 p.m. prices rise to $100 or $200, with an early-morning check-out.

The buildings themselves resemble castles, mansions, palaces, even cruise ships, all bathed in neon. The theme-oriented rooms (anything from S&M to tropical island) are immaculate -- a far cry from the notorious fleabags of American one-night stands. Driveways are shielded behind curtains, license plates blocked by clip-on devices. The customer feeds his bills into a computerized slot and chooses a room by pressing a back-lit panel. He never sees anyone but his partner, and no one else sees him.

The woman who introduces me to Love Hotel Hill in Tokyo's Shibuya district, a 27-year-old actress named Marico, is neither morbid nor mechanical. Like most unmarried women her age, she still lives at home. Her nights out end here.

We choose a room called "Peach" and are offered a selection of erotic videos on digital TV. We sip the cheap champagne and
check out the bath and bouncy king-size bed, playing with its lighting control panel. There's a CD player with four speakers, a video camera, mirrors on the ceilings and walls and, of course, a massive karaoke machine. We look through the condoms and various oils and then settle into a deep Jacuzzi, gazing through the tinted window at lighted Ferris wheels along the bay, six-story Sony screens suspended in space and alluring soapland neons that blaze till dawn.

Behind its playful gaudiness, the love hotel is forthright and frank, designed by a culture that has learned to dignify space for intimacy. I feel unreasonably secure -- as if this evening's romance were meant to happen, were sane and decent and even ... fun. We can watch each other shower through glass walls, we can tan together in adjacent beds. What a concept! To set aside a respectable, well-appointed and affordable space for physical affection; to lay out the gadgets without pretense or seediness. It's kitsch and cool and honest at once. If capitalism is going to get sexy, this is one way to do it.