"Girl With a Pearl Earring" by Tracy Chevalier, "The Music Lesson" by Katharine Weber and "Girl in Hyacinth Blue" by Susan Vreeland

Three recent novels shimmer with the sensuousness of Vermeer, the painter who inspired them. 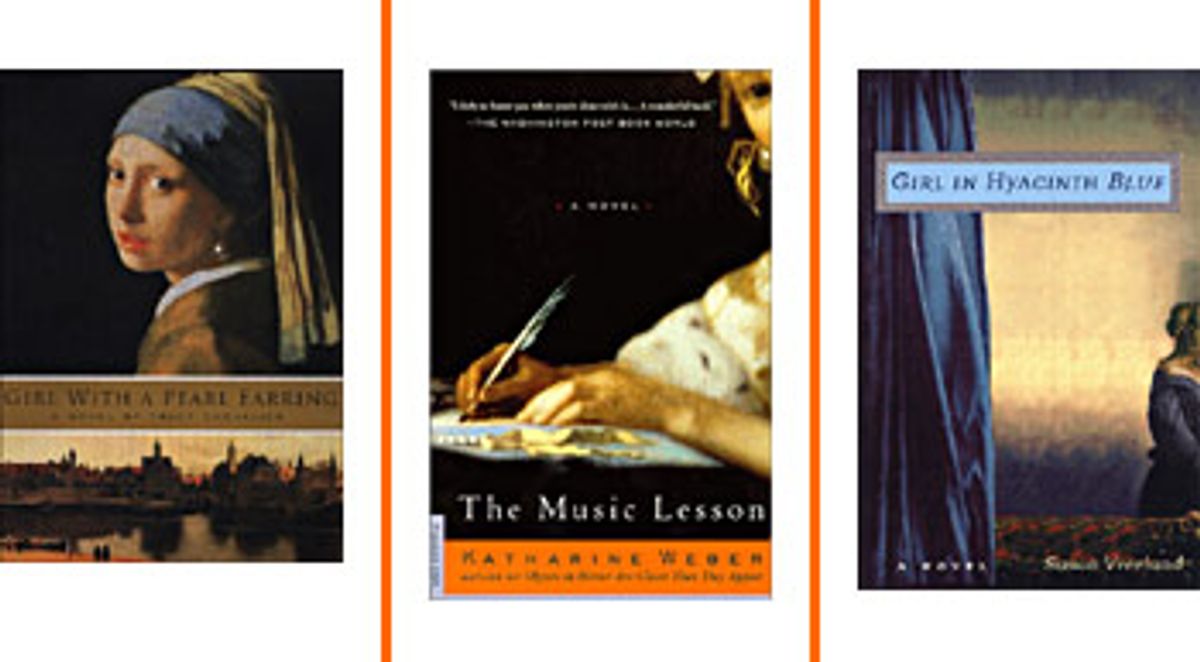 "It is the peculiar genius of the Dutch to seem, at the same time, familiar and incomprehensible," Simon Schama wrote in "The Embarrassment of Riches," his cornucopia-like 1987 study of Holland's Golden Age. And it is precisely the uncanny quality of Johannes Vermeer's paintings -- their arresting, prosaic sensuousness combined with what one scholar has called their "spectral sense of mood" -- that permeates three wonderful recent novels: Tracy Chevalier's "Girl With a Pearl Earring," Katharine Weber's "The Music Lesson" and Susan Vreeland's "Girl in Hyacinth Blue." They join the new Louis Andriessen/Peter Greenaway opera "Writing to Vermeer" (due to travel to New York from Amsterdam this summer) as the latest fruits of the Vermeer mania that seems to have gripped the world since the 1995 mega-show of the artist's works in Washington and the Hague.

Griet, the title character of Chevalier's "Girl With a Pearl Earring," puts her finger on Vermeer's uniqueness as she mentally defends his latest work against the envious sniping of her father, a former tile painter. "It may not have told a story," she reflects, "but it was still a painting you could not stop looking at." Chevalier's novel is the newest of the three and the only one that treats the artist's life and times (he lived from 1632 to 1675) at length; and it is a wondrous, enthralling piece of work, told through the eyes of a 16-year-old girl who goes to work as a maid in Vermeer's household after her father is blinded in a kiln explosion.

Like Vermeer's paintings, "Girl with a Pearl Earring" is deceptively simple, its events recounted in a matter-of-fact language that belies the novel's immense ambition and sophistication. Its narration, after all, enacts a hoch feminist maneuver: relating a monumental event (in this case, the genesis of one of Vermeer's most unsettling masterpieces) from the perspective of a "marginal" participant (a woman, of course -- here, Vermeer's poor, reluctant model), thereby rewriting history from the point of view of the voiceless and oppressed.

But whatever its agenda, Chevalier's novel sings with the freshness and the thoroughly intoxicating sense of a specific time, place and personality that I have encountered in only one other recent novel: Diane Johnson's "Le Divorce," a very different first-person account of a young woman's rite of passage far from home. In Griet's case, the physical distance is not so great, but the cultural and psychological gulfs are daunting. She has been uprooted from Delft's Rietveld Canal to "Papists' Corner" in the city's Oude Langendijck, and from an industrious, salt-of-the-earth Protestant family to Vermeer's chaotic Catholic household, teeming with children, burdened with debts and soured by the malice of Catharina, the painter's dull but beautiful wife, and of their vindictive little daughter Cornelia. Stealth and jealousy seem as palpable here as the honeyed light in the master's paintings; so do the prerogatives of prestige and class.

Complicating things further is the favor the painter shows Griet from their very first meeting in her family's kitchen, when he admires her artful arrangement of cut vegetables for the daily soup. Griet eventually earns the unheard-of privilege of working at the artist's side and mixing his colors, and she reluctantly models for him, wearing his wife's pearl earrings, after a wealthy patron takes a fancy to her. Here again, Chevalier considers the reality of a young woman's life in 17th century Delft from a modern perspective, though without disturbing the almost claustrophobic illusion of authenticity she so meticulously crafts. The rapacious male gaze permeates the novel no less than the spite of women, and it settles Griet's fate, as in her first meeting with her future husband: "His eyes came to rest on me like a butterfly on a flower and I could not keep from blushing  As I turned to go I caught the glance that passed between father and son. Even then I knew somehow what it meant, and what it would mean for me."

"Take care to remain yourself."

"That is not what I mean. The women in his paintings -- he traps them in his world. You can get lost there."

Shattered innocence also permeates Katharine Weber's "The Music Lesson," whose protagonist, art historian Patricia Dolan, comes at the end to a devastating realization: "I am an idiot. A naive idiot." In her early 40s, divorced following the accidental death of her young daughter, Patricia goes numbly through the motions as a research librarian at the Frick Collection until the arrival of her 25-year-old Irish cousin, Mickey, with whom she falls madly, obsessively in love.

Less obviously "about" Vermeer than Chevalier's novel, "The Music Lesson" takes the form of Patricia's diary entries after Mickey seduces her into his plot to ransom a Vermeer on behalf of an IRA splinter group. They settle on a choice painting from "Betty Windsor's" collection, whose theft and smuggling Weber conveys in tense, breathtaking detail. Violence and treachery inevitably emerge, with Patricia feeling "deeply sick, hot, cold," at each revelation of duplicity. "Betrayal," she announces, "is a body blow to the soul."

Superbly stylish (Weber has an extraordinary ear for the varied cadences of Irish speech, and her writing about sex is refreshingly non-trivial and to the point), "The Music Lesson" is nonetheless a touch more didactic than "Girl With a Pearl Earring," laden as it is with quotations from Walter Benjamin and snippets of mass-market psychologizing: "Mickey was someone I had invented for my own needs ... He had invented me to suit himself." Yet it, too, addresses the vexing issues that simmer beneath the surface of beloved creations of the imagination, whether on wood panels or in flesh, with intelligence and panache.

Susan Vreeland's lovely "Girl in Hyacinth Blue" brings together an even more artfully constructed narrative -- a kind of Chinese box unfolding from the contemporary hiding-place of a painting attributed to Vermeer all the way back to the moment the work was conceived -- with subject matter that is, for the most part, achingly humble and quotidian. The novel starts off on a lofty note, with university professors debating issues of penance and redemption, and the confession of a former Nazi on his deathbed: "I only joined because of the opportunity to make lifelong friendships with people on the rise." Here, too, issues of lust and possession come to the fore, as the painting's owner furtively caresses his prize: "He stroked her neck and was surprised he could not grasp the tie string hanging from her cap. And then her shoulder, and he was astonished he could not feel its roundness ..."

The further back the narrative travels in time, the more simply human the issues under examination become -- and the more intricate the thematic counterpoint as the painting is variously bartered, stolen or given away. There are heartbreaking stories of a Jewish family in occupied Amsterdam, sacrificing their much-loved carrier pigeons and celebrating their last Passover together, and of a wild young woman burned as a witch in 18th century Delfzijl, her baby abandoned to the mercy of a poor but respectable family. The novel ends as Vermeer's daughter Magdalena returns home following an auction of her father's work, Vreeland's prose mirroring the shimmering, mesmerizing depth of the master's canvases:

She walked away slowly along a wet stone wall that shone iridescent, and the wetness of the street reflected back the blue of her best dress. Water spots appeared fast, turning the cerulean to deep ultramarine, Father's favorite blue. Light rain pricked the charcoal green canal water into delicate, dark lace, and she wondered if it had ever been painted just that way, or if the life of something as inconsequential as a water drop could be arrested and given to the world in painting, or if the world would care.

Magdalena thinks back to her portrait in the auction: "People ... would be that close to her ... a matter of a few arms' lengths, looking, looking, and they would never know her." Just as Vermeer's paintings speak so powerfully, nearly four centuries after their creation, of the mysteries of character and time and of the trifling details that make up a life, so do these three novels, haunted by the artist's ghostly presence, trouble the soul and engage the mind.