Slave labor in the statehouse

By Martha A. Ackmann 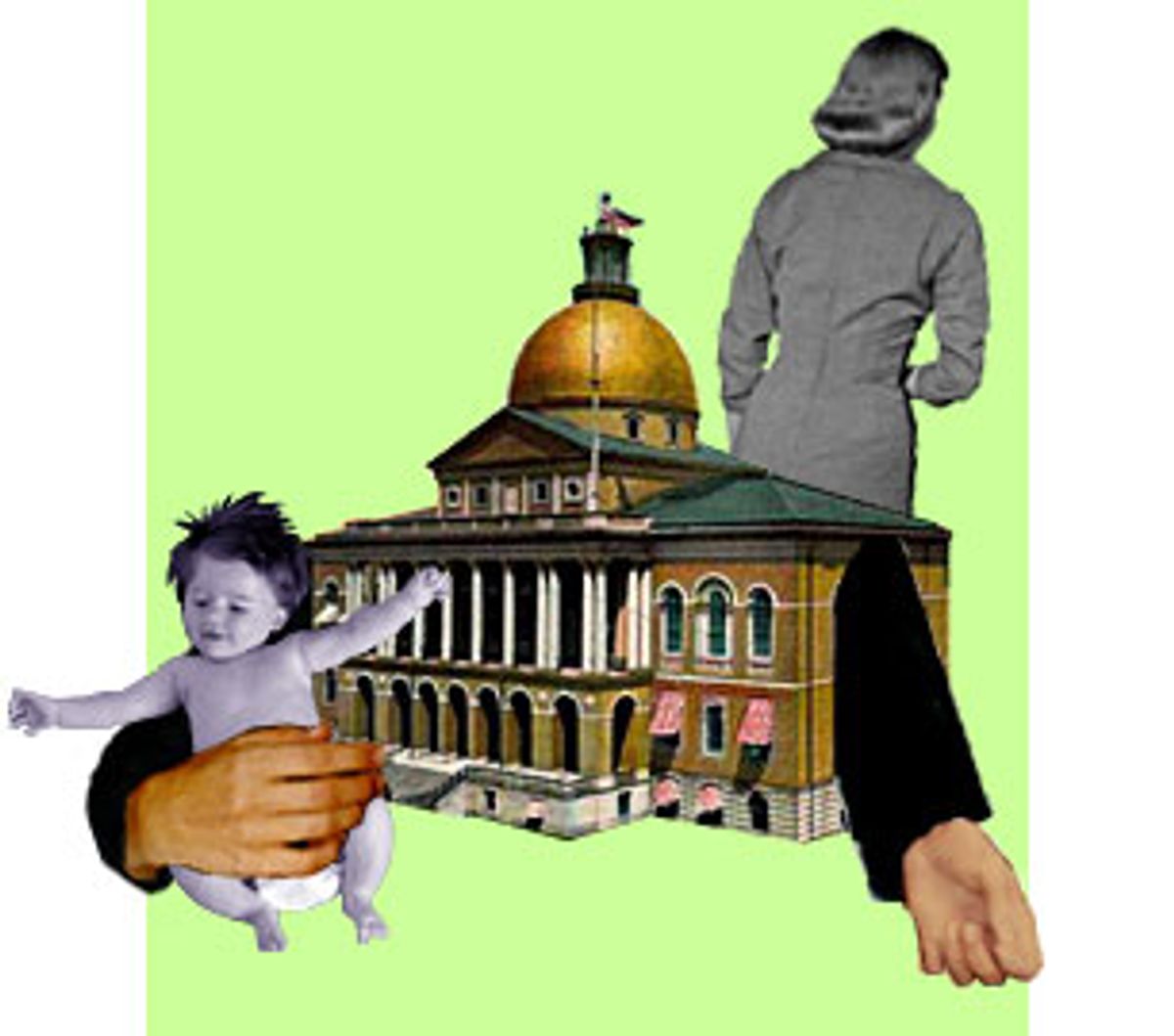 Massachusetts Lt. Gov. Jane Swift is in the news again. Remember Swift? A little over a year ago she garnered headlines across the country when she ran for office while pregnant with her now 14-month-old daughter.

For several months, pundits argued about whether Swift was doing the right thing heading down the campaign trail while in such a delicate condition. The public could have cared less. The "controversy" was a yawner on the street -- everyone had seen pregnant women at work before. If anything, Swift became something of a heroine for working mothers, whose lives are all about swollen ankles, a touch of nausea and the tyranny of office and family budgets.

Once again, motherhood has plunged Swift into the headlines. This time, though, Swift is unlikely to emerge as a heroine to anyone -- least of all working mothers. It seems that the lieutenant governor uses her statehouse staff for free baby-sitting and brings young Elizabeth to the office whenever family child-care crises hit.

In a story last week, the Boston Globe reported that Swift's staff members initially did not mind pitching in to help, but now, with many hours of baby-sitting under their belts, they are fed up -- and largely mum on the issue. "They're in no position to say no," one anonymous insider noted.

Swift has responded to the charges by appealing to her old pals -- frazzled parents. "I think anybody who were to walk in my shoes for a day would be most shocked to find out we are terribly normal and under a stream of the same pressures and concerns as every other working parent trying to combine work and family," she said.

This time, however, Swift's pitch has fallen flat.

We are terribly normal? Come on. She is the lieutenant governor of Massachusetts! Unlike your average mom, Swift relies on her considerable statewide power to get things done. Her problem is not "a stream of the same pressures and concerns" as other working parents, it is an alarming inability to distinguish between appropriate use of her clout and abuse of power.

Even working moms are not going to back Swift in her use of state office staff for baby-sitting during workdays and off-hours at her home. They are more likely to suggest, perhaps even demand, that Swift set up routine day care for her daughter or hire a baby sitter, paying him or her the going rate for such hard labor.

Then again, she may not need it. Swift's husband, stay-at-home dad Charles Hunt III, bowed out of his construction business to tend to the home fires when his wife got a job. And as luck would have it, a "family agreement" permits him to drop off the child at the Massachusetts Statehouse for Swift or others to watch on the days when he needs to exercise.

"I'm used to being outdoors more," says Hunt. So this handy agreement allows him to jog around the Public Gardens while the Commonwealth tends to his child-care needs.

Then there are those other errands Swift calls on her staff to do: retrieving dry cleaning, lugging packing boxes into her new home, driving the U-Haul to the new digs. (Staffers took paid vacation days to help with the move, insists Swift, who apparently believes that relocating your boss is more fun than a long vacation weekend on Cape Cod.)

What is more appalling: Swift's dubious ethical standards or her use of motherhood as a defense? Hard to say, really.

Massachusetts Gov. Paul Celluci sees nothing wrong with the whole business, calling Swift an "outstanding role model" for other mothers. Perhaps this is just his way of expressing how thrilled he is that Swift didn't come clean about the abuses, apologize and use the moment to promise her (and Celluci's) support for much-needed affordable and safe child care for the working parents of the state.

There is, of course, still time for Swift to come to her senses. If she is lucky, Massachusetts parents will cut her some slack, assuming that the stony response to her claims of being an authority on "normal" motherhood will teach her something about the lives of women who are not as fortunate as she is -- working mothers who can barely afford day care, those who can't afford to have one parent stay at home and the ones who don't have work environments that are as congenial to parents as Swift's appeared to be.

Who knows, maybe Swift will even become aware of the day-care workers in her state who earn less in one day caring for children than they would flipping burgers. And maybe, just maybe, she'll hire one.

By Martha A. Ackmann

MORE FROM Martha A. Ackmann