Where is the dyed-blond stoner chick in the '74 Cougar?

At the moment she's a paranoid mom with white supremacist neighbors. 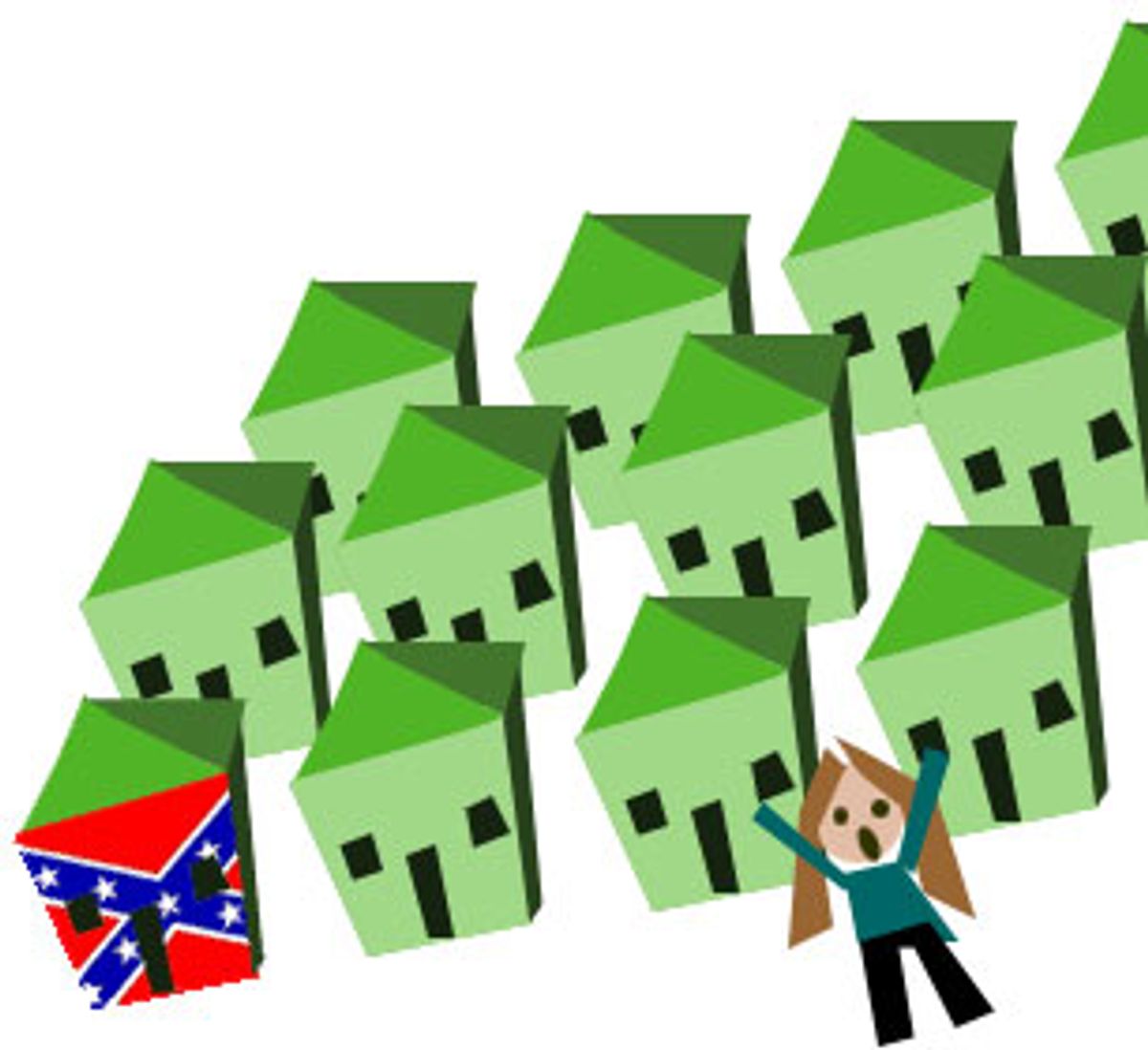 I used to be a fearless girl.

I left home at 16, took my driver's exam in the borrowed station wagon of a land surveyor who, in retrospect, had no business hanging out with a teenage girl, and bought myself a 1974 Cougar XR7 from Crazy Johnny's used car lot, not because it was reliable but because of its cushy leather interior, which could comfortably sleep two, and its affordable $200 down payment.

I can't count the number of times I visited sleazy yet charming boyfriends in the city jail, poking cigarettes through the tiny hole that had been gouged in the wooden frame beneath the Plexiglas window. I slept on the beach, served drinks in questionable bars and graduated from high school by the skin of my teeth.

Other girls had crushes on the likes of James Dean, but I think I wanted to be James Dean. I may have been a stupid girl, but I wasn't timid.

Sure, I straightened up and went to college before anything I did could go on my permanent record, but I still never developed any genuine fearfulness. I traveled alone in Latin America, rode the subway at all hours of the night and generally misbehaved in public until I married my wonderful husband and became a slightly more model citizen.

My adult adventures have been much tamer than my juvenile exploits, but that's more the result of having to get up in the morning for work than any kind of worries about safety on my part.

Even the birth of my first kid didn't faze me much. I didn't feel anything irrational beyond the normal overwhelming mix of tender emotions and mama bear protectiveness. I was never frightened or worried that he'd get bit by that little thug in his preschool, and after it happened I was blinded with anger, not with fear for his safety.

Even the six surgical procedures he required in one year (all minor, but nerve-wracking nonetheless) failed to send me into a tailspin of panic or worry. Generally, I was a paragon of mommy cool. You name it, I could cope with it.

Then I moved to a lovely Northern California neighborhood that looks just like heaven. Instead of tasteless new construction and master-planned communities, we found a sycamore-lined block of bungalows built in the 1920s. We now live within walking distance of a restored downtown shopping area with antique shops, independent bookstores and coffee houses, and a farmer's market every Saturday -- a little slice of Brooklyn Heights out here in the land of electric leaf blowers and SUVs.

But there's a dark undercurrent to life out here. My car was broken into in the middle of the night during our first month in California. All they took was a Kenneth Cole diaper bag. It was the only designer item I've ever owned and a gift from a fabulous New York girlfriend. Frivolous as that may seem, I'd been violated, right here in lovely, pleasant, smiling suburbia. (What annoys me the most about this is that no thief in their right mind would keep a diaper bag -- they almost certainly tossed it into a ditch after finding not a laptop or wallet but a few Pampers and a ketchup-stained Onesie.)

More worrisome than the minor theft, however, is the fact that our house is two doors down from a skinhead hangout, populated by bald, jackbooted kids and decorated with swastikas on the wall and white supremacist literature in the yard. Three of these Nazi wannabes are now in jail for firebombing the house of another neighbor who they believed to be Jewish. (He's Catholic, but that's hardly the point.) Granted, they're kids who were too dumb to look up how to build a good bomb, not a cult of educated, adult hate-mongers, but they're still a lot bigger than I am.

I lived for years in dicey neighborhoods that hadn't yet been gentrified, and never experienced anything worse than neighbors in a drunken brawl. Now I live in the city with the lowest crime rate in the country (for its population) and I'm not only the victim of petty crime but in the same zip code as active neo-Nazis?

We've all known that the suburbs aren't exempt from dark forces and violent crime. We've seen it in the movies, from the pure malevolence behind the picket fences of "Blue Velvet" to the lost dreams of youth in "American Beauty." More to the point, we know the tragic misfortunes of the Klaas, Walsh and Ramsey families. We get on with our lives without being paralyzed by fear, usually by saying "Well, it's statistically unlikely that it could ever happen here."

But the relatively minor incidents of the past few weeks show that it can indeed happen here, and at this point, it's all I can do to keep from escalating these small events into an excuse for full-blown paranoia.

I was never too worried about keeping myself safe, but now I'm almost irrational about how to keep my kid out of harm's way. Last month I panicked: Should I keep the Chanukah decorations inside, out of sight, instead of in the window with the tree as our bi-religious household has always done? I don't care what anyone thinks, but hell, we've got skinheads down the block.

The problem is once you start worrying, it's hard to stop. Before you know it, a reasonable concern grows unchecked into larger, unfocused fear. For instance, my kid's room is in the front of the house, with windows right on the porch. If I keep his windows closed at night, he'll stifle. But if his windows are open, isn't that an invitation? (Don't ask me "An invitation to what?" I told you at the beginning that I know I'm not rational.)

And don't even get me started about moving cross-country into earthquake territory. How irresponsible is it to drive my kid on a freeway overpass when it could collapse in a matter of seconds?

Some of my friends think this uncharacteristic nervousness is a symptom of some burgeoning clinical depression. After all, I just moved halfway across the country and I'm unemployed for the first time in years. I'm home by myself for much of the day, and I'm pregnant. Could be that my raging hormones have distorted my perceptions as well as my belly. Perhaps it's no wonder that I'm rapidly becoming crazy as a loon.

So I'm trying to balance my fears with actions that address the problems without making me look like I've gone nuts. I'm not getting a car alarm, since I actually want to become friends with my neighbors, but I will park my car in the garage on the weekends and hide the new diaper bag (sadly, not another Kenneth Cole) under the seat.

I'm putting nails in the window frames of my son's room so that a breeze can get in but the phantom toddler kidnappers are kept out. And as far as the earthquake scenario is concerned, I have convinced myself that if the house has made it for 70 years without falling down in an earthquake, then we're probably in pretty good shape.

People who knew the dyed-blond stoner chick in high school or the redheaded single gal in her 20s would certainly be shocked to hear that I'm frightened of anything, much less the pedestrian suburban mommy fears that are now taking up my time. Frankly, I can't really believe it myself.

I have to assume that this uncharacteristic panic attack will disappear as mysteriously as it appeared, and I will be drinking tequila shots and riding the subway at all hours again by the time the kids are out of the house.

Check back in a few decades and we'll see how I'm doing.

Elissa Keeler Miller is a freelance writer who lives in a quiet, though terrifying hamlet, south of San Francisco.