"Seeing Through Places: Reflections on Geography and Identity" by Mary Gordon

"Seeing Through Places" by Mary Gordon: The author excavates the houses of her youth in search of answers to her adult dilemmas. 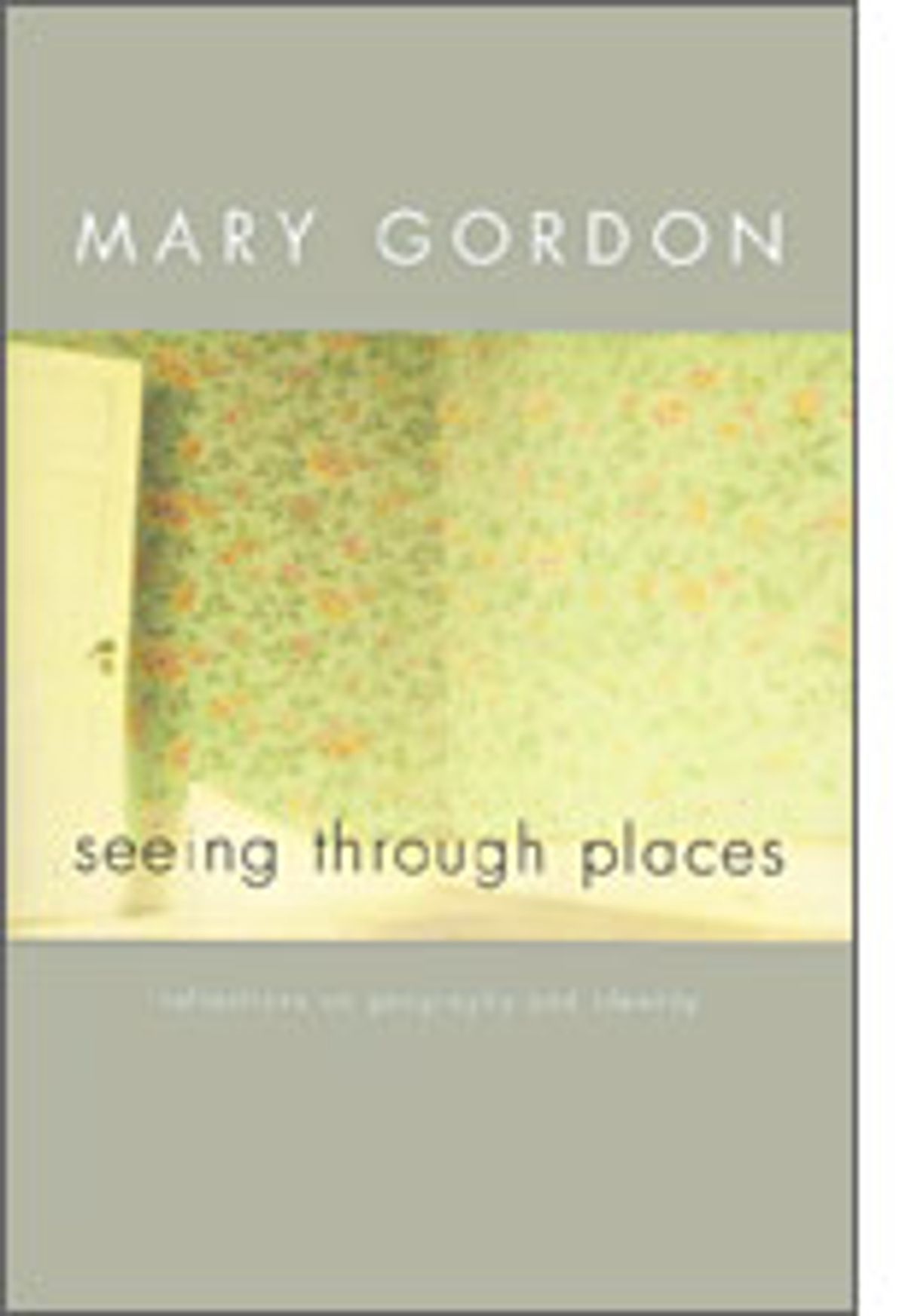 When Mary Gordon was a child, she tells us in her new collection of essays,
her grandmother lived in a bleak, punishing Long Island house, with its
own unwieldy vocabulary ("'commode' for toilet, 'box' for the area of the
floor where the dog was made to lie") and a precise, Old World geography. Objects had proper places and pedigrees, and pleasure was unwelcome: "Her house was her body, and
like her body, was honorable, daunting, reassuring, defended, castigating,
harsh, embellished, dark." Gordon moved into the house when she was 7,
after her father's first heart attack, and according to "Seeing Through
Places: Reflections on Geography and Identity," it cast a shadow on the
rest of her life. It is the house itself, Gordon suggests, that caused the rift between her mother and her aunt, and later propelled Gordon's own escape to the "impromptu ease" of be-ins in Central Park.

"Seeing Through Places" attempts to trace lines such as these between past
and present, between the physical geography of her youth and her adult
emotional maps. And many of the essays do offer evocative slices of an
era gone by and raise valid questions about our complex relationships to
the physical world around us. Gordon reflects interestingly, for example,
on her failure to conjure a mental image of her childhood church:

Why is it that I have much clearer memories of Immaculate
Conception Church and of Father L.'s office than I have of our parish
church? I know that it was torn down some time before my father's death,
that is, before I was seven, but I have memories only of some objects that
adorned it -- ironwork, holy water fonts, bowls screwed to the wall with a
cross their only ornament -- and the poor box, with its slot and iron
lettering FOR THE POOR ... There should be a catalogue of forgetting,
simply a list of names which carry with them no images.

But the volume's underlying premise -- that places as much as people shape
our lives -- is a hard sell. Was it the rigid lines of Gordon's grandmother's
house that created a young writer who allowed herself to be browbeaten by
an interview subject -- or was it the series of fierce authority figures
who had populated her early life? Exactly what effect did the city of
Rome have on the fearful young woman, and what landscape or
architecture was it that changed her into the confident, disciplined adult
who sits down at dawn each morning to sip coffee and write in her Cape Cod
vacation house? Part of the problem is that while Gordon's adolescence
is vividly drawn, her adulthood seems less clearly outlined; consequently,
it remains a bit of a mystery how the environment of her youth created the
adult we only glimpse.

Still, if Gordon fails to answer all her own questions, she does at least
inspire you to ask similar ones -- as I read, I found myself mentally
pacing the hallway of my own childhood home, trying to draw the lines of
my own history. And in fact, Gordon seems to recognize her own failure to
clearly tie these landscapes to her own emotional geographies. After
filling her map with monasteries, cloisters and cathedrals, she ends the
book with what sounds like a confession: "How can I say anything," she
writes, "except, 'Now I am here.'"