Two women and a monk

On an innocent afternoon in Kumbum Monastery, we choked down yak cheese and learned about Paradise. 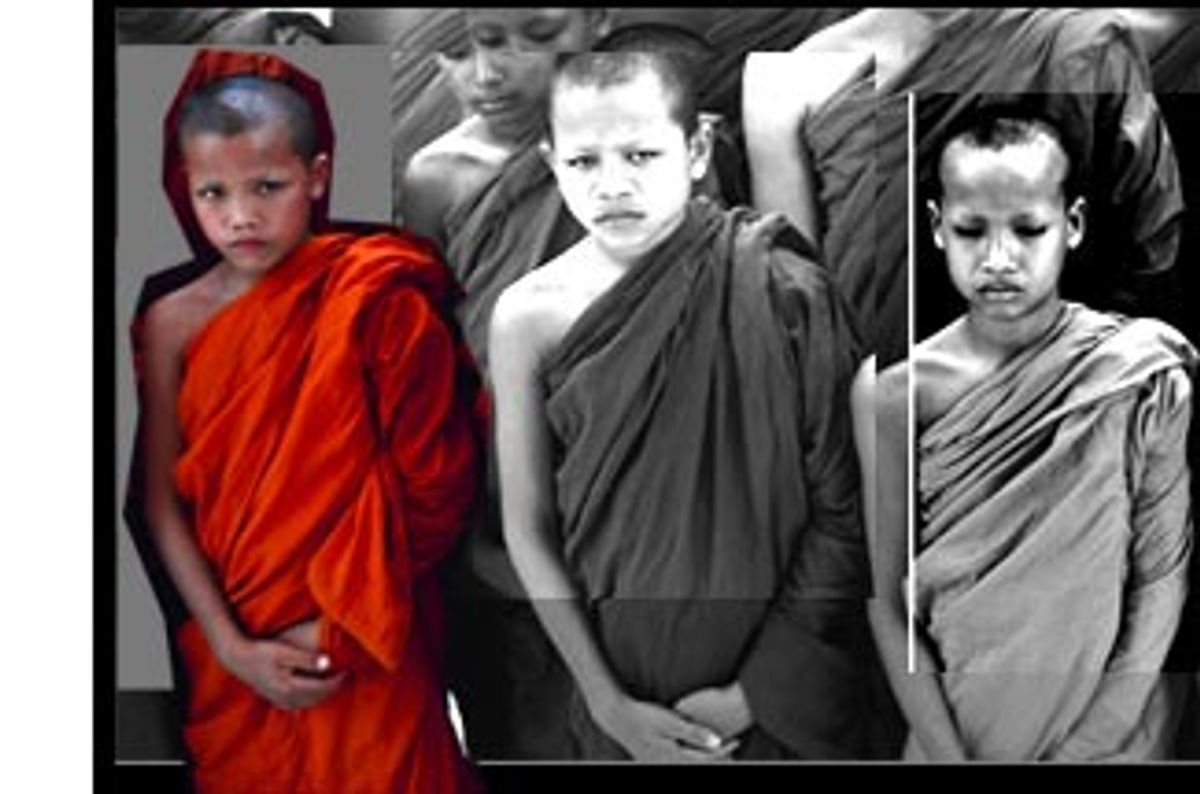 Kelly and I perched uncomfortably on the monk's bed, beneath a calendar depicting a deep-blue swimming pool fringed with palm trees. The monk had been absent for quite some time. Through the flimsy curtains, which were drawn across a small window at the head of the bed, we could make out the faces of young monks staring in at us. Finally the monk reappeared. "You like rice?" he asked. We said yes.

Kumbum Monastery lies curled up in the hills outside Xining, on the border of the Tibetan plateau in central China. Kelly and I had peeled ourselves out of a minibus that morning, trying to look inconspicuous as we poked about the monastery grounds.

Kumbum is practically a self-contained city, with temples, halls and living quarters spread out over 400,000 square meters of hilltop. The population consists of half magenta-robed, bare-headed monks and half khaki-covered, broad-brimmed-hat-wearing tourists. Most of the monastery's visitors are Chinese, so the monks, like most Xining residents, were amazed at the sight of foreigners. As we wandered through the monastery grounds, shorn heads periodically poked out of random windows, like monkish Jack-in-the-boxes, calling out "Hello!" or, if they wanted to show off a bit, "Good afternoon!"

A youngish monk from Mongolia, who spoke a bit of English, took a shine to Kelly and decided to show us around the monastery. His guided tour provided the following information: "This -- Tibetan book" (pronounced "boo-ha"). "This Dalai Lama. This Panchen Lama. This -- Buddha." The answer to most of our questions somehow turned out to be "Six."

Still, this was a good deal more information than we would have garnered from the signs posted at each site, which were entirely in Chinese. One particularly beautiful wooden structure, we learned, was the house where the Dalai Lama stayed when he came to visit. Our guide's own house, as he explained to us a little sadly, was not quite so large.

The sun beat down on the exposed hilltop, and after we had seen our umpteenth boo-ha, Buddha and Lama, our monk -- who did not have a particularly ascetic build -- was sweating. I was wondering if he expected some form of payment for his services before we took our leave, but then he swiped his forehead with a corner of his magenta robe and asked us if we would like to see his house. Normally I do not accept such offers from strange gentlemen, but since he was a monk and all, we graciously agreed to accompany him home.

The monk's living quarters consisted mainly of one small room, dominated by a hard, high platform which must have been a bed. I found the lack of fluffy pillows and a soft mattress reassuring -- it made the presence of two women on a monk's bed only mildly inappropriate. Tired-looking, nameless paperback books lined the shelves above our heads. The adjoining room, which had a stove in it, was shared with another monk.

Our monk's name was Odzer, but his English name, which he wrote out for us very carefully on a scrap of paper, was "JIMES." Odzer told us that he came to the monastery from Mongolia when he was 13, or possibly 6, I'm not too sure. Entering a monastery seemed to be much like entering college, except students learn Tibetan, no girls are around and there are very few parties.

Odzer's friend came to visit. He, too, was a monk but came dressed in jeans and a T-shirt. Despite his minimal English and our non-existent Chinese, we held a mildly successful conversation in which we managed to explain where we were from, and also ascertained that Odzer's friend enjoyed boxing.

Odzer took out a bowl of some sort of grain, and asked
us if we would like to try Mongolian food. He added
hot water from a thermos, then a heap of white powder
from a plastic bag, and finally what I felt was an
overly generous portion of yak butter. The dish turned
out to be delicious, something like an extremely
crunchy version of Rice Krispies. Unfortunately, Odzer
insisted that we accompany this dish, called "ahm," with some
yak cheese -- a slab of hard, gray matter that could
be partitioned only with a hammer. I almost broke my
teeth on the stuff, while Kelly sturdily insisted to
our host that it tasted like Parmesan -- an optimistic
comparison, and probably a meaningless one for Odzer,
who laughed nervously.

Next he asked us if we would like to try Tibetan food -- tsampa -- which I recognized as the name of a
Tibetan restaurant on East Ninth Street in New York. I
was envisioning a dream of a dish, a feather-light
dumpling or a sweet ambrosia whose name alone could
carry a trendy dining establishment. Tsampa, we
discovered, was in fact a ball of raw barley flour
mixed with hot water and yak butter. We were supposed
to take a bite out of the ball, which was the
approximate size and weight of a shot put, then
wash it down with a gulp of hot water. Odzer offered
to add some yak butter to our water, but we demurred.
"This no Mongolian food," said Odzer, as if this was
somehow to his credit. "Tibetan monk eat. No
Mongolian."

Young monks, eight years old or so, kept peering into the
window to catch a glimpse of the foreigners, or
perhaps to see someone act like they were enjoying
eating tsampa. If we caught them looking, they giggled
and ran away. If we didn't catch them looking, they
would yell "Hello!" until we noticed them, and then
giggle and run away. We chatted haltingly with Odzer,
who frequently left the room when he couldn't find the
word he wanted, and then re-entered after a brief
absence so we could restart the conversation at
another less sticky point. His absences also gave us a
chance to store uneaten chunks of tsampa in our
pockets.

At last the rice appeared, along with a plate of tofu
and some unfamiliar mixed vegetables, including a
fleshy, zucchini-like gourd and several leafy greens.
Odzer insisted he was not a good cook, but his was one
of the best meals I had in China. We sat and ate in
silence, while a teenage monk practiced his prayers
outside, occasionally interrupting his droning with
what must have been a muttered Tibetan curse, and
starting again.

After lunch Odzer took us on a hike around the hilly
perimeter of the monastery. We passed by an elderly
woman, poorly dressed, prostrating herself on the
ground. She wore pads on her knees and an additional
pair around her hands, like fingerless mittens. She
took a step, dove down into push-up position, extended
her arms all the way forward, slid up onto her knees
and then stood again. Odzer explained that these
pilgrims travel the entire hilltop circuit in this
manner, chanting prayers all the while. It took us,
walking fairly rapidly, almost an hour to complete the
trip, during which time we encountered four more
elderly pilgrims, all women, performing the same
penance. The monks merely make a point of stopping at
all the altars.

In the evening we helped Odzer with his English
homework. He wrote notes in the margins of his
textbook in Mongolian, a curling, vertical script.
Odzer spoke Chinese and Tibetan as well. Three times
a week, Odzer told us, he takes English lessons from
an American man in Xining. Odzer was very curious
about America. He had heard of New York City, but not
Texas, though he seemed amused by our rendition of
cowboys and Indians. He copied down our addresses and
we took his. Odzer knew a monk who had been to Canada
and he very much wanted to go there.

Usually Odzer was very shy about answering "Why" questions, and left the
room in embarrassment. But this time he did not
hesitate. "Because," he said, "it's like Paradise."

Shanti Menon worked as a reporter at Discover magazine for five years, then left last summer. She has been traveling and writing in Asia ever since.