As Havana waits for Castro's demise, even his enemies are appalled by the way Miami's Cuban exiles have used the motherless boy for their own political ends. 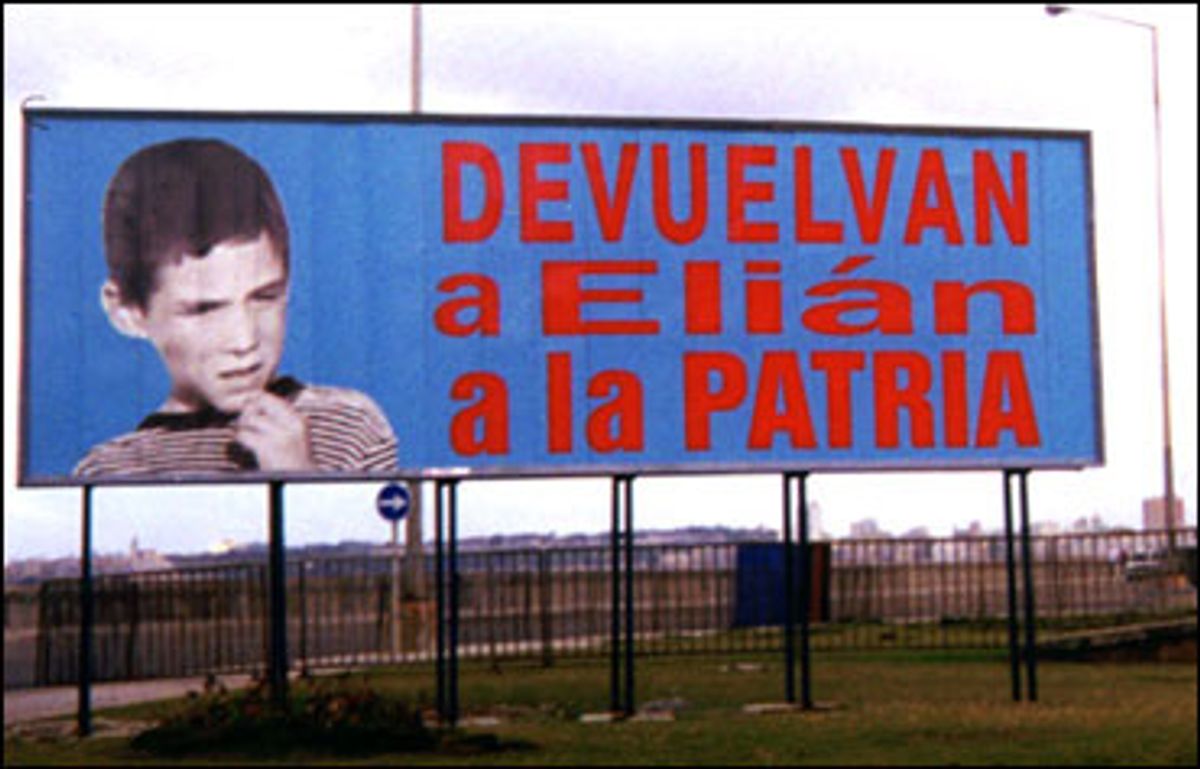 On the streets of Havana, the conflict over Elian Gonzalez is as much about golf courses, beach-front condos and luxury hotels as it is the fate of a boy who was rescued on Thanksgiving Day, clinging by one hand to an inner tube, just off the Florida coast.

A family feud of Shakespearean proportions, the custody struggle over Elian has been cloaked in terms of "what's best for the boy." But many people on both sides of the Florida straits also see it as a battle over who will control Cuba after Fidel Castro: the Cubans who remained in Cuba, or the Cuban-American community living in exile.

In a perverse twist of fate, Castro has outlasted the Soviet empire and nine U.S. presidents from Dwight Eisenhower to George Bush, but he is now being threatened by a 6-year-old boy. If Elian is allowed to remain in the United States it will be seen as his emasculation.

Like King Lear, an old man whose pride cost him everything, Castro is watching his "disloyal" children in Miami prepare to take over his kingdom. And now they've taken his beloved Cordelia, humiliating him on the world stage. The struggle over Elian is less about what is "best for the boy," but what is best for Castro, his Miami opponents, and the future of his native land.

So Elian is now a symbol: He's been slapped with a subpoena, become a catalyst for riots, bomb threats and work stoppages. Since fleeing Cuba in a rickety boat for a better life in America, he has lost his mother, the precious innocence of childhood and most poignantly, his name.

To the world he is now simply known as "the Cuban Boy" -- or sometimes, in tabloid headlines, just "Cuban Boy," making him sound like a freak-show attraction. It's hard to say which side has made more distorted political use of the boy, the power-mad Cuban American community, or Castro's repressive spin machine.

But on the streets of Havana, and in more moderate corners of Miami, too, it's clear the Cuban-Americans' excesses on "behalf" of Elian have alienated potential allies. "They're grasping for anything to get at [Fidel] Castro and it's backfired," said Max Castro, a Cuban-born senior research associate at the University of Miami's North-South Center. "It's the worse P.R. they could have done in Cuba and Latin America."

Apart from specializing in immigration and U.S.-Latin relations, Max Castro has a very strong personal connection with the case of Elian Gonzalez. At the age of 10, he was sent by his parents unaccompanied to live with relatives in the United States.

"I did not want to be separated from my parents," he recalls. "But it was 1961 and there was this mass hysteria in Cuba. People were saying their children would be sent to Russian camps and that they would lose them."

For years, Cubans have talked of "when Castro goes," and some sentimentally looked to the exiles to one day help them rebuild their country. But now these very people are beginning to look worse than Castro.

"This boy is about money," said Raul, a 22-year-old computer software student in Havana. "He sells newspapers, T-shirts and gives the Cubans in Miami the publicity they crave."

Raul, like many Cubans both pro and anti-Castro, is appalled by the brute force in which the Cuban American community has manipulated the boy. And the excess makes them fear for the future when the exiles return, as expected, after Castro's demise.

"I will be more enslaved to my own people than I am now," says Raul, a sentiment I heard many times in Havana in recent weeks. "These Cubans in Miami have a lot of power and money. Whenever they come back to Havana they are dripping in gold chains and they act like they are better than us."

"It's a struggle over Cuba," explains Max Castro. "The money is part of it, but it's also about passion, hatred and delusion. It's about revenge and reclaiming what they've lost. They want to show they were right."

In Havana, Cubans and foreign investors alike speak of Castro today as if he's already gone. The telltale signs are not in press releases from Washington or Havana, but in the web of scaffolding and construction cranes in the Cuban skies. In the past two years, scores of gleaming skyscrapers and glitzy hotels have been built by foreign capital pouring in from Spanish, Canadian, French and Italian investors.

Like the early days of the Internet, there's a frenzy to be first, even though no one is making a real profit. Perhaps more revealing, almost all of the new hotels are being built to American fire and safety codes, so they can one day be sold to the Ritz Carltons and Hiltons of the world. "We're all waiting for the Americans," conceded a Spanish developer.

Since the Pope's historic 1998 visit, U.S. officials in Havana concede, the country has become more porous. The sale of food and medicine to non-governmental agencies is now permitted, Clinton has eased travel restrictions and Castro is even flirting with private enterprise by allowing Cubans to open paladares, family-run, home-based restaurants.

The dollar is already the country's "real" currency. Images of Che Guevera compete with the face of Ernest Hemingway for tourist T-shirt dollars, but Papa wins, hands down. At the famed El Floridita, one of Hemingway's many watering holes, tourists pay about a third of the average Cuban's monthly income to sip one of his beloved daiquiris.

Ordinary Cubans seem happy about the influx of foreigners to their island. Certainly as a journalist reporting from the Eastern Bloc during its final days, I rarely witnessed such warmth. If you asked for a towel in a Moscow hotel, you were met with a scowl. In Havana, I returned to my hotel room each night to find a new "sculpture" by the maid on my bed. Sometimes she arranged my bath towels in the shape of a swan, or a heart or a sailboat.

When Kmart took over the state run department store Maj in Prague, some employees found the notion of customer service so repellent, they quit rather than have to smile at the customers. But the Cubans employed by Havana's growing tourist economy exude a warmth, and a desire to please that can't be faked.

While sampling a plate of traditional Cuban hors d'oeuvres, a waiter earnestly approached me to inquire which was the correct description; pork rinds or pork cracklings. I told him both were correct. But which sounds more "elegant" he implored. Not wanting to steer him down the 7-Eleven path, I ventured "cracklings?"

Still, Castro's disapproval is evident, though it cannot quite spoil the party. While well-dressed foreigners sip cocktails amid photos of Hemingway hob-knobbing with Spencer Tracy at the El Floridita, a prominently displayed poster declares that Cuba "blossoms" in spite of "the menaces and tight circle of the U.S. blockade." And in a humbling gesture to foreign investors, Castro's forces have slapped posters demanding "Return Elian to his school desk" on all new hotel construction sites.

Many developers are convinced Clinton has been laying the groundwork to lift the embargo before he leaves office, and might move quickly if not for U.S. politics.

"If he didn't have to sacrifice Gore, I think he'd do it right now," says Dick Zebo, a Florida-based tour operator and property developer who has deals with 27,000 hotel rooms in Cuba.

But politics figures front and center in the Clinton administration's deliberations over Elian's future, as well as the future of U.S. and Cuban relations. Abandoning their usual family values rhetoric, every Republican candidate has used the case to accuse Clinton of appeasing Castro. Even Al Gore has attempted to distance himself from the INS decision to return Elian to his father.

And U.S. diplomats in Havana are quick to dismiss hopes of lifting the embargo anytime soon. "We took a lot of hits for this embargo, we're not going to give up something for nothing," a senior government official said.

What will it take?

"How about free elections?" he said.

But in the case of Elian Gonzalez, the law is clear: Politics aside, the boy legally belongs with his father, Juan Miguel Gonzalez. If he had washed ashore from Haiti, he no doubt would have been put on the next plane home.

Instead, he has taken on mythological proportions. Some members of the Cuban-American community are casting him as a sort of Cuban messiah. In a recent edition of a Cuban exile magazine his photo appears above the caption, "A Cuban Moses."

The relatives who know what's best for him, the ones he's known for just a few weeks, haven't helped. Instead of shielding him from the media mobs, they trot him out before TV cameras like a circus animal in the most contrived appearances, nudging him to wave the subpoena above his head.

"I believe he's suffering from the Stockholm syndrome," Max Castro said. Indeed the boy has moved from one state of shock to another. Early video clips depicted a shy child with a blank, wide-eyed stare. Today his eyes have a giddy intoxication of a child who has OD'd on Elian mania.

Even the average American kid accustomed to material wealth would be overwhelmed by the media attention, meeting sports stars, getting puppies from politicians, going to a wave of parties and parades, and seeing his face on TV, billboards and magazine covers.

Being in Havana, it is hard to see it as the forced labor camp for kids that the Miami Cubans say it is. Granted, Cuba is an extremely poor country. Human rights activists, journalists and labor organizers are still the top government targets for repressive measures ranging from imprisonment to denial of housing and employment. But in spite of the heavy weight of Castro's totalitarian regime, this is not the grim Iron Curtain dystopia its critics depict.

No, Cuban children don't have Star Wars or Pokimon, but then, they don't have guns to shoot their teachers and classmates either. They have parents and grandparents who take them to the park and buy them ice cream cones. They walk hand in hand along the Malecon, Havana's spectacular sea wall. They play soccer and baseball on weekends.

Recalling the pain of his own separation, Max Castro believes Elian will only be able to grieve and heal from the trauma of losing his mother, Elisabeth Brotons, in a familiar setting, his own culture, speaking his own language amongst his real family -- his father and four grandparents.

For despite the many advantages of his upbringing in the United States, almost 40 years later Castro still regrets his sudden departure from Cuba. "I always wondered whether I would ever see my father again?" he recalls. It was two years before his father could join him in the United States.

The material comforts of a new life didn't ease the pain, he recalls. "It's where I grew up," Castro says. "It was my country and I was willing to stick it out for better or worse."

Cynthia Durcanin is the former editor of Elle.com in Paris. She now lives in San Francisco.