"Between Father and Son: Family Letters" by V.S. Naipaul

The correspondence of a naive and vulnerable youth whose famous bile hadn't yet started to rise. 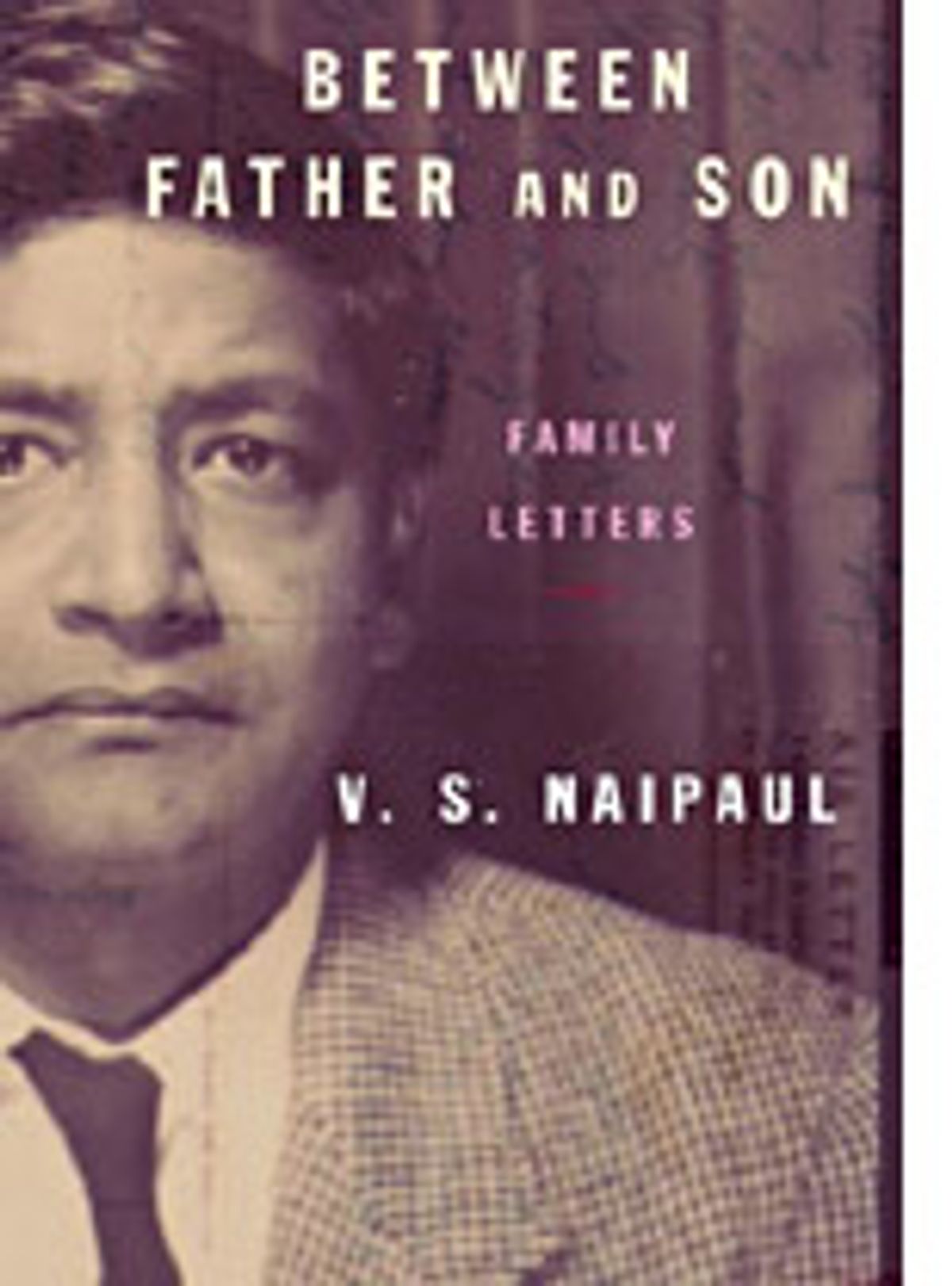 Few writers have offended their readers as regularly as V.S. Naipaul has. From his first travel book, which disparaged the West Indies as a "dot on the map" where "nothing was created," to his most recent, in which he dismissed Pakistan as a "criminal enterprise," the Trinidad-born author of Indian ancestry has shown a staggering capacity for insensitivity and prejudice. Africa is filled with "bow-and-arrow people." India is "an area of darkness." "V.S. Nightfall," Derek Walcott has called him; like a man who turns his back to the sun, Naipaul sees the world through his own shadow.

Traces of this imperiousness and biliousness are already evident in "Between Father and Son," a collection of Naipaul family letters covering the period from September 1949, shortly before the 17-year-old's departure on a government scholarship for Oxford, to the publication of his first novel, "The Mystic Masseur," eight years later. Naipaul finds the "bright young sparks at Oxford quite insipid," their "conversation and company tedious." Of a new acquaintance, he writes to his sister Kamla that "I hope he isn't homosexual. Nearly every other man one meets in this country is homosexual." Still a teenager, Naipaul displays a remarkable cocksureness. He is, he informs his sister, "the best man on the news staff" of a student paper, and "as usual, the hardest-working." In his second year, he produces a novel. "I am in no doubt about its being accepted," he writes home.

The book is rejected, and Naipaul sinks into a long depression -- a "nervous breakdown" as he later, in typically dramatic fashion, characterizes it. "A man isn't a block of wood," he writes morosely to his parents. "Some people, alas, feel more and think more than others, and they suffer." This suffering Naipaul -- "a jar of muddy water," he calls himself -- is not the inscrutable man of legend; he is a lonely, fragile and culturally awkward boy, unsure of his place in the world. Readers familiar with his work will turn to this book expecting the familiar cold detachment and the usual larger-than-life account of the writer's quest for artistic purity. But "Between Father and Son" is something quite different: a portrait of the artist as a human being.

We see a naive young man struggling for social acceptability as he worries about finding his "circle of friends." We see his fumbling, endearing advances toward women. (A Finn names her pet turtle after him; rather than sputter, Naipaul tamely throws up his hands and asks, "What could I do?") And we see his affection for his family. Salman Rushdie, reviewing Naipaul's masterly novel "The Enigma of Arrival" in 1987, famously observed that nowhere in that book could he find the word "love." Yet the Naipaul here who counsels his siblings on marriage and education is warm, affectionate and caring. Toward his beloved father, Seepersad (the inspiration for his 1961 Dickensian masterpiece, "A House for Mr. Biswas"), he is all emotion, admiration and encouragement for the older man's writerly ambitions. When, near the end of his time at Oxford, Seepersad dies, Naipaul is heartbroken. "HE WAS THE BEST MAN I KNEW," he cables home. "EVERYTHING I OWE TO HIM. BE BRAVE MY LOVES."

It is a sad and poignant moment -- and the book is filled with such moments. Perhaps the deepest impression these letters impart is of the hardship of Naipaul's life at Oxford. The cultural isolation, the desperate poverty, the strain of work and loneliness: Any young man might have come away with a gloomy disposition. "The world is what it is; men who are nothing, who allow themselves to become nothing, have no place in it," says Salim, the narrator of "A Bend in the River." To survive in the world, one sometimes needs to be a block of wood. "Between Father and Son" suggests that this is the lesson Naipaul learned at Oxford; it is a lesson he may have taken too much to heart.

Akash Kapur is a contributing editor at Transition magazine and co-host of Stop the Death Penalty, an online petition against capital punishment.