Cooking for pain, for loss, for heartache, for life. 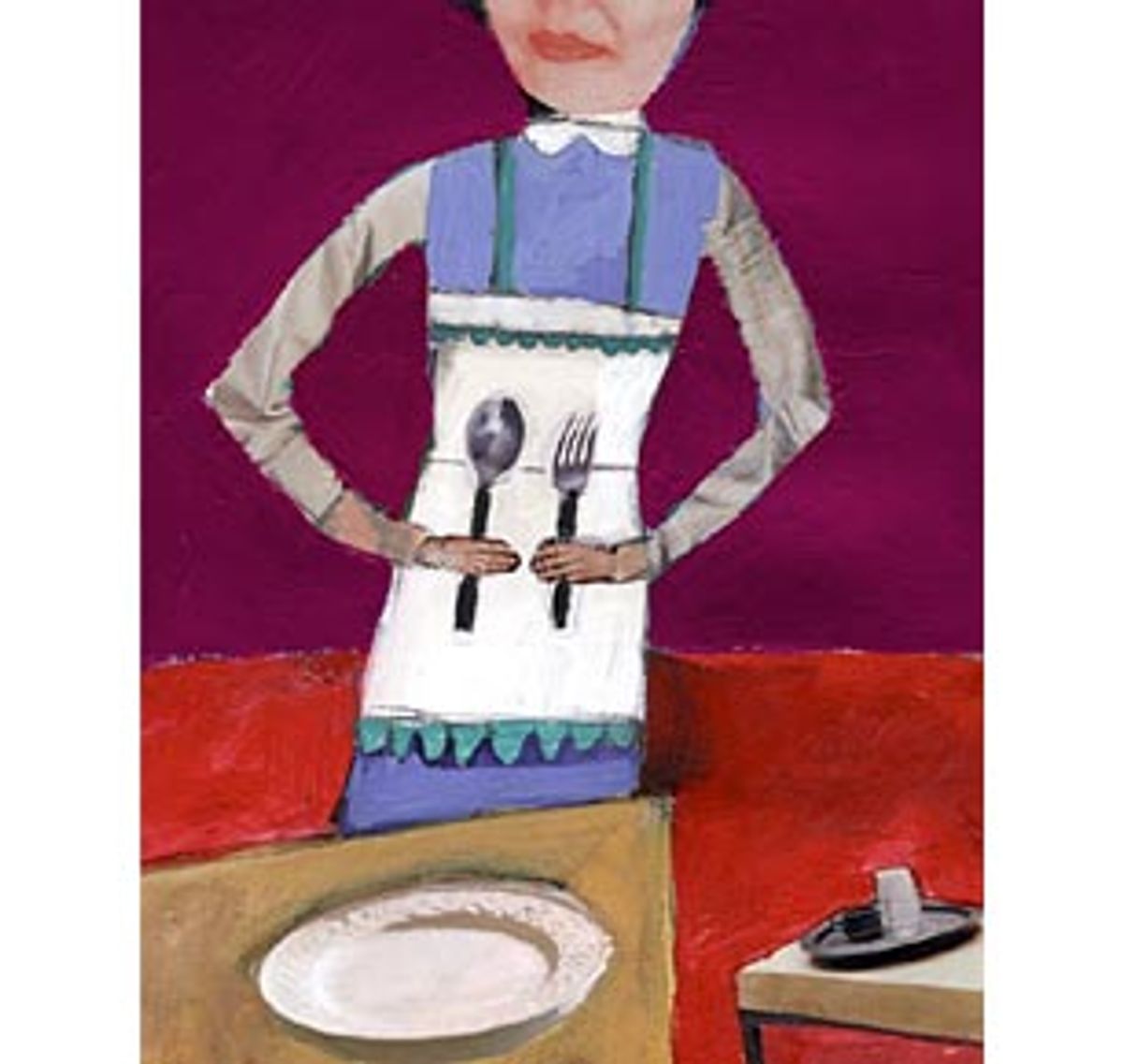 I will be peeling and cubing potatoes for a long time tonight, arranging them in large baking pans like Im cooking for a restaurant, but Ill be thinking about breast cancer, about illness and death and fear.

I will be cooking for an acquaintance from my daughters elementary school. I dont know her well, but we have talked in parking lots and at birthday parties for five years. She is a single mother, like me, and she works with disturbed and autistic children at school. This week, she will have surgery for breast cancer, followed by seven weeks of chemotherapy.

I will take her one dinner a week for two months. Its not a church assignment, or a pity assignment. Its life.

I'd always seen the phrase "company dinner" in magazines and newspaper cooking sections. My oldest daughter recently read the novel "Betsys Wedding," which Id read years ago, where the main character agonizes over developing her own company dinner. Every woman should have one meal that reflects her taste, her cooking, her life, right?

Somehow, my life and those of my friends and relatives have not included company dinners. For my friends and me, many of us single working mothers struggling to get by, company means all our kids playing in the yard and ordering pizza to eat outside. But as Ive grown older, I have discovered the keep-you-company dinner, the one that can be eaten right then or reheated when youre hungry or exhausted, the one someone brings you when you or someone in your family is ill or fading.

I love to cook, to make dinners big enough for many. I didnt grow up like this, because with three children, two foster kids and a husband, my mother cooked dinners that were just enough for us. No leftovers, few friends invited over to eat. But when I met my future husband at 14, and began visiting his house regularly at 16, I watched my mother-in-laws style of cooking for the multitudes.

She taught me to make a 20-pound baked ham, to cut up several chickens for barbecuing, to cook side dishes in those institutional-size baking pans that take up half a table. For holidays (including Super Bowl Sunday, a national holiday for my in-laws), we had 50 to 100 people in the kitchen, dining room, yard and the sidewalk. Each person held a plate heaped with food, and my mother-in-law smiled with pride and contentment.

Five years ago, when I was pregnant with my third child, my mother-in-law had a series of strokes, and in only two weeks, she was gone. It was not my first funeral, but my first time being a bereaved daughter-in-law. We cooked and cooked, for family while she was in the hospital, for visitors to the house, for everyone. I perfected my bring-to-potluck dish then, turning it into a heat-up-from-the-hospital dish. It was curried rice cooked with sausage and black beans  one of my mother-in-laws favorites.

Church women cooked for the reception after the service, but we daughters-in-law and female friends and relatives cooked for more solemn home gatherings, and then we cleaned the whole kitchen, our way of mourning.

A few days later, my neighbor Jeannines husband was killed in a car accident. They had met as teens, like my husband and me, and we had lived across the street from each other for seven years. Jeannine and I laughed and gossiped, and she had given me hand-me-down clothes, a used Barbie limousine (bright pink) and plenty of advice on strep throat and puberty and how to fit three girls in one room. Now she was a widow at 35, left to raise four kids while finishing nursing school.

All I could do was cook, and then I knew we were entering a phase in life I had wondered about: food as love, as caring, as commitment, as solace. I had to cook something my family and hers would eat, something I could make after work, and I had an old 1940s electric range with only two burners working.

But it had a double oven, the envy of all my friends who baked. I remembered a recipe for Mahogany Chicken, something about cream sherry and garlic, high heat to brown the skin. It was a dish I thought adults and kids would eat, even if their stomachs were upset from worry or illness or life.

And it worked, for Jeannine and me, because once I stuck it in the oven, we could help the kids with homework, do laundry or collapse. There was no vigil at the stove, stirring. And it wasn't a casserole, which sometimes kids hate because everythings mushed together. Jeannines kids, and mine, liked the separate chicken and potatoes.

I felt old when I first made four pans of my dinner dish and walked two, covered with foil, across the street. I felt old when Jeannines face mirrored mine, washed-out, sleepless, with lines around our mouths.

A month later, Aunt Sister, my husbands aunt, died of lung cancer. I baked the chicken and potatoes dish again and again, for months, it seemed. But we survived. Jeannine graduated from nursing school. That summer, I had my third daughter. And six months later, my husband moved out. The same month, I found out that the mother of a kindergarten classmate of my middle daughter, someone exactly my age, was struggling to take care of her husband, who was dying of a brain tumor.

I wouldnt have baked the chicken and potatoes for myself, but I baked some for Karis family and some for us. I made other things, too, once or twice a week delivering dinner. And during the year when her husband died and mine decided he wasnt coming back, we cooked together, ate together with our total of six children, and we used food to form a close friendship.

I baked the dinner in round smaller pans for another neighbor, Lorraine, who has breast cancer. Three years later, she is still struggling through more chemotherapy. (She calls it "The Red Devil" in her Arkansas accent.) She is in her 60s. And tonight, I will bake the dinner in the usual rectangular pans for Cathy, the school aide, who is in her 40s. Breast cancer, my daughters whisper in hushed tones, glancing at my own chest. Everyone has cancer. They are scared, nervous about me, even about their bodies.

What can I tell them, except to use food? "We dont know why people get cancer," I say, "but eating right is supposed to help prevent it. Broccoli, especially, and foods in that family." My oldest daughter hates broccoli, which we eat once a week. I will shamelessly bring up food for everything, because its one of the few areas I can still control, can still understand, can still use to express my love.

I cook special extra-spicy dinners for my father, who has lost his sense of taste to Parkinson's. For potlucks and holidays, which I still attend at my ex-husbands house, I cook my curried rice with sausage and black beans. (After 14 years and hundreds of relatives, you cant just stop going and bringing your signature dish.)

At Easter and Thanksgiving, I cook hams big enough to share with many neighbors and relatives, thinking the whole time of my mother-in-law. And once a week, I bake the chicken-and-potatoes dinner.

I have turned into the kind of woman who delivers dinners, who empties a whole bag of potatoes in one night, who will baste and think of the scary stuff and the good stuff in life. I will be this way forever, I know, and hope someone brings dinner for me, when I need it.