Our correspondent retraces the thin threads that led to his being drugged and robbed in the heart of Istanbul. 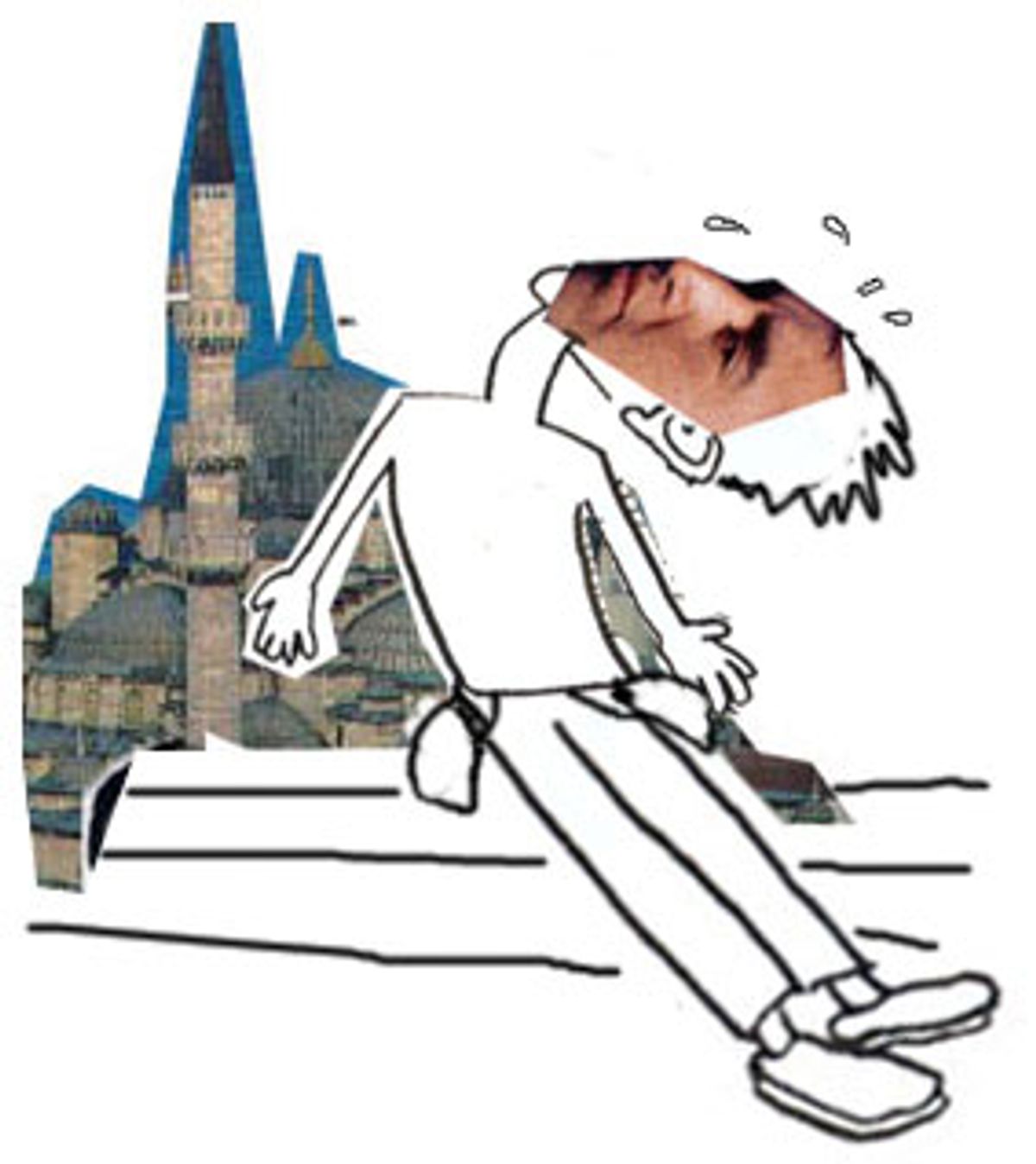 The simultaneous charm and risk of travel is that it shakes up the paradigms and habits that help you simplify and interpret day-to-day life. Life on the road, for better or for worse, vivifies a muted aspect of reality: It makes you realize that random factors influence your life just as much as planned ones.

On Page 80 of the Lonely Planet guide to Turkey, there is a passage entitled "Turkish Knockout" that reads:

"Thieves befriend travelers, usually single men, and offer them drinks which contain powerful drugs that cause the victims to lose consciousness quickly. When the victims awake hours later, they have a terrible hangover and have been stripped of everything but their clothes. The perpetrators of this sort of crime, who are usually not Turkish, often work in pairs or trios."

Bad fortune tends to magnify and mythify these innocuous little details and oversights. That I never read Page 80 of my guidebook during my first four days in Istanbul is one of a thousand factors which, in retrospect, seemingly conspired to leave me unconscious and penniless one night in the middle of the city.

A certain 101-level existentialist (Kierkegaard, I think) once suggested that life is lived forwards, but understood backwards. With this in mind, I have recalled and re-recalled the three hours preceding my robbery so many times that, now, the event itself almost seems like a miracle -- a divine shroud woven from 1,000 thin, perfectly converging threads of chance.

Of all the factors that contributed to my fate in Istanbul, perhaps the most damaging variable was also the most innocuous: Shortly after purchasing a book of Middle Eastern myths at a shop near the Sultanahmet tram stop, I met up with a couple of Australians from my postponed overland truck trip. They informed me that our trip leader had finally turned up in Istanbul, and was due to arrive with the group in Sultanahmet at around 7 that evening. Figuring this would be as good a time as any to register and pay my trip fees, I returned to my hotel and took my passport, traveler's checks and $400 in petty cash from the lockbox.

Thus, for the first time since I'd arrived in Istanbul, I was personally carrying all of my money and identification at once.

I emerged from my hotel to find Mustafa, the sleepy-eyed assistant from the water-pipe cafe, waiting there for me. "I see you inside," he said. He pantomimed smoking a water pipe. "You remember?"

At the time, I wasn't sure why Mustafa had pegged me as a dining companion. Initially, I thought he was going to tout me to some expensive restaurant, but instead he took me to a street vendor for flat bread and meat sauce. He briefly dug for pocket change, but made no protest when I paid for the food myself. In an inspired flourish, I even stopped at a storefront market and bought two Efes-lager tallboys -- one for each of us. Mustafa led me to a park bench near the Hippodrome, and we ate our meal in the late-day sun.

Since Mustafa wasn't much for conversation, I took out my Middle Eastern myth book and began to read. After a few minutes, Mustafa took the book from me and started to flip through the pages. Whenever he saw an illustration, he would ask me what it was. "I don't know," I would tell him each time. "I haven't read the book yet."

At some point during this charade, Ahmad flopped up out of nowhere and sat down beside us. "Mr. America!" he said, startling me a bit. "We go to McDonald's again?"

I looked over at the African teenager, who was already peering around for other tourists to hustle. "No, I think once a day is enough, Ahmad."

Mustafa looked up from the book, laughed and handed his beer to Ahmad. Ahmad took a polite sip, and the two of them paged through the illustrations in my myth book.

"What's this?" said Ahmad, pointing at a Babylonian drawing.

For a moment, I felt perfectly happy to be perched on a park bench in Istanbul with a teenaged Senegalese pimp and a homeless Turkish onanist. Sitting there, basking in the first blush of my beer buzz, I felt like I'd rediscovered a couple of misfit little brothers.

After a few minutes, Mustafa made like he had to leave. "I work now," said, pantomiming a water pipe again.

Mustafa held up the myth book. "You give to me?"

A part of me wanted to let Mustafa keep the book, but I'd just paid $13 for it and had barely read the first page. "Can you read English?" I asked.

"Then I think I'll keep it for myself," I said.

Mustafa stood up to leave. "You come?"

After Mustafa left, it didn't take long for Ahmad to get bored with both me and the myth book. "Will you stay here today?" he asked.

"Because I will leave now. But maybe I will come back with a beautiful woman for Mr. America."

"Whatever you say, Ahmad."

Ahmad flopped off, leaving me alone on the park bench. Since the folks from the overland trip would be arriving on the tram, I moved 50 meters over to a bench within view of the tram stop. I wasn't there for five minutes before a round-faced, olive-skinned man came up and asked me if I would take a photo of him and his friend. I set down my beer and took a couple of shots of them standing together. Even with their touristy hip-packs and sunglasses and cans of Efes, the pair looked awkward and out of place.

"Where are you guys from?" I asked.

"You try and guess!"

I've always been awful at guessing nationalities, but looked them both over. The round-faced man looked vaguely like an old Puerto Rican friend of mine. His friend, a skinny, brown-skinned fellow with intense eyes and smoke-stained teeth, looked Persian. I decided to place my guess somewhere in the middle. "Are you from Spain?" I said.

The Puerto Rican Moroccan introduced himself as Mohsin and said he ran a pizza parlor back home. The Persian Moroccan's name was Hasan, and he told me his parents were diplomats in Malaysia. They were on their way to visit Greece, and -- since I'd recently arrived from Greece -- I decided to offer a few travel tips. Paging through the maps in their French-language Greece guide, I gave them the kind of hearsay advice and half-digested guidebook information that travelers always share with one another when they cross paths: which mountains are supposedly good for hiking; which islands are supposedly good for partying; which historical sites are supposedly worth their while.

"This is great," Mohsin said as I briefed him on various attractions. "How do I thank you?"

"No worries; sharing travel secrets is a time-honored tradition."

"We are new to traveling, I guess." Mohsin held up his can of Efes. "Maybe you want a beer?"

"I already have one," I said, pointing to my own can.

"How about food? We can go to the waterfront and eat fish. Please. You are our first American friend."

"I don't much like fish," I said. "Besides, I really don't have time to eat. I'm meeting some people here in about 30 minutes."

Mohsin seemed distressed at the thought of me not liking fish. "You don't like fish only because you don't know fish!" he exclaimed. "Moroccans are the best fishermen in the world, and I know how to choose the best fish. I can look a fish in the eyes and know if he's a good fish or a bad fish. I can teach you!"

In the previous weeks, I'd had a Finnish girl teach me how to read palms and a pair of Hungarians instruct me on tasting wine. Learning how to size up a fish seemed almost too weird and charming to pass up. Still, I had other priorities. "I'm sorry," I said, "but I really can't miss my appointment."

"I will give you a 10-minute lesson to looking at fish. You will be back here before your friends, and when they arrive, you can teach them also about fish."

I pondered this for a moment. "We'd better hurry, then," I said.

I jammed my myth book into my back pocket as we trotted off toward the waterfront. Halfway across the Hippodrome, I spotted Ahmad chatting up a couple of unenthused-looking Germans. In good spirits, I yelled over to him: "Where's my girlfriend, Ahmad?"

Ahmad looked over at me distractedly. "Hello!" he said, as if trying to place me.

"Do you wanna learn how to buy fish?" I called to him.

A look of mortification came over Mohsin's face as I said this. "No!" he hissed. "Don't bring that boy with us."

"He's an African. Africans are cheaters and thieves."

"You're African, too, Mohsin."

By this time, Ahmad had returned his attention to the Germans, so we kept walking. "You shouldn't judge people that way," I said to Mohsin. "You have to judge people as individuals. There are good and bad people everywhere you go. That's one of the things you learn when you travel."

Mohsin laughed and took a package of creme-sandwich cookies from his daypack. "Life is all we have." He popped a cookie into his mouth and handed another to Hasan. "Maybe it's good to like everyone."

Mohsin and Hasan had played their roles perfectly. When Mohsin tossed me one of the creme-sandwich cookies, I didn't even remotely suspect that it had been laced with (most likely) Rohypnol. I didn't think much of the slightly bitter taste as the cookie went down, nor did I think it suspicious when Hasan stopped to take a leak in the bushes near the waterfront. Mohsin suggested we sit on a park bench while Hasan did his business.

The last thing I recall that day is Hasan furtively poking around in the foliage along the old stone retaining wall that overlooks the Sea of Marmara. The very next instant in my memory is one of night and solitude -- of me drugged and disoriented, momentarily trying to remember how to walk again.

Anyone who's been robbed clean overseas will know that the days following your robbery provide a kind of masochistic therapy. Amidst the tedious hours of down-time in various police stations, consulates and traveler's check offices, you have ample time to reexamine each individual thread leading to your misfortune.

To retrospectively pluck any one of these threads is to watch the robbery neatly unravel into some idealized parallel future. It's a torturous, yet irresistible exercise.

In time, this exercise of memory renders things relative: It makes you realize that things could have been much, much worse; it makes you realize that bad experiences, on the road or otherwise, help you appreciate good experiences otherwise forgotten. You come out, in the end, with a sense of wonder at all those other, unseen moments when the threads of chance fluttered -- nearly connecting, but not -- just past the periphery of your life.

And then -- once you have replaced your passport and filed away the lessons learned -- you resume weaving.

Because you now know there is a certain holiness in the notion that those threads exist at all.