Savoring rvsti, fondue and the legacy of William Tell. 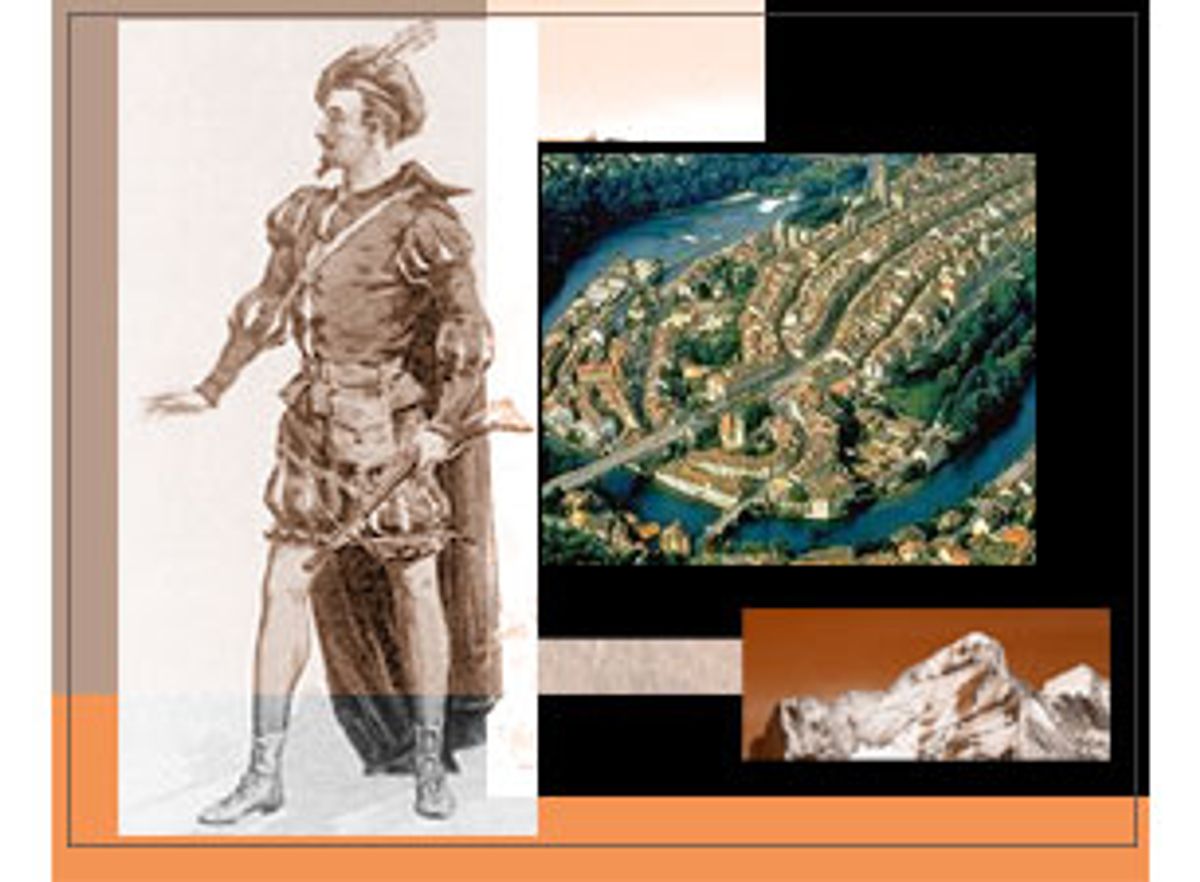 For centuries the valleys of Switzerland were dominated by powerful families who created city-states and spent much of their time fighting for control of the land and the peasants. But the ancient forest districts of Uri, Schwyz and Unterwald escaped feudalism and their citizens lived on the mountains in relative freedom. They governed themselves through small assemblies that were an early form of modern democracy.

In the 1200s, however, Count Rudolf of Habsburg tried to take control of the forest cantons through his appointed tax agents. This was a bad move. An arrogant jerk called Gessler was one of the agents. One day he came into the town of Altdorf, hung his hat on a pole in the square and insisted that everyone who passed must bow to it.

A local farmer named William Tell came by and told Gessler what he could do with his hat. Gessler ordered Tell to shoot an apple off his son's head.

There is no explanation for Tell's compliance, but the story has him shooting the apple off his child's head and then telling Gessler that if the first arrow had missed, the second would have gone into Gessler's heart. This occasioned an intense argument between the two -- and eventually that's exactly where Tell's arrow ended up, killing Gessler.

Altdorf takes credit for being Tell's hometown. It has a Tell monument and a Tell museum, but in the end historians are not sure that Tell really existed or even if he did, that the events of the legend actually took place. But real or not, the story represents the death of tyranny and the triumph of freedom -- and these are important elements in Swiss tradition.

In 1804 Schiller wrote a play about the Tell tale, and in the 1820s Rossini wrote the William Tell opera. So William Tell and the apple became the central story of the founding of the Swiss Confederacy -- and this became my excuse to visit the capital of the confederacy: the city of Bern.

Bern is a peninsula formed by a bend in the Aare River. It was founded in 1191 by Duke Berchtold V of Zahringen, but you probably knew that already. For many years it was the largest city-state north of the Alps.

Bern is the federal capital of Switzerland, but it has resisted the international atmosphere that you find in most European capitals. Instead it presents the traditions of Switzerland within the context of its own local history. The medieval and baroque buildings are constructed of local gray-green sandstone, which give the streets a feeling of solidity.

You can get around the old town without much regard for the weather since most of the streets are covered with arcades. Over the centuries the population of the city has grown but not the available space, and accordingly every square foot has been put to good use; even the ancient cellars have been turned into shops, theaters and restaurants.

Much of the best restaurant food in Switzerland is found in small establishments that offer local specialties. But because Bern is the capital of Switzerland, it has a number of restaurants that feature dishes that represent the national gastronomic tradition.

My favorite place is Restaurant Della Casa, where they make the definitive rvsti. Rvsti means "crisp and golden" -- and that is exactly what these potatoes are. Traditionally this dish was made with leftover boiled potatoes that were shredded, flattened and sautied on both sides. It's served with a side of sausages -- but I understand most people mistakenly think the rvsti is the side dish. The restaurant is located at Schauplapzgasse 16, 3011 Bern, Switzerland; tel: 011 41 31 311 21 42.

In addition to rvsti, it's also mandatory to try cheese fondue in the country where it was invented. The Swiss have been producing cheese since pre-Roman times, but the production traditionally took place during the late summer. By mid-winter the cheese was very hard and the best way to eat it was to melt it. The melted cheese was also a great foil for hard bread.

Traditionally the Swiss make their cheese fondue in a heavy earthenware pot. Emmental and Gruyere, the two most famous cheeses of Switzerland, are melted with a little wine. And the dry bread is dipped in. The one-pot communal meal is just the way people once ate every day on the mountain farms. The crust that forms on the bottom of the pot is considered a delicacy and shared by all the diners.

Another melted cheese dish worth a try is called raclette. The story goes that someone in the Valais district of Switzerland left a half wheel of cheese near the fireplace and the heat melted the surface of the cheese. The melting cheese was scraped off and eaten along with boiled potatoes and cornichon pickles. The cheese, as well as the dish, is called raclette and it has become one of the most popular dishes in the country.

There's also the town clock built in 1530. As you would expect of any Swiss clock, it's still running. The trick is to show up for the 10, 11 or 12 o'clock performances. The higher the number, the longer the show. The Swiss love numbers and they've been putting on a show for centuries.

On the Web: Switzerland Tourism

On the Web: Bern Tourism