The hippies of the '60s reinvented drugs, sex and the family, but it took another generation to do the job right. 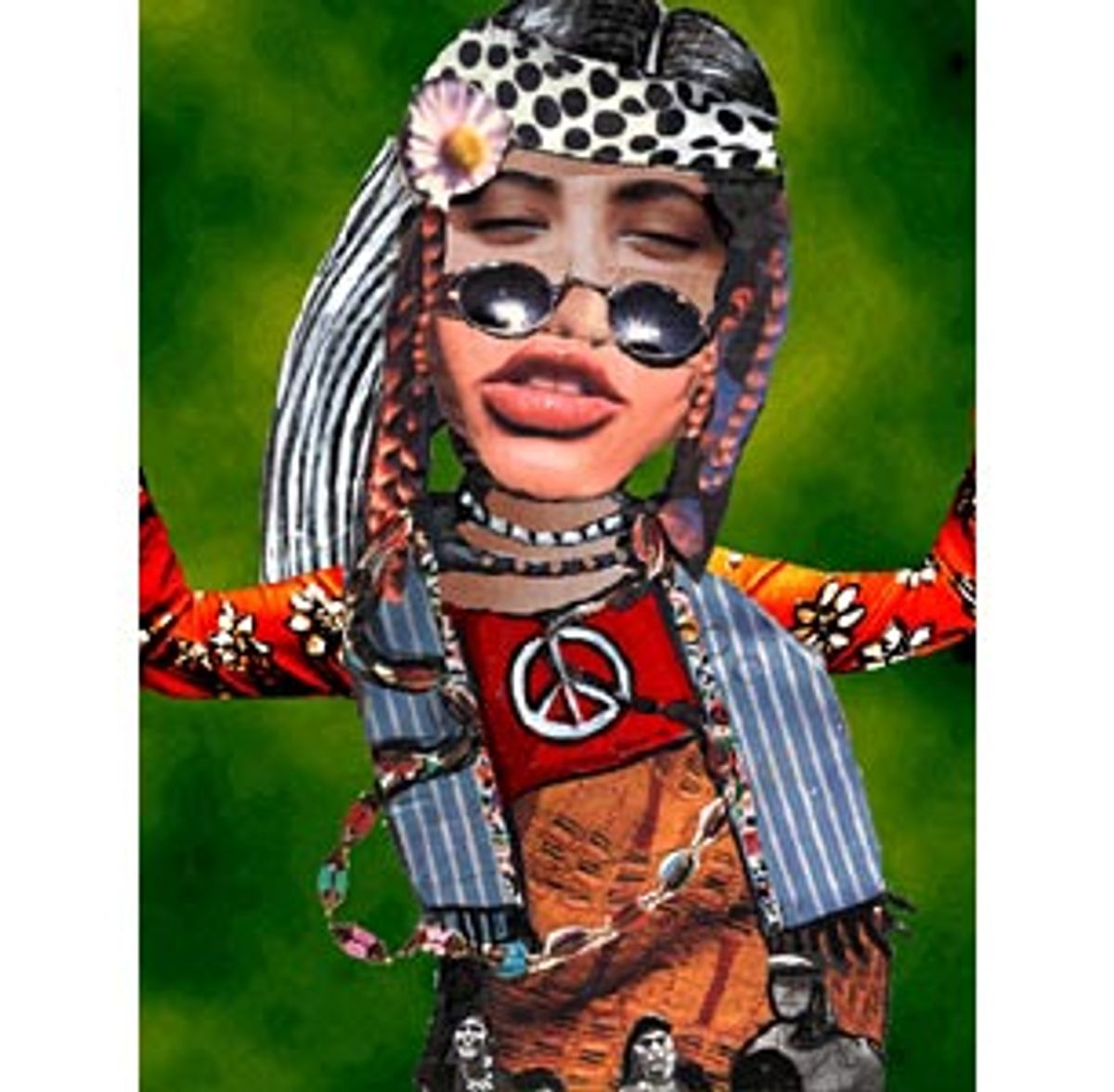 Reinventing the American family entails a paradox: The qualities that
inspire a person to reject the living arrangement traditionally sanctioned by religion, psychology and the IRS -- Mom, Dad, Bud and Sis holed up in a single-family house with a two-car garage -- may not be conducive to
smooth immersion in a replacement clan. Take a passel of dropouts and freaks -- whether they be anti-war rebels, first-wave feminists, closet-exiting gays and lesbians or members of the raving, piercing, clothes-swapping underground -- put them under the same roof, and you may
have trouble assembling everybody for group meditation.

Such, at least, proved to be the true for most of the commune-dwellers who
figure in Timothy Miller's "The 60s Communes: Hippies and Beyond." For this, the second volume of a projected trilogy, Miller and his research assistants conducted several hundred interviews with former and
current communards. The author, a professor of religious studies at the
University of Kansas, is palpably sympathetic with the movement (which no doubt loosened tongues during those interviews) and intent on finding out why, with rare exceptions, '60s communes were such fleeting things.

Starry eyes were unquestionably a factor, and Miller recognizes the, shall we say, dippiness of so many hippies. Yet he painstakingly harks back to the predecessors of the '60s movement (he chronicled these early communitarian efforts in the first volume of his trilogy, "The Quest for Utopia in Twentieth-Century America") and cites cases in which embryonic groups took over old ones rather than starting afresh. This
emphasis on wise continuity scants, I think, the brave-new-world mentality
that shaped so much '60s rebelliousness. Most of us who reviled the presidents and the Pentagon, ducked out of the money-grubbing rat race, disdained matching china, used marijuana and LSD as passports to countries of the mind, strapped on backpacks and took to the trails, lived defiantly in what used to be called "sin" or "perversion," helped make celebrities of the utterly untalented or the marginally gifted (Tiny Tim, Andy Warhol) just to flex our baby-boomer power and outrage our elders -- most of us wanted no truck with the past. Half the fun of doing anything in those days was making it up as you went along.

Which could mean that you might suddenly find yourself living in a Seattle
Victorian with four or five decent sorts -- a woman who stayed up half the night consoling callers to the Rape Crisis hotline, a man who was trying to cobble together a living by leading walking tours of the city, a
woman who worked for the Lutheran Church but was savvy enough not to
proselytize her housemates, a straight couple so adamantly leftist that they supported the Russian invasion of Czechoslovakia -- along with a creepy guy who inhabited the basement, ate nothing but a vegetarian mush that left residues impossible to dislodge from a saucepan and poured his energy
into a cult centered on mutual excoriation (you and a co-cultist sat down
and systematically ripped each other's ego to shreds).

The line between a tight group house and a commune was so slender as to be almost indistinct, but in either case the enduring clusters in Miller's survey tend to be ones that laid down rules, respected individual privacy and screened applicants. Accepting any loser who showed up seeking admission was almost a surefire recipe for early breakup. As one
member of a failed commune told Miller:

It is said that happy people do not volunteer to go to War. Neither, I say, do they join Communities. The roots of this unhappiness may lie in either themselves, or their
world. We at Sun Hill did not know how to determine one from the other, and so we hardly tried; we accepted virtually all who came. But I think that we at Sun Hill tended to assume that each other's various inadequacies to live in the Mass-Society were due to the faults of that Society, and
not to those of the individuals in question. Therefore, we of course,
assumed that such inadequacies (or "hangups") would straighten themselves out within the "healthy" context of our Utopia. This -- needless to say -- was naive.

Another investigator, cited by Miller, concluded that close sharing, "supposedly the essence of what communes are all about," in fact shortened communal life spans: "The level of sharing typically diminished over time if the group survived. In essence, modern communards were always individualists more than communalists."

Reading Ann Powers' "Weird Like Us: My Bohemian America," you get the impression that today's dissenters may actually have learned something from my generation's fuck-ups. On the whole, the people whose stories Powers tells seem more shrewd, informed, measured and
persevering in their rebellion than we were. Instead of fleeing the system
and then rebounding to embrace it whole-hog, they have learned how to stand slightly apart and manipulate it.

I can't claim to have always followed the thread of this book -- an inspired
chapter on drugs is followed by a strange one that touts shoplifting from the very shop you work in as a way to mitigate drudgery and low pay. Powers has accommodated herself to the system sufficiently to be pop music critic for the New York Times. (She seems to like the job, but in light of her book, who can blame the security guards if they start checking her bag for pilfered office supplies whenever she leaves the building?)

Powers is a terrific storyteller and a cheerleader for the lifestyle she
advocates: a kind of enlightened hippiedom, in which people pick and choose among domestic and sexual arrangements, job possibilities and available stimulants while eluding some of the most oppressive influences of the establishment, including the tyranny of fashion and the reluctance to examine sex closely. "As conventions continue to self-destruct," she writes, "the bohemian choice to live differently suddenly becomes essential for everyone ... If we who are working on those reconfigurations begin to reflect openly upon our choices, we can provide a moral vision that challenges the antiquated ones that conservatives cling to and that most
Americans seem eager to reject."

For Powers, the cardinal virtue is rationality, even when you're doing something stupefying, like taking drugs. "Finding the balance between the drug's will and your own," she writes, "is the crucial step in negotiating that reality instead of letting it just crash over you." Drug-taking, she seems to be arguing, is a skill like many others. You're bound to make some mistakes
while driving with your learner's permit, which argues for doing drugs in
the company of loyal friends who can come to your aid if you need them. This is an odd, almost startlingly sane approach to a superheated topic. So many Americans take an absolutist stance toward drugs -- Just Say No or libertarian indifference to what anyone else does -- that Powers' determination to slow down and scrutinize the subject is refreshing and useful.

About 10 years ago, novelist Mary Gordon argued that of all the
revolutionary impulses of the '60s, only one had enjoyed lasting influence: the sexual. In Powers' view, that may have been enough. Sexual liberation has not only freed up people to choose the partners and practices that
suit them but also has led to a rethinking of what a family is. With
gay men and lesbians in the vanguard, sexual freedom and open unorthodoxy have led to planned single-parent families, two-mommy and two-daddy families, sperm-donating fathers, womb-donating surrogate mothers -- and a huge increase in the percentage of households not centered on a married couple.

Here again Powers insists on probing a topic -- sex -- that many people
would prefer not to focus on, if not because of Puritanism then because they're afraid that too much scrutiny will rob eros of its mystery. I myself have always thought sex can take care of itself, no matter how much light is shed on it. I grew up in an era when the navel was considered too racy to be shown on movie or TV screens, and no amount of attentiveness to sex can be more joy-killing than that.

As if to establish her credentials as a non-flinching examiner, Powers
dwells on the S/M scene -- or, rather, scenes, since there appears to be a marked difference between, say, the safety-conscious San Francisco brand and more reckless international kinds. In an electrifying passage,
Powers quotes an aficionado of stun-guns explaining how she talked a
reluctant partner into going with the current. "We were able to negotiate through it," the informant reports. "It was awesome." More power to them.

Toward the end of "The 60s Communes," in summing-up mode, Timothy Miller quotes several grizzled hippies who take issue with the term "failed commune." The mere fact that their communes ended, these onetime members argue, doesn't mean that the experience wasn't worth having. Looking back, a nostalgic woman remembered "the way we all worked
and lived together without any power or authority structure, simply following our own consciousness of what should be done each day ... The way that children [were] cared for communally, with the men also caring for them, without any stigma about child-rearing being effeminate ... And
nudity, bodies of all shapes, so readily accepted just as part of nature.
And no power! Only a natural hierarchy of skill, experience, and knowledge."

If the naive idealism of the '60s communes has served as a cautionary tale to
the steely-eyed inhabitants of the bohemian enclaves investigated and experienced firsthand by Ann Powers, well, my generation could have left worse legacies than a primer on How Not to Rebel.

Dennis Drabelle is a contributing editor at the Washington Post Book World.