What happened to the exclusive Club Mac?

Is Jobs' new Internet strategy turning Apple into a playground for newbies? 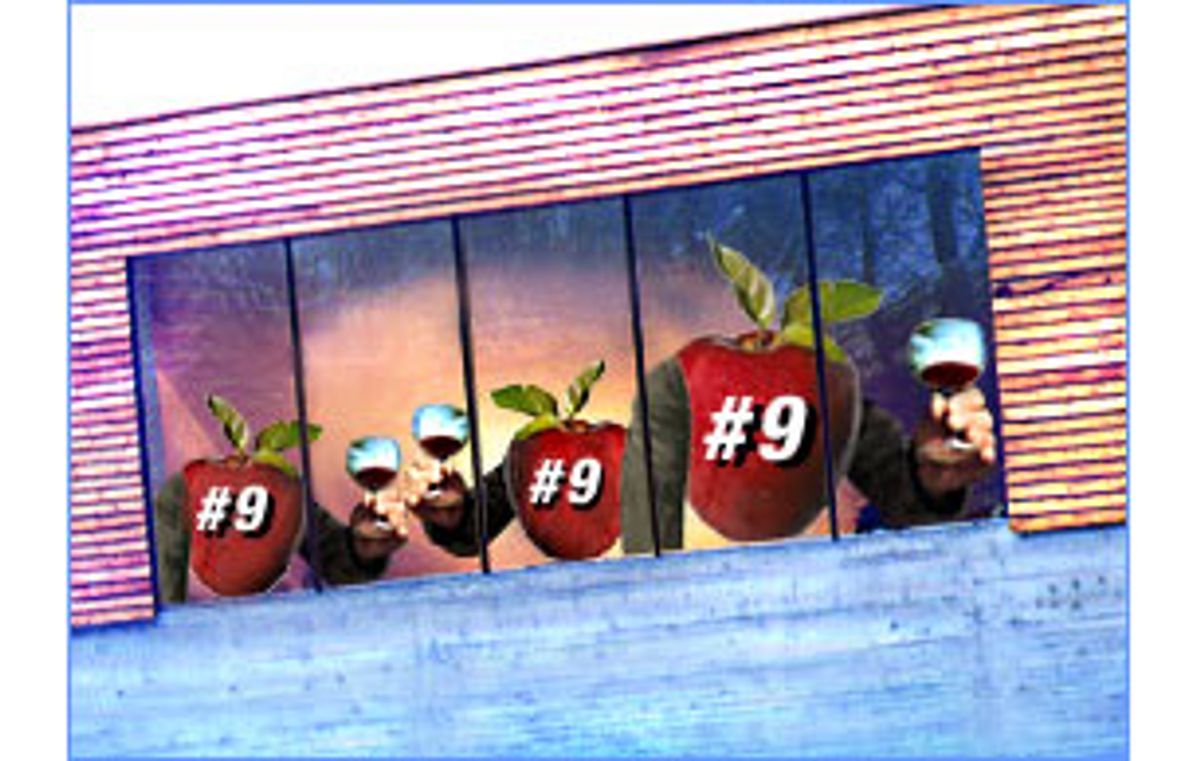 The purchase of my first Mac back in the '80s was a de facto pledge of allegiance to the anti-PC club. I loved being inside Apple's velvet ropes, while lots of clueless PC geeks stood around outside. But with Apple's recent success, the Mac club is becoming like a New York hot spot that welcomes the bridge-and-tunnel crowd. When anybody with $999 for an iMac can get in, who will be left for us to "Think Different" from?

This month's Macworld Expo in San Francisco really brought it home: Steve Jobs is grafting little stoplights onto our operating system (stay tuned for OS X). Apple now has an "Internet strategy," for Chrissake. Its Web site has been transformed into a portal, at least to everything Apple wants you to find. You can have your own Mac.com e-mail address, send iCards, build a boilerplate home page and store documents on Apple's server, as part of Apple's new iTools Internet services. Apple will even pre-screen your kids' Web travels and provide you with site reviews to help you answer the question -- no! -- where do you want to go today?

And it's all free -- if you own a Mac and pay the $99 dues to upgrade to Mac OS 9. Of course, you must have a box (PowerPC or better) that will support the power-hungry OS 9. Then, later this year you're expected to upgrade to the new, Windowish -- read: cheesier -- OS X. (Code word "Aqua," in case they ask you at the door.)

What's next? "You've got QuickTime"?

In his bid to pump up market share, Jobs is turning Apple into a playground for newbies. Perhaps this is good for business -- on Wednesday Apple reported a $183 million profit for the first quarter of 2000, posting revenues 37 percent higher than the same quarter last year. Or, as Jobs put it in his keynote: Apple sold an iMac every six seconds in the fourth quarter of 1999. The question for the Mac faithful, though, those of us who stuck around through all the red ink, is more pressing. Yes, Apple is succeeding. But what about our chic little club? Does Apple have to dumb itself down into an America Online to keep growing its numbers? And does Jobs really have to take us down the road of proprietary features again?

Macworld columnist David Pogue isn't worried in the slightest about Apple's new Internet strategy. "It looks like a win-win to me, because Mac customers get a number of terrific new features at no charge, get to feel proud they're Mac users, have some additional features to call their own - and Apple gets to build up one hell of a terrific mailing list," says Pogue, who is also the creator of the Missing Manual book series for O'Reilly Books.

Other long-time Mac users, however, think requiring an OS 9 hand stamp to enter Apple's Internet universe is going too far.

"I'm concerned about increasing proprietization of the Internet," says Charles Moore, a Nova Scotia-based columnist for Applelinks. "This already reared its ugly head with Microsoft Web sites that require Internet Explorer for access and others that demand Intel's Pentium III chip."

Moore says such "gated communities" in cyberspace could be a disturbing precursor to more slamming doors: "Will the new AOL Time Warner conglomerate, for instance, continue to offer Microsoft's MSN.com subscribers, or for that matter Apple's Earthlink subscribers, full and unfettered access to AOL Time Internet content?"

Angela Pratt, a Macintosh technician in Atlanta, loves the idea of Apple's new online offerings. "It's about time Apple jumped on the portal bandwagon. It's all the rage -- right up there with e-commerce," she says. But, she's incensed over the proprietary-only design: "Something Apple really needs to STOP emphasizing!" she says via e-mail. "It is one of the main reasons I hear when I ask why people choose PC over Mac."

Nevertheless, like most Mac diehards, Pratt lets the cheating boyfriend back in the bedroom. She loves him, after all. "It sure seems like the same old Apple to me: proprietary attitude, great products, no marketing skills whatsoever -- you know, Apple as usual!"

As a Mac technician, she supports more second-generation PowerMacs (circa 1995) than she does G3s and G4s. "It's just not smart to be exclusionary, particularly when many businesses and home users are not early adopters due to the fact that it is damned expensive to upgrade the OS when all the software must be upgraded as well," she adds.

Other Apple fans are squarely behind Jobs on this one. Bob Levitus, author of "Mac OS 9 for Dummies," says the strategy is "very smart" and shows that Apple is "evolving into a company that gets the Internet." The point, he says, is that Mac users have a place on the Internet just for them -- a nice balance to the dozens of Windows-only applications on CompUSA's shelves.

"I suppose Apple could take some heat for requiring OS 9 when they didn't absolutely have to. But I don't think this will kick up a huge fuss," Levitus says. It helps that the popular Mac fan sites -- like MacInTouch, MacFixIt and MacCentral -- have all posted instructions for using most of the iTools with earlier versions of the Mac OS.

"Anything Apple can do to make users consider a Mac as their next computer is good," Levitus adds. "And iTools, not being part of the Windows OS, [can] do just that."

Barry Fagin, professor of computer science at the U.S. Air Force Academy and a senior fellow in technology policy for the Independence Institute, says the Internet push is perfectly timed; it's time for Apple to think service. "The world is moving away from software as a product and toward software as a service. This will give Apple a new lease on life."

Nevertheless, in criticism-weary Cupertino, user grousing seems to be on the increase as Apple's comeback continues. Some of the iTools features -- like iReview, -- a Yahoo-esque collection of Apple-reviewed Web sites where users can pipe in with their 2-cents comments -- are riling some Mac users.

"There is concern that Apple will finally achieve the perceived long-sought goal of controlling to a large degree the dissemination of Apple and Mac-related news, especially news critical of Apple Computer, to the Mac-using public at large and specifically the growing class of new Mac users," says Ladd Morse, managing editor of MacSurfer's Headline News, an aggregator of links to Mac sites.

Morse points to "spirited discussion" this week on the Mac sites and boards. For instance, Dan Knight complains on LowEndMac.net that "Apple has so far found only 11 computer-related Web sites worth linking to on iReview. Of these 11, only four are Mac-centric, and three of the four are owned by the same publisher."

But in an interview, Peter Lowe, Apple's director of Mac OS worldwide product marketing, glossed over that concern. He says that iReview is "a guide to the best of the best of the Internet" -- and that Apple will consider reviewing suggested sites, Mac or not. "An important element of iReview is that viewers can suggest sites," Lowe says.

But Mac Web-masters are concerned that they may lose ad revenue and quality writers as what Morse calls the "bulk of less-inquisitive Mac-news readers" gravitate to the "Apple-anointed" sites. And it's tough to be rejected at the door: "Perhaps it is that cold flash of insight that many a company has had upon finding out that Apple or Microsoft has just announced a product to be distributed for free that directly competes with their own product, passion and livelihood," Morse says.

"Or perhaps Apple has simply fallen down on the job and will get to it eventually," he adds.

Another iTools component that has ruffled a few feathers is the new child-protection service, KidSafe. Apple is presenting it as an alternative to filtering, which is roundly criticized for screening out perfectly safe sites. Instead, the KidSafe function will only allow kids to visit some 50,000 pre-screened sites.

"Jobs is wrong; it's absolutely filtering," says Fagin, who also founded Families Against Internet Censorship, a plaintiff in the U.S. Supreme Court case that struck down a federal effort to censor online smut.

He thinks KidSafe is a legitimate market-based response to a social problem, but he won't use it for his 9- and 11-year-old kids. "I prefer to manage my kids' Internet access myself through candid discussions of the issues with them ... I am simply not comfortable trusting my children's Internet experience to anyone else, including Steve Jobs and the U.S. Congress," he says.

KidSafe raises very real social-engineering questions, say filtering critics. "I'm not a big fan of proprietary Web filters, period. What bothers me is the potential for third-party ideologies and political correctnesses to be insinuated into the filtering process. Who decides what makes the cut?" Moore says.

But at least parents can customize KidSafe to their own values, by adding sites to the KidSafe repository. And Apple reassures that an independent team of educators are filtering, er, approving the sites and are set to add 10,000 new sanctioned sites a month.

Still, KidSafe screens out a lot of content. Critics fear that filtering of any sort can treat kids as second-class citizens on the Internet - eliminating from get-go the sites of, say, individual pen pals in Australia, other kids' artwork, independent movie info or even homework chat rooms that aren't pre-approved.

And iReview and KidSafe could even work together to limit kids' knowledge to alternative Mac information. "I've got KidSafe right here. When it's enabled, I can't visit my own site that discusses Mac hardware upgrading or my personal site on AOL's home page service. Neither of them is objectionable, in my opinion," says Todd Stauffer, author of "How to Do Everything With Your iMac."

Nitpicking aside, Apple watchers are mixed on whether Apple is slowly abandoning the "Think Different" strategy and moving toward a more inclusive, lower-denominator approach. "It's absolutely an example of thinking different(ly)," Fagin says via e-mail. "Apple's user base has been smugly obsessed with their computers. They should stop thinking about their computer and start thinking about the Internet."

But Moore says the cartoonish look of Mac OS X, demonstrated at MacWorld, proves the company won't be thinking differently much longer. "The rather gaudy new Aqua user interface of OS X may alienate 'serious' computer types. ... Of course I may well be in a minority who likes the Mac OS more for what it does than how it looks," he says.

Yeah, personality counts for something, but it's the new, hip, fashionable Macs that are getting past the bouncer. "Apple products are gorgeous," Levitus coos. "Can you say that about any of the PC vendors?"

Bottom line: Like beauty, "different" is in the eye of the beholder - a fact Apple is banking on. "The brilliance of the brashness of Think Different is that it's very easy to apply it to yourself, regardless of Apple's intentions," Stauffer says. "It's an exclusive club and, yet, anyone can think he or she is a member."

Donna Ladd writes about technology for the Village Voice, Feed and IntellectualCapital.com, and syndicates her weekly Silicon Lounge column through Alternet.org.