"Play It to the Bone" 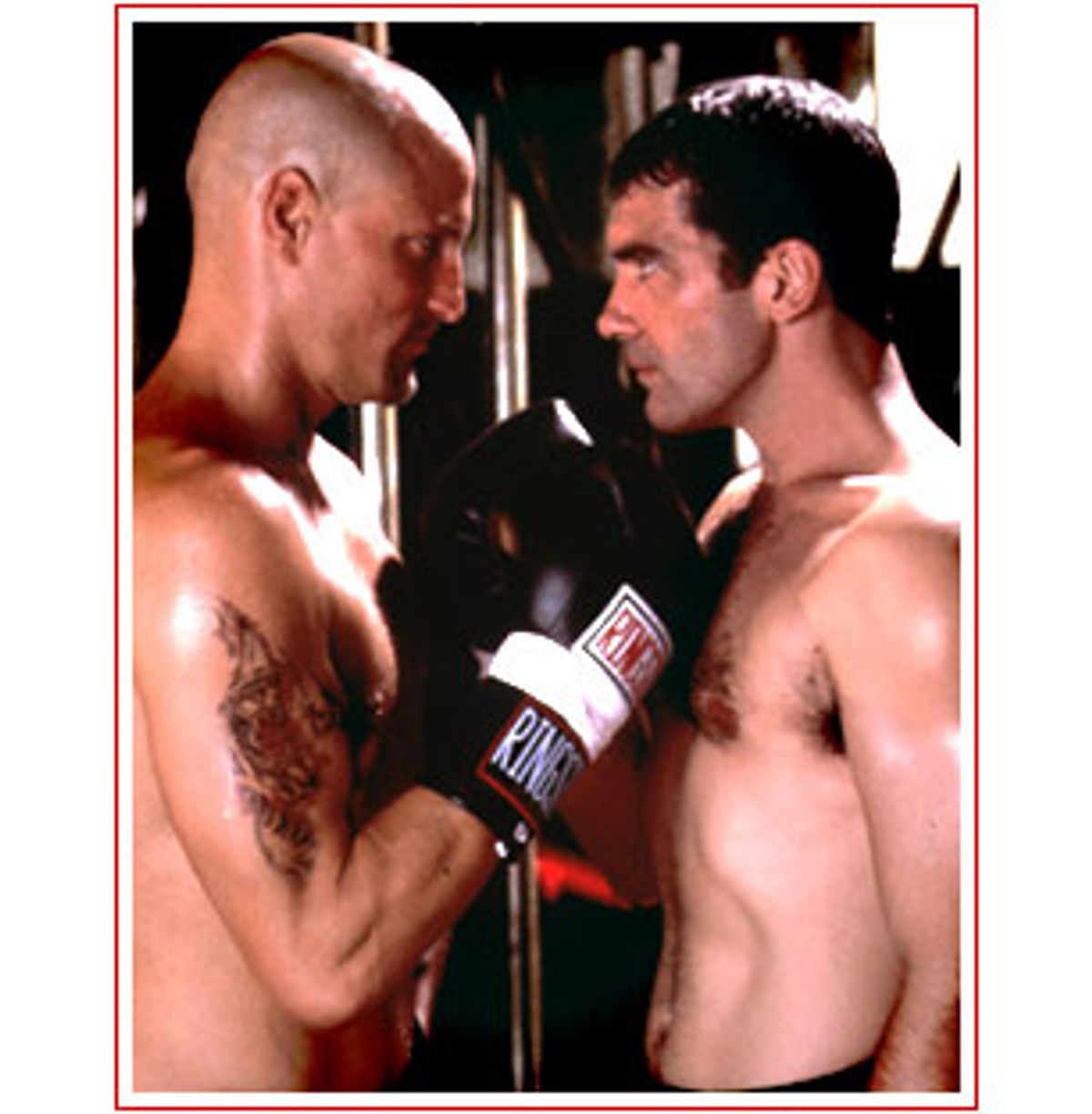 Ron Shelton's movies are generally so well made, and peopled with such wonderfully chiseled characters, that I cringe whenever anyone refers to them as sports movies. Of course, they are sports movies. But they're not like those dog-eared copies of "Instant Replay: The Green Bay Diary of Jerry Kramer" or biographies of Vince Lombardi or Johnny Unitas, the only things that some boys would check out of the school library -- books that would make them look cool to their peers and would also have school librarians sighing, "At least they're reading."

Unlike those books, Shelton's movies aren't about the archetypal champion's drive to be the best; he's far more interested in the intricate wormholes of failure and insecurity, and he's exceedingly interested in the power women have over men, particularly men who are athletes -- in other words, men who have every reason to swing their macho baggage like a street fighter's punch. Just because the women aren't playing doesn't mean they're not players, and that applies just as much to Ty Cobb's faithless mother in Shelton's greatest movie, "Cobb," as it does to Susan Sarandon's no-nonsense goddess of the diamond in "Bull Durham."

But even set against Shelton's milder entertainments -- pictures like "Tin Cup" and "White Men Can't Jump" -- "Play It to the Bone," which Shelton wrote and directed, doesn't quite have the goods. The story of two professional boxers, longtime friends who are suddenly pitted against one another both in the ring and outside of it, is enjoyable for any number of reasons: for its textbook craftsmanship, and for its beautifully edited climactic fight sequence, which acknowledges the brutality of boxing without ever apologizing for it.

But by the end, the bare bones of the story don't amount to much except a vague feeling of dissatisfaction, compounded by the unsettling sense that Shelton is just embroidering over old fabric. Vince (Woody Harrelson) and Cesar (Antonio Banderas) are invited to fight each other on the undercard of a Mike Tyson bout when both the scheduled boxers suddenly become unavailable. (Tyson has a tiny cameo in the movie, along with assorted other questionably glittery glitterati including Rod Stewart and Kevin Costner.) It's the chance of a lifetime for the boxers: The winner is supposedly guaranteed a shot at the title, and they're both desperate to make that last grab at glory before their careers wane. But first, they need a car to get from Los Angeles to Vegas, and so they show up at the doorstep of Grace (Lolita Davidovich), current girlfriend of Cesar and ex of Vince, to talk her into carting them in her staggeringly beautiful apple-green '72 Olds 442 convertible.

Grace is written as the movie's tough cookie, the girl who knows her cars and her boxers, who's bright enough to have come up with a few ingenious inventions that she's hoping to find backers for, who's got the guts to punch the lights out of any man or woman who crosses her up. Both Vince and Cesar are in love with her, and she loves both of them as well, cagily using her power over them to psyche them both up for the big match.

Davidovich's performance is fun (she's so game that you can't help being curious what she'll come out with next), and her character is never a footnote. But behind the wheel of her awesome car, even in her dashing square metallic sunglasses and distressed russet leather jacket, she's still just kind of a glorified soccer mom. The sexual politics of "Play It to the Bone" wouldn't have to be complicated to be interesting. But as it is, they're not even all that interesting. Grace is Cesar and Vince's muse, the girl in the candy-colored low-cut mini dress who's out in the audience cheering them both on. It may be a charming image -- the subtext is that she's so certain of who she is that she's got loads of spare confidence to lavish on these two lovable lunkheads -- but it doesn't have much depth or resonance.

And "Play It to the Bone" does feature one woman character who's so badly and so embarrassingly conceived that she practically throws the whole movie out of whack. What could Shelton have been thinking when he wrote the role of Lia (played by Lucy Liu of "Ally McBeal"), the foxy, hot-to-trot hitchhiker who, minutes after she's been picked up by Grace and the gang, asks if anyone wants to fuck?

At first it seems that we're supposed to cheer her as one of those delightful creatures who takes charge of her own sexuality -- a theory that's squashed like road kill when we're hammered with proof of how nasty, spiteful and shallow she is. She's an appallingly retrograde one-dimensional figure in a movie that otherwise at least tries to breathe life into clunky stereotypes -- a picture made by a filmmaker who's devoted his career to crumbling stereotypes instead of giving in to them. Lia may be just a glitch, but she's a distressing one.

And she's symptomatic of other problems. "Play It to the Bone" doesn't cut as deep as it could. Shelton is fully aware of Vince and Cesar's macho buffoonery, but mostly he revels in it rather than satirizing it. Throughout most of the movie, there doesn't seem to be all that much going on between the two of them, aside from a prickly homoerotic subtext (which, unfortunately, finds its outlet in some cheap fag jokes). Their verbal banter can be entertaining, and as they bicker and spar during the long car ride to Vegas their tension seems to increase by tough-yet-tender increments until it seems ready to blow. After all, these are two guys who love each other, getting ready to beat each other to a pulp.

Banderas, an actor who did his best work years ago for Spanish director Pedro Almodsvar, fell into a slough of boring and inane performances and then miraculously snapped to life again in "The Mask of Zorro," recaptures some of his old spark here. He's something of a naif -- you can't help being touched by the way his face falls when Grace disses him -- but one who can blow fire out of his nose by sheer will when the time is right. Harrelson doesn't fare as well: He's the rednecky tattooed Christian dude who's constantly torn between the high path and the low, and he doesn't do much to elevate his character beyond caricature.

Yet each of these characters seems more himself when he steps into the ring -- in other words, just when we might cease to see the two of them as flesh-and-blood people with feelings and fears and begin to see them only as athletes, their most human characteristics suddenly stand out in high relief. The match between Vince and Cesar is the heart of "Play It to the Bone." I'm ready to field the inevitable complaints that it just goes on too long, but I think that's the point, and the beauty, of it. It's dazzling, exhausting, breathlessly brutal and graceful at the same time.

Shelton's editor, Paul Seydor, works magic with the sequence, a meshwork of lyrical stretches and lancing jabs that's an homage to the sheer physicality of boxing even as it also cuts sharp windows into Vince and Cesar's deepest inner selves, their glowering competitiveness and their numbed confusion as, round after round, they seek only to mash each other to bits. Their encounter in the ring says more about their fractured but deep-rooted friendship than anything else in the movie. When one sustains a nasty-looking injury and the other is advised, of course, to "work the cut," the movie seems to find its natural footing, dancing right into that terrible place where friendship and honor are submerged by instinct and duty, and not for the better. It's the most honest scene in "Play It to the Bone," and the toughest to watch. If only it didn't leave the rest of the picture dangling on the ropes.