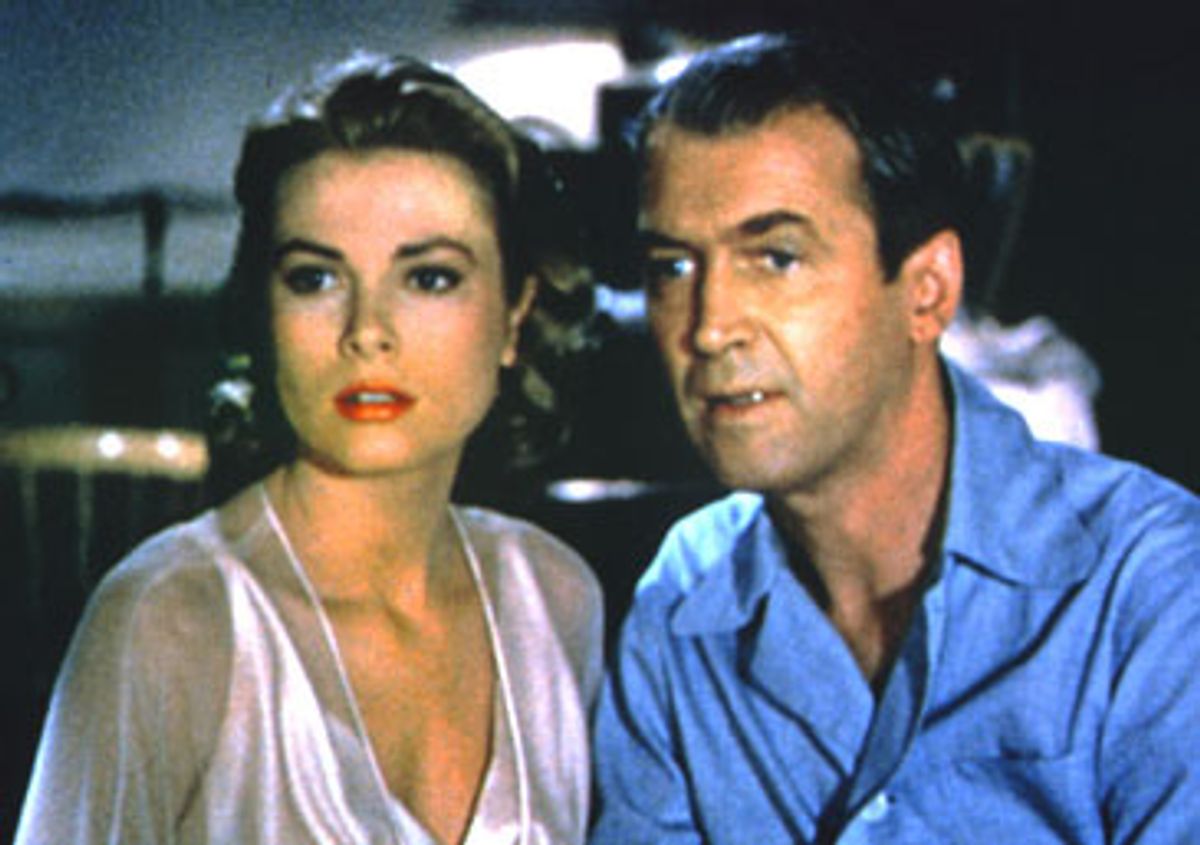 "Rear Window" makes me feel guilty. That may sound like an odd thing to say about a thrilling and witty picture. But while "Rear Window" -- which opens at New York's Film Forum in a newly restored version and makes its way around the country in the next few months -- is surely one of Alfred Hitchcock's best entertainments, there's no getting around that it's also an intensely discomforting experience.

Using the story of a wheelchair-bound photographer (James Stewart) who passes the time recuperating from a broken leg by spying out his window into the apartments of his Greenwich Village neighbors, Hitchcock made a movie that both encourages voyeurism and shames it, that refuses to condemn it or applaud it. (The film has been restored to its original visual sheen by Robert A. Harris and James C. Katz, the team responsible for the restorations of Hitchcock's "Vertigo," as well as Stanley Kubrick's "Spartacus" and David Lean's "Lawrence of Arabia.")

For Stewart's L.B. "Jeff" Jeffries, looking into his neighbors' apartments is as easy as flipping on the TV or killing an afternoon at a matinee. A daredevil photographer bored out of his mind by his six weeks of confinement, Jeff turns the lighted windows on the other side of the courtyard into his own private multiplex.

I'm hardly the first critic to point out that "Rear Window" can be seen as a metaphor for watching movies, but it should be said that the metaphor only goes so far. There's a big difference between peeping at strangers and watching a movie that's been made for the express purpose of being watched. But Hitchcock was uniquely suited to explore what Grace Kelly refers to in the film as "rear-window" ethics.

Movies are often talked of disapprovingly as a passive activity. That's too easy. In some ways, Hitchcock's whole career, his oft-quoted preference for suspense over surprise, was a black joke played on moviegoer passivity. An audience that possesses crucial information that the characters lack is both desperate to do something and excruciatingly aware of its inability to do anything.

In "Rear Window" Hitchcock presents a hero who is in the same position the director put his audiences in: a watcher who sees (or thinks he sees) what he is powerless to stop. Jeff is bored to distraction. "I'm going to do something drastic," he warns. And so, when he thinks that one of the neighbors he's been watching has murdered his invalid wife, he's thrilled. At last something has appeared to rouse him out of the stupor of inactivity and summertime heat. Jeff isn't the ordinary person caught in extraordinary circumstances, like Robert Donat in "The 39 Steps" or Cary Grant in "North by Northwest," characters driven to prove their innocence. He's not personally involved in the crime. He isn't horrified or frightened, or motivated by a sense of justice or outrage over a woman's death; he's turned on, which is made a bit too obvious by his use of a huge, phallic zoom lens to do his peeping.

The possibility of a murder gives Jeff the same vicarious thrill that sends him into war zones or onto the tracks of speedways to snap his pictures. (When an editor informs him of war breaking out in some new hot spot, he responds -- with pride -- "Didn't I tell ya that'd be the next place to blow?") Soon, Jeff's society girlfriend, Lisa (Kelly), and the insurance company nurse Stella (Thelma Ritter), both of whom have been chiding him for spying on the neighbors, succumb to the same fevered curiosity. And since the promise of a mystery is the thing that's lured us into the theater, we go along too.

Except that Hitchcock doesn't make it so easy. Put in the position of watching along with Jeff, we see moments so private that our first impulse is to look away in embarrassment: A single, middle-aged woman, whom Jeff dubs Miss Lonelyhearts, entertains an imaginary beau at a romantic dinner for two; a struggling composer comes home late and scatters his work in drunken self-disgust. Hitchcock makes us aware that Jeff feels almost no sense of impropriety at what he's seeing, and he doesn't leave it at that.

One of the most painful things Hitchcock shows us is the home life of Thorvald (Raymond Burr), the salesman Jeff comes to suspect of murder. A fat, rumpled man, Thorvald isn't attractive or agreeable. He's brusque and rude during his one interchange with a neighbor, and his life looks to be hell. His invalid wife, who appears to be a hypochondriac, begins berating him as soon as he walks through the door. When he attempts to be tender to her by placing a fresh-cut flower from his lovingly tended flower bed on her dinner tray, she laughs at him and tosses it away. And, having made this suspected murderer pitiable, Hitchcock goes even further, employing his traditional method of supplying the audience with information that his characters don't possess, but with a twist: This bit of information would seem to suggest that no crime took place. In the scene where Thorvald confronts Jeff, both of their faces remain in darkness. It's as if a character has walked out of a movie to demand an accounting from the person who has turned his life into entertainment.

The screenplay by John Michael Hayes (from the Cornell Woolrich story "It Had to Be Murder") lapses from time to time into awkward topic sentences. At one point, Stella declares, "We've become a race of peeping toms." But it isn't peeping that's on trial here as much as the propensity of human beings to detach themselves from one another. The backyard world of "Rear Window" isn't a neighborhood -- merely a collection of people living in close proximity. The neighbors barely speak to one another. Jeff's voyeurism is simply the most extreme form of that detachment. Hitchcock brings that to the fore in an excruciating sequence where Jeff and Lisa and Stella are so intrigued by what's going on in Thorvald's apartment that, despite the urgent evidence in front of their eyes, they nearly allow a woman to commit suicide. And Hitchcock ups the ante just a few minutes later when Jeff almost allows Lisa to be killed as he watches, acting as if he were a man watching a movie instead of a person with the power to prevent a murder.

Has any nice-guy actor so beloved of audiences ever allowed himself to be as unlikable as Stewart was in the films he made with Hitchcock? It's a tribute to them both that the most extreme character he played for the director, the obsessed detective in "Vertigo," is also the most sympathetic. But as the domineering doctor bullying his wife into giving up her career in "The Man Who Knew Too Much" (1956) and in "Rear Window," Stewart shows no qualms about playing a heel.

Stewart remains seated in a wheelchair for the whole movie; his lankiness seems to have metamorphosed into a collection of jagged edges and prickles. Jeff is short-tempered and sharp-tongued. Just as Hitchcock subverts our desire to play sleuth in "Rear Window," he also subverts the masculine view of marriage as a trap to lure men into a world of frivolity and softness. Jeff protests that he's not suited to Lisa's Park Avenue world and that she couldn't adapt to tagging along on his assignments and living rough. It's a familiar argument, one that's been traditionally used to trivialize women. Except that having established Jeff as something of a thrill junkie, Hitchcock makes it seem the protestations of someone unwilling to give up an adolescent world of boys' book adventure and become an adult. Lisa is the one who acts like an adult here, who tries to strike a compromise he won't even consider.

If "Rear Window" has a soul, it's Grace Kelly. So much has been written about her as Hitchcock's quintessential ice-cold blond, but she's the warmest and most likable character here. Yes, Kelly is a joy to look at (especially dressed in what are probably the most chic, beautiful outfits Edith Head ever designed) and she parries Jeff's objections with admirable, economical wit and pin-neat timing. But everything about Kelly's performance, and about the way Hitchcock presents Lisa to us, mitigates against the idea of the rich girl rendered untouchable by her money and style and manners.

Instead of using Jeff's ridicule to score points off of Lisa as a silly society airhead (which is how she would be presented by Hitchcock in "To Catch a Thief"), time and again he shows us how much that ridicule hurts her. And where Jeff brushes aside her suggestion that she's not beyond ending up like Miss Lonelyhearts, Hitchcock, in one breathtaking and wholly unexpected shot, raises just that possibility. Just as Hitchcock has invited us to enjoy a thriller only to disrupt our expectations, he invites us to enjoy Grace Kelly as the essence of the unruffled sophistication the movies have taught us to cherish, only to suggest a lurking despair.

It doesn't do away with any of the ambiguities that Hitchcock raises in "Rear Window" that Jeff turns out to be right. The worlds we have looked into are still private ones, the moments he has turned to for amusement are often too raw to be amusing to anyone but the wholly callous. Standing in for all the people who have been watched, Thorvald asks Jeff a question he is unable to answer, the unsolved mystery that hangs over "Rear Window" and the one that we may be no more able to answer: "What do you want from me?"