To succeed at Switzerland's hot new sport, you have to remember how to be a kid again. 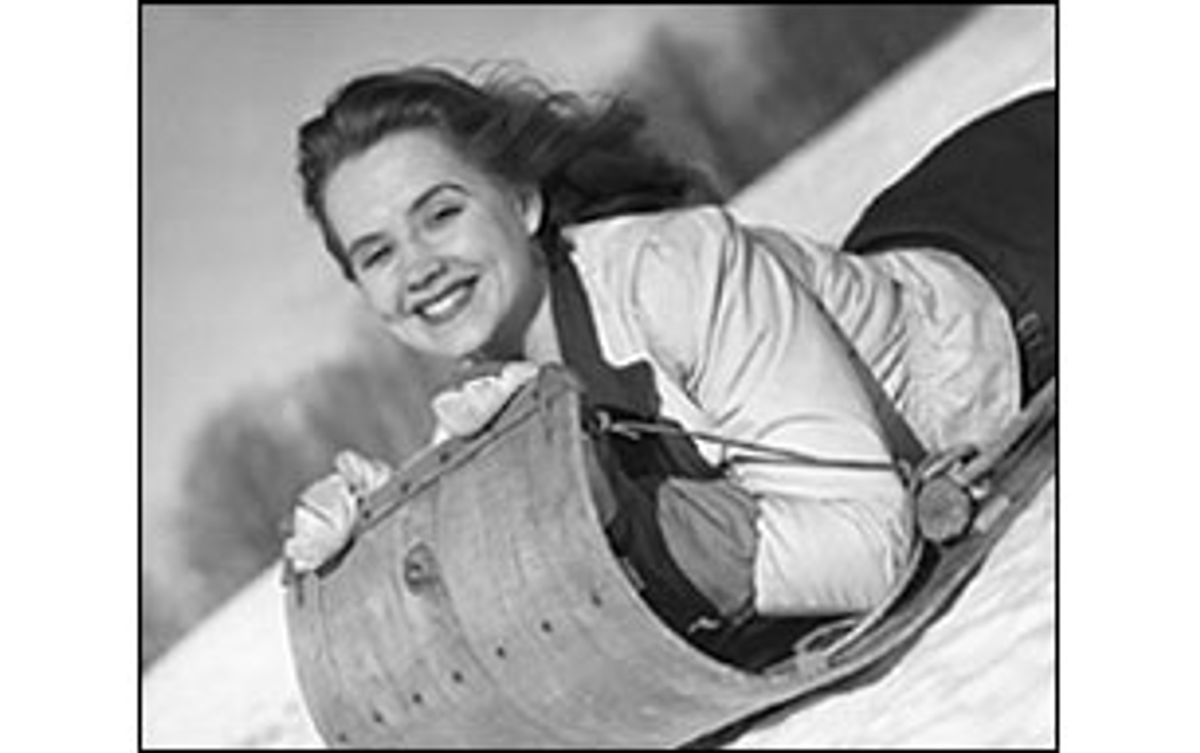 Ten people get off the train in Davos, Switzerland. Six carry ski bags, three have snowboards. I am the only traveler whose luggage is rectangular.

It is a winsome fate, to be a nonskier in a world-class ski resort. To be in Davos without skis is like visiting L.A. without a car. People wonder what you're up to (in my case, an assignment at the avalanche research center).

It doesn't help that Switzerland is in the midst of a record-breaking snowstorm. The snow is coming down hard, in knuckle-sized rafts of flakes, big pillowy chunks that hit your glasses and explode into fluff. Roofs are mattressed with snow, a foot since last night. A car goes by with bits of white still clinging to its exterior, like a man who's gone out with shaving cream on his face. (You can tell at once who has a garage and who doesn't.)

Outside my hotel window, pedestrians steady themselves with ski poles. A pair of teenagers ski down the street and park their equipment in a rack outside the pastry shop. (They have ski racks here the way we have bicycle racks.)

I have to get out and do something in it. At the information kiosk, a woman suggests "sledging," which I've never heard of. It has the sound of an arcane ice sport, like curling, which they do daily here in Davos. (Originally a Scottish sport, curling combines the joys of bowling and scrubbing floors and has gained great popularity in both Switzerland and Canada, countries with too much winter on their hands.)

Sensing my confusion, the information woman draws me a picture of what appears to be a person in a rocking chair. Then she points to the mountain behind the building. God love the Swiss! They slide down mountains in their rocking chairs! Then she points out the window at a girl who is pulling her little sister on a sled. Sledding, is what she means.

Sledding is apparently something of a trend these days. Ski resorts are building sled runs that hairpin down the sides of mountains for 1, 2, even 7 miles. I am directed down the street to the Shatzalp funicular railroad, at the base of which is a sled rental shop. A funicular is the precursor to an aerial tramway. It's a cable car that trundles up the side of the Alps at preposterous angles, an elevator with a slouch.

The sled rental man takes my 8 francs and hands me a sled. It is simple, made from wood and painted bright red. I hold in my mittens 35 pounds of sweet, unadulterated childhood. This is going to be great.

The funicular driver loads the sleds on the back of the tram, a good dozen of them, packed together like shopping carts. I am careful to note where mine has been placed, as they all look alike. At the top, I arrive at the back of the tram to see the driver handing No. 3, my sled, over to a woman in a teal ski suit.

As I ransack my brain for the appropriate German words ("That is my" I prepare to shout), common sense alights. They're all banged-up red sleds; who cares which one you get? To single out the one you came up with is to join the insane ranks of restaurant table-switchers and people at butcher counters who point out the exact two chicken breasts they want. The driver simply hands the sleds over to the nearest outstretched hand. Another reason to love sledding: It's missing the gear envy of downhill skiing.

I follow the sled people up a footpath to a stone gate, the entrance to the sledging course. A crowd has accumulated, a half-dozen adults standing around, trying to remember how to be kids. A woman sits down on her sled and urges it forward as one does with one's chair at a dinner table.

To similar effect: The sled moves several inches and stops. The rest of us ponder and stall. Finally a boy of perhaps 7 parts the forest of brightly hued legs, bends over, puts one knee on his sled, kick-starts himself with the back leg as though propelling a skateboard and disappears into the forest.

Ahhh, we all say. Of course.

The problem with this technique is that the width of my shin bone is approximately equivalent to the spaces between the wooden slats. While this neat interlocking of wood and bone serves to hold me snugly in place atop my sled, I am in a great deal of pain by the time I round the second or third bend.

To my right, a sled speeds past me. It's another boy, this one on his belly with his shins sticking up in the air. What I failed to realize about that first boy is that once he achieved an acceptable speed, sometime around the first turn, he flung both feet out behind himself and flopped down on his stomach. As any kid knows to do.

I resolve to try this method but am held back by the sudden realization that I have no idea how to steer. The sleds of my youth had a movable piece on the front, like a ram's horns, that could be wrenched one way or the other with your feet or hands. This one has nothing like that. I might as well be riding a rocking chair.

I have no idea what to do.

Something is amiss when you have to be told how to slide downhill on a sled. Something in the adult brain atrophies over time. We've spent too much time considering options, weighing pros and cons, writing proposals, holding meetings, taking lessons. We've forgotten how to simply sally forth and do something. So I push off again and, once I've built up some speed, belly-flop onto the sled.

Some sort of instinct takes over, and I find myself banking turns in spite of myself. I lean to the side and drag one mitten in the snow like a rudder. Fortunately, the learning curve is steeper than the slope, and I manage to maneuver a veritable EKG of turns without ramming my fellow sledders or launching myself over the edge of the track. I'm flying, banking turns like an airplane, grinning like a 5-year-old.

The end of the sled run feeds directly into the narrow streets of the upper fringes of Davos. I keep on sledding, past parked cars and elderly couples walking arm in arm in the snow. Nobody seems surprised to see an adult sledding down the middle of the road. Snow makes children of us all; the people of Davos know it better than most.