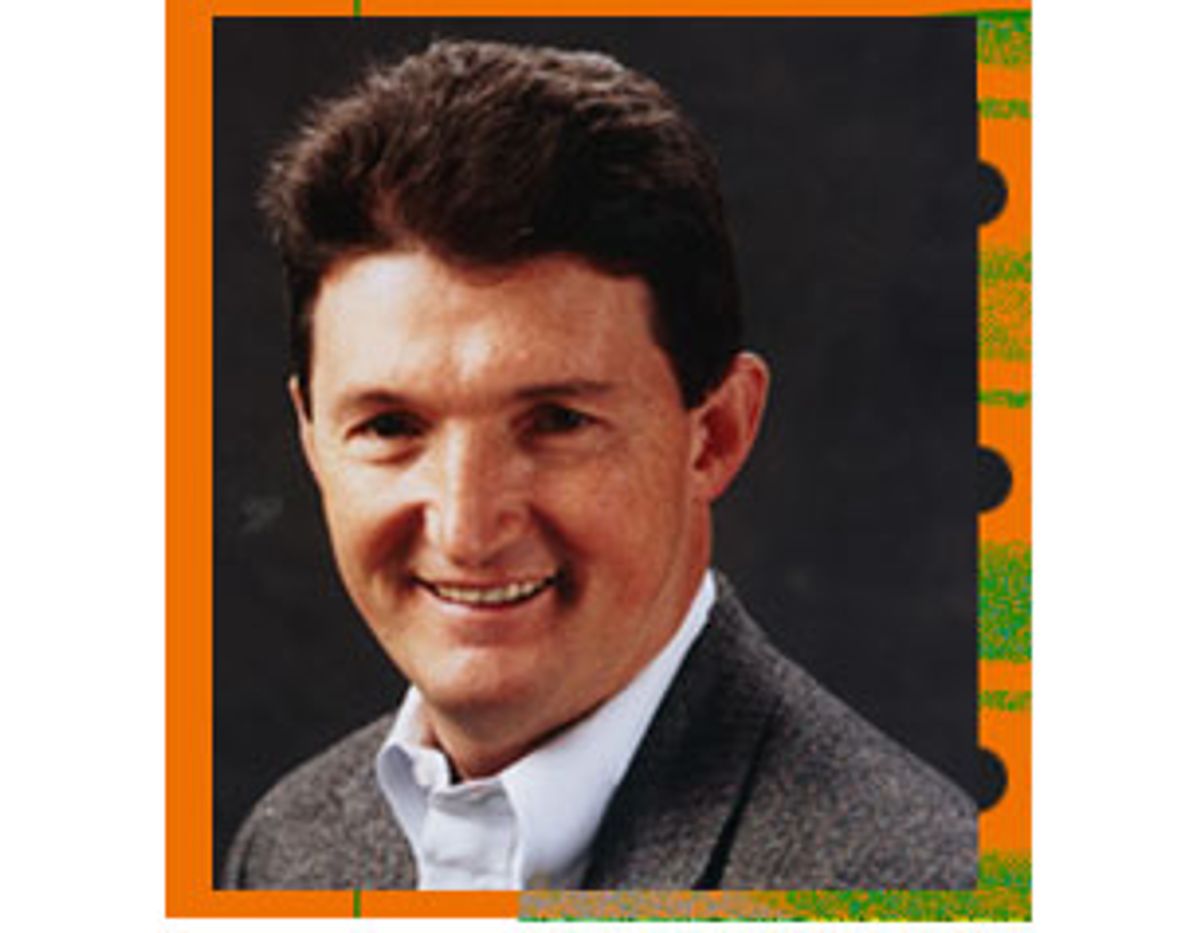 Bob Davis has the persistent and unembarrassed lock-stare of a skilled salesman, who will not once in the course of a conversation offer you the opportunity to say no. The chief executive of Lycos manages to be relaxed and intense at the same time, lounging on a sofa in his Waltham, Mass., office, surrounded by trophies representing successful acquisitions and investments -- pristine baseball caps from Tripod, Wired Digital, PlanetAll.

Davis, a native of Boston's working-class Dorchester neighborhood, began his career as a salesman for General Electric before moving on to Wang Laboratories, where he hawked minicomputers to big companies. In 1995, Davis was hired by venture capital firm CMGI @ventures to shepherd to market a Web search technology developed at Carnegie Mellon University.

Davis, Employee No. 1 at Lycos, had never even used e-mail before taking the job, but he quickly acclimated to the emerging world of the Web and began building the Lycos organization, with a strong focus on ad sales. Ten months later, he and CMGI had taken Lycos public, in what was at the time the fastest NASDAQ initial offering in history.

Beginning in January 1998, Lycos kicked off an acquisition spree to expand its reach -- the percentage of the total Internet audience that visits the site -- by purchasing Tripod, a college-oriented online community. After acquisitions of sites like WhoWhere, MailCity, Quote.com and Gamesville, Lycos' reach stands at 45.1 percent (compared to Yahoo's 64.7 percent), and its collection of properties attracts about 30 million visitors a month, putting it behind only America Online, Yahoo and Microsoft.

How do you define Lycos' strategy, circa January 2000?

Our goal in life is to be the most visited online destination in the world. The way we go about accomplishing that is by building a highly differentiated network. You think about where Lycos was two years ago, and we were one of many. We had a search engine, and that was our claim to fame. We were very ill-funded. Lycos had $1.25 million of total working capital, ever, prior to going public [in 1996].

We knew what we had to do. For us, job No. 1 was to establish [audience] reach. And we had a maniacal passion to building reach. It was the only way we could break from the pack. And it was also available, and I didn't believe it would be available for very long.

So we went out and built it. We put ourselves in the pack, as one of the leaders. You have Microsoft and AOL and Yahoo and us. Beyond us, it's a long way off to someone who has reach and really matters.

In April of last year, you pulled ahead of Yahoo. But when you look at the numbers now, they're ahead, and you're ranked fourth. What happened?

Well, Yahoo went off and acquired GeoCities and Broadcast.com.

When you walk into this building, there's a big newspaper article taped to the reception desk that says "Lycos beats Yahoo." Is there some danger in fixating on them, in that you make it a Coke vs. Pepsi thing?

Well, both Coke and Pepsi are pretty good companies. We want to be Coke. We've acquired tremendous amounts of reach. It never hurts to have more, but reach is less the objective now. Where we have a lot of opportunity now is to keep users in the site longer.

When people talk about branding, they talk about two models. There's the Lycos model, of keeping brands like Wired Digital and WhoWhere and Tripod, and the Yahoo model, of acquiring companies and then renaming them Yahoo mail and Yahoo stock quotes and Yahoo homepages. Do you think that your approach is still a valid way to go?

I think it's the only way to go. A multibrand model dominates traditional media. Look at the leaders. Disney operates maybe 30 brands. Time Warner operates probably 60 brands. All of the leading media companies operate a number of products. Why? Because [you] can take individual interest types, segment them -- either demographically or by interest -- and package that and sell it to an advertiser.

A [single] brand eventually saturates. It can't continue to build. I believe very strongly that that is Yahoo's Achilles' heel. They're a great company. They've executed in the marketplace extremely well. But sooner or later, a mono brand just doesn't work. It can't stand for everything for everybody.

The principal objective is [repeat] traffic and duration of time on site. In the past, you measured your success with Lycos based on how quickly you left. "Found it. First search result. See ya. Thanks." That choice is OK. We just want to make sure that more of the choices are us. So we're building deeper vertical content across the network. You can use the searching and navigation capabilities of Lycos, but also get depth of content. What we've been adding -- Wired News, Gamesville.com, Quote.com -- is all rich, vertical content.

I don't want to beat the Yahoo-Lycos comparisons to death, but it seems like with their market cap, they're in a much better position to go look at that top 50 or top 100, and acquire whoever they want.

They surely are. But their strategy thus far is this single-brand strategy. And it eventually breaks; it has in every other medium. After that, there's a lot of heavy lifting. We've had two years of experience operating a network with multiple brands. There's all sorts of things it involves: egos, products, operations. We have a 24- to 30-month head start over them, if they're going to adopt this approach.

Last year, you started Lycos Ventures to invest in Internet start-ups. How has that been going?

There are really two businesses we have. One is Lycos Ventures, and one is Lycos Incubator. Lycos Ventures is a hybrid of traditional venture capital and traditional strategic investment operations. We use [our capital and the] capital of others, like Paul Allen and Sumitomo and Bear Stearns -- a $75 million fund -- and we invest it solely in businesses that have strategic value to the Lycos network. Look at LifeMinders.com, our first investment. That will help us learn about direct marketing and build a direct marketing database. It gives us a voice in those companies, a level of influence, a board seat, some technology that can be helpful for us and some financial gain as well. We've invested in about half a dozen companies so far.

Lycos Incubator is a similar concept, but for seed-stage ideas only. That is just off the ground. We'll give people office space here. It will be very selective. There are ideas here within the company that would benefit from being outside the corporate structure, both from a standpoint of financing -- taking them off the P&L, and being just a minority investor -- and focusing on just the concept. And there will be ideas that will come through the universities here.

One of the last times that Lycos showed up in the news every day was with the USA Networks acquisition, which wound up falling through. What did you learn from that whole experience?

I learned a lot. Where do I start? I think I learned how difficult it is to bring together traditional models and new models. That's really what USA was all about -- merging traditional media and new media. Trying to do it as rapidly as we did was difficult. Sometimes pioneers claim new territory, and other times they wind up with a few arrows in their backs. We wound up with a few arrows.

Do you think it was just a temporary hit to the company?

Yes. I think that's ancient history. And I would also add, in a very real way, Lycos came out of that as a much stronger company. We were in the Wall Street Journal every day. Everywhere you went, consumers knew the Lycos brand. We ended up with a lot of visibility.

I would imagine that was your first serious encounter with how the Street can have a huge impact on what you do here every day.

Judging the markets is important. Much as I thought -- and think -- it was a smart deal, I clearly misjudged the market's reaction to that transaction.

When I talk to people in the Internet community, they always say that one of Lycos' big strengths is in rich media. How do you see that playing out, as more people get broadband access?

Rich media is important to us. We have a lot of products now, and many more on the way. I think we have probably the best rich media service on the Web today. We have an MP3 player, with Sonique, which still captures 75,000 downloads a day.

But it's evolutionary, not revolutionary. I don't think we wake up one day and say high-speed access has taken over the world. Gradually, more people will use these services. If we do our job right, as this evolution takes place, we'll be at the epicenter. In reality, I still think we're four or five years away from high-speed access being really meaningful.

A lot more content. We'll continue the acquisitions. We'll add verticals. We want to give people more reasons to stay longer. Tighter integration among the brands -- not to take away from the individuality of any of the brands, but to circulate the consumer from brand to brand to brand, the same way a television network does with its programming. And international expansion: We'll be in eight more countries by the end of this quarter.

What about being here in Waltham? A piece in the Wall Street Journal last year was evaluating the portals, and for Lycos, they called its East Coast location a disadvantage.

That's crazy. If anything, I would say it's an advantage. It's great to be a big fish in a big pond. Having said that, we're neither East Coast nor West Coast. We're a bicoastal company. In fact, we have as many employees in California as we do in Massachusetts. You draw from the talent pool on both coasts, and capture the buzz in both communities.

When you look at the front pages of all of the search sites nowadays, there's a lot of similarity in what you see.

It seems like the portals or hubs have been developing so many other features and offerings that they've gotten away from improving the core search functionality. What's the importance of search?

Very important. We have our own search technology, but we'll use best-of-breed from many others. Right now, we have Direct Hit, Inktomi and Fast that provide pieces of our search for both HotBot and Lycos, and we'll continue to do that. Trying to recognize what a user is looking for when they type in a very generic term, like "sports," isn't easy. This year, one of our objectives is to index significantly more, but improve our relevancy. And we have some exciting new developments related to search, so stay tuned.

What are the two or three big challenges in front of you right now?

Ensuring that every hour of every day we maintain this fanatical devotion to the customer. Lycos is a very good product -- such a better product than a year ago. It has been that obsession that got us there. Keeping that intensity and devotion in place is way up on the list for me.

And focus. What we're trying to do this year is retain traffic. We're already getting it. We're trying to keep it in the site. And you can only do that with a good experience. There are a lot of things every day that can distract us. There's no shortage of opportunity, no shortage of companies knocking on our door, saying, "Let's do a deal." Understanding what can make a difference and what can't is never easy.