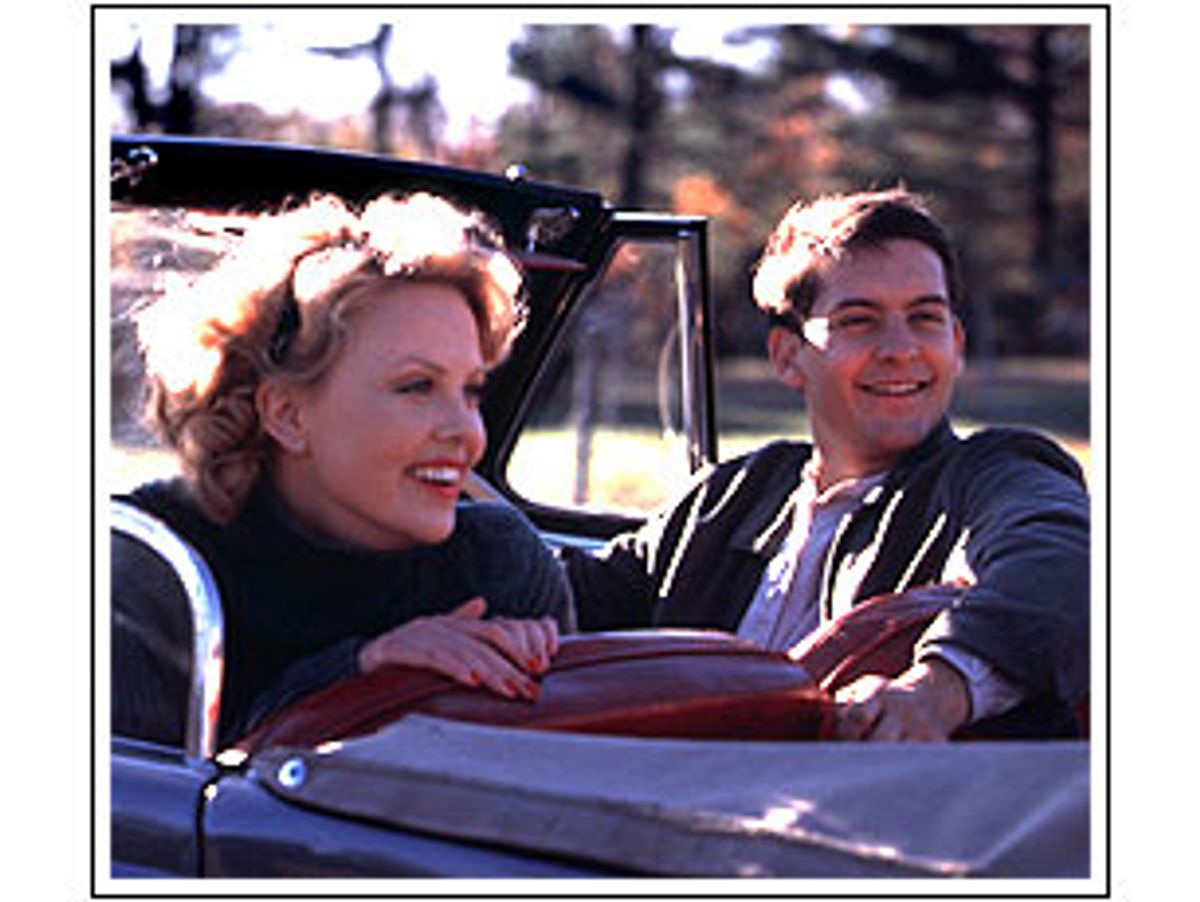 Simple movies are very difficult to make. For all that we yearn to see something exciting and different, for all the times we cheer innovative and original filmmaking, the old-fashioned well-crafted drama -- a picture that's emotionally straightforward yet compelling, with a story that leaves you wondering what will happen next -- is an increasingly rare creature. In that vein, Lasse Hallstrvm's "The Cider House Rules" breaks all the rules simply by following them. Its simplicity is almost shocking. What makes it work is that Hallstrvm makes choices that are traditional in a sense, and yet never exactly obvious. The picture moves with a grace and clarity that never wobbles into predictability. And no one in the ensemble of actors ever missteps: There's nothing overdone or overwrought.

Just about every moment rings true -- and this is a movie that takes place partly in a home for orphans, a recipe for saccharine formula if there ever was one. But if "The Cider House Rules" is traditional in terms of its craftsmanship, thematically it's beautifully modern. This isn't a movie where lovers are required to be mates for life before they're allowed to have sex. People experiment, and sometimes they misstep. Among the old and the young, spontaneous love and passion are allowed for, as well as mistakes: "The Cider House Rules" is unabashedly pro-choice, and unapologetic when the choice is abortion, acknowledging with a rare flintiness that for a woman, pregnancy does not always amount to a gift. "The Cider House Rules" isn't a complicated moral tale, designed to allow you to make your own decision. It wears its view pretty plainly, without shoving it down our throats. Its resoluteness is part of what makes it so refreshing.

Set in the early 1940s, "The Cider House Rules" -- which John Irving adapted beautifully from his own novel -- is a smart, sensitive exploration of the same territory mined in the sentimental Frank Capra favorite "It's a Wonderful Life": Is the safe and familiar home territory preferable to the big wide world?

But unlike Capra's movie, "The Cider House Rules" doesn't approach the outside world with trepidation, or make it look evil and scary. It's not a bad place -- it's just another one. Homer Wells (Tobey Maguire) is a teenage orphan who's never known life outside the Maine orphanage, St. Cloud's, where he was born. A bright, intuitive kid, he's been groomed by the orphanage's resident doctor, Wilbur Larch (Michael Caine) to deliver babies; he's far less enthusiastic about learning to abort them, a procedure whose importance Larch defends to the hilt, despite the fact that it's illegal.

When a beautiful young girl in trouble, Candy (Charlize Theron), arrives at the orphanage, escorted by her dashing, affable boyfriend Wally (Paul Rudd), a fighter pilot home on leave, Homer seizes the opportunity to hitch a ride out of town with them. It's his first chance to escape from St. Cloud's, his only way of grabbing the necessary chance to find out what life on the outside is like. He seizes it, even though it breaks crusty old Larch's heart, not to mention the hearts of the many orphans (among them the chronically ill Fuzzy) who've come to rely not just on Homer's medical skills but on his steady good humor and limitless calm.

Homer's the kind of kid everybody likes, and away from home he falls in easily with a group of migrant apple pickers led by Mr. Rose (Delroy Lindo), learning the work and performing it cheerfully. He also starts to spend more time with Candy while Wally is away on duty, and the two realize they're falling in love. Homer is something of an innocent, but the way Maguire plays him, he's never a sap, and the distinction is crucial. His honest, open face registers everything up front. When Wally joshes with him, serving up a jokey little put-down, Homer's face falls momentarily: He's so serious-minded and sincere that he hasn't invited much teasing in his life, and it's a new experience for him.

At St. Cloud's, Homer is adored and admired by the legions of little kids who know deep down they'll never be adopted; he answers their funny little questions with unabashed straightforwardness, and the sly smile that plays around his lips betrays how much he enjoys them. But Maguire shows us everything that's stubborn and steely about Homer, too, without laying it on too thick. You catch it in the way his eyes just barely flicker when Dr. Larch matter-of-factly informs him how much the orphanage needs him, and how little the outside world has to offer. Homer's no pushover; he seems to realize that he never willamount to anything if he doesn't think for himself.

Maguire's delicately shaded performance has an extraordinary number of layers, and it sits right at the heart of "The Cider House Rules." And somehow, every other performance in the movie falls beautifully into place around it. Theron's Candy, with her apple cheeks and tousled blond curls, is the perfect picture of toughed-up innocence and fragility. Theron is perfect as one of those well-meaning girls who just doesn't know what she wants, who needs to try a little bit of everything before she can settle into a decision. Hallstrvm and cinematographer Oliver Stapleton (who gives the whole picture a soft-edged but refreshingly unsentimental '40s New England look) lavish Theron's beauty with the respect and attention it deserves: In the movie's central love scene, she's lit so that her skin looks like amber honey. She's not an object of desire but a woman wholly deserving of it.

The orphans, including Kieran Culkin as Buster, a tough but perceptive charge, and Erik Per Sullivan as the sickly, charmingly existential Fuzzy, are uniformly wonderful, sidestepping every pothole of pathetic cuteness that an orphan character might haplessly fall into. The R&B singer Erykah Badu, as Rose Rose, one of the migrant apple pickers, brings an almost effervescent lightness to her character, a young women who's laden with difficulties but not undone by them. And Delroy Lindo, in a subtly radiant performance, is representative of the movie's emotional honesty: His character is immediately likable, and yet we're asked to accept something about him that, in another movie, would mark him as a monster. But the movie doesn't turn away from him, and neither can we.

In bringing Irving's story to the screen, Hallstrvm is more interested in showing us every angle of his characters' humanity than he is in making facile pronouncements about them. That's true especially of Caine's Dr. Larch. Larch's willingness to perform abortions stems from concern for the young women who might otherwise die at the hands of back-alley butchers. It's clear he'd rather not perform them in a perfect world; in the one he lives in, he sees it as his duty. But his matter-of-fact love for his living charges is the flip side of that sad responsibility. It's as if the pleasure he gets from them -- from reading them Dickens before bedtime to showing them a movie on "movie night" (it's always "King Kong") -- is his reward for the more difficult aspects of his job. In that respect, "The Cider House Rules" is pro-life in the only genuine sense of the term.

Caine's performance is so prickly, so burnt-crisp around the edges, and so direct that it's deeply touching without ever being cloying. Each night, before he turns out the lights on his ward full of orphans, he recites the same little speech to them: "Good night, you princes of Maine, you kings of New England." The words are his way of declaring to them that no matter how worthless they may look to the rest of the world, they're royalty to him, and he says them with such cantankerous affection that we -- just like the little boys huddled under the covers -- sometimes can't help giggling a little at them.

That they're spoken by a rufty-tufty actor like Caine, a journeyman who's known for taking lousy roles as well as good ones simply to keep working, makes them mean even more: He's not just paying lip service. Caine's wonderfully polished roughness stands as a symbol for the way "The Cider House Rules" follows every rule in the book and still has the capacity to surprise us. Deeply enjoyable, well-crafted and sensibly conventional, it's not the kind of movie you see every day. You could almost call it subversive.