What happened when I crossed the gender barrier. 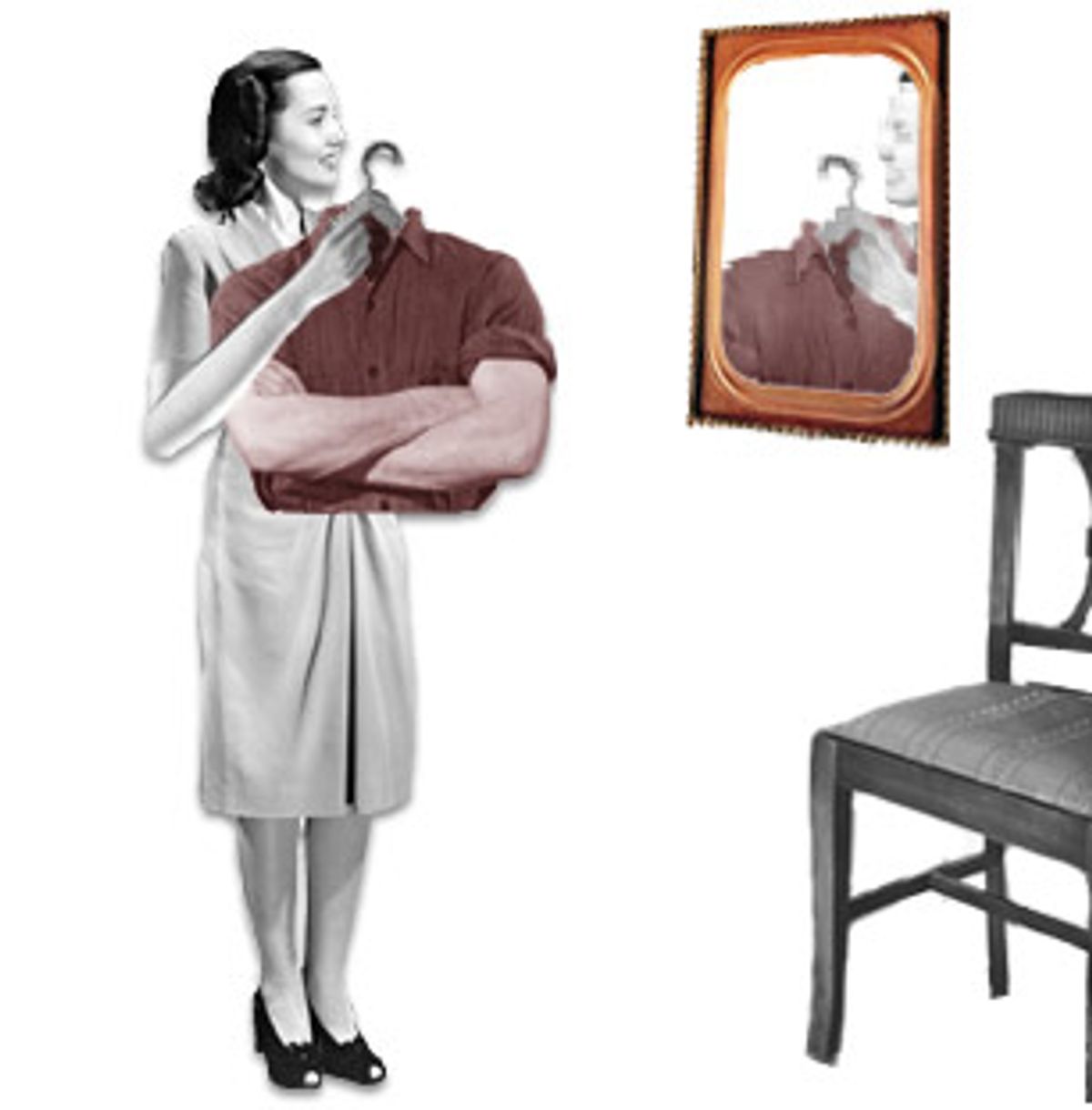 To transform myself into a man, I employed the Mr. Potato Head theory of gender. I removed the female accessories -- lipstick, eyeliner, fluffed hair, curves -- and built up from there. I figured adding the other set of accessories would make me a man visually, and then performance would flow from costume.

A night on the town would test the Mr. Potato Head theory. Would I feel like the new sex I was impersonating, or just the same as always? My "natural" state has felt as much male as female: From age 7 to 10, I was often "read" as a boy. Tall, skinny and short-haired, I constantly heard, "Wrong bathroom, kid" and "Here's your change, sir."

And I thought spending a night out as a man would let me explore firsthand the malleability of gender. I decided to go to gay bars to sneak a look at a sexual lifestyle closed to me; plus, I thought it might be easier to pass as gay than straight.

Rather than create a character, I wanted to follow wherever my appearance and people's reactions to it led. My Frankenmale needed a firmer guiding hand though, because he kept sliding all over the gay-straight continuum. Unlike a true transgender, I had no man trapped in my female body to anchor my masculinity.

I didn't shower or use moisturizer that day. I put on Howlin' Wolf and cut my fingernails short and square over the kitchen table, just to be gross. I pulled my hair into a tight ponytail; I applied stubble make-up with a stipple brush around my jawline and between my eyebrows.

I'd bought a fake mustache, but it made me look like the Brawny Paper Towel guy's wimpy cousin. Instead I cut it into small sideburns and a soul patch, funk chunk, whatever you call a rectangle of hair just below the lower lip. I pasted a few wisps of chest hair at the base of my neck.

I borrowed clothes from my friends Peter and Sam, the couple who'd agreed to escort me to the bars. I wrapped my breasts in an Ace bandage, put on Peter's T-shirt, then a generic white button-up shirt of my own. I pinned a dishtowel inside the waistband of Sam's jeans, erasing my waistline and camouflaging my girl butt. Finally, I fished a sock out of my dirty laundry, pinned it and hung it on the left. I scowled at myself and pumped my new straight hips to "Back Door Man."

As I looked in the mirror, I saw a slim, good-looking guy about 10 years younger than I am. Now, he needed a name. I wanted one that was gender-neutral and suggested Robin. "Too faggy," Peter said, and we settled on Alex. After checking me out, my friends concluded that Alex was a nerdy but hip straight man.

Peter, Sam and I began our evening with drinks at our friend Jeff's house. Jeff sized me up: "You're a college student, no, you're in grad school in some arts program. You're straight, but you're experimenting, and you'd like to get a blow job before the evening's out."

I hadn't expected to turn out so hetero. I ogle and assess men with Peter and Sam and Jeff all the time. Plus, I'd thought that gay maleness might fall on a continuum between femaleness and hetero maleness, so that passing as a gay man would be easier than passing as straight. But as I tried on ways of walking and talking and sitting with my legs open, "gay man" felt like another layer of affectation.

I was terrified of getting carded, but we sailed right into the Omega and huddled at the end of the bar. Men stared each other down grimly through the smoke. "Somebody's checking you out," Sam whispered, and I glanced over. The man's smirk was as mysterious as the Mona Lisa's -- was he suspecting or ogling me? I realized I was too afraid to strike up a conversation with a stranger, because my voice got high when I yelled over the music. I felt like the Little Mermaid after she'd traded her voice for her legs.

Many women who cross-dress describe new feelings of safety and power and freedom to occupy more space, but I wasn't that confident about my "act," so I retreated further into myself. In the Omega I felt more like Brandon Teena than like a man. The fear of discovery outweighed the male freedom I'd felt as a little kid who wasn't trying to fool anyone.

Sam argues that gay sex makes more sense, because men and women need to negotiate so much more: How much seduction, how much foreplay, how much afterglow and the whole monogamy trip. (Judging from the video, men also give better blow jobs -- unless that was some trick collapsing prosthetic.) I saw his point in this room. The mating rituals seemed more direct, friendlier. It was a little frustrating to be stuck as a voyeur.

I was able to embrace my gay maleness once we got to Badlands, a huge thumping dance club. Acres of buff young men, about a third of them shirtless, pumped their hips and feathered their hands in the air dramatically to the mechanical disco. I could slave to the beat and diva vocals and the strobe light and sweaty pecs without needing to talk to anyone.

Peter danced with me for a while, but then left me out on the floor alone. I modified my hips a little, less roll and more thrust, but otherwise I just grooved. I've danced at gay clubs before, but it was a lot more fun to be part of it and not invisible or an intruder.

The couples were very fluid, unyoked by possessiveness. I leered coolly at a shirtless, gym-cut pair, one black, one white, for a while. They watched me watching, and then the black guy danced into my space bubble, waving his muscular back and butt very close to me. I knew better than to hump him with my sock, but I wondered, "Am I allowed to touch?" A tall gorgeous boy in a red shirt also moved away from his partner to right in front of me. I was afraid to look up into his eyes, because my sideburns and soul patch had begun to slip. So I stared at his chest and his crotch and grinded as close as I dared.

I finally brushed my hands down both of their backs at the same time -- and regretted it immediately. I felt like a clueless American in a fanny pack harassing the natives on my package vacation. I also realized I'd better not start anything I couldn't finish, because if they copped a feel back, they'd grab dish towel or sock or a tiny face-wig. They neither objected nor escalated, just danced with me for a while longer, then drifted away.

Peter and Sam and I left the club just as I sweated the last of my facial hair off. I still had my stubble and my curveless body and my attitude, though, so I made a 4 a.m. stop alone at a diner for one last experiment. I ordered gruffly, sat with legs spread and took some notes on the evening while I waited for my breakfast. I gave the cashier my manliest scowl when I paid; none of that girly pleaser crap. My Mr. Potato Head sideburns must have carried more of my manhood than I thought, though. As she handed me silver and pennies, she smiled and said, "Here's your change, ma'am."